Buy The Freakin Dip, Hold on For Dear Life!

China FUD that exchanges are being told to stop funding Bitcoin purchases in China, and mining being shutdown has caused mass panic in the crypto currency space.  But slow your roll and think about it a minute!  China is authoritarian communism.  They banned facebook and twitter as well.  Those stocks have done extremely well without China.  Getting banned in China is a coming of age for a new technology.  Look at this chart about the rate of adoption for crypto currency, especially Bitcoin, compared to the internet: 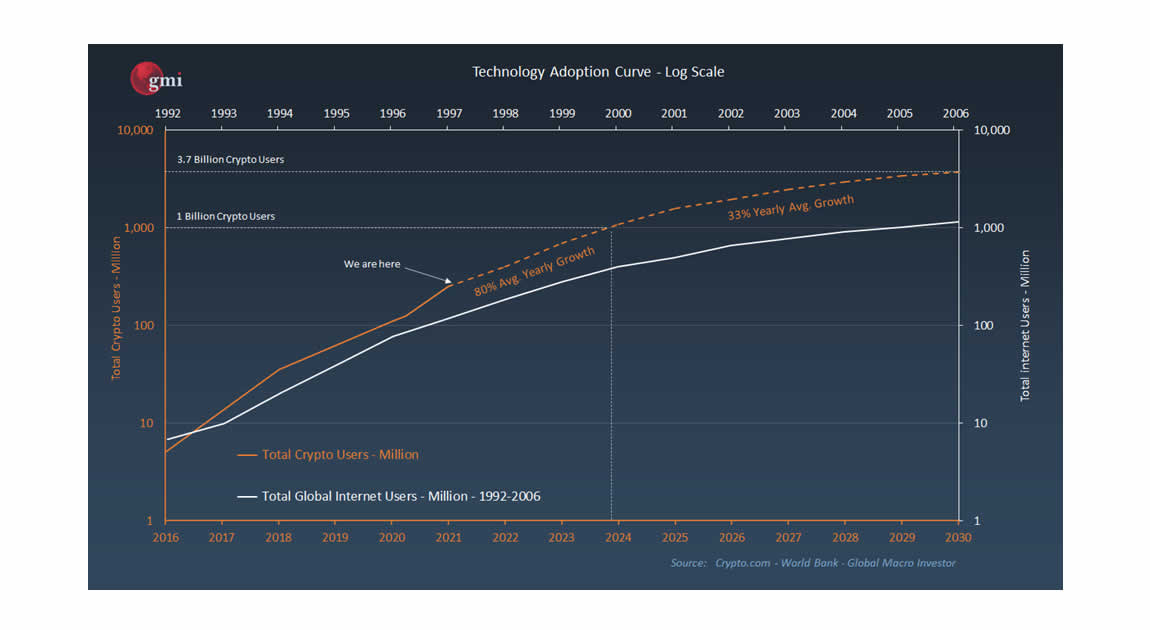 Thanks to Real Vision for this chart.  The fact that for 13 years, Bitcoin has outpaced the internet in terms of adoption should be a clue that Bitcoin and the blockchain are not going anywhere.  Bitcoin miners (90%) moving out of China is great news as well.  China miners were reliant on coal based power exclusively.  Bitcoin was 73% to 74% renewable and waste gas power.  Now it will be a much higher percentage.  It will take a month or more for the mining equipment to get back online in the new locations worldwide.  However, the difficulty adjustment will kick in on June 30th.  The hashrate will recover throughout July.  Neutral ATM sees this as a fantastic bounce off point for a major Bitcoin recovery rally in August and through the end of 2021.  Does this mean the bull market will last longer, into 2022?  Maybe, we have to wait and see.  Keep a low time preference, a low value on time.  It does’nt matter how long it takes.  Do your own research and develop a sound thesis.  Stick to that, long term.  Ours is that Bitcoin is the greatest assymetric bet in a generation.  It is outpacing tech stocks, so probably 2 generations.  Time will tell.

Here is the fear and greed index, it was 28 yesterday.  This is the lowest we have seen: 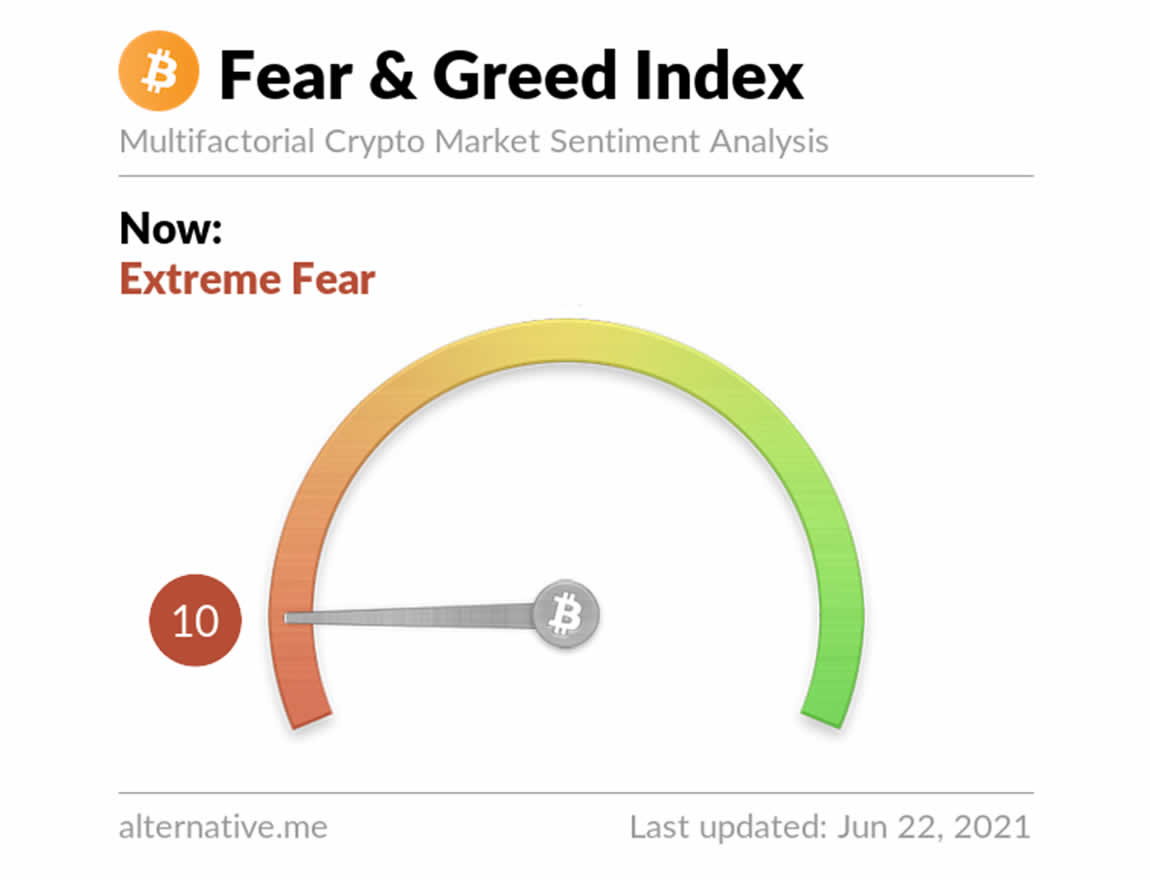 Below is the Bitcoin price trend in terms of 4 year over year returns.  It is way below the regression trend line now.  Bitcoin has already had a double top bull run (2013).  We still see strong similarities to 2013, and fully expect a rally, in August.  Could be July, we expect August.  Yet, time is irrelevant to us because our time preference is so low.  Here is the chart: 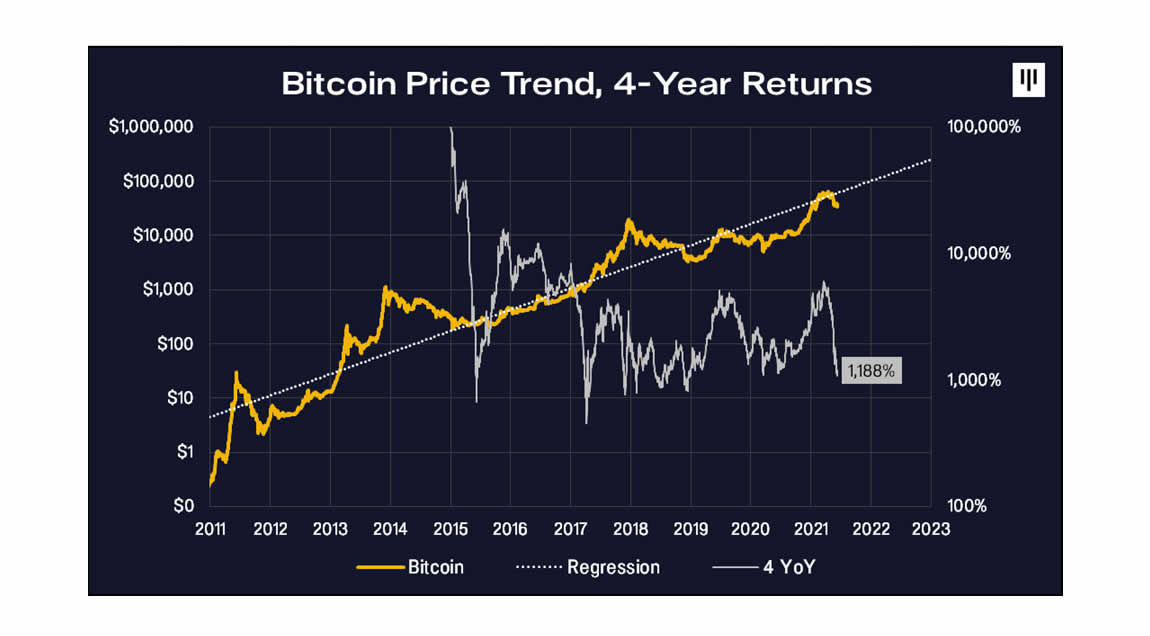 Thanks to Dan Moorehead for this chart.  Bitcoin is undervalued at these levels today!  Clearly, media FUD gets in the way.  We even found out about a single investor who opened up a $1 billion Bitcoin short position on Friday.  They closed it this morning or perhaps late last night.  25,000 Bitcoin was the position.  Could that be mining pools from China shorting their Bitcoin before they open up in another country and buy back cheaper?  It stands to reason but there is no way to know.  Neutral ATM got lucky and had delays in buying yesterday, and got it a good bit cheaper this morning, very early!  It is fun to fall down a manhole and land on a nice couch, so to speak.  We got lucky this morning.  Hopefully we are right about this Bitcoin bounce.  It could still go lower and we are not saying it won’t.  Longterm, we still see a bull run going into continuation mode and a rally ensueing.  If that does not happen and we have turned a corner the longer term thesis still holds.  It may be disappointing, but we own Bitcoin to separate money from state.  China Fud simply reinforces that conviction.  It is a badge of honor for a freedom movement like Bitcoin to get totally banned in China!  That much we cannot back down from.  El Salvador is likely to get joined by Mexico, Paraguay and several other countries in Latin America or Africa, we have already announced in previous blogs.  Look for Chinese exchanges to stop enforcing bans on Bitcoin once the price rallies.  This is the fourth time China has tried to ban Bitcoin.  The previous three did NOT work.  Why will it be any different this time?  One difference worth noting is the mining ban.  Bitcoin does not need China to influence the mining industry.  Relieving that stress and tension is a good, good thing!  Below is a fun, rainbow chart.  It is half joking, yet as you can see.  Bitcoin is a buy at these levels.  Keep a level head, there is going to be a bounce before too long, view chart.