Bitcoin may be THE answer to this looming Sovereign Debt Crisis

Billions in government bonds were bought up by the Bank of Japan, last week!  That was to stave off a 10 year bond collapse.  However, now the 10 year bond in Japan is up from 25 bps to 50 bps.  Today, Bank of Japan will have to buy billions more of bonds, and rates are climbing.  No one is buying these bonds, other than Bank of Japan.  Therefore, 10 year yields have shot up.  Bank of Japan has to print Yen to buy these bonds.  The buying power of the Yen is falling, fast!  Could this lead to hyperinflation in Japan?  Possibly.  Here is the Japan 10 year bond yield chart: 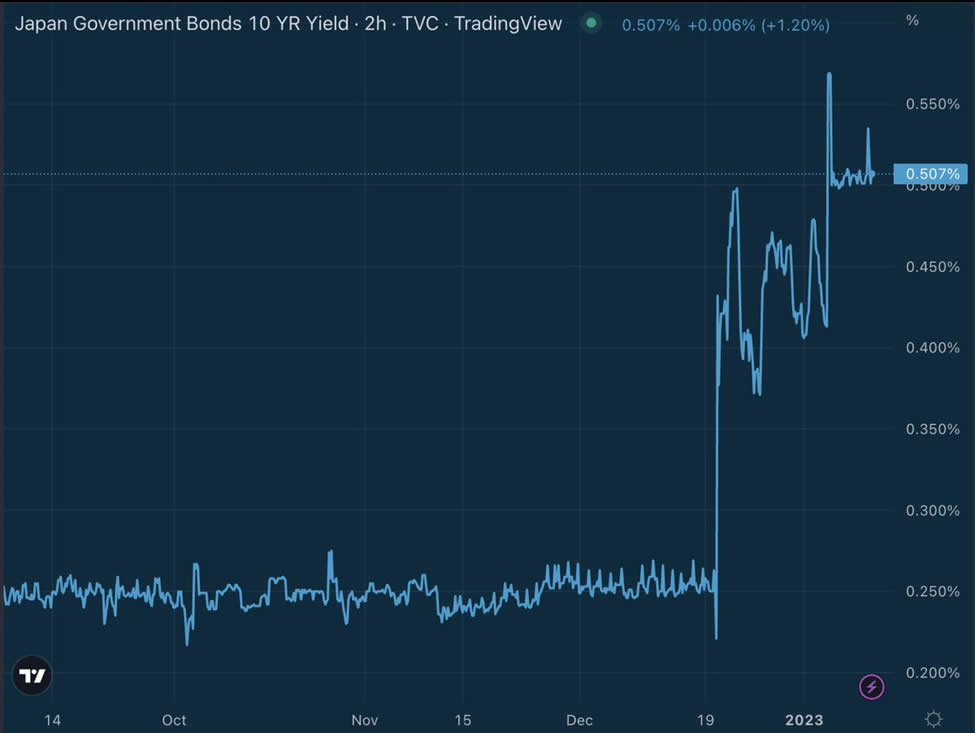 This sovereign debt crisis could get kicked off by Japan.  This could easily be the case in 2023.  Here is a depiction of the Bank of Japan trying to sell bonds in this environment: 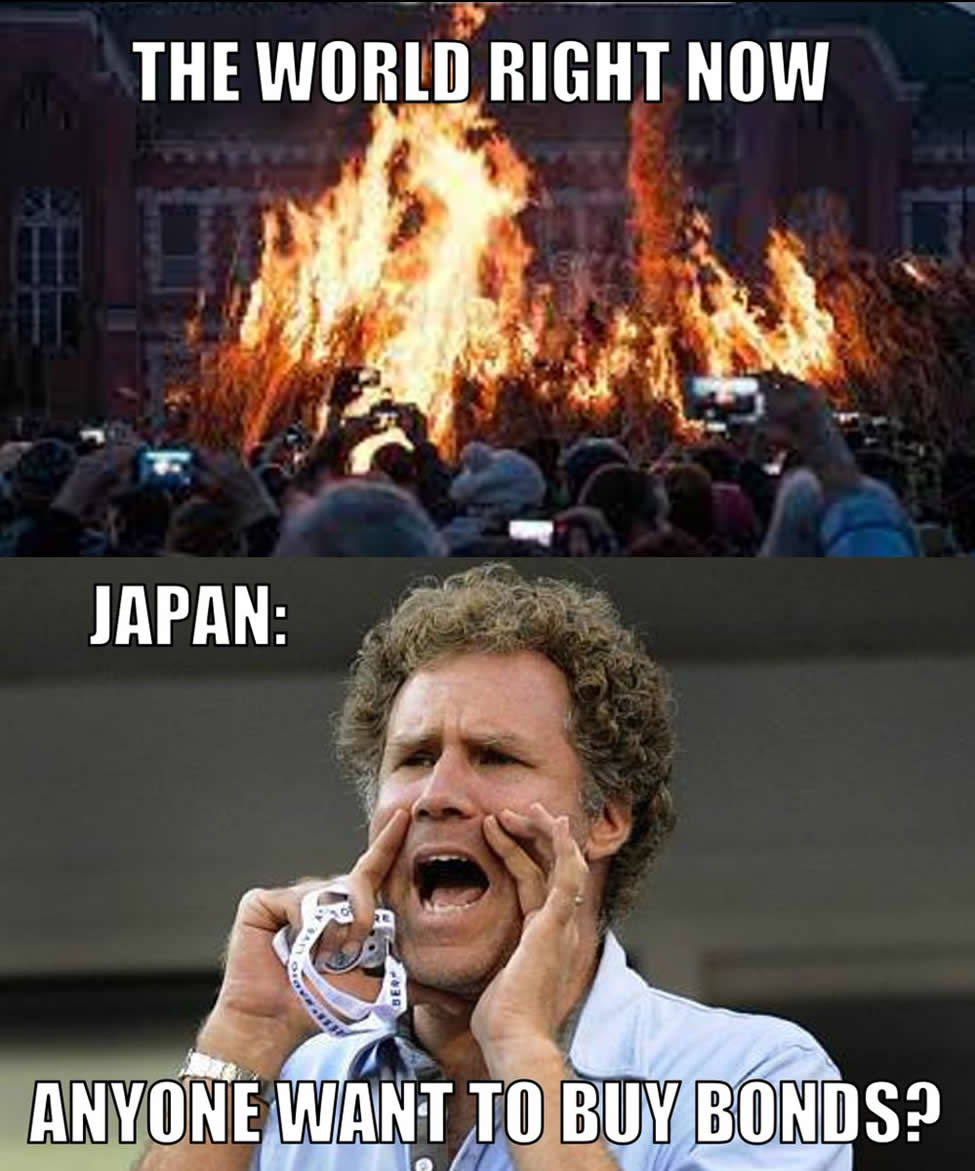 In December Bank of Japan said they would buy 9 Trillion Yen of government bonds per month for the first quarter, 2023.  They bought 4.6 trillion yen worth of government bonds in a single day.  The Japanese bond market will collapse, which could lead, in fact, to hyperinflation in Japan.  As governments across the world have print fiat currency to buy back there own bonds to stave off a bond market collapse.  This is the road to serfdom!  Hyperinflation.  This is the sovereign debt crisis we have been talking about in blogs for six months now.

FED: NET INTEREST COSTS INCREASED TO $102.4 BILLION IN 2022, UP FROM $5.7 BILLION IN 2021!  That should be ringing alarm bells! What is happening in Japan will start happening in Europe, and then spread from there.  It will take a decade to play out.

How long will the stock market be able to ignore Bank of Japan’s black swan growing by the day?  10 year JGB (Japan Government Bond) broke 0.5% already.  BOJ is fighting a battle that it cannot win, a war already lost.  Something has to collapse, either the JPY (Yen) or the Japanese Financial System.  Either will be a massive systemic shock.

Another chart to watch is the VIX (volatility index), It’s ready to blow: 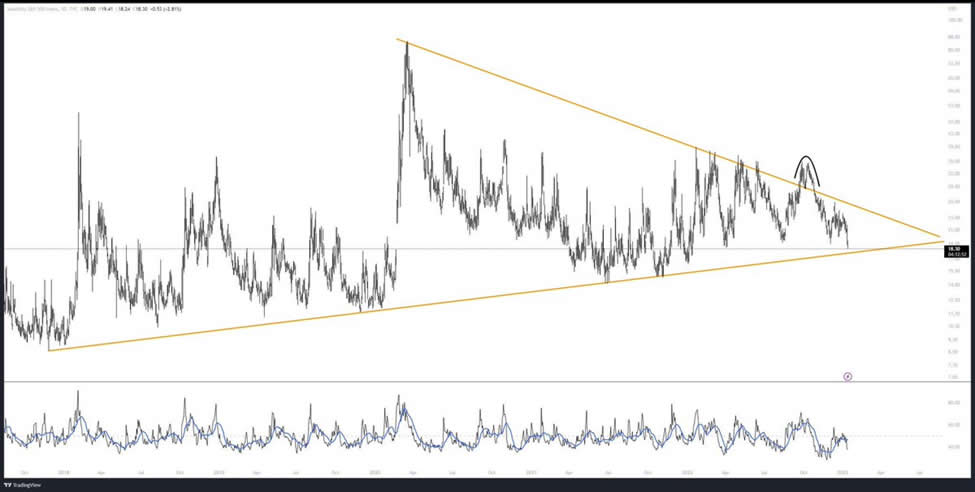 So Japanese government bonds, the Yen, and the VIX are all close to blowing out.  The Yen would drop lower, which means, stocks would react negatively.  This could also be the catalyst to help Bitcoin.  At some point, likely in 2024-2025, Bitcoin will completely detether from stocks altogether.

Steve Courtney shows in this chart below, the stochastic RSI for Bitcoin has crossed bullish since November and when the RSI surpasses 20, the bullmarket will be over.  With the Stochastic RSI on a 2 week chart being this strong, 12 straight green days in Bitcoin.  First time since 2013.  There is a trend reversal beginning to happen in Bitcoin!  Here is the chart below:

In this next chart, Steve Courtney shows the red trend line, which has been down trend oriented, since November 2021:

Yet the Bitcoin price (geen line), has blown right through this 14 month old trend line.  Steve expects Bitcoin to reach $25,000.  It may stall and drop some after that, but this has been a nice run, to get Bitcoin out of this down trend.  2023 won’t be the electric bull run year that we expect 2024 to be, and into early 2025.  But it IS nice to see this break out after 14 months of PAIN!  Now let’s see how this sovereign debt crisis upends stocks, and likely acts as a major catalyst to detether Bitcoin from stocks.  Bitcoin, Gold, and Silver will be the run to safety assets in 2023.  This will be a historic year, and Bitcoin could vary well surprise us.  We are remaining catiously optimistic.  We are not financial advisors and this is not financial advise.  Buy Bitcoin and hold it offline!

These are the sources for offline Bitcoin wallets and unchained capital for 401K rollovers.  Neutral ATM is doing all we can to help customers survive, and thrive in this environment.  That starts with getting the Bitcoin you invested in, offline, asap.