Bitcoin Cup & Handle, What Will Evergrande Debt Default do to Bitcoin?

A lot is going on at the present time regarding geopolitical and financial impacts for the 4th quarter 2021.  Bitcoin is still consolidating under $50K.  The outcome is undetermined.  However, there is comfort knowing that Bitcoin is rhythmic in that after every halving of the miner reward, there is a parabolic bull run.  In this next chart we can see, Bitcoin consolidated for 197 days during the 2013 bull run.  Right now, it has been 155 days since the April 15th ATH of $64,829.  Take heart Bitcoin investors.  The RSI (relative strength index) is still not above 56 and has started diving a little.  I know we have mentioned a beginning to parabolic price action in October.  It possibly could take into late October.  We keep repeating, patience is key.  Every bull market cycle lengthens.  That is also rhythmic with Bitcoin.  This cycle could drag out longer than 2013 or 2017.  See the chart below: 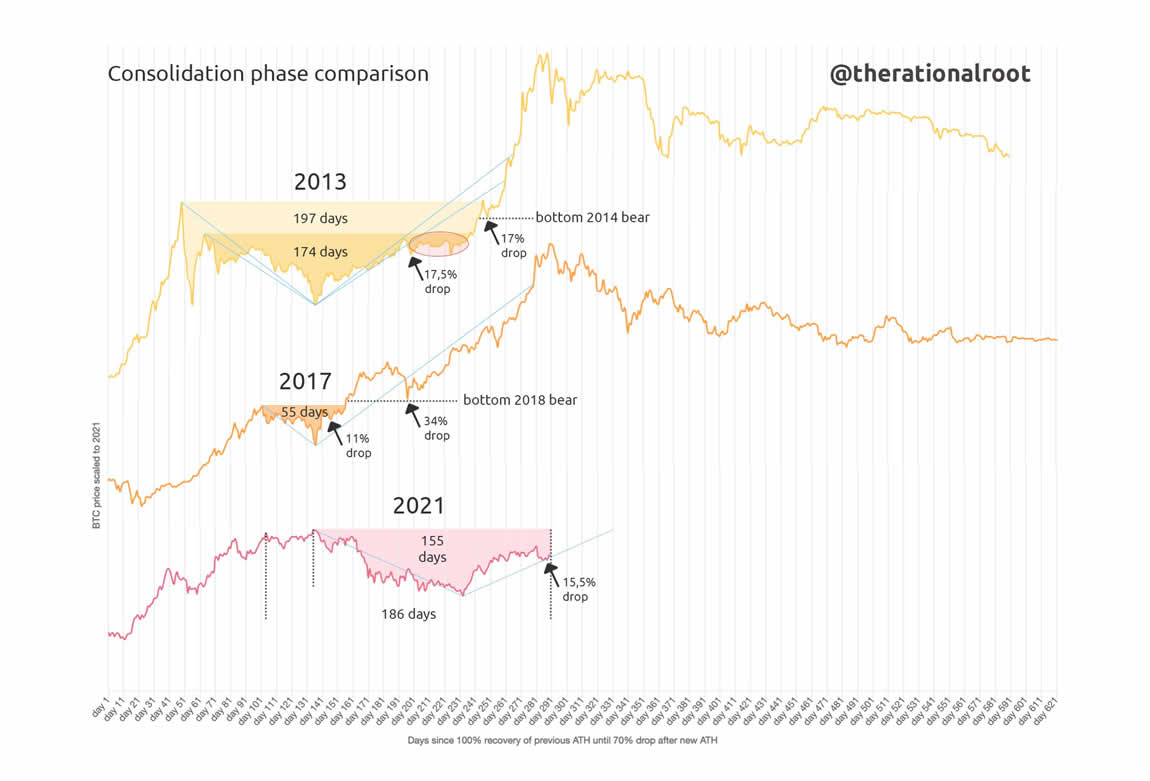 We still see a strong comparison with the 2013 double top bull run cycle.  This time it may be pulled out more horizontal, not as vertical.  Trust the supply demand inbalance Bitcoin creates after every halving.  Trust the algorithm.  Math never lies, Bitcoin is made of math!

In the below tweet, the finance minister of Zimbabwe is considering Bitcoin to lower remittance costs.  This was a major reason that El Salvador voted to make Bitcoin legal tender.  Same thing could happen in Zimbabwe.  That would make three nation states adopting Bitcoin if it happens.  El Salvador, Ukraine, and Zimbabwe.  Who will be next?  Panama, Venezuela?  Click here to view on Twitter.

The next tweet is a video of China Evergrande Group headquarters in Shenzhen, China.  Angry investors are protesting at the companies headquarters.  Evergrande has made public, it will default on loans beginning September 20th.  The debts they hold plus the value of the real estate portfolio equals $500Billion.  5 times the size of the Lehman Brothers bankruptcy in 2008.  What would this do to real estate prices worldwide?  Click here to view on Twitter.

There are many views on the ultimate significance of China Evergrande Group on global real estate.  The cracks are only beginning to form.  Meanwhile, Neutral ATM has written extensively on US issues which are related more low bond yields and reverse repo markets.  So China has real estate issues, overall.  The US has stock market and debt issues overall.
There are a lot of landmines to step on in the investing world.  Inflation is irrefutable at this point.  It is showing up everywhere.  Hedge with Bitcoin, the supply shock will turn Bitcoin parabolic in September, October, or worst case, in November.  We must preach patience, zoom out, look at the big picture.  Plenty of evidence exists pointing to Bitcoin.