Why the Price of Bitcoin Doesn’t Matter, Part 3

Below is an important article followed by a good chart demonstrating why the price of Bitcoin in a small window of time is irrelevant. The bitcoin blackhole effect article is long but worth the read, click here to view - 15 minute read.

Now recall that the cycle top in 2013 was $1,100, in 2017 was $19,783, and in 2021, it stands to reason it will be 10X the 2017 top since that one was nearly 20X the 2013 top.  So, again, Neutral ATM still stands pat on our $160K to $220K bull market cycle top prediction.  We will wait and see how it turns out.  There has been a lot of main stream media (fear, unbelief, denial) FUD, calling $51K the top this week.  We ignore MSM FUD completely.  Bitcoin is less than halfway to its cycle top right now.  It has only been 9 months and 1 week since the 2020 halving on May 11.  In every previous cycle,  the bull run has lasted 18 to 24 months AFTER the halving.  If that is true this time, and it is, Bitcoin has a long way to go.  The Bitcoin bull market is not built on emotions of speculators, it is built on supply and demand.  There will only ever be 21 Million Bitcoin produced.  Bitcoin is almost at $1trillion in market cap.  It will likely get to 50% of the Gold market cap of $9trillion and then double Gold’s market cap at the next bull market cycle in 2024 and 2025.  Thus, seeing Bitcoin double at faster and faster rates now, as demonstrated in the below chart, points to these numbers being closer to reality: 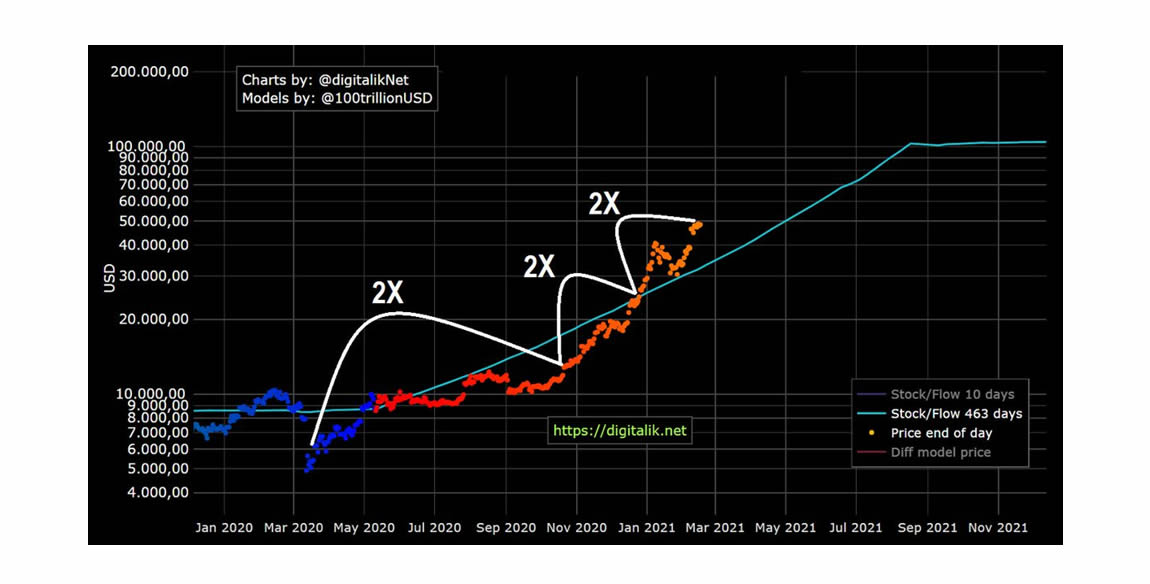 So if Bitcoin doubles again that will be $103K.  It took 8 weeks to double the last time, which means Bitcoin could break $100K by mid April.  Last week we summized that the 3rd quarter may be the end of the 2020-2021 bull run.  That makes sense now, but it could change.  Now, lets look at the longer term Bitcoin chart, going back to 2011.  Higher lows, higher highs consistently.  It was even steeper 2009 to 2011.  No asset can only go up and never pull back.  But by holding long term, known as HODLing, an investor can keep the Bitcoin stack as big as possible.  Using it as collateral to borrow against to make purchases, since it’s average return is 205% per year, since 2009.  Every bull cycle the market cap grows as Bitcoin literally eats other assets.  The next big target is Gold at $9trillion.  That will probably happen the next cycle.  Until then, strong holders with strong conviction will avoid capital gains taxes and HODL: 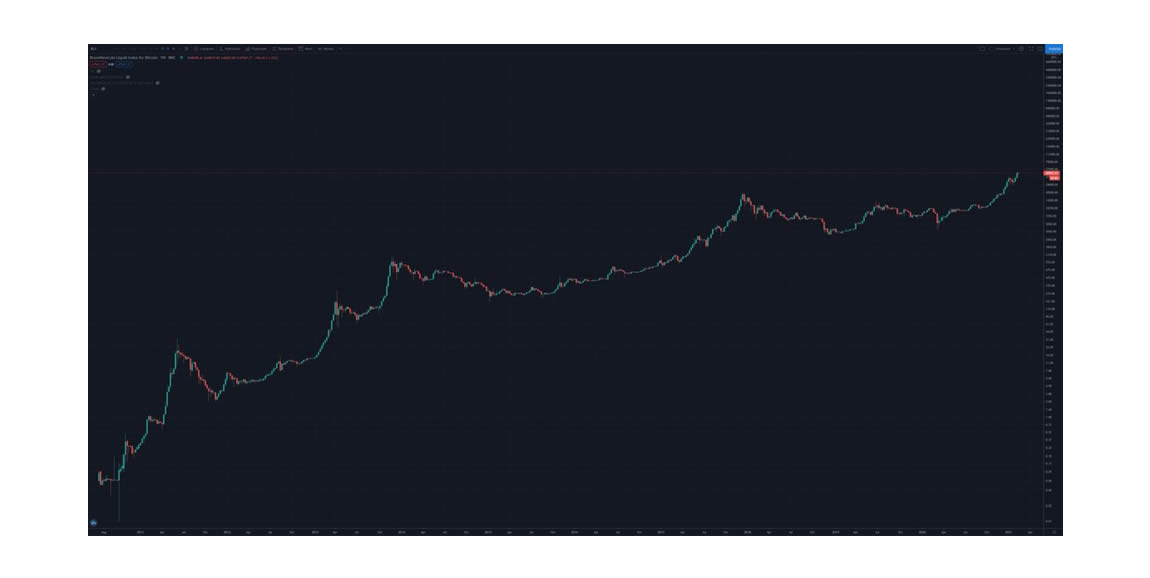 To diversify into other assets (Real Estate, Ethereum, Fine Art, Gold, Classic Cars) borrow against the Bitcoin as collateral: 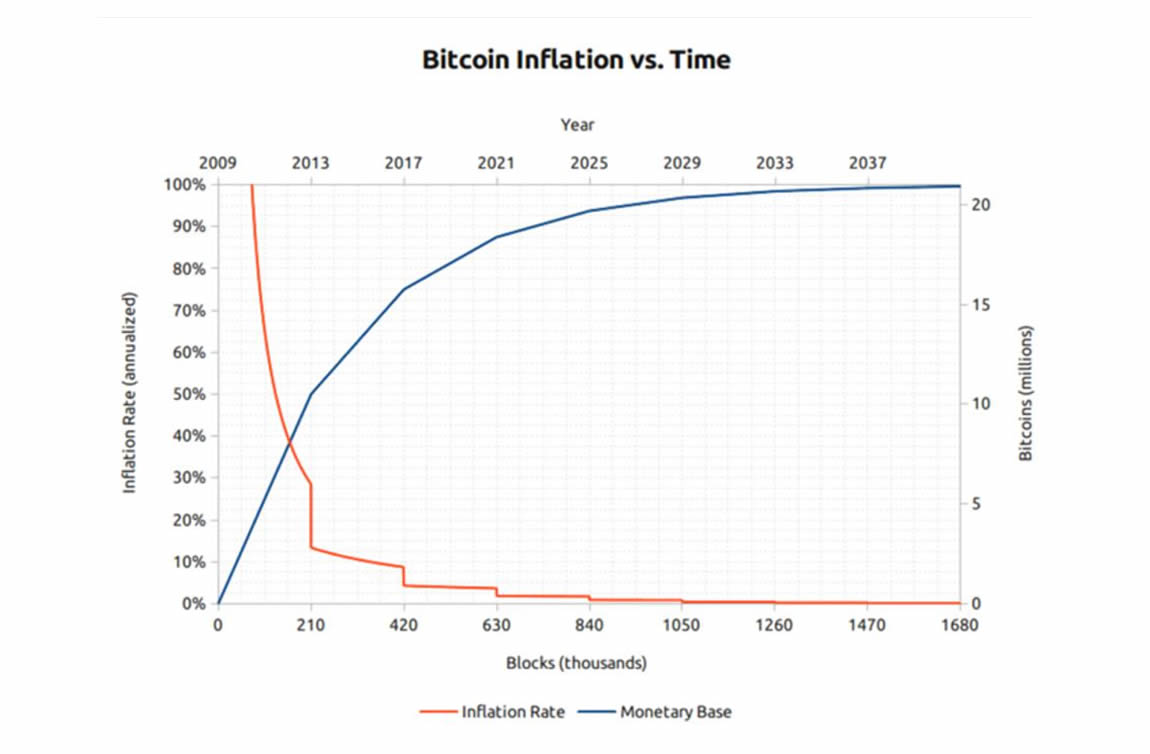 Where it shows the monetary base, that means number of Bitcoin produced.  So as USD inflates in quantity, Bitcoin deflates, which is the red line in the above chart going down.  Since Bitcoin is so deflationary while USD is inflationary, Bitcoin is the asset to store wealth in for years to come.  We already mentioned in several blogs how Bitcoin’s difficulty adjustment is one of its best features.  This ensures how the blockchain can garauntee that each block will be rewarded every 10 minutes or so.  Without a difficulty adjustment.  One quantum computer would have been able to successfully attack Bitcoin and win all block rewards forever.  Eventually leading to one miner owning over 51% of all Bitcoin.  The difficulty adjustment prevents this from happening long term.  Trust Bitcoin, governments globally are inflating their currencies.  Bitcoin is free market economics.