Why Is Bitcoin So Rhythmic?

Notice the question is rhythmic, not volatile.  By understanding why Bitcoin is rhythmic it explains the volatility as well.  Cycles are 4 years.  Why?  We have said this many times in the blogs.  The first two years of a cycle are bear market, then re-accumulation (consolidation) years.  The last two years include the halving.  They are bull market years.  Leading up to the halving Bitcoin is either a bear market or a re-accumulation market.  The halving occurs after 210,000 blocks have been mined.  Then the miner reward gets cut in half.  This reward is what miners get for successfully mining one block of Bitcoin on the blockchain.  Of course, it is paid in Bitcoin.  In 2009, it was 50 Bitcoin per block.  Today, it is 6.125 Bitcoin per block.  They use ASIC mining equipment to do this.  The proof of work that sets Bitcoin apart from other crypto currencies is the power required to fuel the ASIC miners.  Also, the time and energy required to mine a block of Bitcoin.  When the miner reward is halved (the halving).  Half the Bitcoin from that day forward is released into the marketplace.  The supply shock has started.  First, miners mine slower.  The hashrate (terrahashes/second) drops off some.  Then, some miners capitulate.  It takes close to a year for the supply shock to set in, after the halving.  In the last bull run of 2017 it took 1,477 days from peak to peak.  The 2013 bull run to the 2017 bull run.  See the chart below. 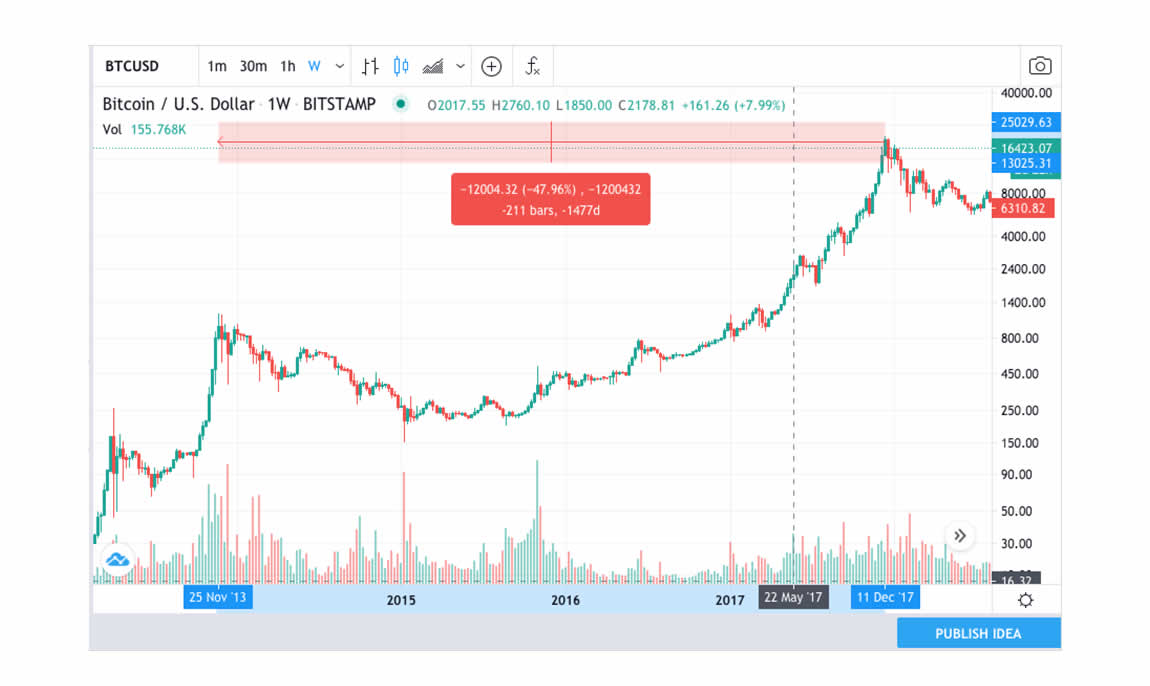 We think that is institutional manipulation, for market depression, to buy in lower.  The train is leaving the station and Goldman Sachs will not be left behind.  Others got involved too no doubt.  These dumps have been timed dumps allowing institutional investors time to buy cheap.  The next wave of supply shock is incoming.  Are you ready for it?  Future derivative contracts buying up futures on Bitcoin at increasing prices will be the next wave to drive up the price.

Now lets look at the 2017 bull run compared to now.  See this chart: 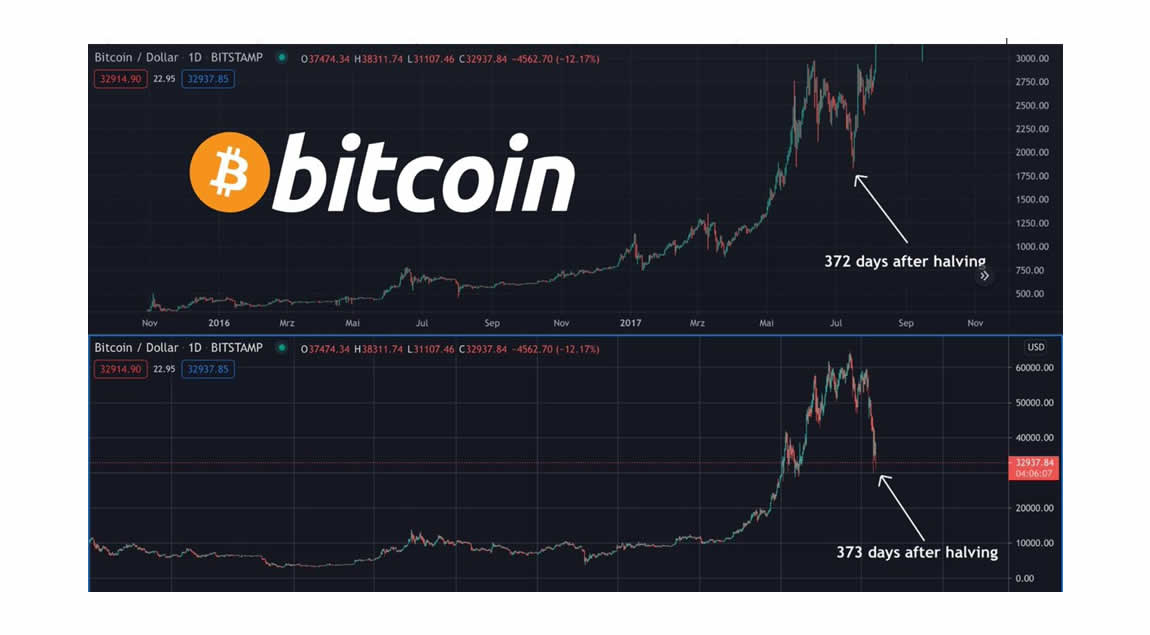 The same time in terms of days after the halving, what happens?  A dump to shake out weak, new investors of Bitcoin.  Typically they sell to the more seasoned investors who have been in it a while.  Never sell into a dump!  Remember that!  In 2017, Bitcoin climbed 11X from the bottom of the 372 day post halving dump, to the top of the bull market.  Today, that would mean $330,000 Bitcoin at the top of THIS cycle! 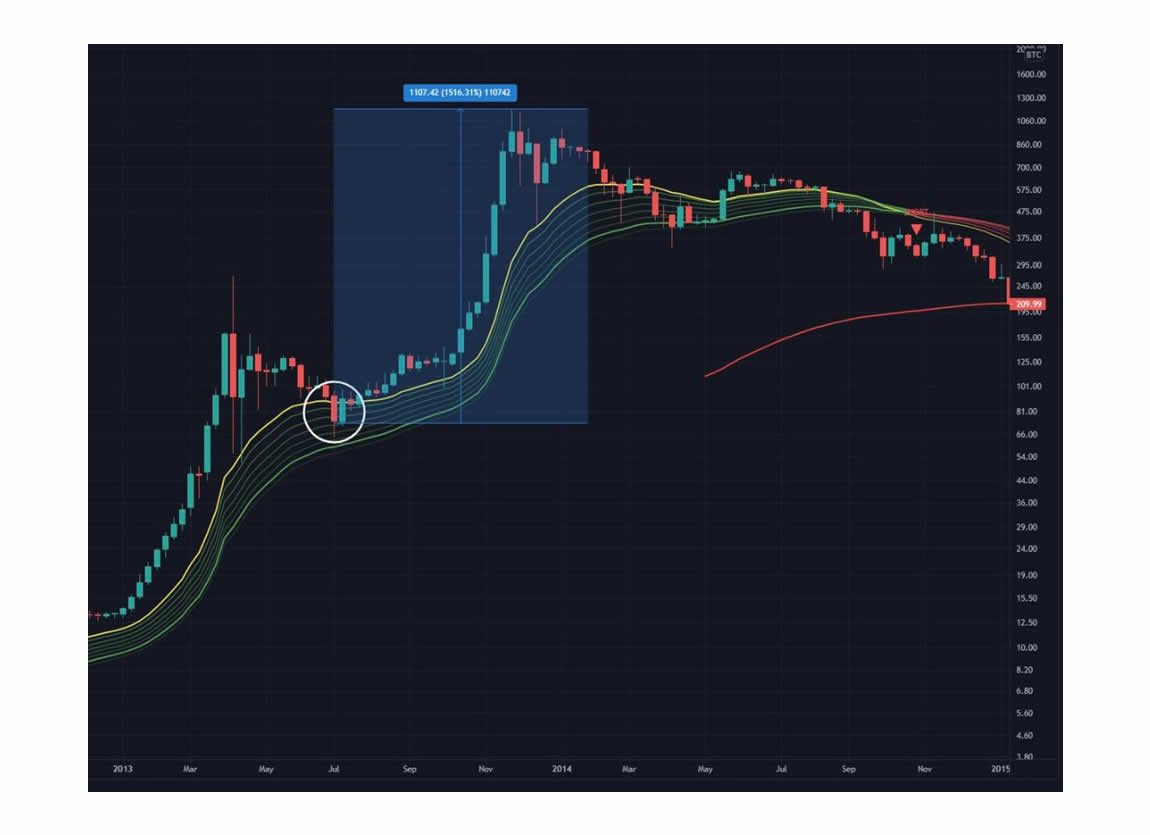 Will Bitcoin follow the rhythm of the 2013 bull run this year?  In that 2013 bull run, Bitcoin peaked, re-accumulated for 5 months, and pulled a 15X parabola.  If $64,829 was the first peak, then if this bull run is rhyming with 2013, it may re-accumulate until August/September, then hit $471,000!  Of course, these are speculations, and no two bull markets are identical.  They simply rhyme.  Obviously, Bitcoin is volatile.  One must ride it out to be successful.  Panic selling NEVER works!  Again, we remain at a predicted cycle top price of $160K to $220K and we believe that is conservative.

In the next chart, it shows the number of addresses accumulating Bitcoin is rising even as Bitcoin is dropping in price.  Due, in our opinion, to institutional manipulation (wash trading).  Here is that chart: 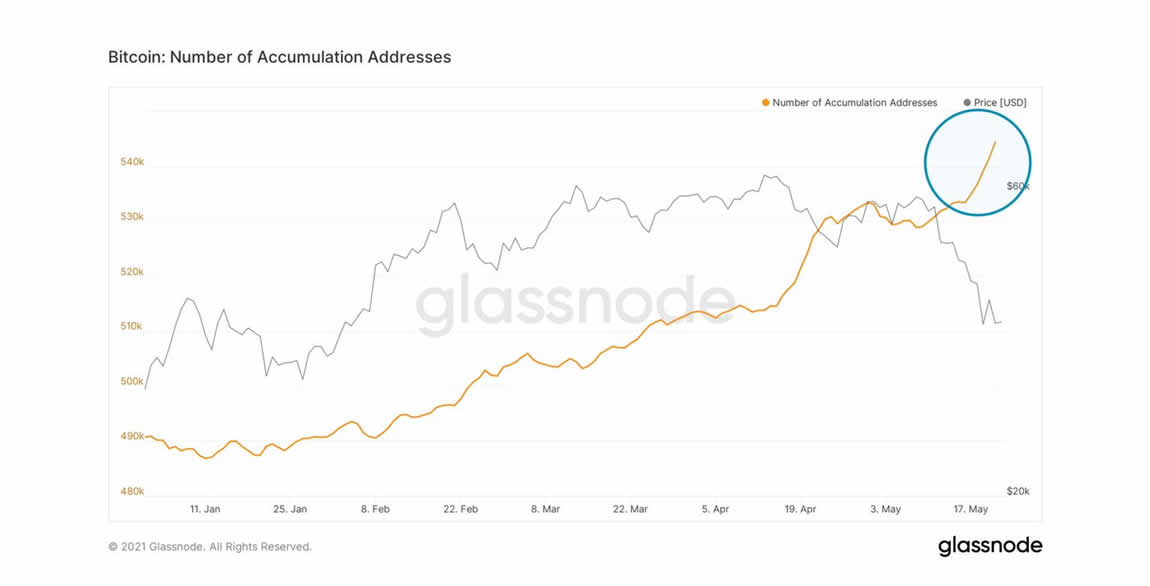 Consolidation of the price action often motivates smart money to re-accumulate.  Neutral ATM has been re-accumulating, although we have never sold a satoshi up to this point.  In this chart below, re-accumulation has begun and is picking up momentum: 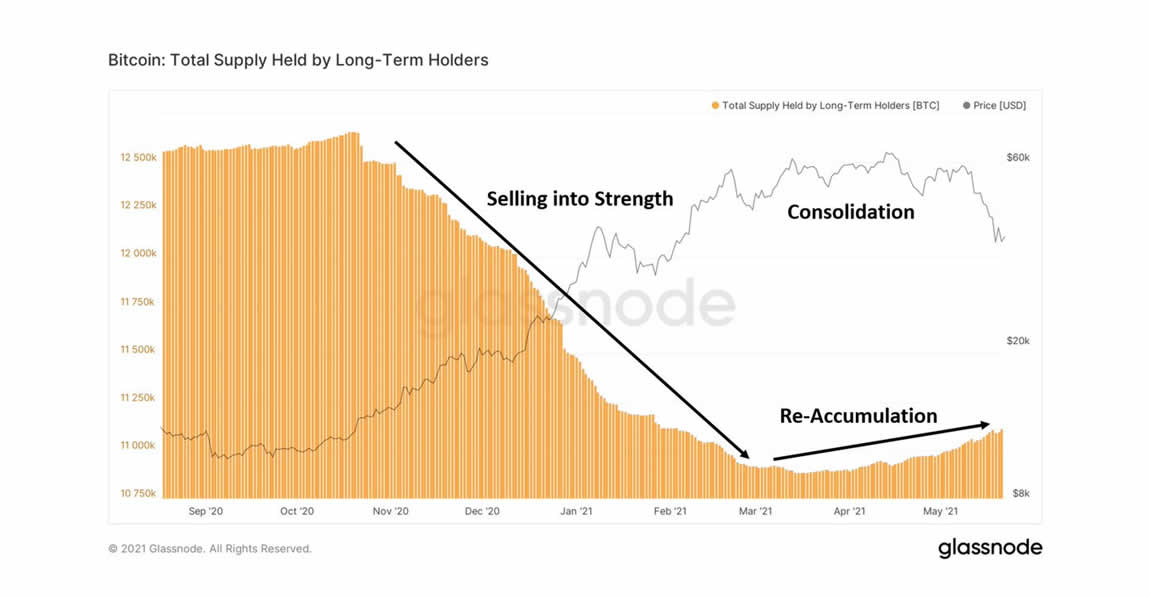 Do not allow yourself to be lulled into intellectually dishonest arguments that Bitcoin is going to zero or is in any kind of trouble right now.  China FUD (fear, disbelief, doubt) goes viral on the internet and TV, every year or two, when Bitcoin goes on a nice run.  It happened in early 2019, and back in 2018, and 2017.  It happened last week and it will do nothing to Bitcoin’s price, or adoption, long term.  Many parts of China mine with coal based power.  Other parts of the world use renewable power to mine Bitcoin.  Less Chinese mining is good for Bitcoin from an adoption standpoint and an environmental standpoint.  Bitcoin has oscillated down, in it’s rhythm, but it is not out!  It is a shake out.  Don’t sell your Bitcoin to Institutions only to buy it back much higher later on.  You’ve only lost if you sell out.  Remember, Bitcoin will likely break $1 million per coin in the 2025 bull run.  Hold until then, or the 2029, or better yet, the 2033 bull run if you can.  You will be very glad you did!