Why Bitcoin Mining Hashrate Will Lead The Ascent

There are many reasons to be short term bearish and mid term bullish, regarding the future of Bitcoin in 2021.  Liquid supply ratio, in the below chart, proves that the supply shock is happening, and long term accumulation of coins vs demand will turn the price action positive: 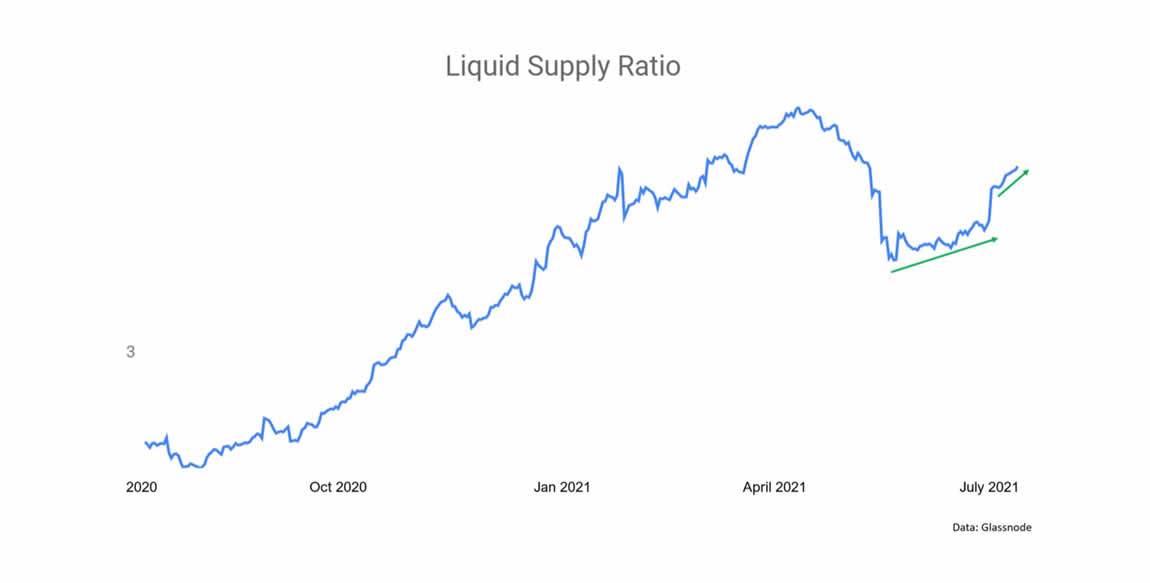 Long term accumulation has turned up, that is evident on the next chart comparing accumulation and distribution: 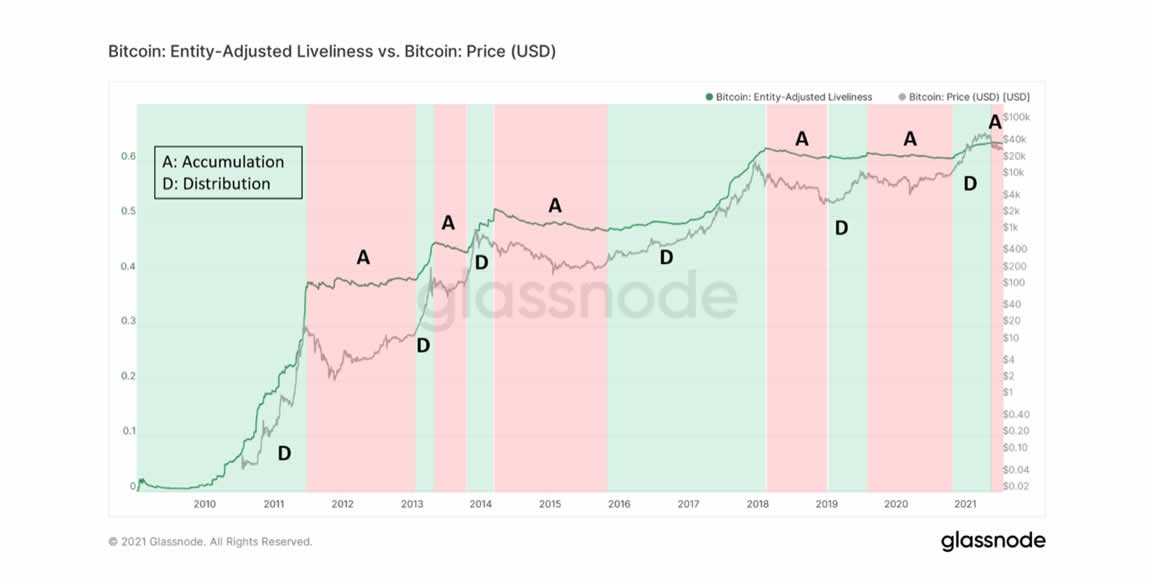 This chart leads to a major question.  What caused Bitcoin to go from distribution (November 2020 to May 2021), to accumulation presently?  The miner capitulation mandated by China (mining ban) is our answer, combined with a lot of media FUD since April. The Bitcoin hash rate (Terra Hashes/second) droped by 66% when the mining ban went live.  Apparently, the government even cut power to mining data centers.  It will take months for the new mining data centers to come online.  This all started by early June and it took a few weeks to complete.  Neutral ATM opined back in early June that August may be when the price would start responding.  Now we have even said August possibly September.  Another thing to look at on this chart, is the double top bull run price action in 2013.  See the peach colored accumulation time period in the middle of the bull run?  It last around 5 months.  We are 93 days out from the ATH on April 15th.   Therefore, September could be a worse case scenario for when the price action could start to improve dramatically to the supply shock.  We still think August is more likely when the break out will occur.  We have mentioned the importance of patience over and over in our blogs.  This is why. 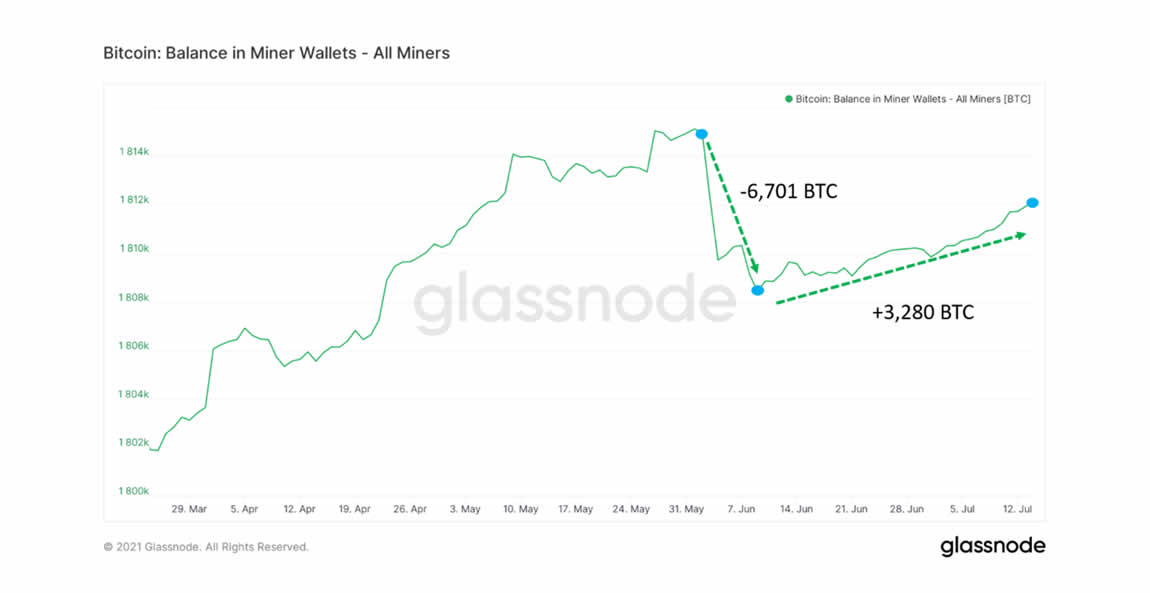 Once that Bitcoin is recovered back in miner wallets, price action should start to recover.  Hash rate is the TH/S (Terra Hashes/second) measurement for miner activity.  Notice how price has followed hash rate in a general since.  The 100% hash rate recovery is what it will take, we presume, for Bitcoin price action to recover as well: 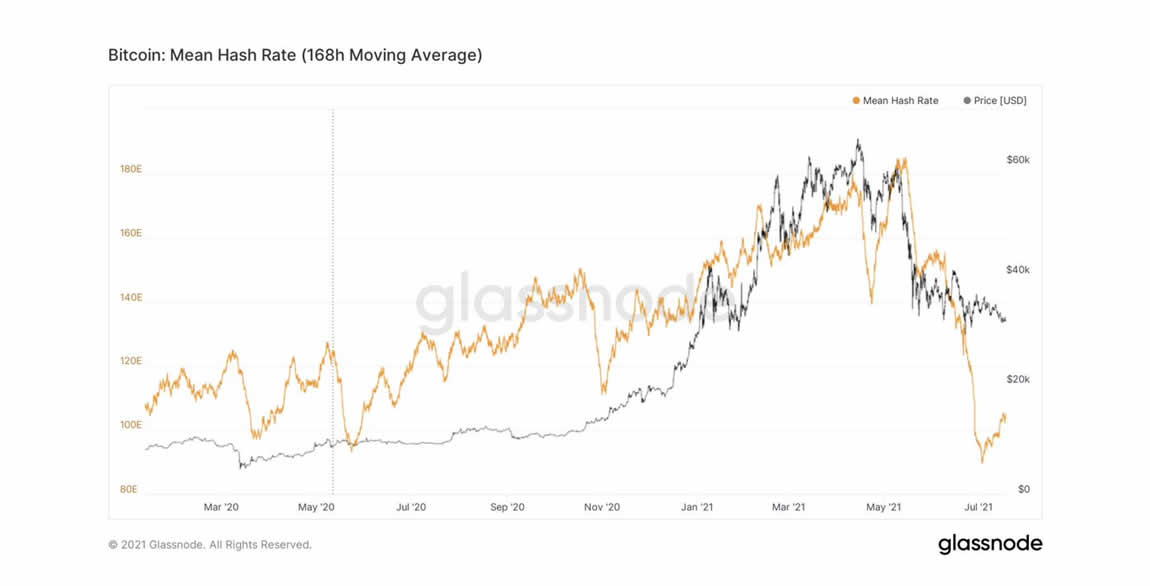 There is a long way to go for that hash rate to recover, which is why we see August or even September for the price breakout.  When it happens.  Look out!

This next chart is interesting because, in yearly candles, one can really see how well Bitcoin has done in three year time frames, then Crypto winter for a year.  As of July 16th Bitcoin had a paltry 8% annual return.  It was 108% back in April.  Will Bitcon end the final year of the 4 year cycle with a red candle?  It never has before!  The worst yearly candle is always the first year of each 4 year cycle.  2009 and 2010 are not on this chart as the tracking was not as prevelant on Bitcoin back then.  There were no red yearly candles until 2014.  Neutral ATM does not see 2021 breaking the cycle Bitcoin has been in.  This bull run is likely to be a double top, like 2013 was: 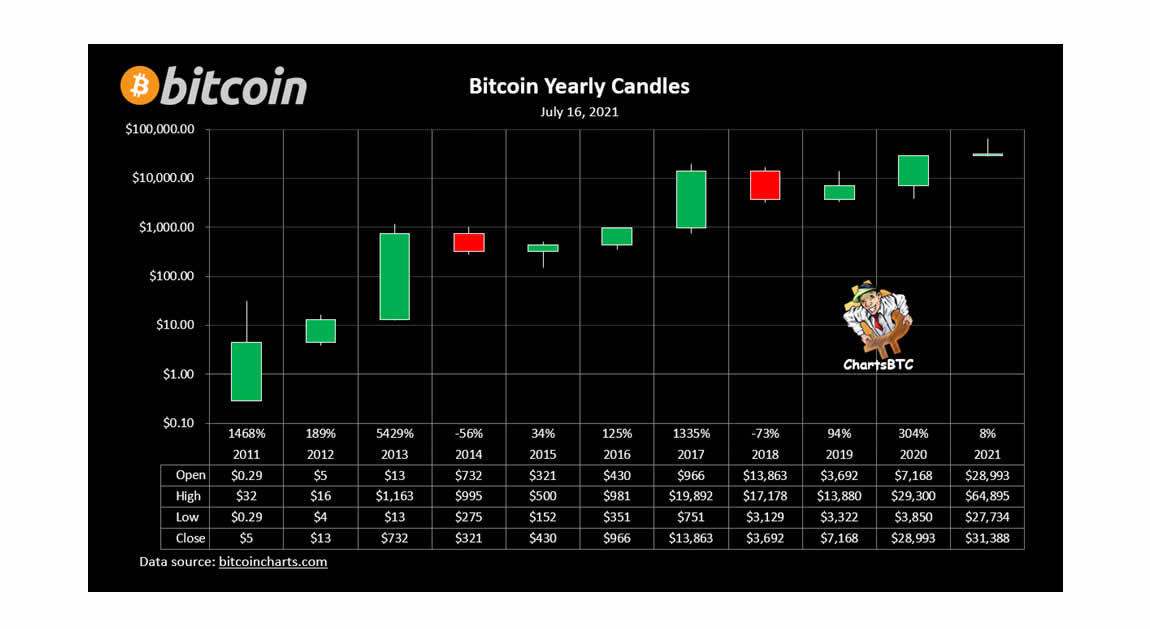 Bitcoin mining in the oilfields and even among power plants, is causing demand for mining in the US and Central and South America to explode.  Many of the Bitminers from China will end up in the US and Central/South America.  We believe, that once the hash rate recovers in August or September, Bitcoin will have the oppurtinity to pick up where it left off in April.  Bitcoin mining the shut in gas, stranded gas in oilfields, whereby gas cannot get to the processing facility, improves demand for mining.  Oil and Gas operators have to do something with this gas.  Flare gas as well, gas being flared is an obvious environmental liability.  Since  a Bitcoin mining package can use up the gas, turn it into power, and mine Bitcoin for exponentially more return than the pipeline will pay, this demand for mining will keep increasing.  As that increase happens, more mining will happen in the US, Central America, and South America.  The hash rate only increases as new Bitcoin mines come back online.  We know this takes time.  However, as more and more companies become aware of how Bitcoin mining can improve their economics and there environmental liability.  They will begin to realize, Bitcoin turns gas, and in some cases steam, in to hard money.  This hard money is worth more than the gas being sold on the pipeline or power being sold from the power plant.  These businesses get to improve their bottom line, and their ESG status.  In the end, the US will be a major part of the Bitcoin hash rate recovery and it’s subsequent price action recovery once these mines are all back online.  We hope this blog helps bring understanding to what’s behind some of the volatility and how that can work in the investors favor.  Embrace the volatility, understand the why, then use it in your favor.