What is Wrong with The Economy & What Can I Do About It? Part 2

Today we should begin with more explanation about inflation.  The CPI index tracks USD compared to a basket of goods and services.  50 Million Americans are given cost of living raises based on CPI.  Here is the formula:

Since 1983, when interest rates were very high the government started changing this index to make inflation look lower.  They used this time period as “the stake in the ground” with which to compare all future years to this time period when inflation was very high.  In the above formula, the 100 multiplier is from the following years:

Most CPI index series use 1982-84 as the basis for comparison.
Source: Corporate Finance Institute

Purchasing power is the power to buy things required to live.  If there is extra money, then a person can buy the extras to live even better.  Hence, quality of life.  If the purchasing power of your currency is equal to the other currencies in the world.  Does that tell you that your quality of life is better than other countries or not?  No, it fails to answer the question.  If the basis used to measure inflation is 1982 – 1984, when inflation was at all time highs.  Does that answer the question?  No, it does’nt! The only way to know if your purchasing power in your currency is going up or going down, is to compare its purchasing power to the cost of goods and services required to live in the given calander year.  Therefore, Neutral ATM would like to re-introduce everyone to the chapwood index, www.chapwoodindex.com.

Please read this index in the link above.  Understand it.  If food, travel expenses (Gas, hotels), education, and utilities were 60% of your budget last year, and 72% of your budget this year.  The difference is inflation.  CPI is used by the government to ascertain government employee pay raises, pension increases, insurance payouts and many other expenses.  Naturally, the government is incentivized to keep CPI low.  The index is the issue here.  Please understand, The CPI is indexed to 1982 – 1984!

Paul Volker was the Fed Chairman in those years.  He was an Austrian Economist not a Keynsian Economist as we see in the US today. He raised interest rates to slow down out of control inflation like what was seen in the 70’s.  That is the basis for the CPI.

These numbers appear to explain the difference between the Chapwood Index and the CPI. In the CPI there is a built in buffer of about 4.56%.  So every year inflation is kept under control compared to 1982-1984, the CPI looks better by 4% to 5%.  There may be other factors in play that we have not been able to discover.  For example the 20% top and bottom inflation rates are shaved off.  This could also skew the number a little.  The Fed announcing a goal of 2% inflation could actually mean closer to 10% or higher if you are using the index from www.chapwoodindex.com!  Remember, Jerome Powell announced a couple of months ago the Fed will run inflation hot for the foreseeable future.  Even this week Biden stated the $900 billion stimulus was only a “down payment”.

Now we will attempt to tie this misleading CPI number back to present day and Bitcoin.  Bitcoin is scarce, we have shown everyone the stock to flow model numerous times.  It measures Bitcoin production which can be counted daily against the price action of Bitcoin.  The production of Bitcoin is reduced by 50% every 210,000 blocks, which is about every 4 years.  A block is added to the blockchain every 10 minutes.  210,000 blocks produced every 10 minutes is 3.995 years.  So in 2009, Bitcoin was producing 7,200 Bitcoin per day.  On May 11, 2020 we had the 3rd halving of Bitcoin, which dropped production to just 900 Bitcoin per day.  By comparison, USD has seen 22% of all USD in circulation today, were printed in 2020.  Federal debt is now $27.5 trillion.  A few years ago it was in the $billions not $trillions.  Money supply has seen an exponential increase in 2020.  Here is an adoption curve chart of Bitcoin, below.  It shows institutional adoption has just started this year.  As adoption goes out the curve, volatility is drastically reduced.  Tech stocks proved this in the 90’s as they reached the apex of their adoption curves.  Here is the chart: 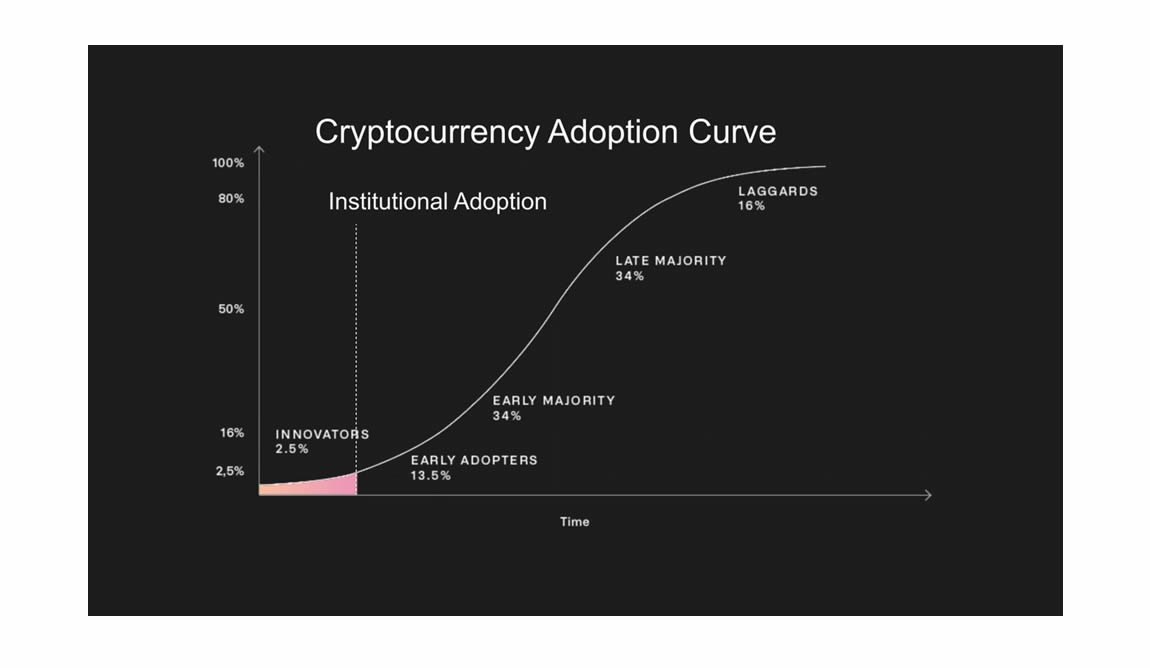 Listen to Michael Saylor discussing Bitcoin in an interview yesterday, regarding Bitcoin adoption.  His company Micro Strategy invested $500 Million into Bitcoin this summer.  It doubled in Months.  Now they raised money to borrow fiat currency at incredibly low rates, to then buy another $60 million in Bitcoin.  Almost 79 days of 2020 Bitcoin production is owned by Micro Strategy.  Here is the video of Michael Saylor, 7:27 minutes:

Michael Saylor even tweeted with Elon Musk about how to move large sums of USD into Bitcoin.  We’ll see what Elon Musk does.  He is very private, it will come out eventually.  Bitcoin now has over $432 billion in market cap.  There are $350 trillion tied up in bonds.  If you take the inflation discount on bonds of 10%, which is real inflation.  Bonds are negative.  That means 40% of every 60/40 ETF portfolio is negative.  It is drastically hurting pensions and endowments.  When not if, a significant % of that $350 trillion moves in to Bitcoin as a safe haven store of value.  What will that do to the price of a Bitcoin?  Are you willing to wait? Here’s Michael Saylor again, 1:10 minutes: