Bonds are crashing now, which means their rates are going up faster than FFR (Fed Funds Rate) is.  This chart below details how each US Treasury bond rate is rising: 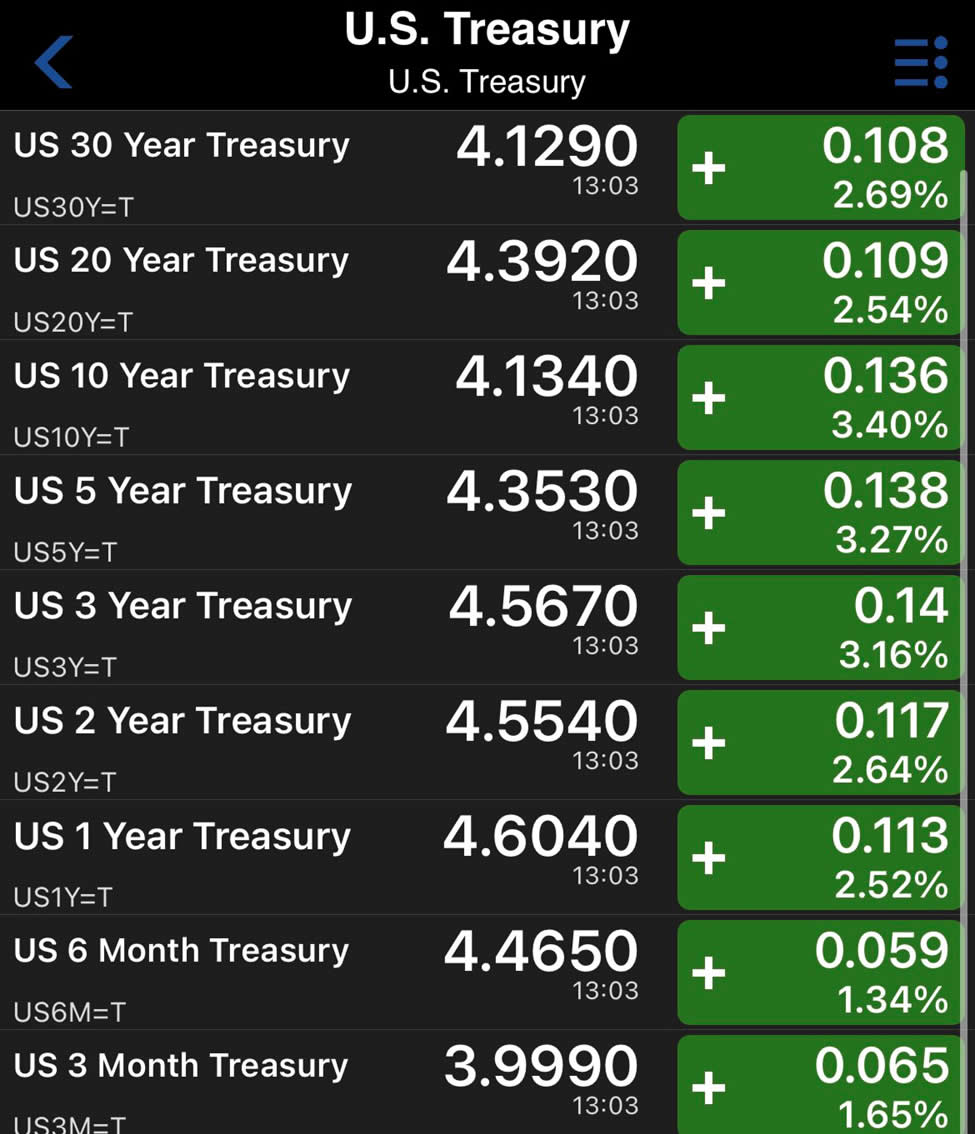 These higher borrowing rates are slowing down home purchases and all other retail sales.  Especially the more expensive purchases.  Now, it appears swap line auctions at the Swiss National Bank are EXPLODING!  Swap line auctions are held at the Swiss National Bank.  If there are no bidders at the auction, that means the monetary system is organically producing enough liquidity for commercial banks.  However, swap lines with SNB have gone from $0, to $3 Billion, to now $6 Billion (Last week) in international swap lines, with up to 15 counterparties on each swap line.  Thus, counterparty risk among commercial banks is going parabolic.  This is the problem.  See this chart below from George Gammon:

Each bank needing liquidity at the swap line auction is a counterparty.  So yesterday’s update, is that there are now 17 counterparties, and $11 Billion in Swiss National Bank swap lines.  Swap lines are a proxy for the health of the Global Monetary System!  If you want a comparison, in 2008 when the great financial crisis kicked off, swap lines at the SNB hit $23 Billion!  Today, we are up to $11 Billion in a matter of a few weeks.  We will keep watching this.  Here is another chart from George Gammon.  This shows how as the weekly auctions require more USD to be swapped for other currencies at the SNB, then that tells us that banks are having liquidity issues.  As these swap line dollar amounts grow, the risk to the Global Monetary System grows:

If this risk does continue to grow into November, it puts a deflationary crash in focus, as a very higher % chance of happening!  This could be weeks away!

Remember how George Gammon updated us more recently then this chart, that Fed swaps at the SNB are up to $11 Billion.  The day before it was $9 Billion, per Mark Moss:

So we can truly see this great financial crisis 2.0 unfolding in front of us!  We don’t want it, but it is coming regardless.  This next chart below shows how we got here by detailing CPI inflation (red line), and comparing that to the SPX (grey line).  Notice how everytime the SPX is dropping fast, so is inflation or the CPI line on this chart.  Raising rates kills demand and equity prices like stocks, and real estate.  Historically, there is always a time period of tightening whereby CPI is reduced along with equities.  Yet, it always pivots and goes the other way.  Governments cannot afford to destroy asset prices perpetually.  They have to stop and loosen monetary and fiscal policy to allow for asset price inflation.  Doing this debases currency, and causes over all inflation.  It is the rule of unintended consequences! 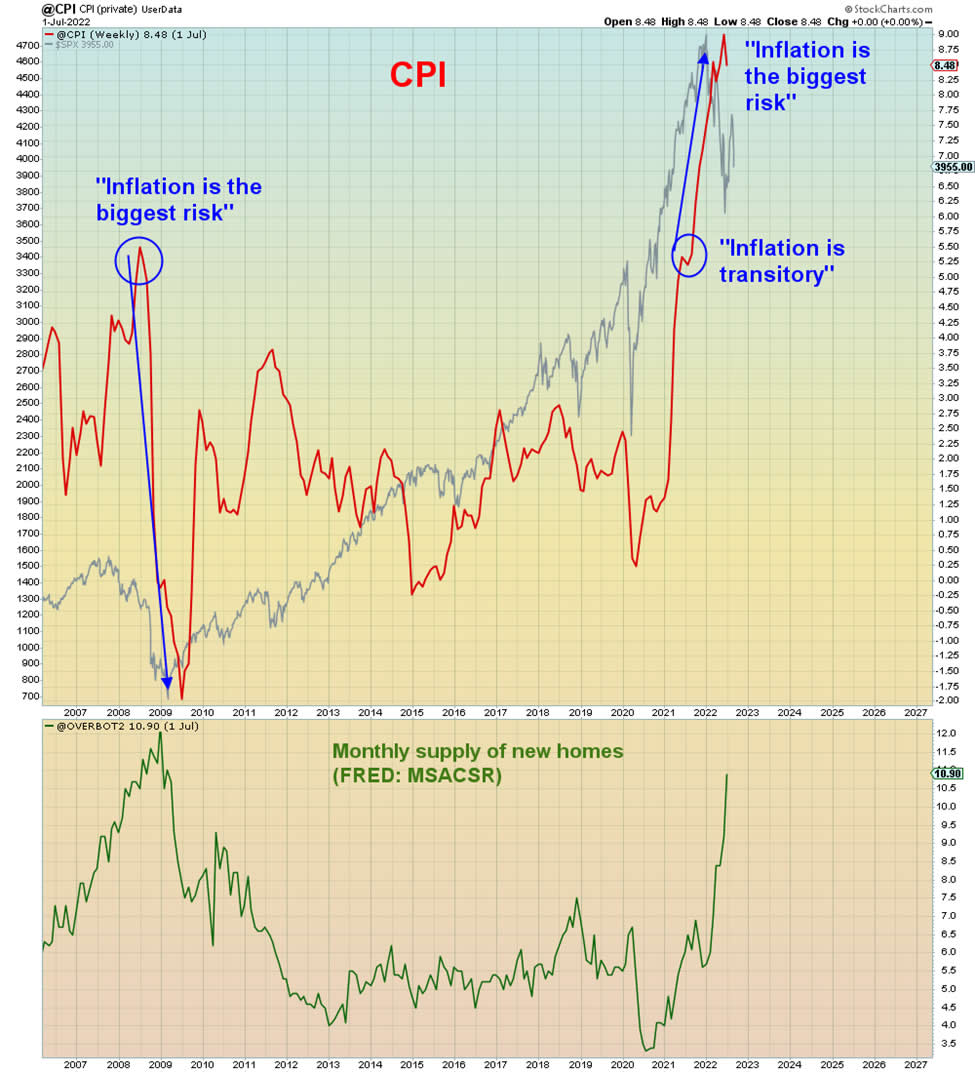 Pay attention to the monthly supply of new homes as well.  That is the green line in the lower chart above.  New home sales are down -28% this year.  Home values are beginning to start crashing.  We believe there is much more to go until this reverses course.  Supply of new homes in the above chart aobut to hit the 2009 all time high.  The main difference between 2009 and now, is that 2009 was a US financial crisis.  2022 is a Global financial crisis.  The amount of debt that must be unwound is exponentially higher!

Will a new global reserve currency (BRICS proposal) come out of this next year and into 2024?  We think so and we hope so.  That would be positive.  Kicking the can down the road is not working.  In the meantime, expect worsening inflation.  Eventually, this will get to Bitcoin as the greatest inflation hedge in the world.  Right now, however, we see Bitcoin suffering from this monetary tightening and higher rates, along with the fact there is a futures ETF and no spot ETF yet for Bitcoin.  As the new product from Fidelity Digital Investments attempts to provide spot Bitcoin for it’s clients.  Coming out on October 28th.  Fidelity states “Bitcoin has no counterparty risk and has a supply schedule that cannot be changed”.  Scarcity, decentralization (which means there is no central bank counterparty) are keeping Bitcoin held up. We must now wait for this spot Bitcoin product from Fidelity, and eventually an SEC approved spot Bitcoin ETF.  Watch for how the SEC reacts when inflation starts picking up again next year!  We shall see.  Perhaps when left with no other options, the SEC will approve the spot Bitcoin ETF!  We are not financial advisors, and this is not financial advise.  The monetary system is in serious peril, and risks are worsening by the day, that it will implode on itself, due to debt and lack of liquidity.  There will be a clarity that comes, AFTER this is all over.  Until then, trust the scarcity and decentralization of Bitcoin.  The monetary system is coming down, don’t stay attached to it with more than you can afford to lose.