Bitcion has evolved over the years.  So has inflation, so has the Cantillon effect.  As more people become aware of the Cantillon effect, whereby only those closest to the money printer build wealth.  Meanwhile, the value of the currency, in a country where money is printed freely and monetary policy is loose, becomes devalued.  In essence, government officials and bankers with access to capital, big money donors to government officials.  Those are the ones benefiting from the Cantillon effect.  Everyone else sees their buying power, in terms of the currency, being devalued every day that goes by!  This creates wealth inequality, and a lot of anger, and resentment.  Many G-20 countries have this problem.  Inflation comes with the territory.  Now that Bitcoin has been invented in 2008/2009.  It started as a whisper and is turning into a scream.  Many people are fed up with this systemic theft.  Government and their elite donor class enrich each other and devalue the currency, simultaneously.  As Bitcoin evolves it creates fissures in this Cantillon effect.  It gains popularity and network effect, because of the number go up (NGU) technology, we discussed in the last two blogs.  This chart shows Bitcoin’s progress of evolution: 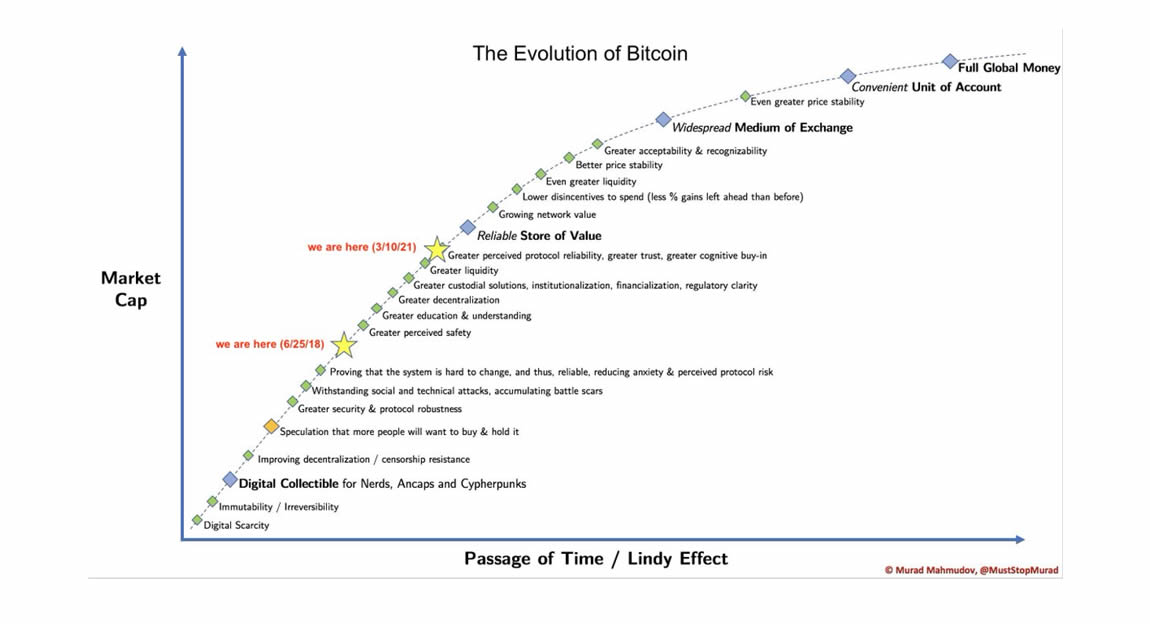 At Neutral ATM, we think it is ironic that M2 money supply was recently discontinued.  Also, the chapwood index was shut down a few weeks ago.  That showed us real inflation in each geographic region and city.  9% to 14% was real inflation in 2020, depending on geography.  Hopefully, another website will begin tracking real inflation soon.  We will be searching for that replacement.  Below is the M2 Money Supply or Stock chart, as new as we can find: 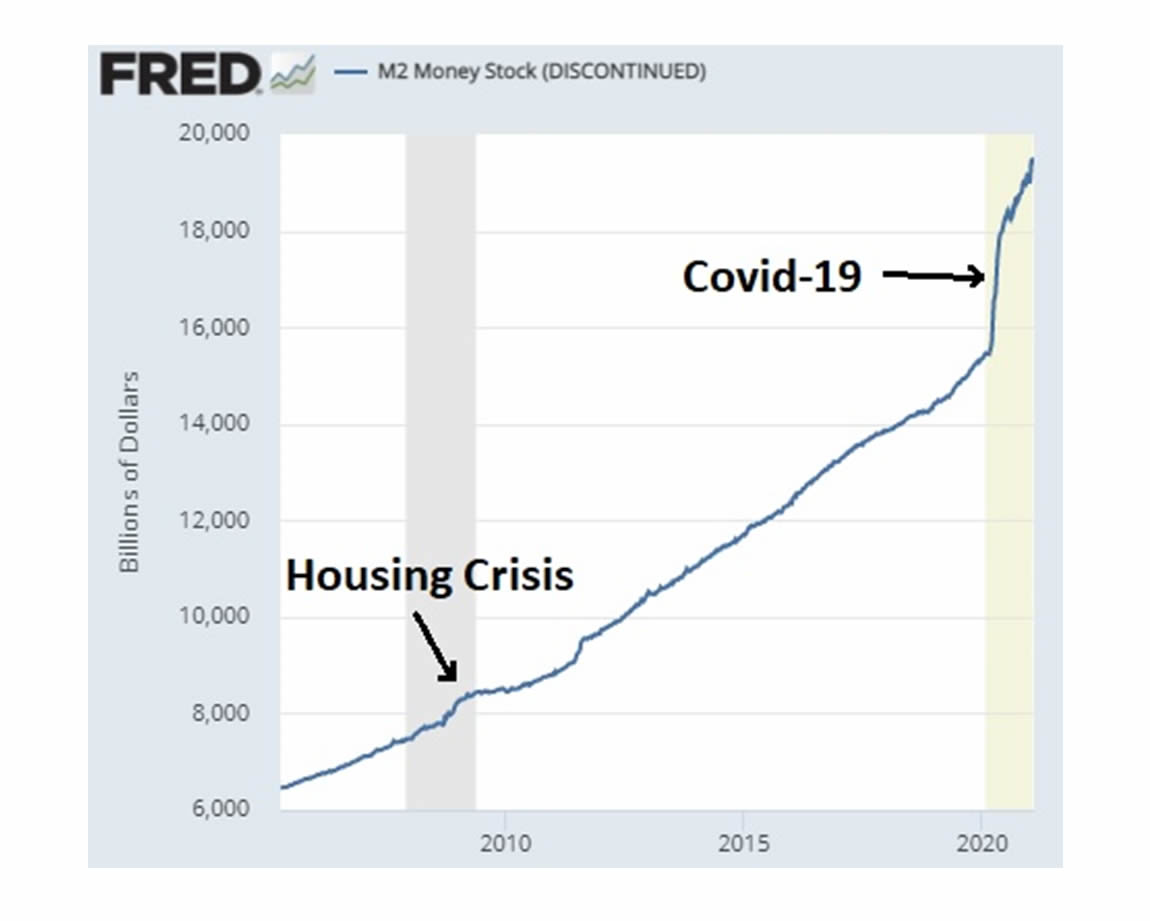 None of this information includes 2021.  Which is ironic, because money supply just exploded with the $1.9 trillion stimulus bill.  No doubt money supply is over $20trillion right now.

So, the more inflation and the Cantillon effect hit the global economy, the more the network effect will be positive for Bitcoin.  Inflation and Cantillon effect feed the network effect for Bitcoin.  Unintended consequences!  Bitcoin was born out of this crisis.  Bitcoin is fed from this crisis.  Even if the US went back to the Gold standard.  The amount of Gold required to make that a reality would be so high, it would crash the value of Gold.  There is simply not enough supply of Gold, that we know about.   Therefore, the real solution for backing a money supply has to be digital.  There is no other type of money that could remain financially stable backing all of the world’s money, other than a digital currency.  We hope we live to see that day become reality.  But in the meantime, watch what Bitcoin does between each halving when the miner reward is cut in half, every 210,000 blocks.  Remember the last two blogs from Wednesday and Thursday.  Each halving is a supply shock.  The price reflects the fact that Bitcoin miners get half the Bitcoin as a reward from solving a block on the blockchain.  Therefore, when the miner reward is halved, the price of each coin has to go up to make up the difference.  Miners therefore hold their Bitcoin as long as they can.  Some miners do not survive the halving.  Those who do not capitulate and survive, reap the rewards of a more valuable Bitcoin, albeit half the number of Bitcoins as before.  Before May 11, 2020 the reward of 12.5 Bitcoin and after May 11, 2020 it became 6.25 Bitcoin.  As more and more blocks are produced the requirement for the Bitcoin to be held and not sold goes up.  This perpetuates the price climbing more and more rapidly.  See the chart below: 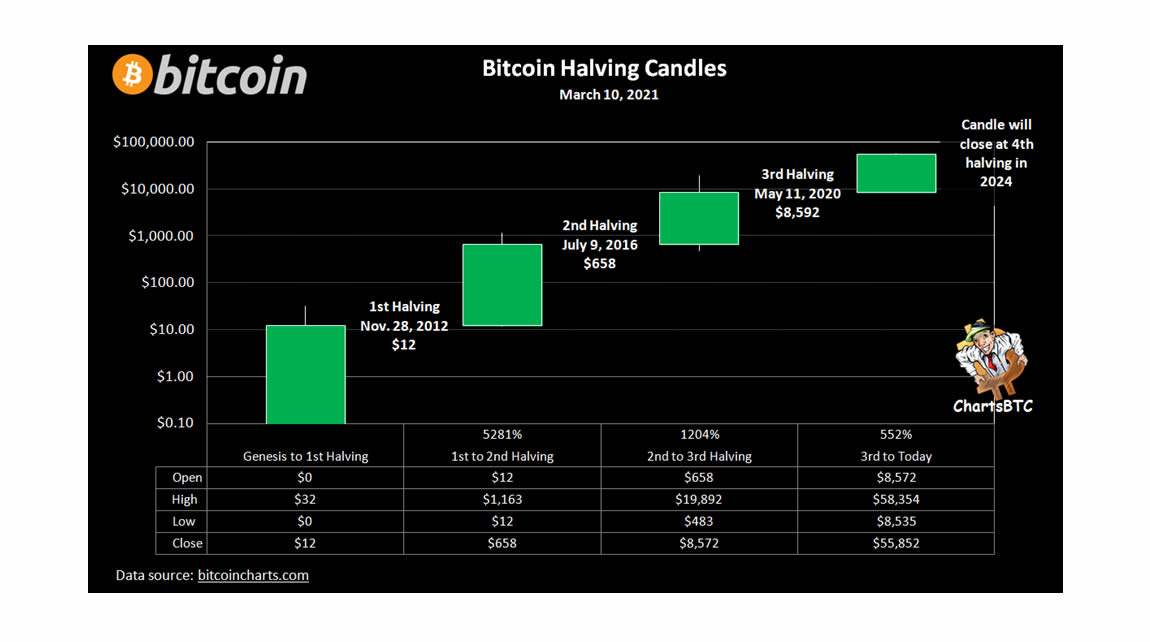 The halving in 2024 will likely see Bitcoin in the $80K to $100K range.  Neutral ATM believes the high of this cycle will occur in the 3rd or 4th qtr 2021.  That range should be between $160K and $220K.  Subsequently, if you hold Bitcoin long enough and buy the dips, price per Bitcoin does’nt matter.  Only how much Bitcoin you own matters.  The inner strength to resist selling your Bitcoin is important.  That is a muscle that must be excersized, for it to be useful.  Stay strong, don’t sell.  Buy scarce assets at market tops.  Then hold on until the next market top in 210,000 blocks!  Which is 4 years.