This is Getting Frightening!

Today, we will start with the bad news and end with the good news.  The $1.9trillion stimulus was finally approved and signed.  What disgusts us is that the amount for individual families was reduced while the amount for big business and big government agencies was drastically increased.  The minimum gross annual income droped below $80K per year.  This drastically reduced the number of families impacted.  Then the pork was heaped on to the stimulus package, in the form of uncountable numbers of government agencies, getting benefits from the stimulus package.  In addition, the M2 money supply charts, and publicly available information, counting total (USD) money supply in circulation.  Will no longer be made public on the FRED.com website.  Subsequently, the www.chapwoodindex.com website was recently shutdown. Chapwood would always give us accurate inflation data nationwide.  For example, the CPI now claims inflation is 1.4%.  Yet chapwood index was showing 9% to 14% depending on where your area is.  New York and California had the highest inflation rates in the US. Hawaii was not far behind either.  Now, all of this valuable information tracking accurate, real inflation is gone.  All of this valuable information tracking total money supply (M2) is also gone.  Why? The public is no longer being given access to tracking real inflation.  The World Economic Forum was established in 1971, the year President Nixon took the US off of the Gold standard:

However, since the Gold standard ended, money supply grew dramatically, especially since 2008.  Real inflation has grown as well.  Yet the CPI is standardized to a 1982, 1983, 1984 inflation ratio, back when it was truly double digits.  So if the CPI shows 1.4% and it is ratiod back to a time when the US had double digit inflation, we have that same inflation rate now and then some.  Yet the stimulus package has pork in it for government agencies, which ends up in the pockets of politicians and their top donors.  How else do politicians build a networth of $100-$250 Million on a salary of $150K to $200K per year?  Bank reserves are used to loan money to major companies for stock buybacks, which raise stock prices for the board members and executive team of that corporation.  In effect, creating a zombie company.  Incidently, bank reserves are created in the treasury general account when the Fed buys treasuries.  They turn these treasuries into bank reserves, allowing banks to loan.  To big corporations, not small businesses.  Since the US went off the Gold standard Gold has lost ground to Bitcoin in the 12 years that Bitcoin has been around.  The chart below compares Bitcoin priced in Gold per oz with ETF holdings of Gold.   Gold is losing ground to Bitcoin quickly, because Bitcoin is fungible, fast to transact, and provably scarce.  Gold is not fungible or portable, slow to transact, and not provably scarce.  Keep in mind, with the lightening node, Bitcoin can be the underlying layer for online transactions which are instantaneous.

Here is the chart below: 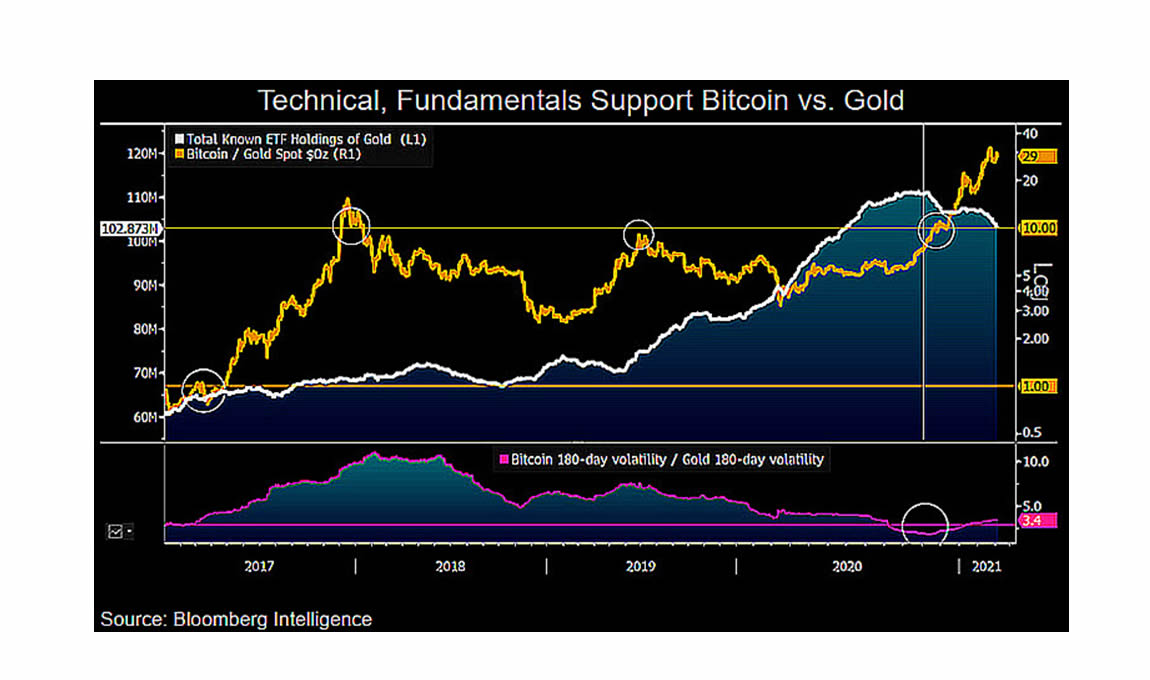 Neutral ATM is adding new ATM machines and now we have an OTC exchange coming out for larger transaction volumes.  Strike is a fantastic way to transact instantly on the internet using Bitcoin as the foundation layer, through the lightening network.  Neutral ATM is giving people ways to get off zero Bitcoin at $20 increments. Now, if they want to invest in large quantities, we have an OTC Exchange coming online with much smaller fees!  Many customers of ours send Bitcoin overseas or to Latin America instantly.  Ironically, a person in San Salvador, or Venezuela where the local currency is nearly worthless, can build real wealth by saving money in Bitcoin instantly.

Speaking of Bitcoin.  It has printed an inverted head and shoulders pattern and since this chart came out, it printed a W pattern afterwards: 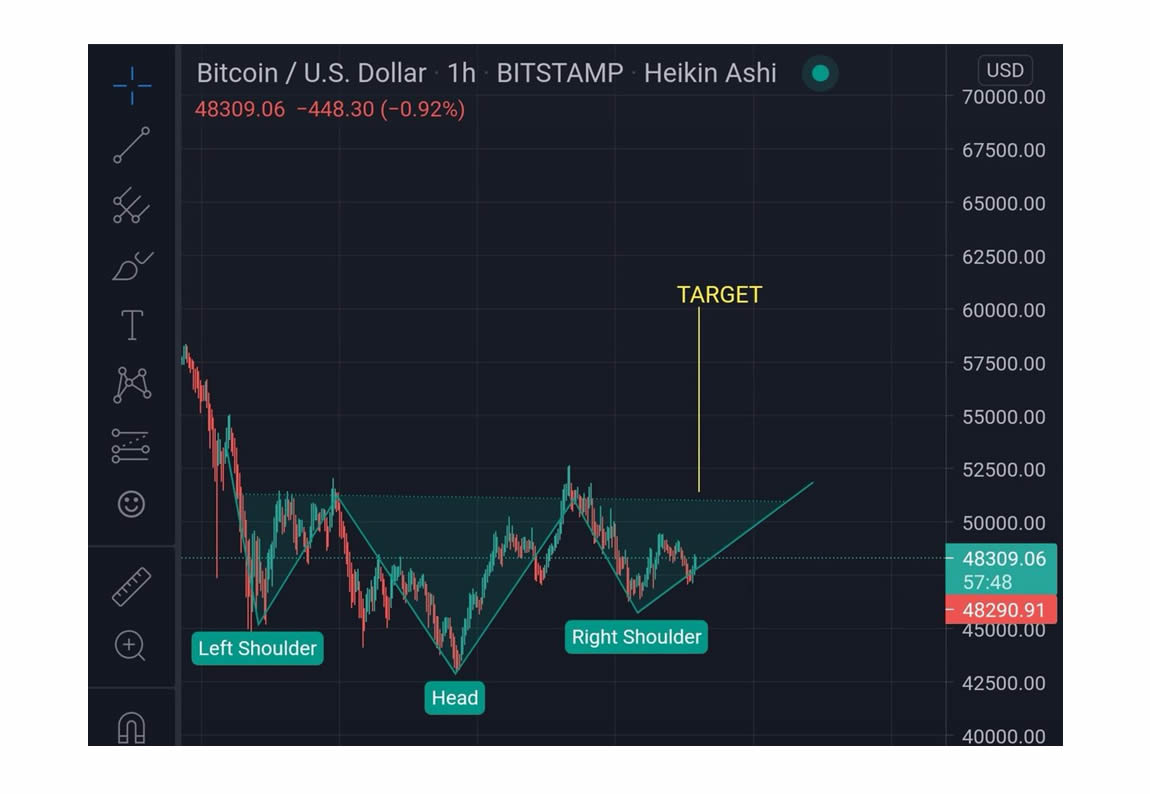 The following chart shows us where Bitcoin is likely going in the near future.  The blue part of the chart shows us the re-accumulation periods and above the blue part, how long they lasted.  In January 2021, Bitcoin had a 30 day re-accumulation period.  We are in another one now for 2 weeks and counting.  Once Bitcoin truly breaks out it will begin the next leg up in the current bull market.   We still recommend to customers to resist the urge to sell your Bitcoin.  It is so scarce, you may have to pay a lot more to buy back in.  Since Neutral ATM bought in to Bitcoin, right after the corona virus dump, we know the price will never reach those levels again.  Therefore, we cannot sell our Bitcoin unless we are transferring it to another scarce asset.  That is all we plan to spend Bitcoin on.  Here is the chart: 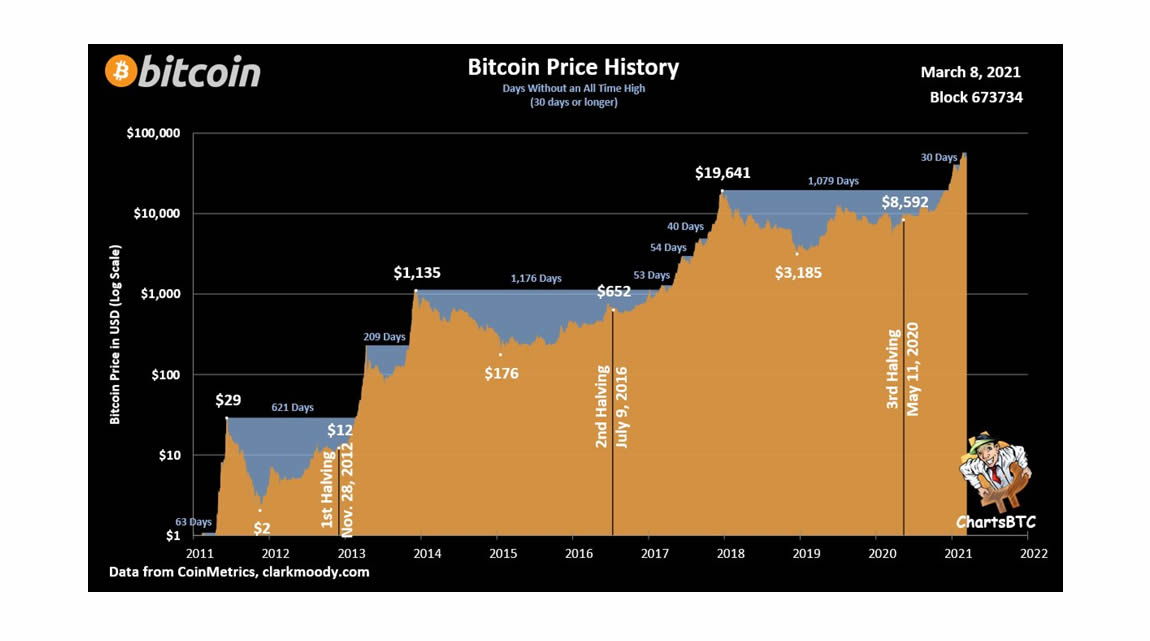 Bitcoin is becoming the only viable lifeboat for investors in an age of out of control inflation.  There will be many more stimulus packages voted on.  Many more promises made, including the promise that inflation is not rising much.  However, the cost of food, pharmacueticals, education, and energy are rising at alarming rates!  This is frightening, but not for those who get on the Bitcoin lifeboat!  Invest soon before you get caught in this inflationary storm coming our way.