Bitcoin got to $42K and this morning.  It started dumping again to $37K.  Obviously, a tug-a-war is going on.  Forces are trying to hurt Bitcoin.  Many reasons why, we don’t know for sure.  We have heard a certain Bitcoin whale is attempting to be outed.  That is speculation.  However, Bitcoin has a support level.  It has already dropped below $42K.  The next level is $37K.  Bitcoin held that level and is above it now.  See this chart below.  It predicted a v shape recovery off of $42K, we see that off of $37K.  But either way, Bitcoin needs to close this week close to or above $40K.  This is the 21 week exponential moving average support level.  This level must hold for Bitcoin to remain in a bull market.  We believe and see that it will.  One year and two weeks after the halving, is far too soon to end a bull market according to all previous cycles.  Remember, each cycle rymes.  History shows us we can look back on past Bitcoin cycles for clues as to what will happen to this one.  Here is the chart below.  Watch for the V shaped recovery like we saw on Wednesday afternoon!  We expect that by Sunday!  We are not saying Bitcoin will moon shot from here to $70K.  Just that it will recover above $40K.  Here is the chart: 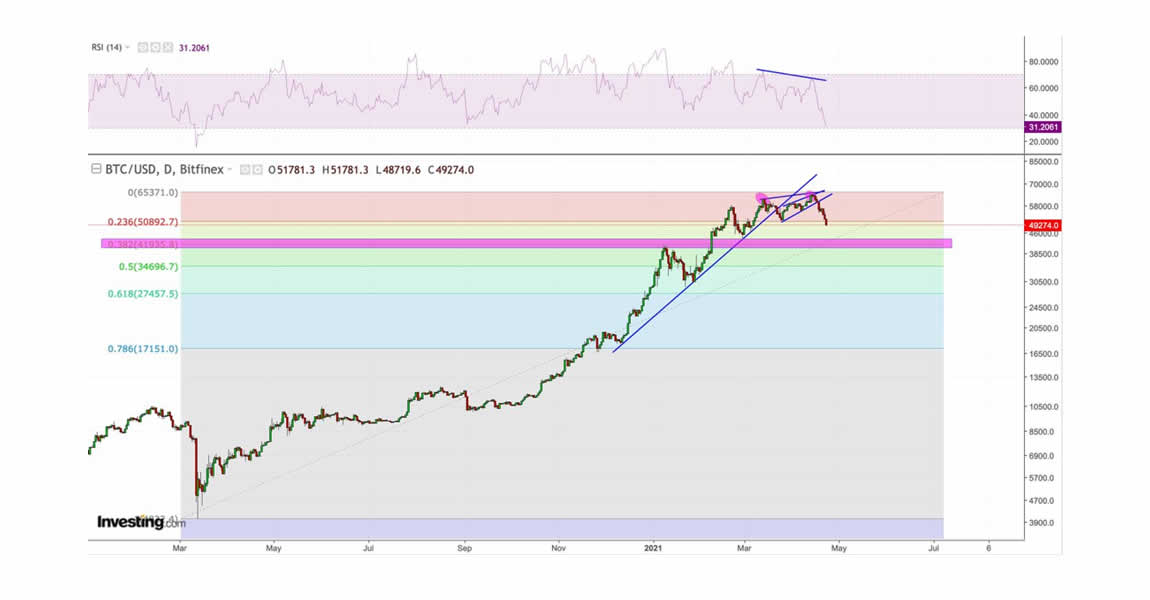 Remember what legacy financial experts are saying about Bitcoin:

"Crypto has come from nowhere to be a force in the market ... it's here to stay. Cryptocurrency is not going away," The Carlyle Group's David Rubenstein

Why do powerful elite’s want to hurt Bitcoin?  Even though they fail, everytime?  The reason is the PetroDollar Monetary System!  Most wars since Vietnam have started because of the PetroDollar.  Before that it was for hoarding Gold.  Remember, 10-12 individual families privately own all the world’s central banks.  They loan money to governments and their banks.  They control all credit and receive debt payments.  Cars, homes, and anything expensive is bought on credit and paid back to this PetroDollar Monetary System.  This is where the term Debt Slave comes from.  Slavery originated in Africa where English elites learned they could replicate the glass beads being used there as a currency.  They came back to Africa with billions of glass beads and bought the entire continent.  That is where the slave trade started!  Debt slavery has done more harm to humanity than most anything else mankind has ever created.

Now we are hearing Bitcoin creates environmental catastrophes, because power/mining equipment is the proof of work for Bitcoin mining.  Below is a chart that shows carbon emissions really started growing after the Federal Reserve was created in 1913.  It went Parabolic when WWII started.  Bitcoin was invented in 2009.  Bitcoin is the solution to everything the central banks are doing to humanity.  PetroDollar wars, political shananigans, Gold manipulation.  It would all end if Bitcoin won over fiat currency globally.

Here is the chart below showing historic, world carbon emissions.  Bitcoin makes zero difference on this chart.  The fiat monetary system does: 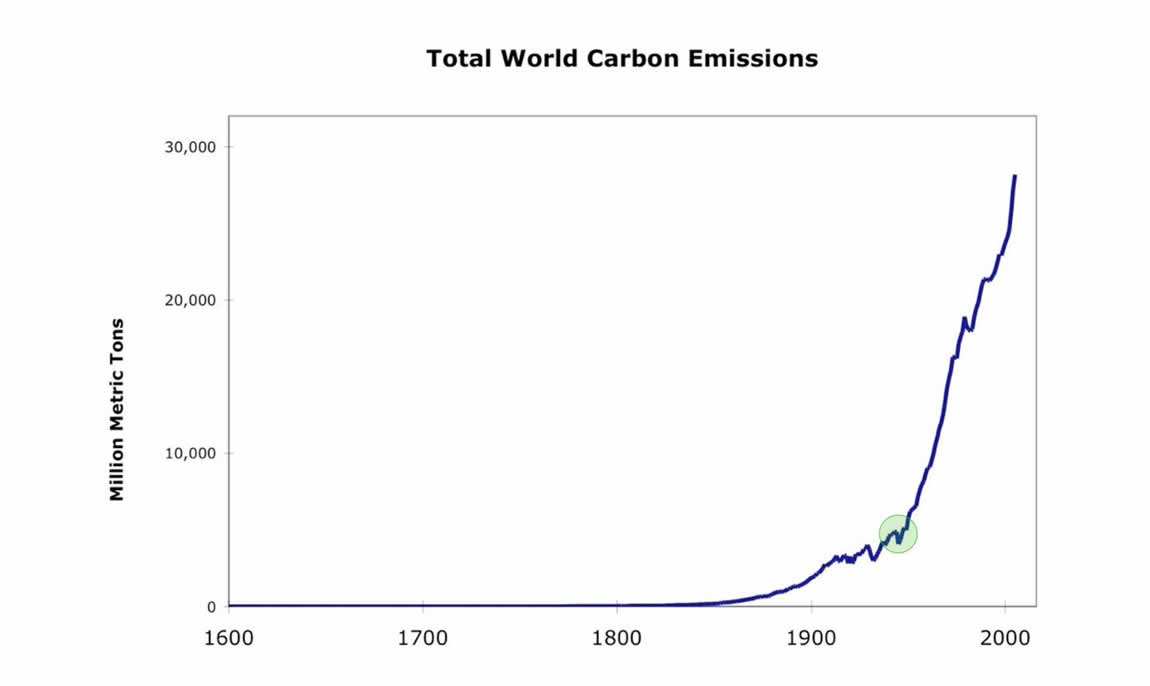 We are not surprised at all by manipulation and attempts by China, Tesla, or even the US government to hurt Bitcoin.  Earthquakes close to the three gorges dam are being reported right now, just as China announces a crackdown on Bitcoin mining.  Most Chinese Bitcoin mines are downstream of the three gorges dam.  The thing is, Bitcoin does’nt care.  It’s adoption is a separation of money and state!  Even if every mine in China shut down.  Bitcoin would dump again.  Maybe all the way to $20K!  We certainly would not be happy with that.  But we would NOT sell.  Not even at $10K.  The difficulty adjustment would kick in, in two weeks time.  The mining in the US and every other country but China, would be relied on.  The difficulty adjustment would reduce difficulty drastically, so that the remaining mines could pick up the slack.  They would keep mining blocks every 10 minutes.  Bitcoin has proven anti-fragility.  It would survive the loss of Chinese mining!  That could happen.  We don’t like it, but it IS possible.  Bitcoin is good for humanity because it takes money away from the few elites, and allows all of humanity to create wealth and prosperity.  Just by owning the worlds most scarce asset, which is digitally programed to cut supply every 4 years.  Holding long term will solve debt slavery, taxation, wars over Gold or the PetroDollar.   The more you read about central banks and what is behind them, the more you learn.  State and money MUST be separated for humanity to prevail!  Bitcoin is humanitarian.  A separate and decentralized monetary system, based on Bitcoin, would harmonize the disharmony the current monetary system has created.  This will take over a decade to play out.  Maybe less but we doubt it.  Let’s see what happens.