The Natives are getting Very Restless, Got Bitcoin?

Max Keiser of The Keiser Report:
“Interest rates will continue to rise until a new, neo-feudal order of Lords and serfs has been re-imposed on most of the world’s population. The cost of proper food, clean air and water will be unaffordable by 99% of the world.

What Max Keiser is talking about is the fact that inflation is required in order to keep the current debt based monetary system alive.  Rates have to rise because if they don’t a deflationary crash will destroy all global economies.  These rates have not really slowed down inflation.  CPI is still at 8.2%, 10 months since the rate increases and hawkish stance began.  Now there are riots all over Europe, and rate increases are expected in November of another 75 bps.  This will further create the scenario of the dollar milkshake theory.  Again, this means the DXY breaks up, all of Europe’s economies break down, they have to respond by raising rates as well.  Which brings pain to their economies.  This leads to a rush into the US dollar, and the DXY spikes some more.  This is an all out effort by the Fed to force other countries to exchange their currency for USD.  It is not a sustainable situation.  Throw in the outright theft in government in the US, and what we have is the Government power brokers stealing or laundering from the treasury before the great monetary collapse begins!

Does this sound far fetched?  Here is proof.  Germany is in absolute free fall, and the Bank of England had to backstop their UK pension system before it went bankrupt overnight by instituting emergency quantitative easing a week or so ago.  Here are the insolvent companies in Germany right now: 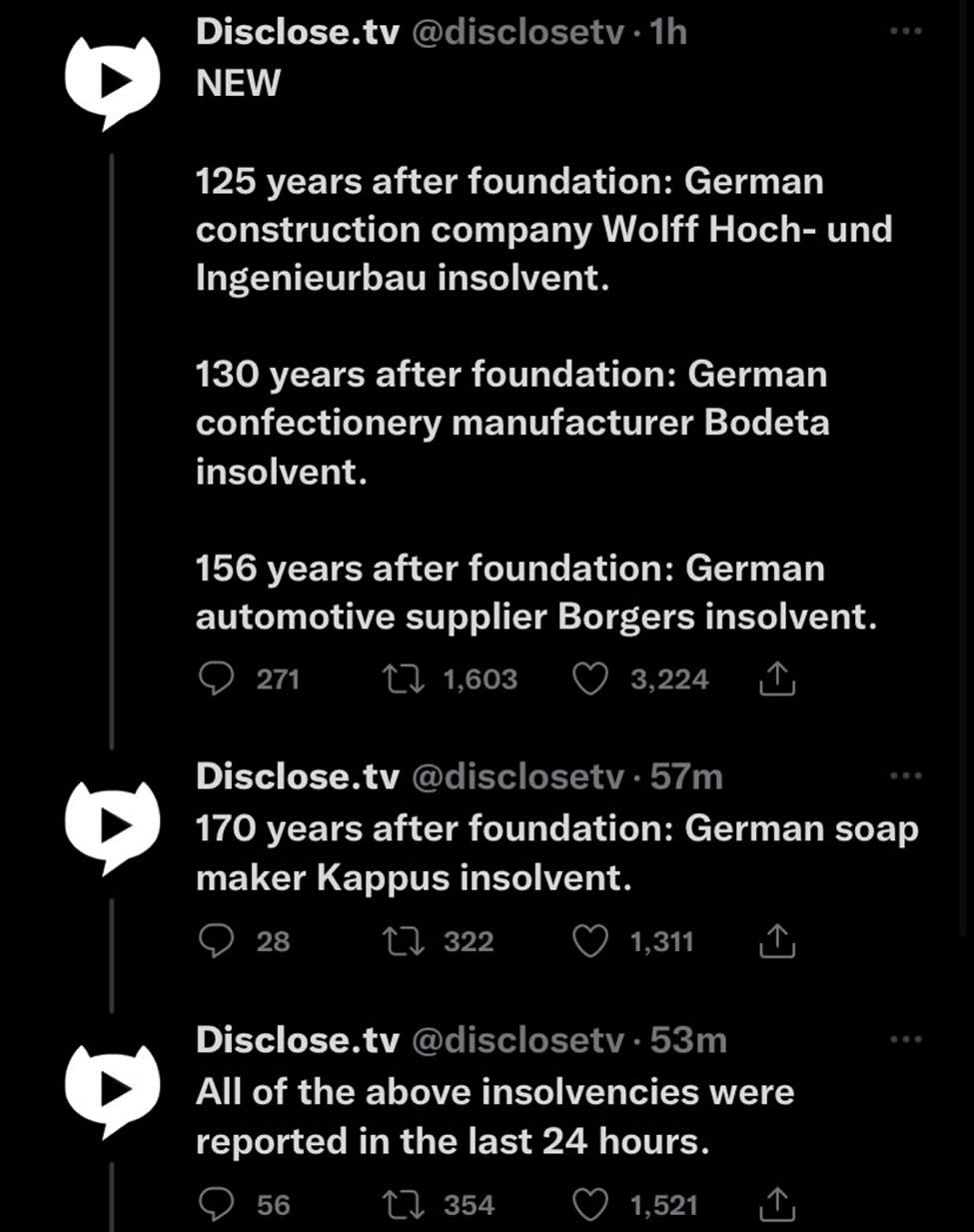 In about a week, UK, Germany, and soon France are all getting destroyed economically.  Meanwhile, the US dollar index (DXY) is printing an inverse head and shoulder pattern with follow through.  Obvious in this chart below: 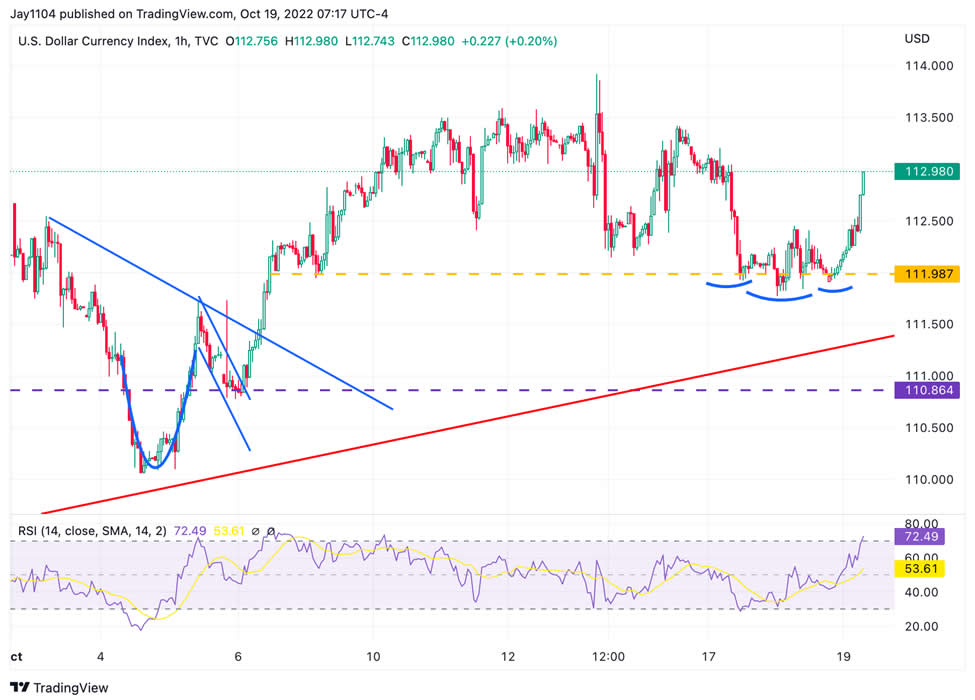 Riots in France rage on, due to inflation, deterioration of the standard of living, and anger at the effects of the dollar milkshake theory on real life in France, click here to view on Twitter.

Then you have to understand that rate increases, have done little, to slow inflation, or help the economy here in the US.  They hurt Europe’s economies, and force them to convert their currencies to dollars, and buy US treasuries.  That brings USD home to the US, and strengthens this economy at the expense of Europe.  It is financial warfare, and it is going on now.  Yet, in the end, it will likely lead to a melt up for the DXY (US Dollar index).  Whatever the top for the DXY ends up being, at that point, the quantitative easing and possibly rate decreases will begin.  The Fed pivot.  Once this begins, the neo-feudal order of Lords and serfs really kicks off!  That is when hyperinflation starts to set in.  As it picks up steam, as inflation gets worse, that is likely the time frame assets like Bitcoin, Silver and to some extent Gold will take off.  They are hard assets, and decentralized.  Yet only Bitcoin is digital and truly fungible.  In other words, can be transported in large volume across borders with ease.  This is the true value that Bitcoin brings to the table.  It is a free market, decentralized monetary system that is the life boat out of the system we are stuck in now!  This next chart shows how 60/40 stock and bond portfolios have faired in this environment.  -35% loss.  By comparison, Bitcoin is up 3% this year: 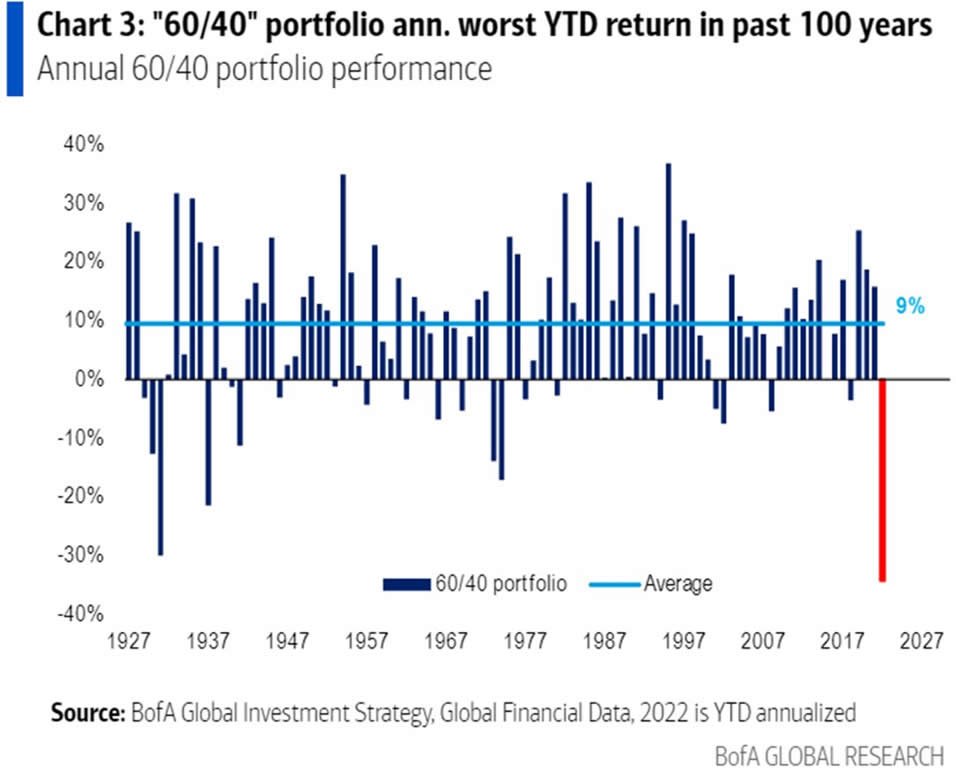 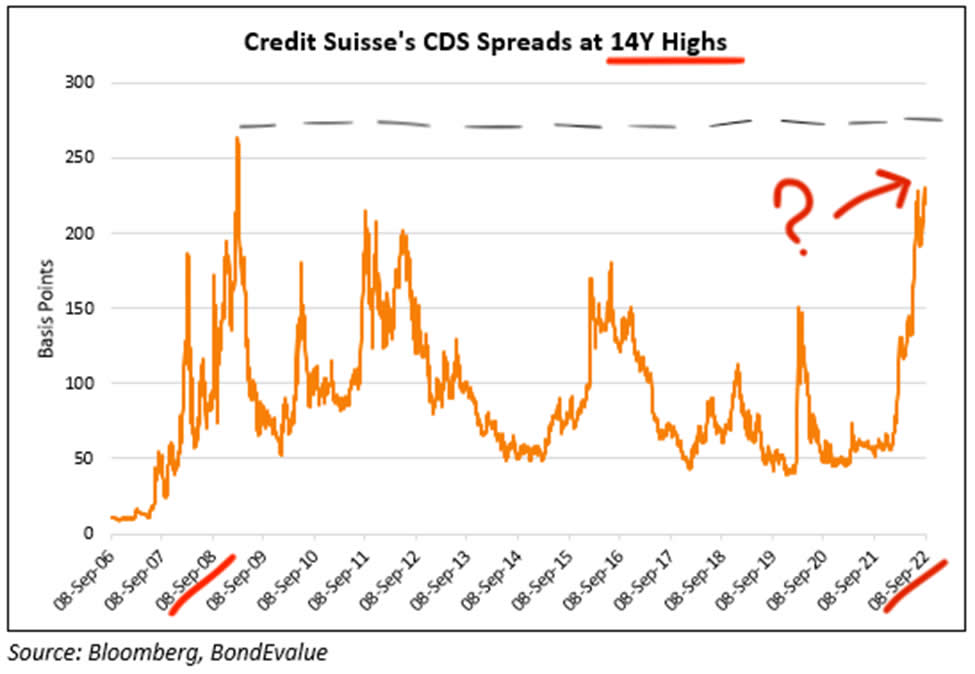 So as you can see, the monetary system is at it’s end.  Even past it’s end.  Bitcoin truly is the life boat, and Silver is not far behind it in terms of decentralization, and scarcity!  This is not financial advise, and we are not financial advisors.  Invest in scarcity, and invest in the new system, not the dying system, which is fiat.

This billboard appeared in Milan, Italy: 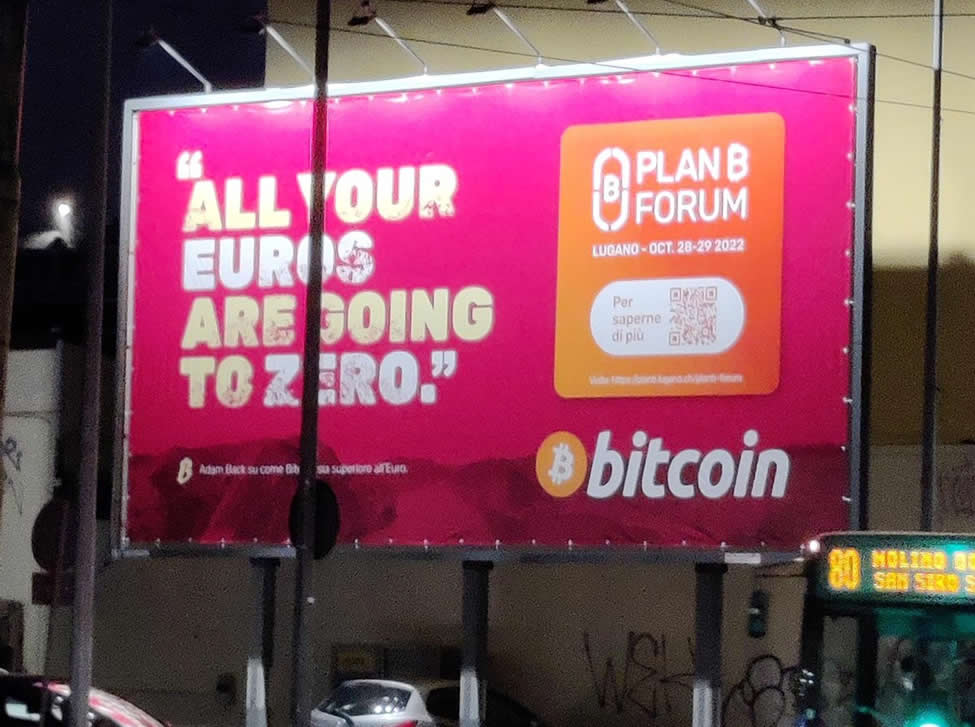