Tesla Bought Bitcoin, So What?

What does Tesla buying $1.5 billion in Bitcoin and putting it on their balance sheet mean, long term?  Short term it means the new ATH is now $48,277 as of early this morning.  If you follow charting, here is a cup and handle chart of Bitcoin, all spelled out for you.  It goes back 38 months: 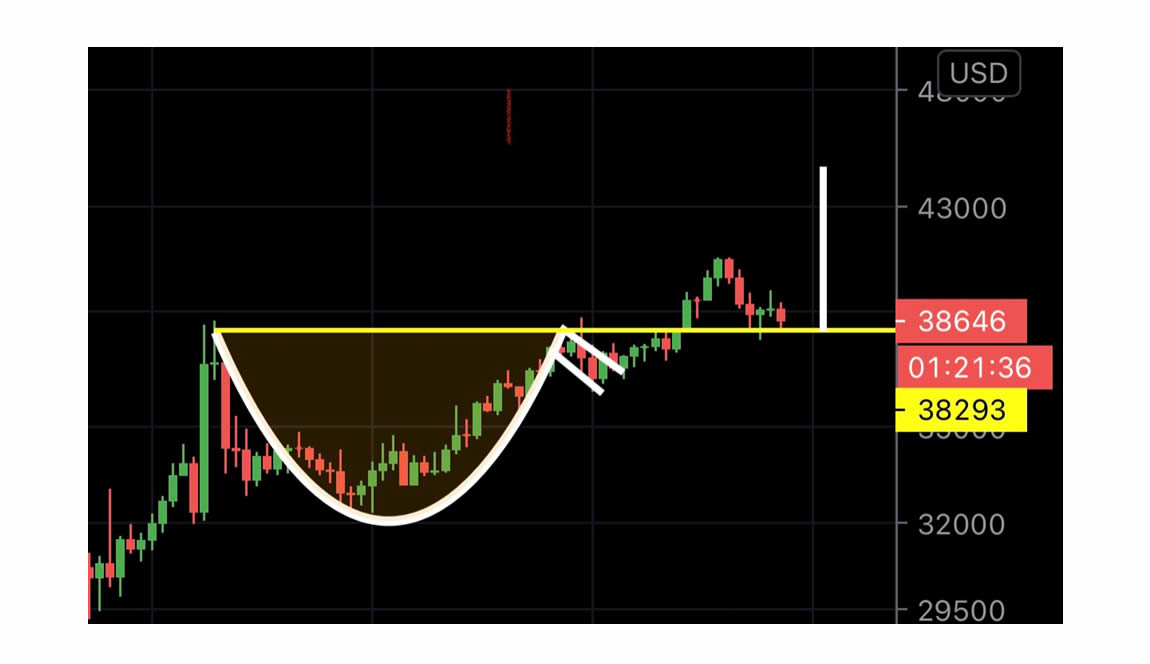 This bull run is far from over.  The Tesla announcement Monday was predictable.  Tesla and Spacex attended the Bitcoin for corporations seminar last week.  Expect Spacex and Apple among other corporations to announce Bitcoin on their balance sheet at some point as well.  Bitcoin just finished a month long reaccumulation.  Tesla’s announcement lifted Bitcoin out of this reaccumulation descending channel and it is running up again, probably for many weeks into the future.  Below is a long term chart imposing the trajectory of the 2017 bull run onto the current bull run: 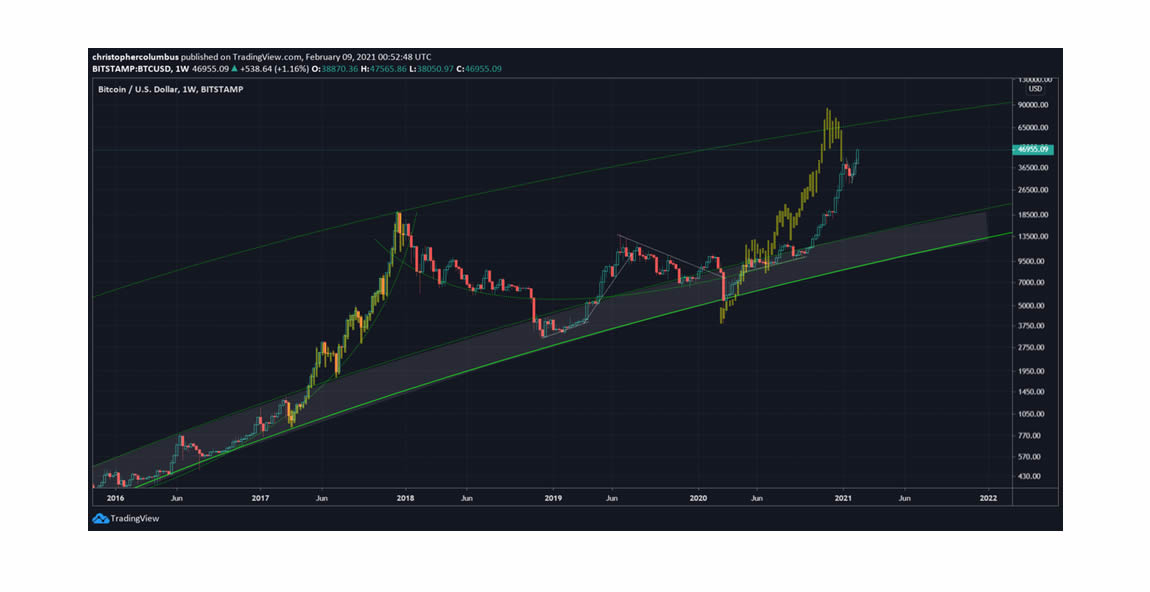 Now lets look at global macro to get a better sense.  MicroStrategy put $1billion of Bitcoin on their balance sheet starting in September to present day.  Here is their stock trajectory since then: 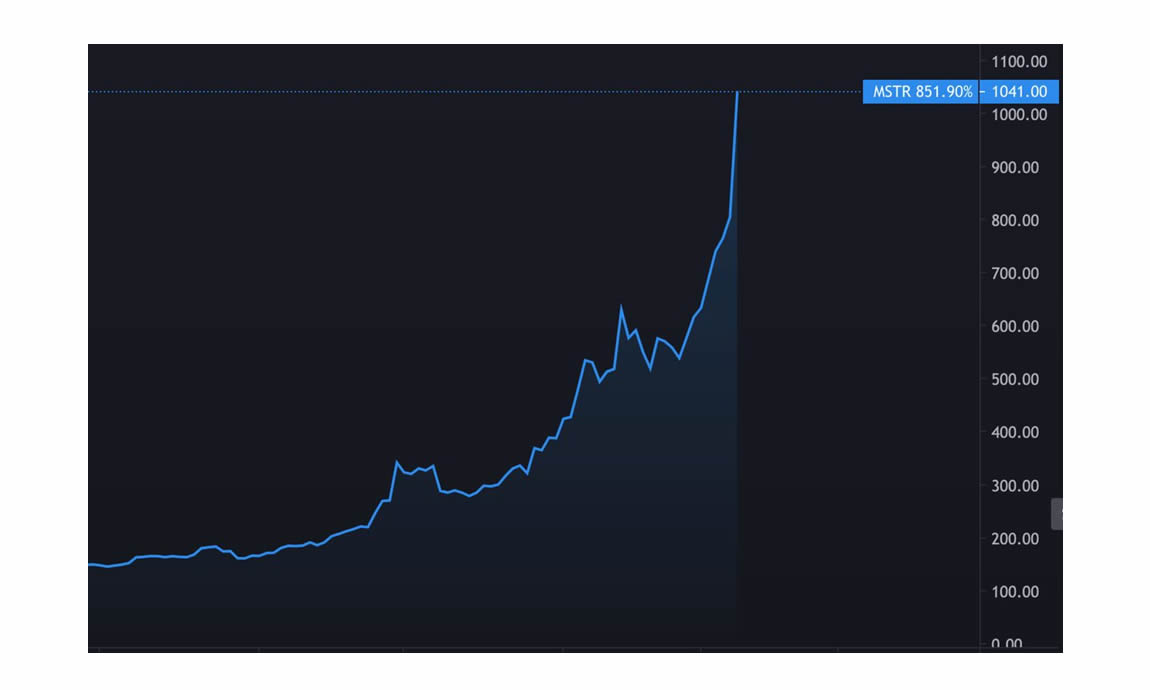 Not bad.  Tesla may very well follow that, it has done equally well.  Neutral ATM owns no stock, but we trust MicroStrategy and Tesla moreso than other stocks, simply because they own so much Bitcoin.  What we learn from them is many corporations are adding Bitcoin as a reserve asset on to their balance sheet, so as to hedge inflation and not hold US dollars.  Hedge funds have done this for their investors, but more as a hedge against inflation.  At some point pension funds will begin making these moves as well.  Regulation will have to come to Bitcoin in the US because the Fed cannot just let the USD inflate to zero value.  But they cannot regulate Bitcoin out of existance.  China, India, and Lebanon tried to regulate Bitcoin and they lead the world in Bitcoin adoption because of it.  Especially China and Lebanon.  Remember, we have discussed the difficulty adjustment exstensively.  That adjustment keeps the blockchain network strong even if stiff regulation comes to US exchanges or other onramps to Bitcoin.  As holders, we have to fight through regulation and resistance, otherwise there is no prize at the end of the fight.  Someday Neutral ATM believes the Fed will come to embrace Bitcoin more than they do now.  Probably after Janet Yellen is out of the position she is in.  Below is a chart of the Fed balance sheet as % of GDP going back to 1913 when it was created: 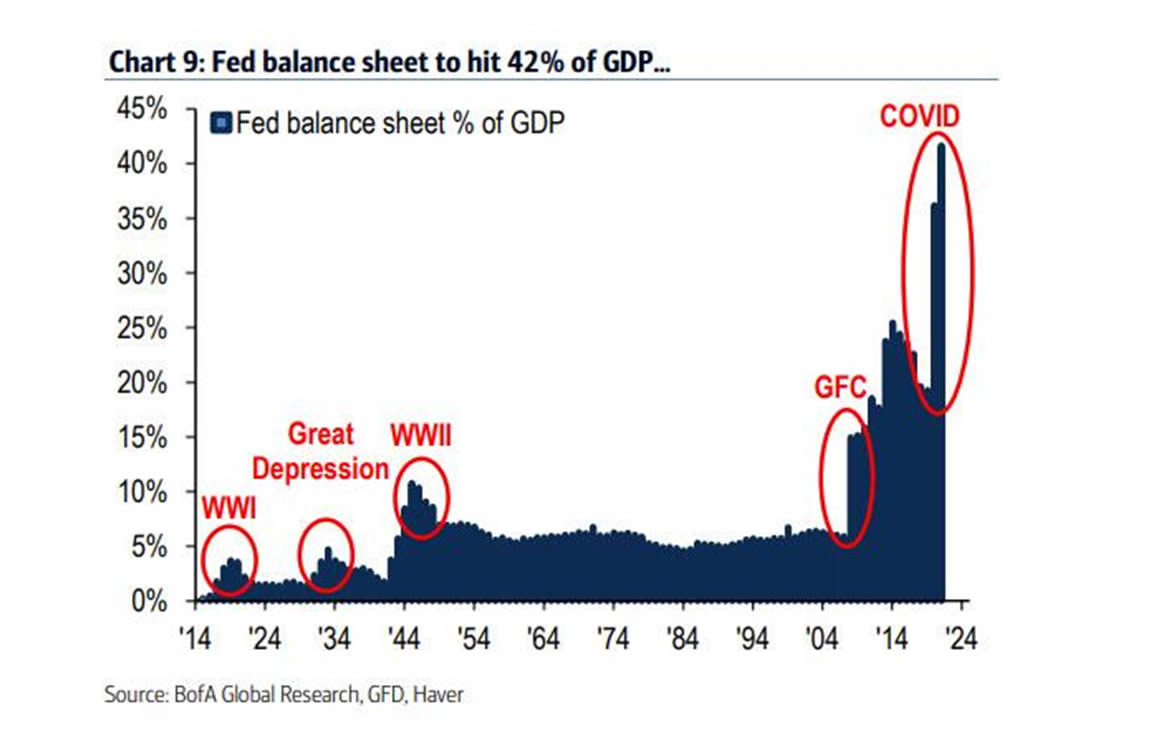 In addition to this if the proposed $1.9 trillion covid stimulus bill is passed in the congress and senate, that would be 40% of all US dollars printed in a calendar year.  That will eventually, probably by 2023, lead to at least 35% annual inflation.  Please don’t forget, as we keep preaching, use the chapwood index for inflation, not the CPI.

Money supply growth, an extremely weak USD, zero and eventually, negative interest rates all lead investors to alternative hedge assets.  The strongest returns among hedge assets has been Bitcoin, for over 10 years now.