2016-2017 bull run!  Today or tomorrow the pi ratio will cross.  That is the 111 day moving average crossing the 350 day moving average.  Perhaps this pump on 04/13, will prevent that cross from happening.  The Pi cross is a bearish yet unproven indicator.  The fact that all smart money is HODLing their Bitcoin as the below chart indicates is a bullish indicator.  The log growth curve also shows Bitcoin easily getting over $100K by June.  Here is the realized HODL ratio chart: 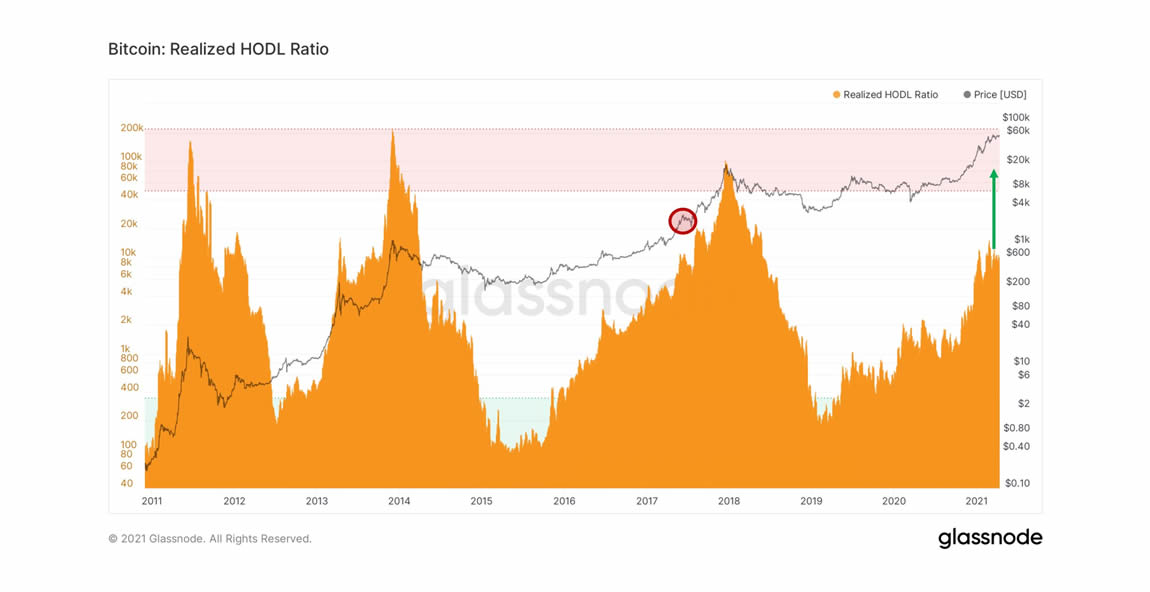 The below chart shows log growth.  Bitcoin, if it does stay in this channel which we believe it will, should cross $100K between mid June and early August.  Neutral ATM believes it will happen some time in June, early July at the latest.

Bitcoin treasuries.org shows us that over $90Billion worth of Bitcoin is now sitting in corporate treasuries.  If Bitcoin can get pensions to add it to their treasuries during this bull run, that number will rise exponentially.  Wall Street is adopting Bitcoin more and more this bull run unlike any past bull run, click here to view.

Since this list was downloaded, Bitcoin has climbed 5%.  Amazon should be announcing Bitcoin on their balance sheet at some point in the not too distant future.  That is a prediction we have held as a belief for a while now.  Perhaps they are waiting for a better time to announce this, but there are some indications Amazon has been stacking Bitcoin.

For those who still compare Bitcoin to the Tulip bubble of the 1600’s or other market bubbles, see this chart below.  Bitcoin goes through cycles and we know 2022 will be a bear market.  We bought Bitcoin so cheap in early 2020, sub $7,000, that we are not selling.  But many will and we expect a drop in the price next year.  We know that going in.  Experienced Bitcoiners expect this and hold on for dear life, HODL.  It creates a comaraderie that is hardly seen outside of Bitcoin.  But most importantly, look how Bitcoin always recovers from bear markets, unlike Tulips and other famous bubbles: 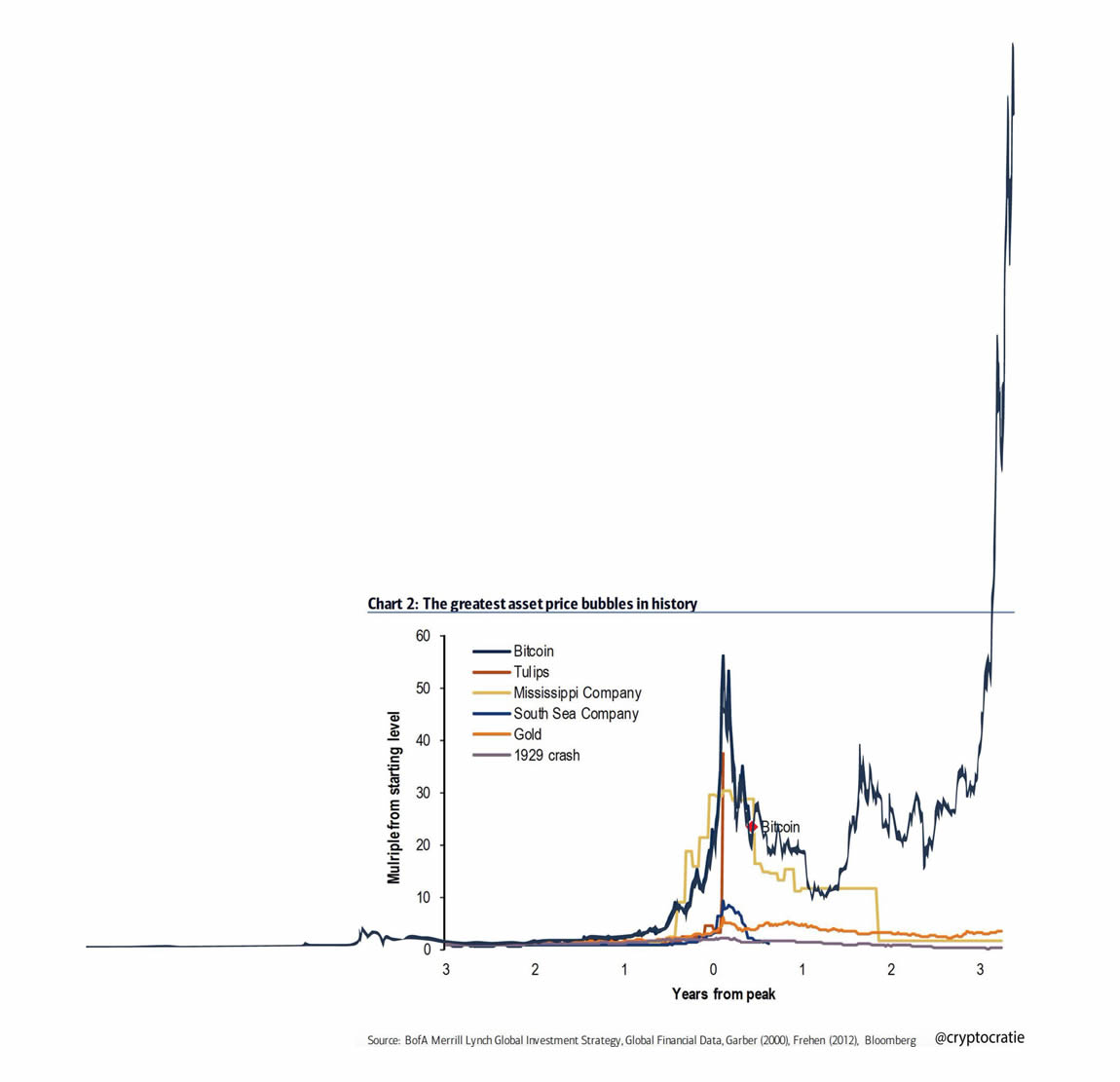 If you think the 2021 “bubble” is big wait until 2025 or 2029!  Neutral ATM will still be holding on for dear life for both of those “bubbles” too.  It pays not to sell your Bitcoin if you buy it cheap!  Remember, the definition of cheap Bitcoin changes every 4 year cycle. 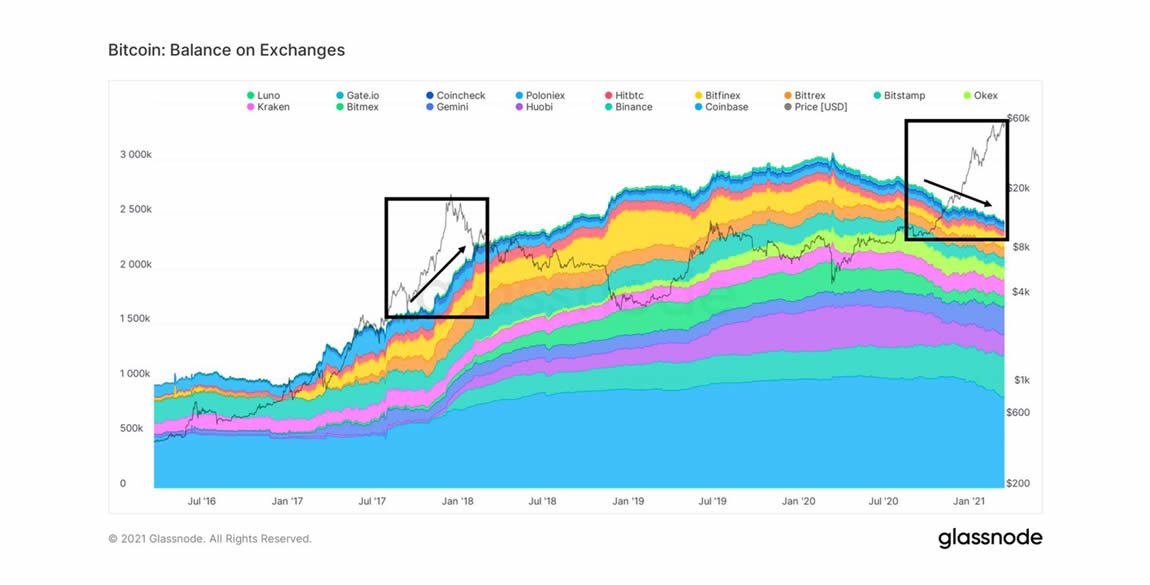 Finally, the SPY (S&P 500) chart priced in Bitcoin.  It does’nt look so good does it?  Bitcoin just passed Spain as the 10th ranked currency in the world and it will likely reach the top 5 or 6 later this summer.  Bitcoin has provable scarcity, it cannot be conviscated like fiat currency worldwide can be.  It is the only truly decentralized currency.  Someday, we don’t know when Bitcoin will be the number one currency in the world by total value in circulation.  It started with a value of $0.008 per coin in January 2009.  Look what Bitcoin is doing to SPY below: 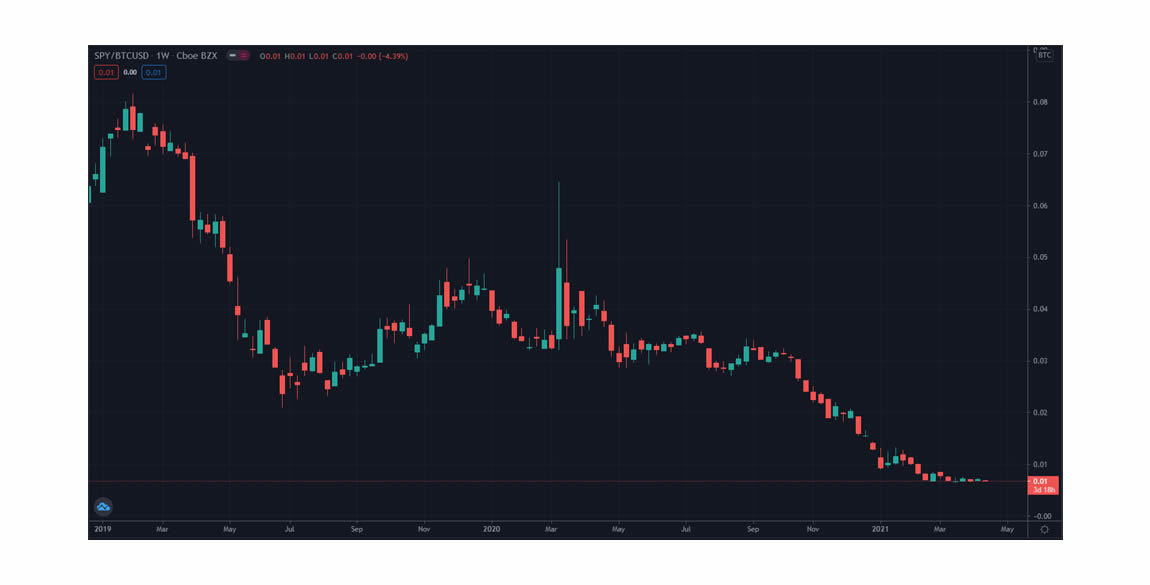 So, should you be collecting Bitcoin at $64,000?  Yes, that will be cheap in a few months or weeks.  Zoom out and look at the big picture.  If these charts are’nt enough, consider that the consumer price index (CPI) was announced today as being up 2.6% year over year compared to 2020.  That will be a major trend into the future.  Inflation is here.  Fiat currency is growing in supply while Bitcoin is shrinking.  Eventually the whole world will see the value in scarcity.  Wealth only holds value in scarce assets.  There is no more scarce asset, than Bitcoin.  Soon, Neutral ATM will offer Bitcoin via credit card and debit card on our website.  www.neutralatm.com.    We will advise when it goes live.  WE offer low rates for large purchases of Bitcoin online.  Once the credit card/debit card option becomes available we may even reduce the limit restriction to buy Bitcoin online!  We are totally commited to your wealth preservation in these trying and difficult times of inflation worldwide!