SPX Ascending Wedge, But For How Long?

The SPX is in a massive bearish divergence, we know the Fed supports the SPX with QE (quantitative easing and stimulus).  It appears likely to Neutral ATM based on the political rangeling going on right now, that sometime after January 20th would be a logical time for radical changes in the SPX and other stock indices.  How long after January 20th and how radical the changes are, are anybodies guess.  But charts don’t lie and this chart below shows massive divergence.  The Fed has bought up previous dips.  That may very well happen again.  At some point the SPX, DJIA, and Nasdaq will have to pay the piper.  There is really no way to know how long this will take to play out.  With a Biden Harris administration already announceing massive stimulus and QE (quantitative easing) and the Fed already attempting to reach or exceed 2% CPI inflation which would equate to 20% real inflation most likely, the base case for pushing the SPX ascending wedge up higher is there.  That sets up the market for an even bigger crash whenever that does happen.  Here is the chart: 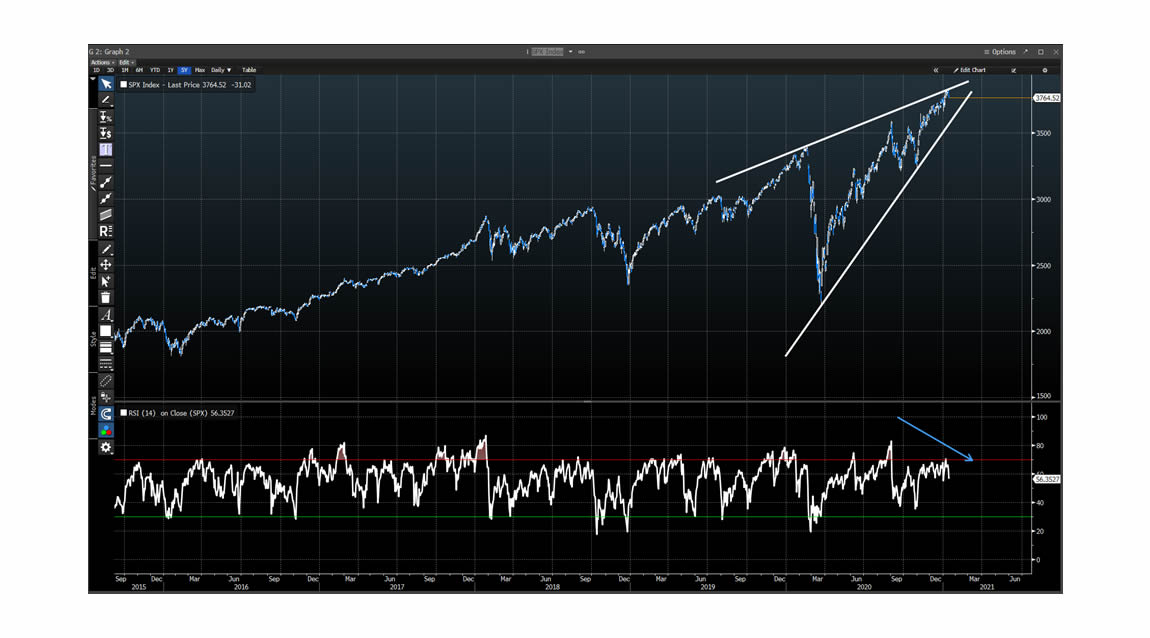 Bitcoin climbed all the way to $41,983 a couple weeks ago which is now the all time high.  However, for two weeks Bitcoin has been languishing in a symmetrical triangle.  Based on technical analysis basics, it is 50/50 on whether Bitcoin breaks up or down from a symmetrical triangle.  We have seen dozens of these during this bull run and there is no reason to believe that this one will break down.  Neutral ATM still sees Bitcoin in a bull market trend into the beginning of the 4th quarter or maybe late 3rd quarter 2021.  We cannot time tops perfectly, we need to carefully approach this top with a laddered sell strategy which we have advocated in the past.  Here is the chart below:

With everything going on in 2021, caution is a good idea.  Bitcoin will remain in the bull market but there are many variables that are more geo political in nature.  We cannot tell how they will affect all markets.  If Bitcoin does dump, we see support floors for it at $30K and several below that down to $20K.  Neutral ATM is not selling Bitcoin even if it drops to $20K.  We know there are still legs in this bull run and we still see tops in the $160K to $220K range.  If on August 31st Bitcoin is only at $100K we must re-asses.  Rest assured, Neutral ATM will announce when we sell the first 20% of our holdings.  We will also announce where we move it to.  For now Gold and land make sense.  We always keep options open.  Bitcoin doubled last month.  It would not take much for this to happen several more times over the next few months.  We do need to asses geo political events because if a radical change does occur, the market can be changed.  We saw this with corona virus in mid march.  We have to stay on alert, this is a dangerous time right now!

Neutral ATM sells and buys Bitcoin as little as $20 at a time!  You do NOT have to buy an entire Bitcoin.