Bitcoin does’nt have feelings.  It does’nt care if your having a bad day, or what the weather is.  It does’nt care if your team one the big game this weekend or not.  Bitcoin is a program.  It is a protocol made to pick the first computer mining on the protocol that correctly answers an equation it gives.  The winner receives the block reward for that block.  Blocks are rewarded every 9 minutes 40 seconds to 10 minutes even.  The Bitcoin protocol has been mining blocks on the blockchain for 147 months.  The exact day when the 147th month closes is April 5th, 2021.  Every 210,000 blocks the reward is cut in half, it is called the halving.  The halving kicks off a supply shock that behaves in stages.  Miners struggle, then some fail and leave the blockchain.  Those who survive are left with a better chance of winning more rewards.  The rewards increase for the miners as this supply shock begins to take effect.  As some miners leave the blockchain and shut down, remaining miners are left mining the same blocks in the same time.  However, the reward is half now.  Scarcity has begun to set in.  The network effect means that the more scarcity sets in, the more people need to invest in Bitcoin, in this case, because scarcity propelled the price per Bitcoin up.  The more demand increases, the more the price goes up.  Bitcoiners call this NGU technology, which stands for number go up.  Eventually miners, who were previously holding on to all their Bitcoin never selling it, have to capitulate and sell.  Why?  Because they have energy bills which are the lifeblood of mining Bitcoin.  The computers require energy.  Thus, a few miners sell some Bitcoin, then more.  This drives the price down, and a cascade ensues.  That sounds bad.  But, look at this chart: 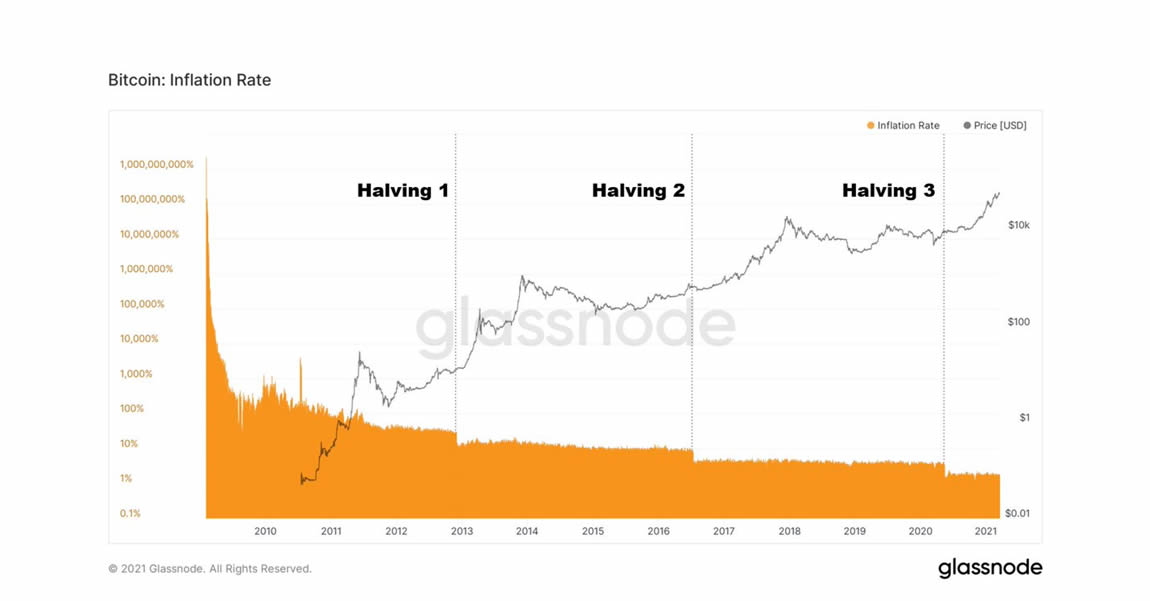 This chart goes back to 2009.  Back then, Bitcoin was $0.008 per coin.  The price is so low it does’nt even show up on the chart.  However, as time goes on, the price hits $.10 per coin.  Then $1 per coin, then $90 per coin.  Unfortunately, miners holding their coins have to sell to pay for their energy.  The cycle begins anew.  We Bitcoiners divide each cycle into seasons, fall, winter, spring, summer.  After the corona virus drump when Bitcoin fell 60% in 1.5 days, that was Bitcoin fall.  It had appreciated a lot in late 2019.  But corona virus spared no market globally.  Bitcoin capitulated and fell.  Neutral ATM bought in big after that, as we saw this cycle pattern forming.  Fall gave way to spring, and now Bitcoin summer.  Unfortunatly, next year will be Bitcoin winter.  Notice on the chart how the low points in each cycle are always exponentially higher than the previous cycle.  That’s NGU.  Number go up.  Because Bitcoin has no emotion.  It is made of math and energy.  The protocol says the miner reward is halved every 210,000 blocks and the cycle starts over because of this.  It has nothing to do with market dynamics, emotion of investors, it is strictly computer protocol, and it is predictable.  Zoom out.  Now, in the above chart you also need to watch the orange section below.  This chart is important.  The inflation rate of Bitcoin went 70 degrees down in the early year or so when Bitcoin started out.  This was because few people had adopted it.  Now there are 100 Million plus adopters of Bitcoin and it is growing.  Notice how the inflation rate of Bitcoin drops down at each of the 3 halvings Bitcoin has had!  Like a stairstep down, inflation is reduced.  The deflationary supply of Bitcoin being programmed into it, allows the network effect to kick off every 4 years with an 18 to 24 month bull run.  This bull run is programmed in to the protocol because the inflation rate of Bitcoin just dropped.  If that was not in the protocol, Bitcoin probably would not have survived this long.  Or at the very least, the price would be around $100 to $500 per coin right now.

Also, Bitcoin has a difficulty adjustment which carries out the primes in the equation, so if a faster computer is used by a miner, the difficulty adjustment factors that in and adjusts the equation.  The blockchain is built on an elliptical curve digital signature algorithym.  These are resistant to quantum computers.  They cannot break this type of algorithym.  Plus, if there were ever an EMP strike, and the power grid goes down, there are miners on solar and wind or LENR power sources, off the grid.  Price would drop significantly, but Bitcoin cannot be and has not been hacked, nor has it lost all of it’s energy globally, at the same time.  There will always be risks with Bitcoin, just like the stock market.  But to us, the risk is lower with Bitcoin than the stock market because of the protocol.  The nature of Bitcoin which means it is programmatic.  It behaves like a digital robot.  It does the same thing, generally, in 4 year cycles.  It can be trusted, it can be depended upon.  Not the stock market, not central banks.  Fiat currency is now being printed 15% to 20% of the supply of that currency world wide annually.  This started in 2020 due to corona virus and it is continuing in 2021.  Why will it decrease?  What will stop this from continuing?  Monetary supply has been generally loose since the Fed was begun in 1913.  US dollar has lost 98% of its value since then, at the least.

Therefore, in conclusion, as long as global central banks in Japan, China, EU, US, Canada, Africa, and South America print their currencies at ever greater rates.  Why would demand not run to Bitcoin with a programmatic deflationary supply?  Store wealth in Bitcoin, use it as collateral, never sell it.  Treat it like pristine Real Estate in NYC.  Pass it on to the next generation.

Recent price action for Bitcoin has been choppy.  A big pump last weekend and a dump followed by more re-accumulation this week so far.  We still see great upside for late March and into April.  Bitcoin is coiling up for a let up again.  Timing is not as important as the trend.  See the chart below: 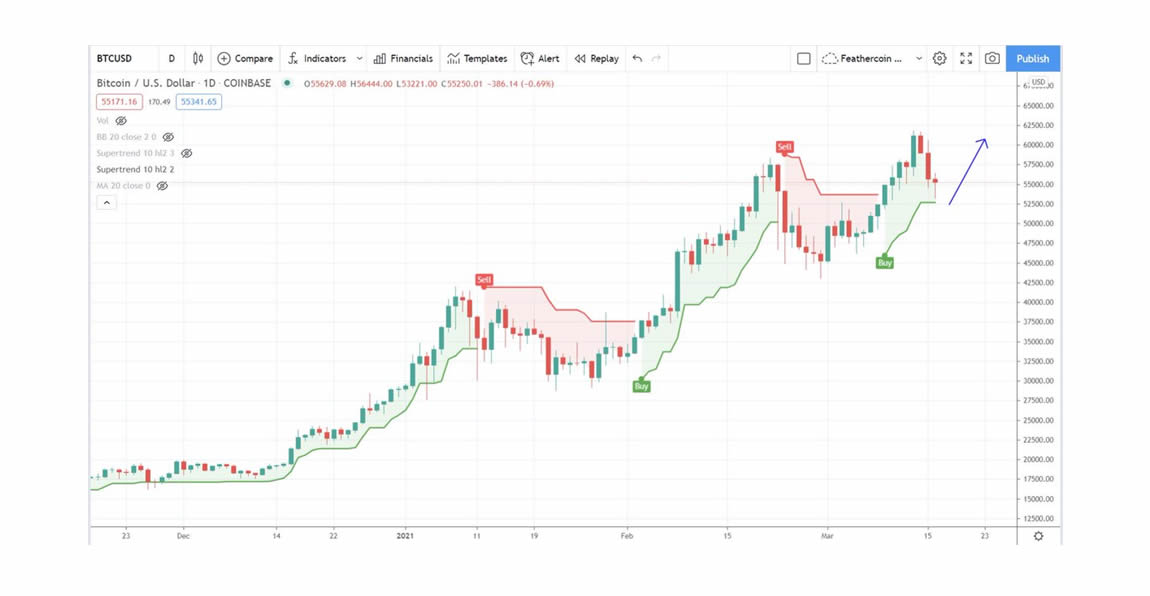 Moreso than with stock, Bitcoin ignores popular inveting themes.  It thrives when the dollar languishes and in the current environment, since 2008, the USD has lost a lot of purchasing power.  Accurate inflation tracking has largely been ignored by the main stream, but numbers do not lie.  Inflation is high, the US dollar is losing purchasing power, because of that, and the programmatic scarcity of Bitcoin, this creates the network effect.  Neutral ATM sees Bitcoin eclipsing $800K per coin sometime in 2025 when the next cycle is  nearing it’s end.  Store up and hold Bitcoin until then.  You’ll be glad you did!  Don’t let the Fed or any central bank control you.  Front run the world’s central banks and money printers.  Buy and hold Bitcoin!