We know there is angst and uncertainty out there while this election result hangs in the balance.  As frustrating as that is, staying level headed and thinking long term will bring normalcy and peace when it comes to investing.  Neutral ATM has a lot of Bitcoin tied up in tax deferred IRA’s.  At any rate, the impact on Bitcoin and Ethereum price will be neglible.  Gold will go up and has somewhat since last night.  Bitcoin is still consolidating under this $14K resistance.  Here is a chart where Bitcoin is compared to Gold and stocks since the May 11, 2020 halving: 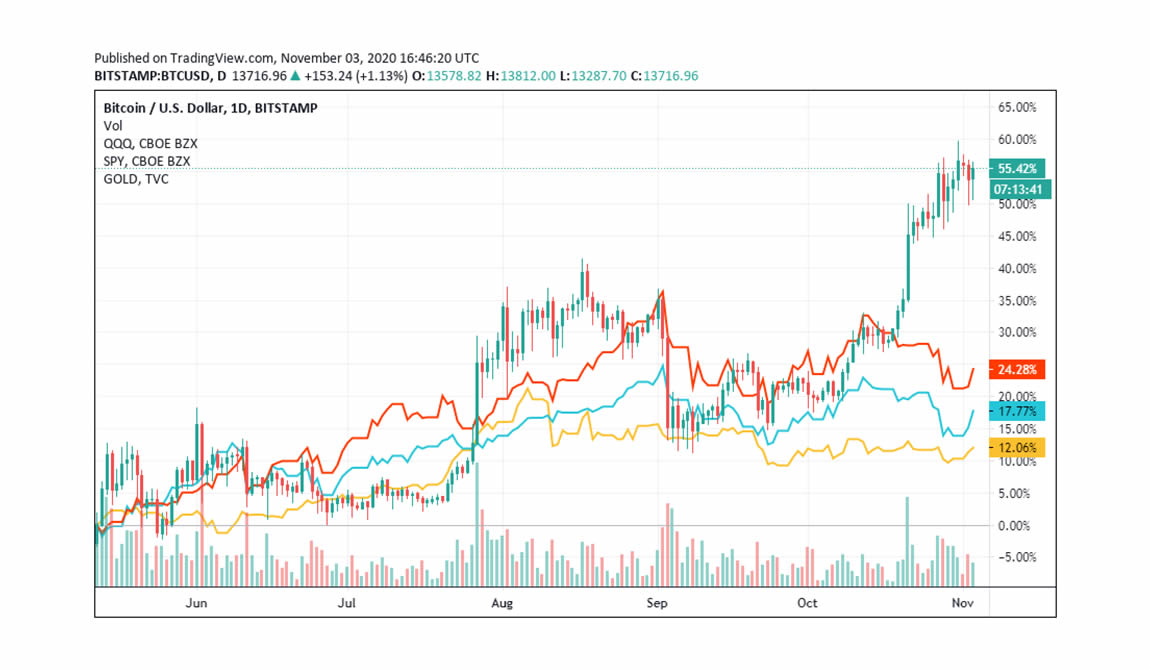 We calculated Etheruem since May 11, 2020 and it is 108.7%.  So clearly Bitcoin/Ethereum are winning over all other assets since the Bitcoin halving.  This disparity is greater going back to March 13, 2020 which was the corona virus dump.

Regardless of who ends up President of the United States, USD will be printed and stimulus in 2021 will be unprecedented.  Eventually, they will have to stop printing.  Deflationary high tech industries cause prices to come down as the technology builds these products cheaper.  Technology is deflationary.  Then, once the baby boomers are all drawing retrement there will be a huge strain on pensions over the next 3 to 7 years.  Between the pensions being required to pay out, and at the same time keep returns high, and the smaller numbers of employees in the work force due to the sheer size of the baby boomer generation, Bitcoin will have the chance to truly go mainstream.  The reason is its high returns, verifiable scarcity, and hedge against inflation.  Verifiable scarcity we keep discussing makes it such a great hedge, and mass adoption brings it to the pensions and institutional investors as they look for ways to boost returns.  Zero and eventually negative interest rates bring zero yield from bonds and force pensions out the risk curve, leading them to Bitcoin.  The fed will have to print more to offset deflation as mentioned above.  This does’nt even consider the affect Covid 19 has had on the global economy.  This is a 90 year cycle like the 1930’s great depression and 1860’s with the Civil War.  Bitcoin was created in 2009 to be a peer to peer digital payment system with programmed in scarcity which could not be changed.  11 years and 10 months later Bitcoin has mass adoption, the economy is in crisis and the retirement wave is starting to have an impact on M2 money supply and out of control debt to gdp ratios.  Bitcoin was made to solv these kinds of problems.  It may take well into 2021, but we are seeing more and more mass adoption.  Below is the latest chart showing the public companies that own Bitcoin and what their holdings are: 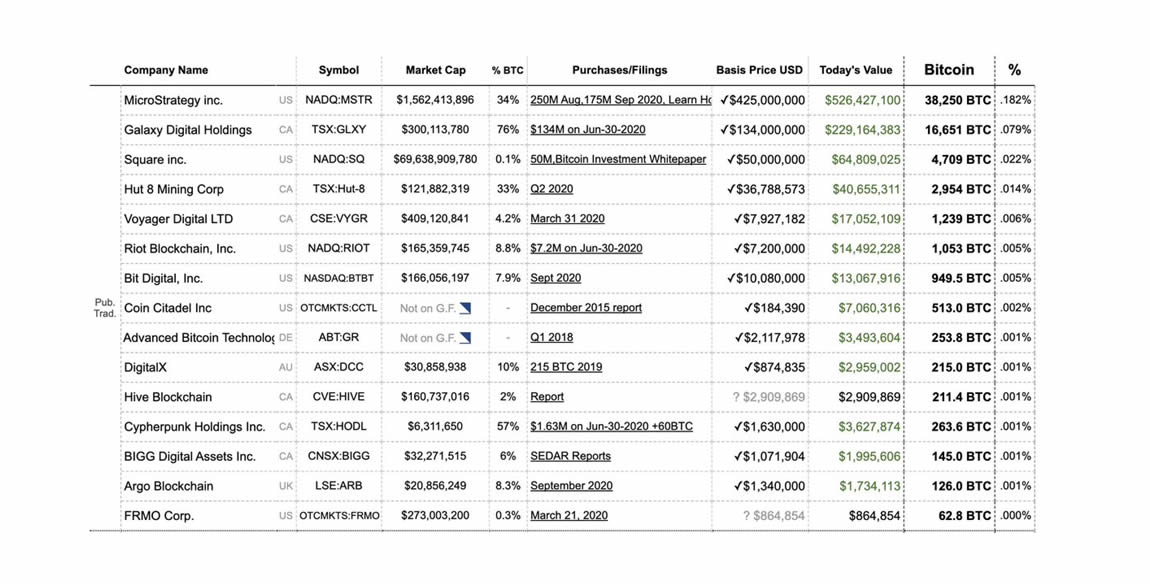 As this is being written Bitcoin has bounced off of $14K twice since last night and it may go back to the $12K resistance level.  Neutral ATM expects this amount of volatility with this election result uncertainty, and the huge resistance since 2017, which $14K represents.  It took 200 days to break this kind of long term resistance and hit the ATH in 2012, and 2016 bull market cycles, and we expect a possible longer term accumulation period for this bull market cycle.  However, once $14K is broken, the growth curve will be steep and then parabolic.  The charts simply look like accumulation will take a while longer than many expect.  Ethereum is maintaining $350 as support and now is a good time to accumulate more Ethereum.  Theta and Litecoin are worth watching, but Neutral ATM has not bought either.  We are looking out for more bearish chart patterns in stocks and Bitcoin.

Here is another chart of the DJIA with a diamond pattern which eventually should break down.  Here is the chart:

We have seen the euphoria in stocks since election night but that is not sustainable and is just noise right now.  All we can do is sit back and wait for everything to play out.  We see more accumulation closer to $12K, which is music to many Bitcoiners ears because they get to accumulate cheaper.  Neutral ATM is here to get everyone off of zero Bitcoin.