Bitcoin has more than doubled in 2021 so far.  We are still in the first quarter.  Therefore, it has been a great year up to this point.  However, March has never been a good month for Bitcoin.  It has always struggled in September and March even in bull market years like this year is.  Last September Bitcoin went (-8%) for the month.  It’s looking better than that in March 2021.  Bitcoin is up over 15% as of today for March.  However, the ascending triange Bitcoin is in could just as easily dump into the high $40’s as it could pump above $60K the end of this month.  So, the pattern was up early this month and pretty much sideways for 2 weeks since the 8th.  What appears likely is that Bitcoin will keep floundering and may dump a little in late March but really break out close to April Fool’s day, April 1st.  See this chart below.  Remember, October 2020 was a huge breakout month for Bitcoin after a lousy September.  See the chart below: 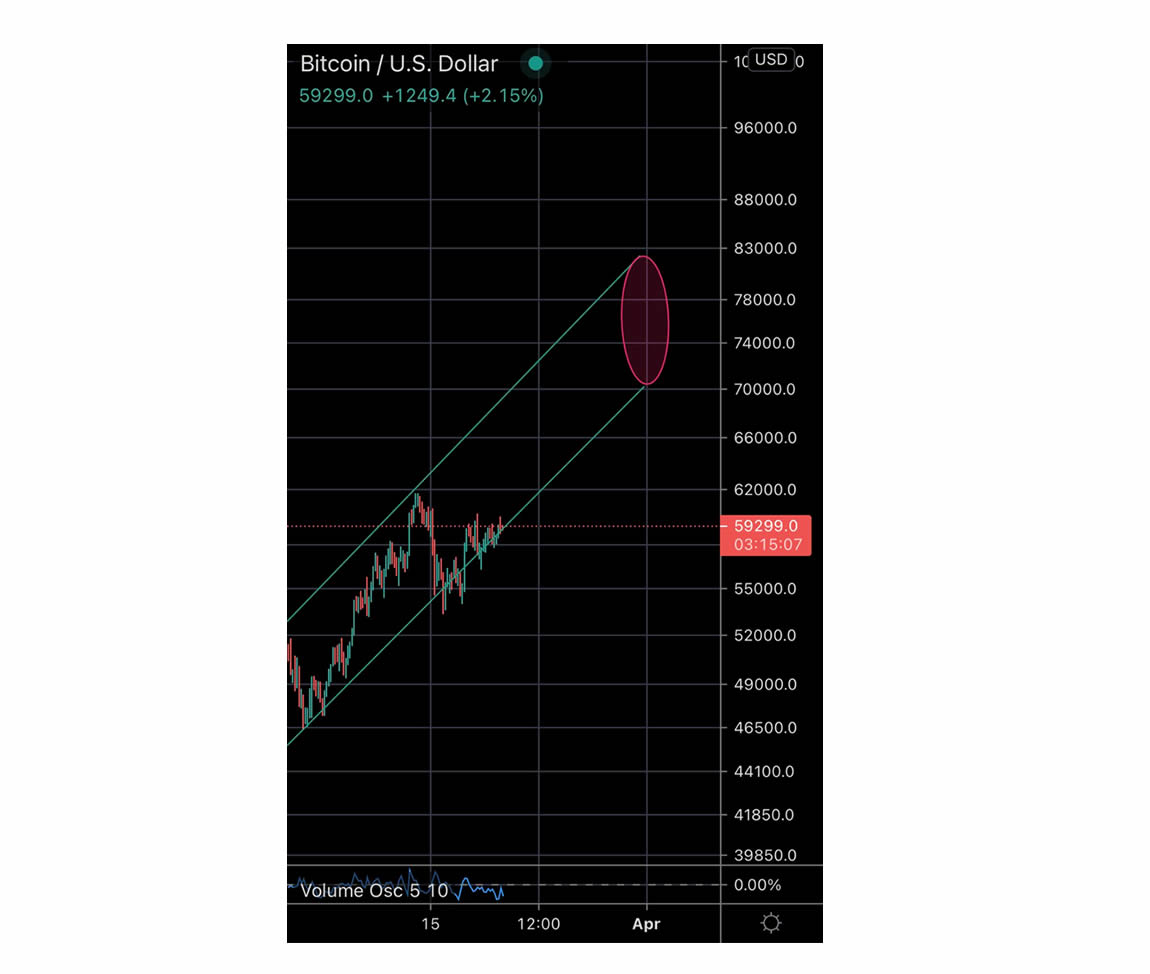 Technical analysis is difficult right now because ascending channels like Bitcoin is in, break down more often than up.  Bitcoin is down today, compared to last week.  So it seems Bitcoin could surprise and drop back into the $40’s again later this month.  Hard to tell right now.  It may just bounce up, and down, and go sideways for 10 days.  However, the month of April looks primed for price to bounceback, like it did in October.  Bitcoin is made of math and energy.  Not public narratives, and popular opinion.  Bitcoin will re-accumulate and look dead asleep, then breakout big!  It has repeated this in every bull run.  The timing is not here yet for this bull run to be over.  May 11th which was the last Bitcoin halving was only 10.5 months ago.  Bull runs last at least 18 months historically.  This one could be shorter than previous bull runs.  We still see August, September as the likely time frame, but it could stretch out through the end of 2021.  Public narratives about Bitcoin are always wrong, consistently.  We predict Bloomberg and Rueters will write negative FUD about Bitcoin claiming the bull run is over, and then boom!  It pumps big!  Don’t believe us, here are examples of 100% media capitulation, not to mention wall street capitulation regarding Bitcoin from past years: 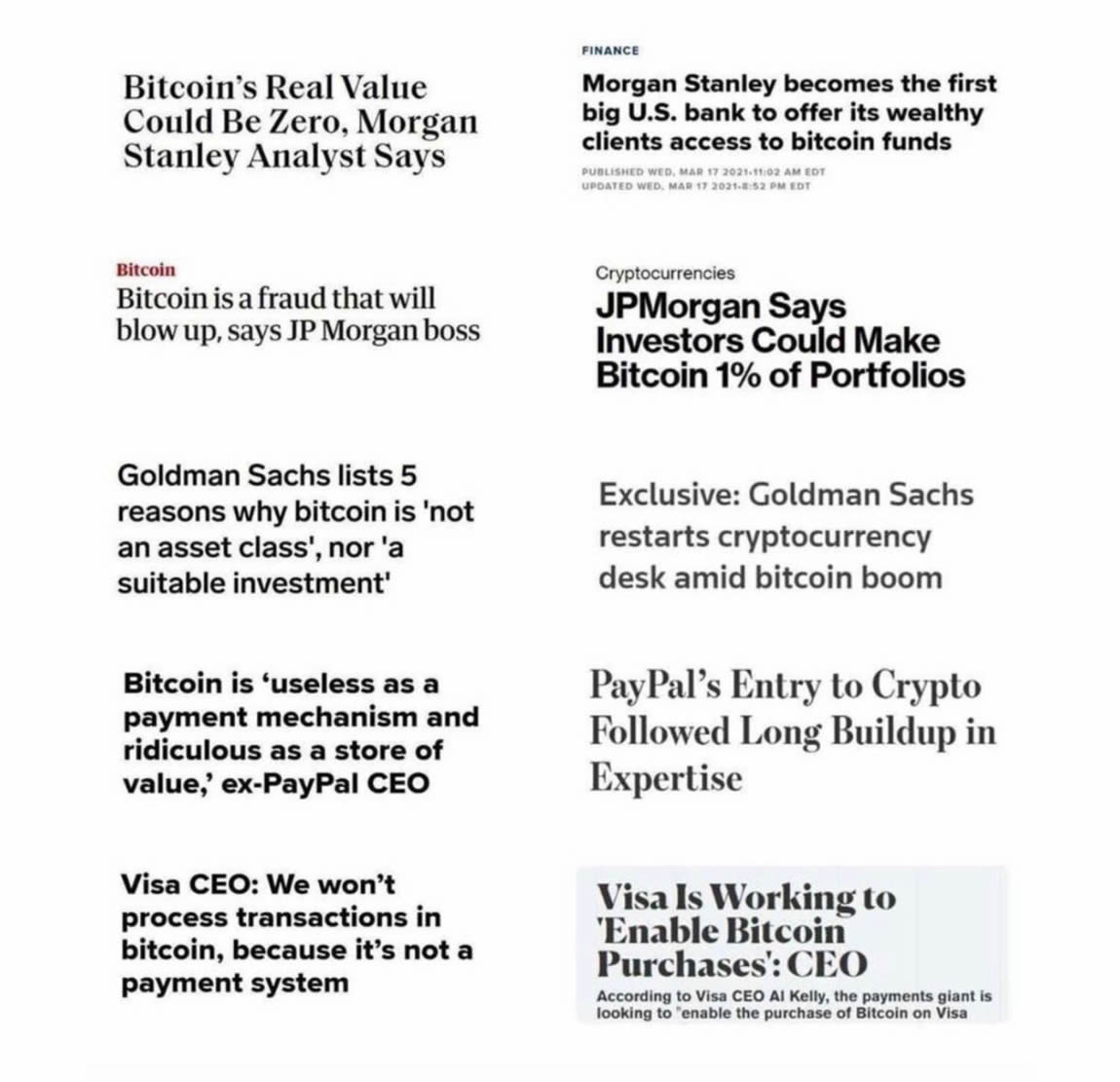 In addition to the media spectacle about Bitcoin over the years.  One can also look to the spectacle of fiat currency for reason why Bitcoin adoption is just beginning.  The Turkish Lira has collapsed and still dropping fast today.  It is an ugly situation in Turkey.  However, Bitcoin adoption in Turkey is at all time highs, click here to read article.

Where else have we seen this the last 5 years?  Lebanon, Argentina, Venezuela, the entire continent of Africa, Iran, Malta.  The US is behind these other countries because of its global reserve currency status.  However, the money printing is severe and it has been for a year with no signs of stoping since Biden took office in January.  There are signs which we keep pointing out that the stability of the USD is showing cracks.  We cannot pinpoint timing of when the dollar will fall off a cliff.  But it appears inevitable, and the run up to this cliff is speeding up now.  Bitcoin has been, and will continue to be the best hedge against inflation in the world.  Buy Bitcoin and opt out of the fiat currency system long term.  This month may be a dulldrum, but get in now before the April rocket ship takes off!