It’s A Free Country, I Can Change My Mind

In yesterday’s blog we mentioned the following:

“Therefore, we have mentioned in our blogs, laddering out of Bitcoin for a while as it approaches the blow off top later this year or early 2022.  Our target remains $160K to $220K, as the range for the top where Bitcoin may reverse and drop off steeply.  We will discuss that more in future months.”

We struggle with this because the monetary system has been so broken for so long that we ask, for what asset will we sell Bitcoin to buy?  Any hard asset, worth owning must be a better store of value than Bitcoin.  Real Estate may be in some cases, but apart from that?  There is not much we would rather own.  Even with the volatility.  So let’s go back to a more fundamental question.

What is money, really?  It is a belief system that the money you save will grow in value.  Thus, it is a store of value.  It has to be fungible, it has to be a medium of exchange, it has to be divisible, portable, and acceptable.  When compared to fiat currency now, Bitcoin exceeds fiat in most catagories, especially store of value.  Store of value is where all fiat currencies fail.  They all lose value over time.  They lack scarcity, which Bitcoin has.  All fiat currencies are tied to central banks, which will simply print more, stimulate the economy more, and find new ways to calculate inflation, or measure money supply.  Decentralizing your money, away from central banks, is the theme of Bitcoin.  Bitcoin is more portable, and divisible than fiat as well.  $billions in Bitcoin fit into an offline wallet, smaller than a credit card.  There are 100 million satoshis in 1 Bitcoin.  There are only 100 pennies in 1 dollar.  Medium of exchange is where Bitcoin is not as good as fiat currency.  The banking system may never let Bitcoin replace some form of currency (digital currency).  However, even digital currency cannot compete with Bitcoins store of value aspects.  We showed the ROI chart yesterday, and Bitcoin blows away any asset, and especially any currency, in the store of value category. This is where Bitcoin is supreme.  So if its value keeps growing the next decade as it did the last, or close to what it did.  It stands to reason, that owning Bitcoin is too valuable to sell.  We would advocate exchanging Bitcoin for Real Estate in some cases, maybe Art, a Classic Car.  Anything that is scarce and appreciates at a high rate.  It is also important to note, the opportunities to store Bitcoin with companies that loan money using Bitcoin as collateral.  It may be better to store Bitcoin as collateral than sell it at all.  We will continue looking into this and advise, we know 8% interest is paid on Bitcoin, held as collateral.  Neutral ATM understands that Bitcoin my drop from $220K down to $40K in the next bear market in 2022.  We also know, if you hang on to your Bitcoin until say 2060.  What will it be worth then?  It could be $10million per coin, who knows.  The digital scarcity combined with the difficulty adjustment will keep Bitcoin alive indefinently.  This invention is not going away.  It is too important.  Bitcoin is being considered by Twitter, and even General Motors, to be added to their balance sheets.  Mastercard announced they are adding Bitcoin as a payment currency for their credit cards.  BNY Melon announced they will hold, transfer, and issue Bitcoin for their clients, as well as other cryptocurrencies.  Here is a look at Twitter’s stock when they announced they were considering adding Bitcoin to their balance sheet: 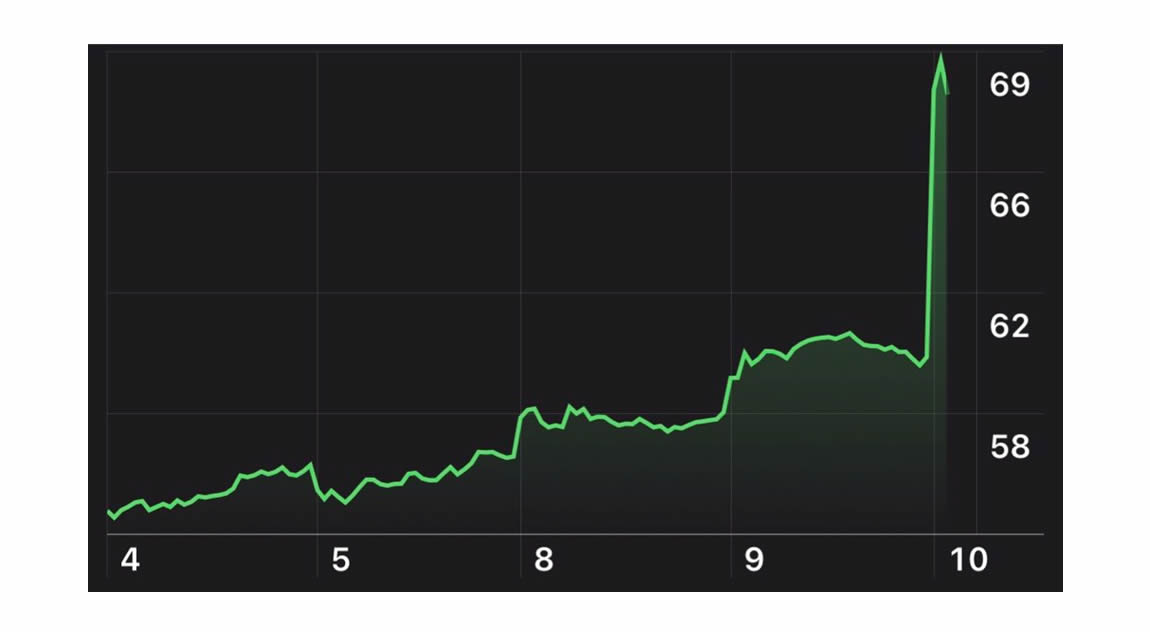 We need more announcements from corporations, municipalities and pension funds.  This will come in time.  But the long term decade plus horizon for Bitcoin, is too valuable to sell now.  We need to take the time to look into storing it with our private keys in our possession, and getting interest for it.  Exchanging it for Real Estate makes sense, but not much else.  Some people value cars, or other things that much, but few assets are worth selling Bitcoin for and that is the point today.