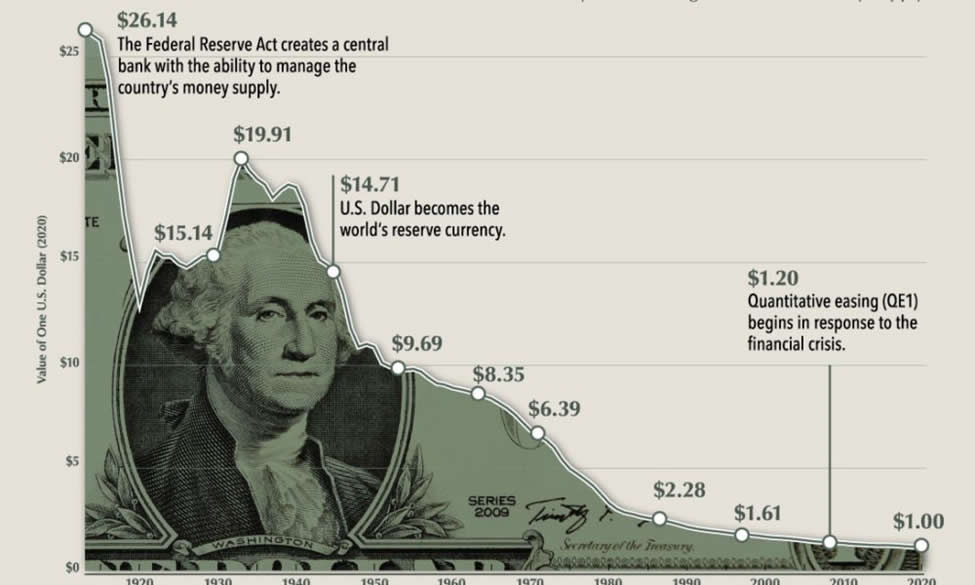 CPI inflation is being talked about a lot more now, than in the past, yet it has always been here: 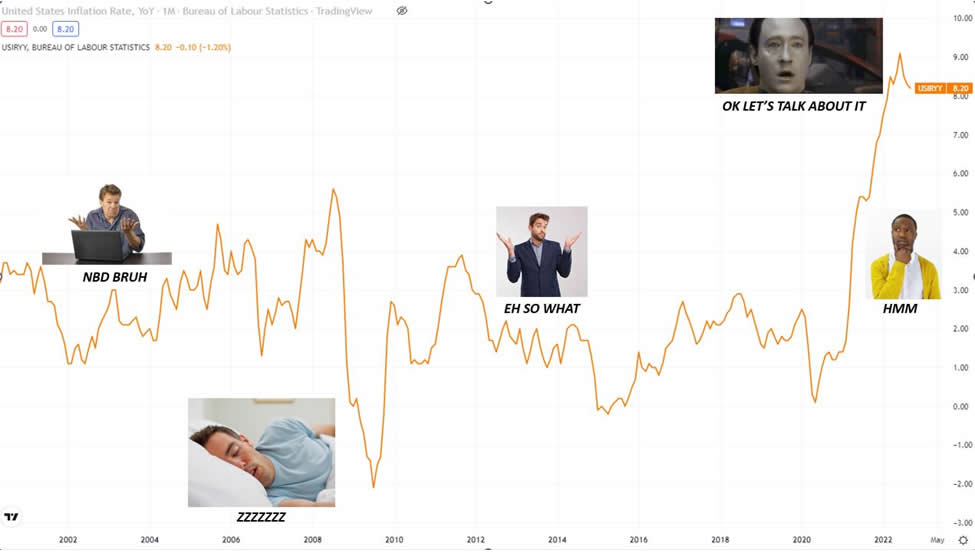 As this inflation rate climbs, and remember real inflation is 18% to 21%, depending on your geography in the US.  As this rate climbs, it forces the Fed to raise the Fed Funds Rate.  That is the rate the Fed pays back its debt at.  So as old debt is retired at old FFR rates, like 0.75% in January 2021.  It is replaced with debt at the new FFR rate of 4.0%.  That extrapolates out to $1.4 trillion per year in debt payments from the US Government.  That is 29% of the total federal budget!  Unsustainable, as this chart shows below: 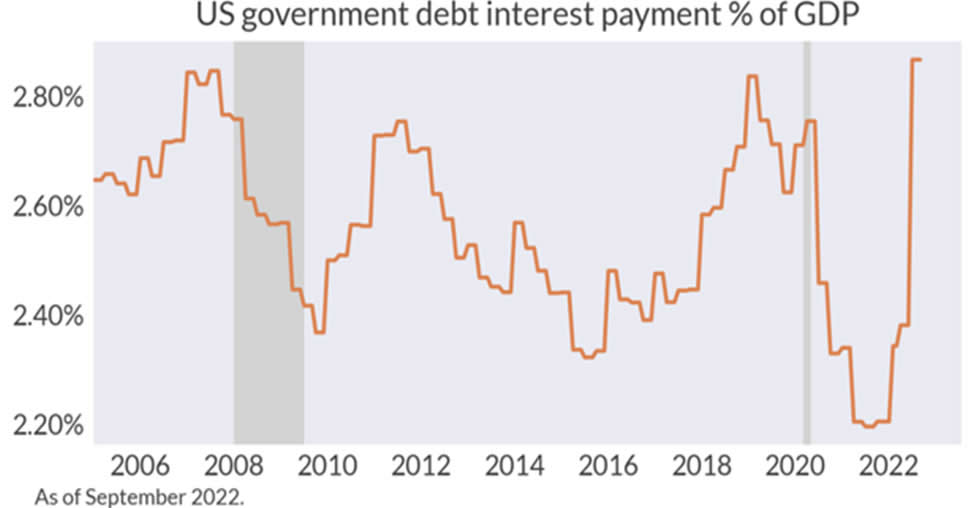 The greyed out vertical lines are recessions.  Looks like the debt interest payment has peaked, it should begin to drop.  In order to make that happen, the Fed would have to stop raising rates and re-institute QE (quantitative easing).  Expect this early next year, maybe by December.  The other possibility is an organized destruction of the monetary system, and an attempt to come out with a new one in that same time frame.  If that were to be the case there would never even be a Fed Pivot.  FFR rates would continue higher until the markets implode!  That is a possibility.  It’s not like the Fed is telling us what they are really thinking and what they’re orders are.  As we say on every blog.  Watch out for CBDC’s (central bank digital currency).  That is a trojan horse to give central banks absolute control over buying behavior and all online behavior.  This is because CBDC ties access to your funds, to your online behavior, and buying behavior.  CBDC can be cut off if you don’t toe the line brought to you buy central banks, and the media, which they ultimately control!   One wrong tweet or post, buy too much gas, ammo, whatever else they deem is bad.  Then you cannot access your CBDC.  Your cut off.  Financial slavery!

Here is more proof of the media control we are dealing with today.  We are told this morning, the jobs report in the chart below, US non farm payrolls is up 263K jobs!  Great right?  Below is the establishment graph of non farm payroll jobs: 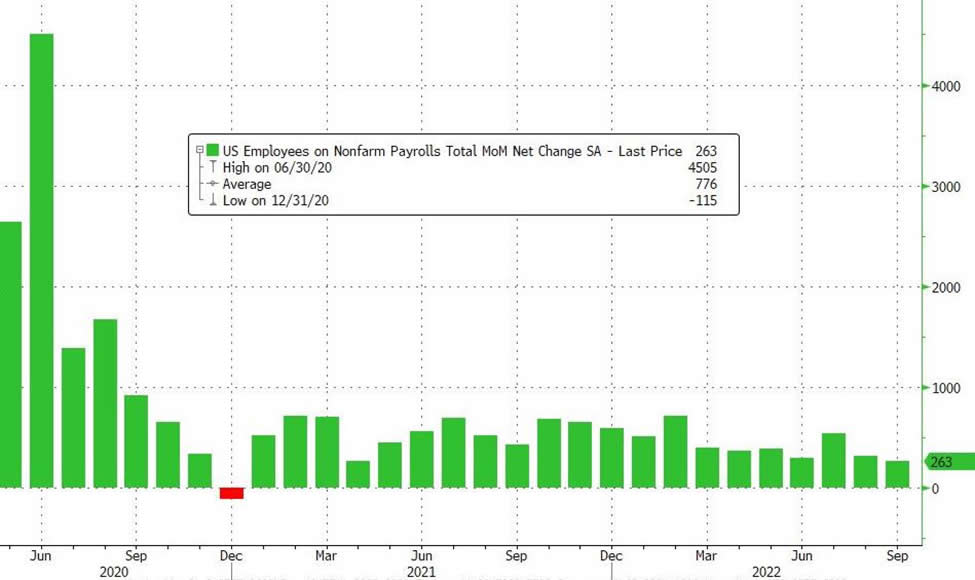 What’s not so great is the fact that the household graph shows a loss of -328K jobs this month.  Household takes in to account full time jobs, and part time hourly jobs.  Many of the lost jobs are full time, while the gain in jobs as a replacement, are part time (much lower paying jobs).  So establishment job graphs are published in media, while household job graphs are not!  Below is the unpublished household job graph:

Since March of 2022, the differential between establishment job graphs vs household job graphs is 2.3 million jobs:

Here is a zero hedge article in full detail, click here to view.

This next advertisement from 1955 details the problems we experience right now.  A new house in Florida for $7,900.  A mortgage of $49.74 per month.  Houses in Florida now average $420,000, in 2022.  Buying power is eroding, and media is giving us CPI inflation statistics of 8.2%.  Yet real inflation is 18% to 21%!  Not to mention this 2.3 million job differential between household jobs calculations and graphs, versus establishment jobs calculations and graphs.  Here is the 1955 home advertisement below: 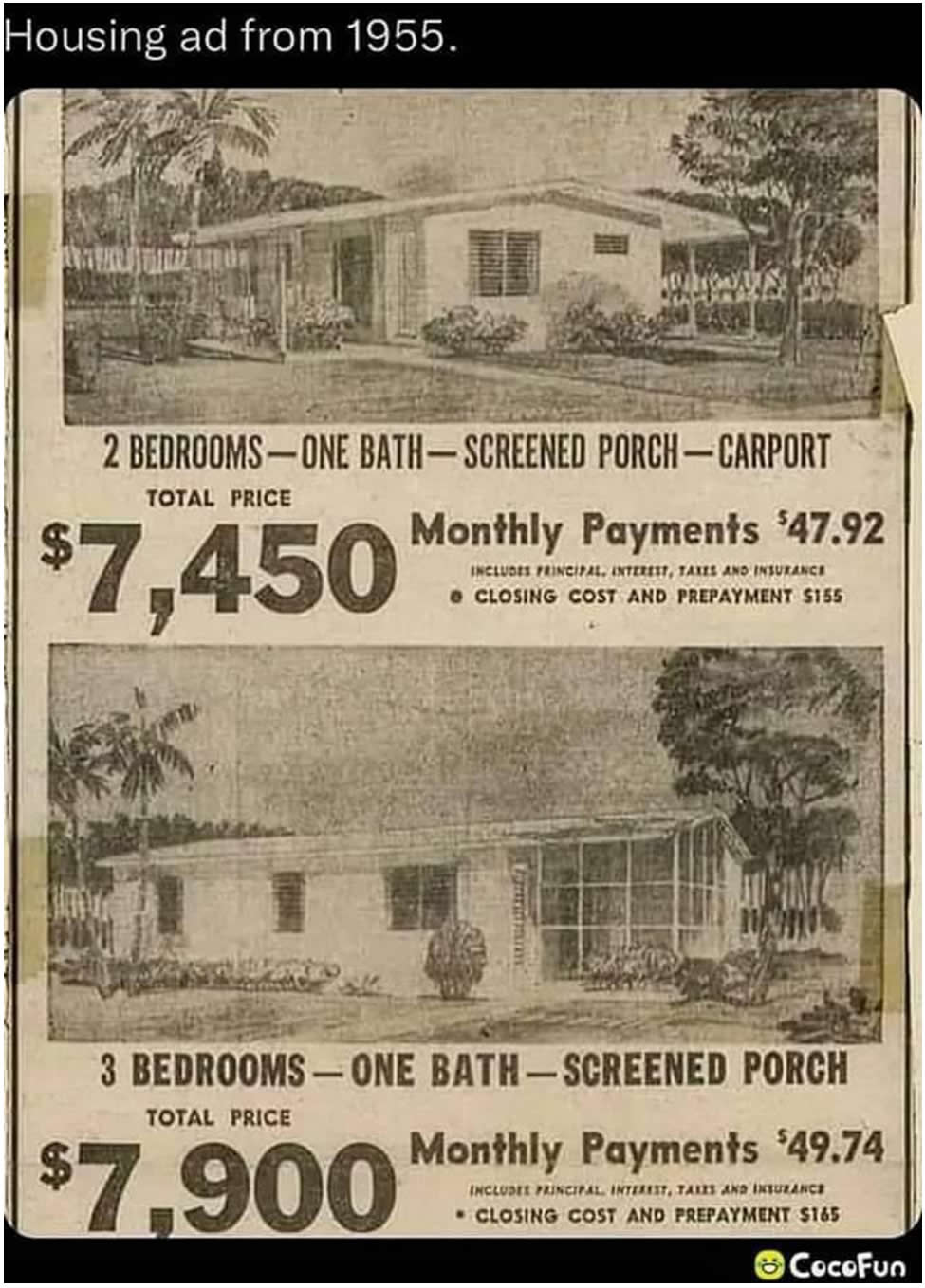 The monetary system is broken.  It is unsustainable, and long term there is no fix for it.  A non central bank system is the only answer.

This article provides an update on where the BRICS alliance stands with their reserve currency proposal and status, click here to read.

Bitcoin simply fits in to this as the decentralized international settlements digital currency.  Since Bitcoin is the ONLY decentralized digital currency it is the ONLY one able to handle cross border payments or international settlements.  China and Russia are also Bitcoin whales, as well as Gold whales!  More news about the BRICS reserve currency status, is that Saudi Arabia, Algeria, and Pakistan, are all asking for permission to join BRICS.

Fan Yifei, Deputy Governor of the People’s Bank of China responsible for CBDC is fired, and taken in to custody.  The reasons behind the investigation are unclear, but several have speculated that it relates to the payment industry.

This is not financial advise, and we are not financial advisors.  We simply know and see the value of a decentralized digital monetary system that has no link to central banks, who have been controlling the money in the US since 1913.  There will be no peace until this system is ended permanently.  Bitcoin and precious metals (especially Silver), are the best ways to hedge this inflation, and protect assets against what is to come.  Plans are in place to replace the Dollar.  If the US changes it’s stance on these issues which is very likely to happen.  Then, there can be peace and economic prosperity in this time.  Otherwise, there cannot be.  Bitcoin is a matter of humanity, not just financial returns.  The fiat monetary system is dying, what is the replacement, and will it be good or evil?  That is the question.  Which one will prevail?  We don’t have that answer right now.  It is obvious which side we are on!