To see everything going on right now and still have enthusiasm for Bitcoin, one has to cut out a lot of noise.  Altcoins are popping one by one, and Bitcoin is consolidating for over 80 days now.  There have been three peaks over $60K, but generally, Bitcoin’s range has been $54K to $59K this last month.  Last week we showed the $250Billion in realized capitalization that has flowed into Bitcoin lately.  In the below chart there is demonstrated three phases in each bull run.  We are in the cool off period after the first phase.  If Bitcoin keeps running sideways, as we think it will into June.  That would give ETH and other Altcoins a chance to make large gains while at the same time, continuing to increase realized capitalization into Bitcoin.  If Bitcoin is the king of crypto as we always say it is, the Altcoins will fall off making room for Bitcoin to begin Phase 2.  See the chart below: 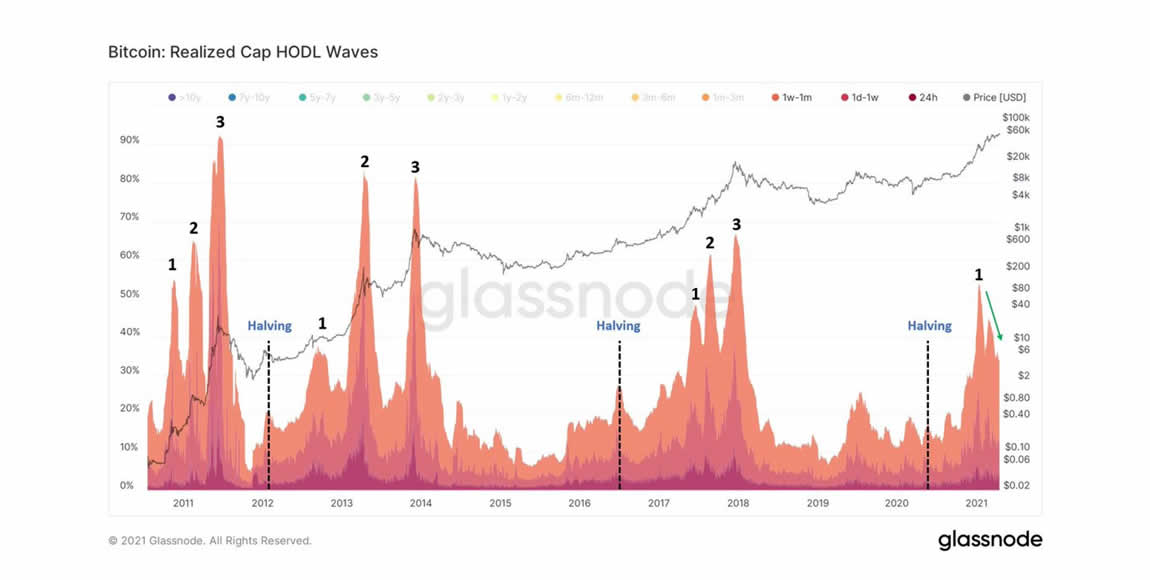 This next chart is more zoomed out.  Clearly, the bull runs last longer than the bear markets in red below.  The halvings kick everything off, and are the yellow vertical lines below.  Based on this chart, and many others we analyze, Bitcoin’s bull run should have close to or over 6 months to go.  It is a little over halfway through it.  This chart compares all previous bull runs, and if the phase 2 of this bull run is massive, and the cool off period is very long, which it has been so far.  This bull run may end up looking more like the 2013 – 2014 bull run.  That would leave us with a peak at exponentially higher levels than our prediction of $160K to $220K.  See the chart: 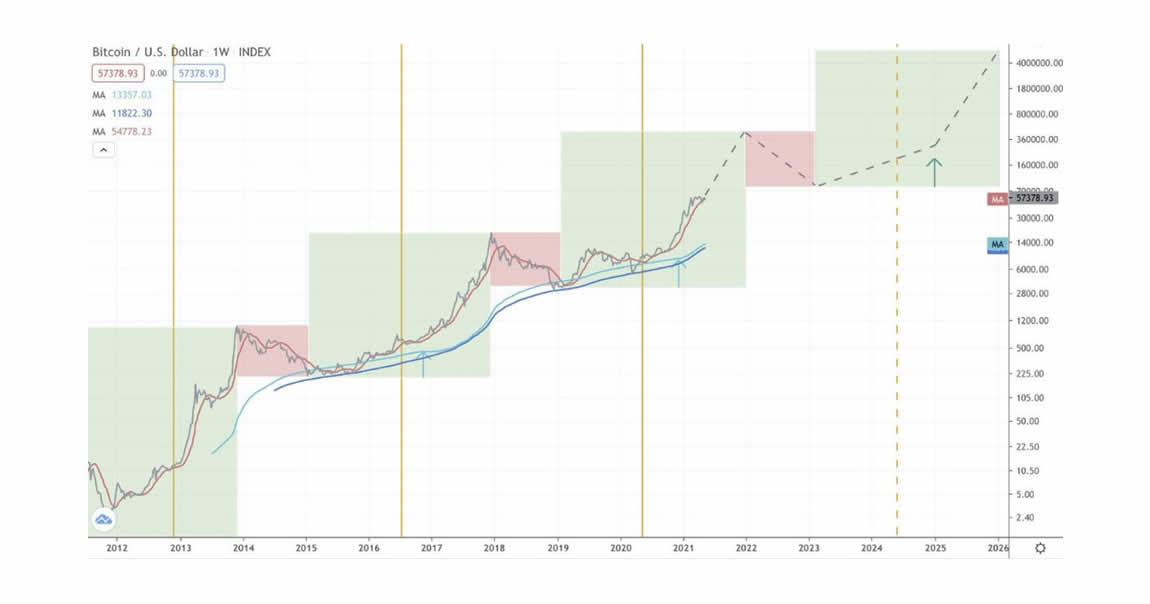 Another reason why this bull run looks more like 2013, 2014, is the supply held by addresses with a balance of 100 – 1K Bitcoin.  Supply held by addresses, basically means demand.  See the similarities inside each green box on the chart.  So far the 2021 version does not look as parabolic as the 7 year predesecor, but they are similar.  If this keeps playing out look for prices over $400K to even $500K late this year!  All we can do now, is blockout the altcoin noise.  The FUD noise, even the possibility of something happening with the three gorges dam in China.  Money supply is parabolic, more stimulus is going through congress and the senate.  Inflation is here!  See the chart below for some perspective:

Despite the fear, unbelief, and doubt in the press at times.  Especially the pumping of altcoins right now, stealing Bitcoin’s thunder.  The fact that the US Dollar has lost most of it’s purchasing power since the private federal reserve was created during Woodrow Wilson’s presidency.  This has led to inflation, which has been masked by the Fed since the early 80’s.  Yet our dollar buys less and less each year.  The monetary system is in it’s final stage of life.  Bitcoin can take excess power, excess wind, sunlight, and natural gas to creat power for mining Bitcoin.  It is the hardest money ever created, the most scarcity, and the most decentralized money for the people.  Bitcoin was made to replace the dollar.  Someday, it will.  See the chart below on the US Dollar: 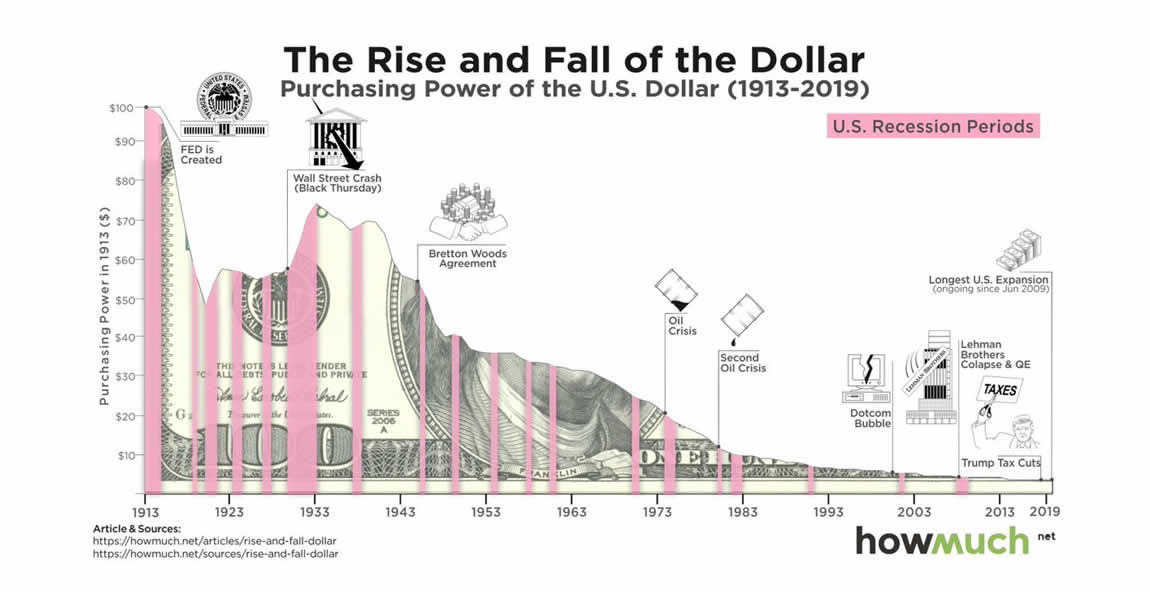 Notice in the above charts.  WWI and WWII were the periods when the dollar lost the most purchasing power.

The printing presses work overtime during wars.   A huge percentage of stimulus money for a crisis like a war, is wasted and does not end up where intended.  This kills a currencies purchasing power.  Loss of a currencies purchasing power is another tax on it’s citizens.  Bitcoin is the people’s money.  It is humanitarian, it lift’s up a families purchasing power instead of denegrading it like fiat currency does.  Decentralize from the central bank.  Buy the ONLY crypto currency that holds up on a stock to flow model like Gold and Silver.  Remember, the USD was backed up by Gold until 1971.  Since then, most Gold is hoarded by Central banks and out of circulation.  Yet the price can be manipulated with derivative contracts.  Bitcoin cannot be hoarded like that.  It has 130million investors.  Very few are central banks.  HODLers have been holding it for it’s store of value benefits and not selling.  Moreso, in this bull run than the previous ones.  Protect your savings, ignore the noise, HODL Bitcoin.