Global Macro Environment Has Ushered Bitcoin Into The Mainstream

We keep telling readers to ignore, as much as possible, price action.  The global macro environment is ripe for Bitcoin to succeed long term.  True blue Bitcoiners must be very patient people who have a high degree of control over emotional impulses!  This has not been more true than right now when Bitcoin is in the middle of a major bull run, though price action has been put to sleep since March/April, looking back in hindsight.  So, today we ignore discussions of price action and focus on long term global macro.  Obviously, the M2 and M1 money supply has gone off the charts literally, and is no longer even being tracked by the St. Louis Fed!  That alone is unbelievable!  What about the reverse repo market?  How does that play in to global macro and what could that do to markets in the future?  How would that effect Bitcoin?

Well, lets look at Bank liability.  Is that liability on the Fed side or the Commercial Banking side?  It is on the Fed.  It is a collateral issue.  The reverse repo market impacts bank collateral.  The Fed has to reposess Treasury bills and loan money to the commercial bank in under 24 hours.  Think of it as a short term loan from the Fed to the commercial bank.  How do they do that?  Money Market funds get T bills in exchange for higher yield accounts (money market funds) for their commercial banking customers.  Banks chase yield like institutional investors do.  They have to provide it to compete.  As bond yields are dropping: 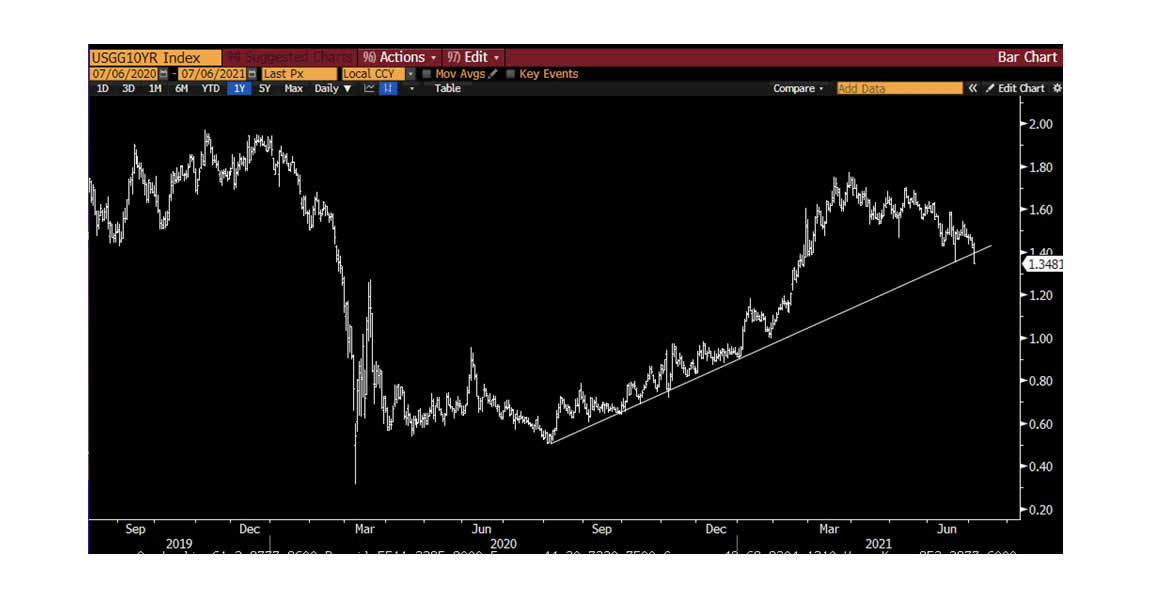 This suggests that the Fed’s QE program has reached its limit, and the money they are putting into the market from their bond purchases is just coming right back. This is mostly because banks don’t have anyone to lend it to.

The other problem is a lack of collateral. Basically, if financial institutions don’t have any bonds or treasuries, then they can’t do repo operations and are forced to deposit the money with the Fed. This means that the QE program might have reached its limit because they bought up almost all of the available bonds.

Think 2008 banking crisis!  If and when such an event does occur, how does the market react to inflation hedges like Gold and Bitcoin?  We already know institutional investors, retail investors, hedge funds, banks, credit card companies have all flocked into Bitcoin.  8 Bitcoin ETF’s are before the SEC chairmen awaiting approval.  Gary Gensler is a Bitcoiner, by the way.  He is now the SEC chairmen.  Another chart to look out for is the DXY.  It tracks the USD index:

If the DXY climbs too fast while bond yields are already falling.  A stock market crash is imminent!  Will money flow into Gold, Silver, and Bitcoin?  Well, in 2008 Gold skyrocketed.  Bitcoin came out on January 5, 2009.  In response to how poorly the Fed handled the 2008 great financial recession.  Bitcoin is a more trusted safehaven than Gold is now, hence the flow of money already investing in Bitcoin over the last 18 months.  Neutral ATM sees Bitcoin as the source of the next major flight to safety.  Gold and Silver will also benefit, but nothing like Bitcoin!  Here is something else to consider about Bitcoin:

Then you throw in nationstates and what they are doing.  El Salvador already voted Bitcoin as legal tender.  Mexico’s third wealthiest man Ricardo Salinas Pliego calls Bitcoin far superior to Gold as a store of value.  However, the central bank has disallowed him to make the push for a vote to legal tender status at this point.  Here are the other countries involved: