return to the blog
Rumors are flying about XRP and Dogecoin somehow replacing Bitcoin as the future money of choice, future global reserve currency.  Many Altcoins are popping right now, as Bitcoin trades sideways for two months.  Yet, here is what Bitcoin is doing right now: 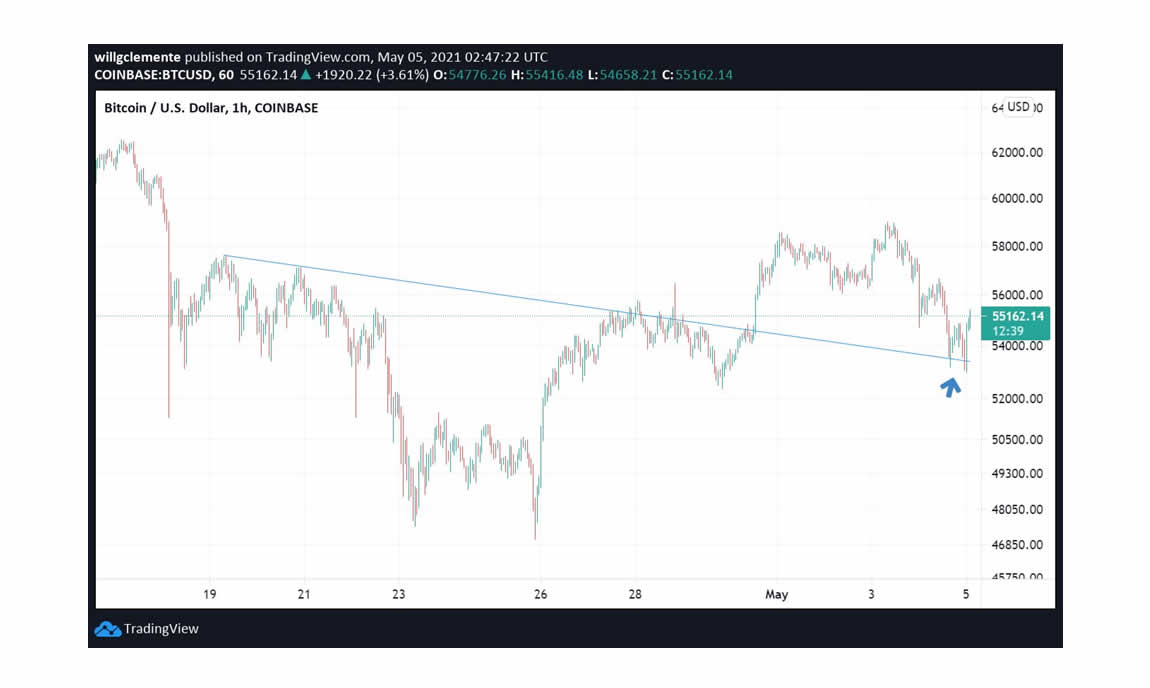 This frustrates me personally, to the point that we may sell the rest of our Ethereum.  Why?  Because none of the critics pay any attention to Bitcoin fundementals!
Why does the fact that only Bitcoin holds up on the decades old, stock to flow model, used for Gold, Precious Metals, Commodities, matter so much.  It helps prove Bitcoin is money.  Since Altcoins can change their supply whenever the founder wants to, they do not work on a stock to flow model which divides circulating supply by annual flow or supply.  Bitcoin actually programmatically cuts Bitcoin supply every 210,000 blocks (the halving).  The charts prove, that every 4 years, after every halving, Bitcoin goes on a massive bull run.  The network effect pulls a lot of the FOMO into Altcoins as well.  Yet the Altcoins dump 90% to 100%, while Bitcoin hangs in and climbs to new highs after every  halving.  Bitcoin is always higher highs and higher lows on a ten year chart.  Bitcoin actually hedges central banks.  It is provably decentralized.  That means no one individual controls the price.  Controls the majority of the coins.  All the Altcoins are controlled by a founder or a tiny number of whales.  Dogecoin has 83 individuals controlling 65% of the coins.  XRP may be a lot worse.  The founder owns over 51%.  Bitcoin has no owner or founder.  The first million coins mined, were never sold, and never will be.  Since January 2009.  Below is proof of how serious the US inflation problem is becoming, view on twitter.
The three stages of inflation are:
If the Altcoin is centralized, when it gets to an acceptable profit level, the handful of whales will sell and dump the price.  This dump is much worse than Bitcoin, many Bitcoiners transferred into Alts and lost there Bitcoin stack that way.  They were “bagholders” for the Altcoin.
Neutral ATM warns not to get trapped.  Therefore, we are soon transferring our Ethereum into Bitcoin.  Plus, we really want to support the blockchain and support the Bitcoin community, environment!
The institutional investment into Bitcoin:
Banks, central banks, institutional investors, hedge fund managers, billionaires, 8 ETF’s coming online in the US.  All of this is causing massive quantities of Bitcoin to move off of exchanges and into cold, long term storage.  We have shown our readers dozens of charts proving Bitcoin, this cycle, is moving off of exchanges.  The more Bitcoin off of exchanges and into cold storage, means that much less Bitcoin in circulation.  This is always bullish, Bitcoin scarcity propels the entire crypto currency market!  Without the halving.  Crypto Currency fails, not just Bitcoin!  People don’t understand that!
In the below chart, we look back at the 2017 bull run.  2 pull backs below the 7 day moving average (blue line), and then, lift off: 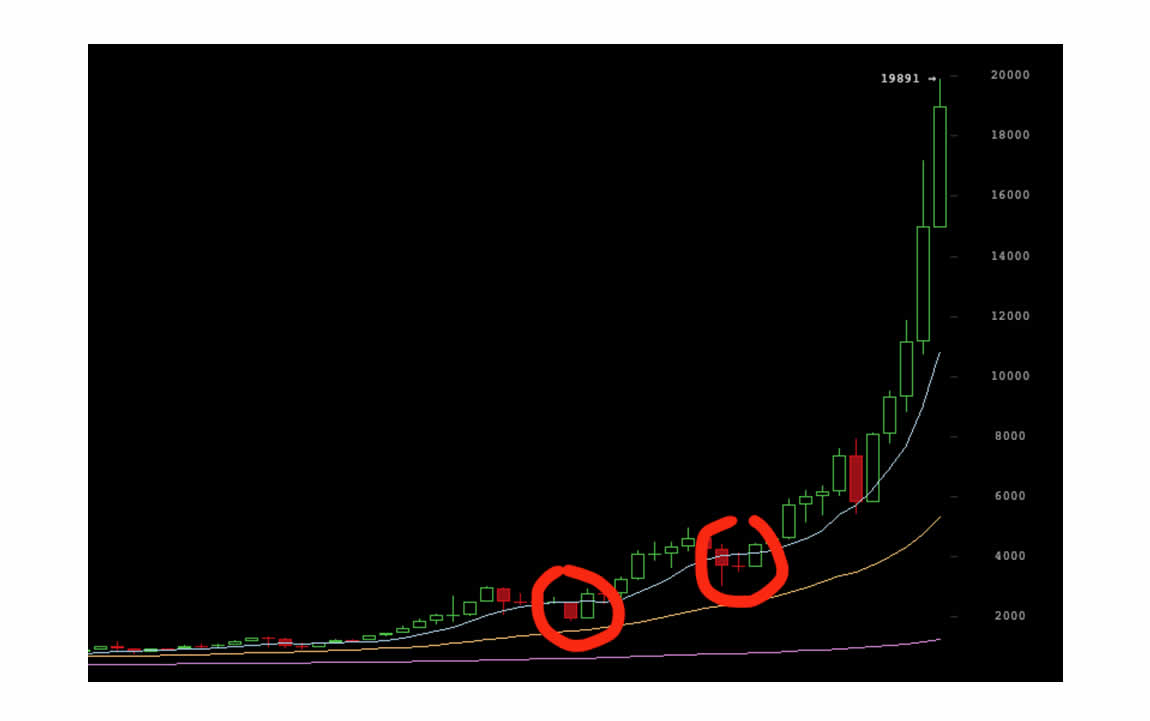 For the 2021 bull run, we just dipped below the 7 day moving average in this recent dip.  It lasted two weekly candles.  We are not far off from lift off:

Neutral ATM sees June, but it could be late May timeframe.  Or it could drag until July, but we really doubt that.  Timing does’nt matter.  Price (short term) does’nt matter.  The Blockchain can survive everything the world hits it with.  For example:
The five gorges dam in China is in trouble.  It has been all year.  Rains have continued and flooding there is a real, real problem.  If that dam fails, thousands of Bitcoin miners and millions of people will be in harms way.  We don’t want to diminish the human catastrophe.  However, if that dam fails, Bitcoin mines will go down in large numbers.  The hashrate would go down 40% to 50%.  Yet, every two weeks Bitcoin has a difficulty adjustment.  It would be reduced, and within 4 to 8 weeks the Bitcoin price would recover.  If the US introduces heavy regulation on Bitcoin, which is likely.  The same thing would occur through the difficulty adjustments.  That would only be a factor if the hashrate is dropped by heavy regulation on Bitcoin mining.  Not to mention, in the 5 countries that previously attempted heavy regulation on Bitcoin including banning it.  All of them (China, India, Vietnam, Iran, Korea) have experienced spikes in demand for Bitcoin.  Iran is now putting it on their central bank balance sheet.  Bitcoin creates it’s own feedback loop, Metcalf’s law, the network effect.  The halving kicks it all off.  The blockchain is more secure than nuclear launch codes from the Pentegon.  As inflation gets worse in Europe and the US, Canada, Australia, New Zealand, etc.  Bitcoin’s network effect will get more and more attractive to investors looking for a place to park their money, outside of central bank control.  It may be trading sideways now, but fundementals will prevail in the end.  Bitcoin fundamentals matter, and that is why we write this blog.
Neutral ATM buys and sells Bitcoin as little as $20 at a time!  You do NOT have to buy an entire Bitcoin.  Our OTC Desk is coming online soon, low rates, buy or sell online 24/7/365.  Neutral ATM is here to get everyone off of zero Bitcoin.
Give Neutral ATM a try.  We have low rates, convenient locations and we are expanding. Contact Neutral ATM, we will answer all your questions about Bitcoin and using our ATM machines. Find a Neutral ATM Bitcoin machine location near you.