Debt is King! Got Bitcoin?

Debt is King!  Got Bitcoin?:

These next five slides are from George Gammon.
This debt is off balance sheet because it is for derivatives between foreign and US banks, swapping currency for USD, in order to buy raw materials for manufacturing/distribution.  In the slide below George shows a chart, the green line is $ amount of derivatives.
The red line is the total % of derivatives that mature in one year or less!:

FX swaps are off balance sheet, $85 trillion is USD debt, the rest is foreign debt, and most importantly, it is all due within one year!:

This amount of debt equals the 2008 great financial crisis times 1000+!  Next year, there will be a financial implosion that history has no reference to compare with!  Unless this delays into 2024.  How could it actually delay that long.  We don’t see it holding out like that.  The 2008 GFC was $1.5 trillion, this is over $100 trillion in debt to be unwound!

If the derivatives mature and come due in 2023, lets say fall 2023.  Interest rates are way up, the debt service cost is way up.  These companies that caused the banks to perform FX swaps, will not be able to pay these debts, they will default.  If derivatives default, banks default.  There will be bailouts but remember, this totals over $100 trillion!:

This is why the world has gone upside down since 2020!  Yet, as we always say.  Bitcoin is the life boat.  Yes, there is Gold and Silver, those will do well when this hits the fan!  Bitcoin will go insane, off the charts.  The miner reward is 6.25 BTC per block.  In about March 2024, the miner reward drops to 3.125 BTC per block.  That means each miner receives 3.125 Bitcoin when their block is accepted on the blockchain.  Bitcoin is already more scarce an asset than Gold.  What happens when the halving hits in early 2024, and Bitcoin is twice as scarce?

Think about that for a while.  Remember to keep your coins offline.  Do NOT leave them on any exchange.  We recommend Trezor or Coldcard for offline wallets.  We use Trezor.  Unchained Capital is great for IRA’s in Bitcoin.  That is who we use.  Keep it off line, keep it decentralized, out of reach of central banks and governments.  This is going to get ugly next year at some point!  Governments have no control over wallets.  Here is Marty Bent on Fox news during the Canadian Trucker Rally, last February, when the Canadian government tried to sieze truckers Bitcoin.  Did not work if they held it OFFLINE!:

Below was Nunchuck’s (Bitcoin Wallet) response to the Ontario Superior Court of Justice.  Hilarious!: 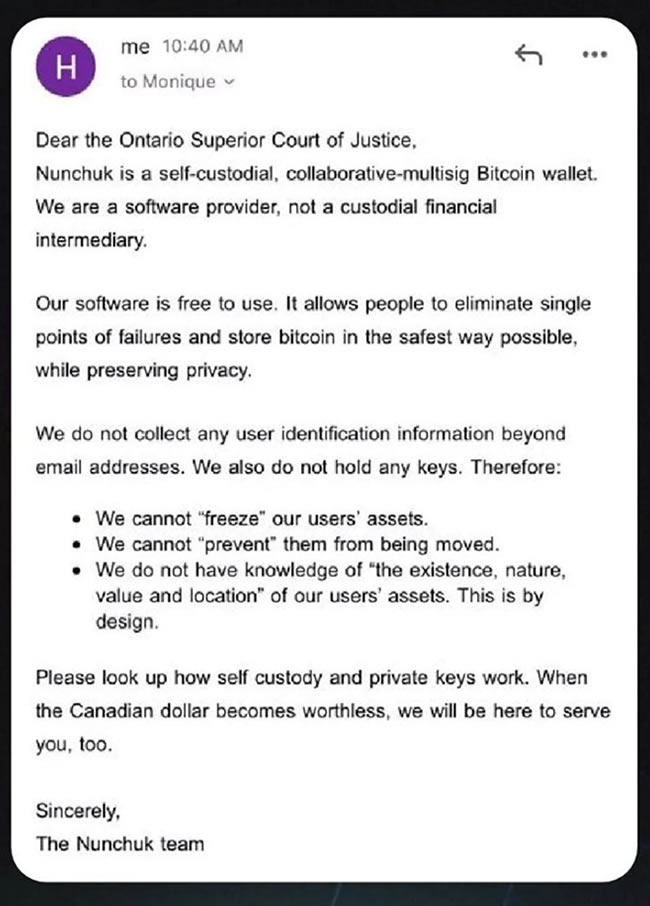