The US dollar is the global reserve currency.  It is the largest currency in the world.  Yet, in a chart we have shown a lot, we can easily prove, the US dollar has lost most of it’s value since being created in 1913, as the Federal reserve note.  It is an instrument of debt, it’s not really even money.  Only because the Federal reserve was created, is the USD truly considered money.  The Federal reserve is private.  Owned by prime brokers, as are all central banks.  The central bank families have money not even recorded as theirs.  They are far more wealthy than Elon Musk, the richest man in the world.  Yet their wealth has remained hidden, and unrecorded.  They control a lot!

However, before we get into the loss of buying power the US dollar has suffered.  Let’s look at this video from twitter of the FDIC systemic resolution advisory committee.  This recent meeting was recorded.  Here they are discussing not revealing to the public the true state of affairs at the FDIC.  They have $125 billion in total assets yet they insure over $9 trillion in bank deposits.  The FDIC is broke!  IF there was a bank run in 2023, which we would not be surprised by, major banks like JP Morgan Chase would “Bail In”.  That means depositors money would be the means by which they settled their lack of liquidity.  As rates climb all this last year, the US government is now paying almost $1 trillion per month for debt service.  Over one third of the federal budget.  Yet inflation is still much higher than the Federal Funds Rate which is 4.8%.  Thus, the Fed has to keep raising rates into a recession.  These facts plus this global sovereign debt crisis that is looming over the recession that has already begun.  These are the reasons the FDIC is concerned and worried about what to tell the public, click here to read.

The fact that the FDIC’s insurance obligations are 72 times greater than their assets, is mostly why they are so worried about this.  As this video above shows.   The US dollar is worth 3%, at the most, as compared to what it was worth (in buying power terms), in 1913.  That is the year the Federal Reserve was established.  See this chart below: 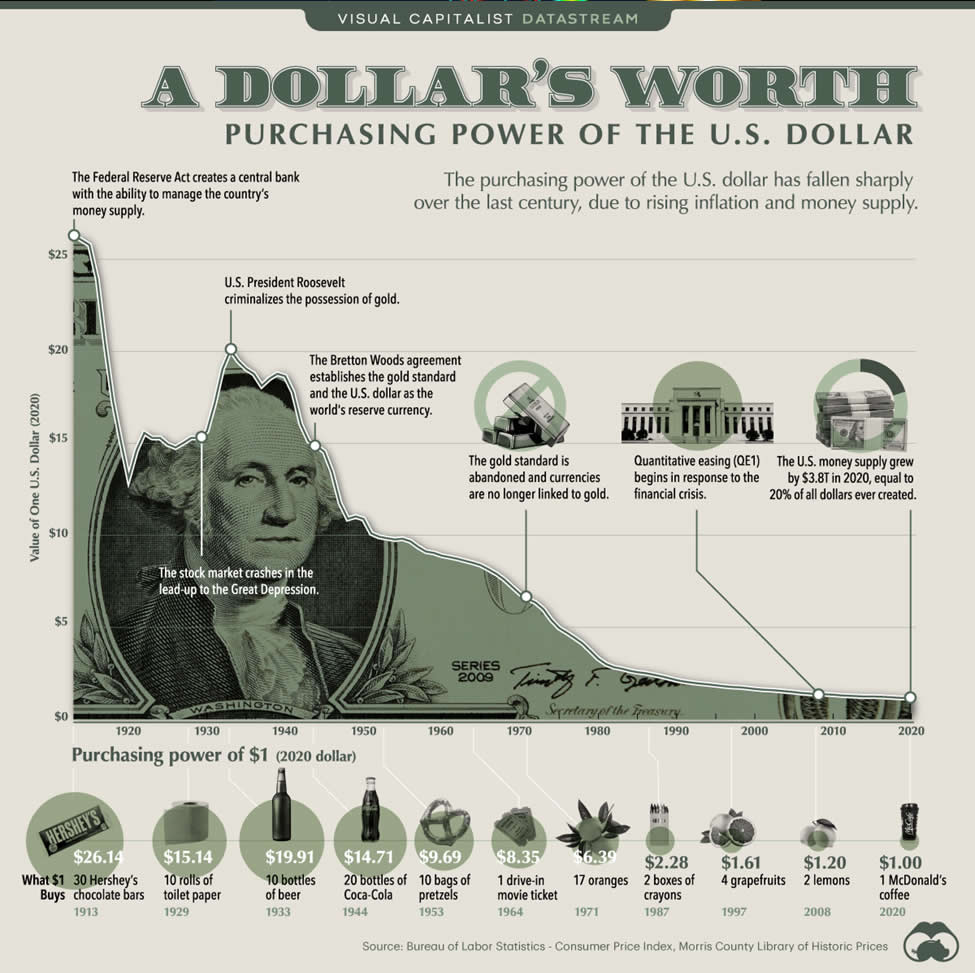 Then look at the value of the USD price in Bitcoin.  This next chart shows the loss the USD would suffer if priced in Bitcoin.  The reverse is true if USD were exchanged for Bitcoin when it came out in 2009.  Bitcoin eliminates the effects of inflation over years of time.  Yes, there are bear markets every 4 years.  2022 was one of them.  However, since 2009 Bitcoin has eclipsed real inflation on average by 10X!  Here is the chart of USD priced in Bitcoin: 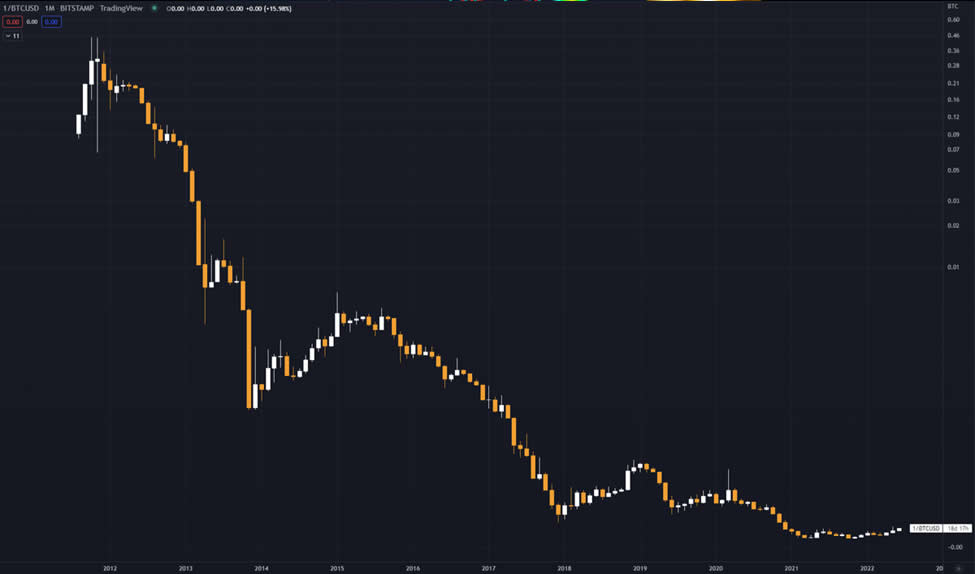 Remember, as we announced in this blog, click to read.

El Salvador Bitcoin volcano bonds are rolling out.  BRICS reserve currency is soon coming, and Russia is openly discussing selling Oil and Natural Gas in Bitcoin.  Get the picture yet?  The USD will NO LONGER be a global reserve currency.  When?  We don’t know, but soon.  Bitcoin will be used for international settlements.  Traded for Oil and Natural Gas.  Compared to CBDC, this is a no brainer.  Bitcoin has climbed to just below $20K, from $16K a few days ago.  We do not expect a lower bottom, below what we have seen so far.  Bitcoin is recovering.  This recovery will take time and does require some patience.  We are not out of the woods yet, but there is hope for the future.  The world does not have to accept financial slavery, which is what CBDC is!  We are not financial advisors and this is not financial advise.  Bitcoin is coming!  Get ready!