Today, we will start with a video from 1967!  Buckminster Fuller predicted back then, 54 years ago, that money would be made of energy and backed by energy.  Sound familiar?  He mentioned the year 2018.  Bitcoin recovered from a bad bear market late that year.  The bear markets are where Bitcoin proves its resiliency, click here to view.

The more we observe about the Fed policies going on right now, and for the past year plus.  The more it appears the USD is being driven off a cliff.  It started with the great financial collapse of 2008, and it is ending with the great reset of 2021.

However, Bitcoin is a solution to the problem.  We have to do more than just point to a large problem trapping billions of people into the malais.  We must offer up a sensible solution that stands the test of time, bear markets, bull markets, choppy sideways markets.  A technology based on math and energy, like Buckminster Fuller mentioned in the attached video 54 years ago.  Many companies and individuals (Jim Cramer of CNBC most recently) are demanding to be paid or to pay employees in Bitcoin.  Why?  Because the money is sound.  You can trust it.  It appreciates.  As we have said before about the volatility.  Don’t look at the top branches of the tree blowing in the wind, study the root system!  Bitcoin starts each 4 year cycle with a bear market and ends the 4 year cycle with an amazing parabolic bull market.  It is rhythmic, it is predictable, the math is provable, the proof of work is energy.  Bitcoin makes sense, it is practical.  It encourages savings.

Below is a chart about Bitcoin being transferred from exchanges to Blockfi.  Their competitors are Celcius Network and Salt Lending.  Any of these companies can take Bitcoin, store it, and allow the owner to use it as collateral.  Borrow against it instead of sell it.  We have advocated this in the past and we may move forward and use our Bitcoin as collateral for large purchases so we don’t have to sell it.  Treat Bitcoin as prestine collateral, because it is.  It is getting scarcer and scarcer, much like land and fine art.  Our blogs teach investing in scarcity!  There is no other way to preserve wealth!  Here is the chart below with how much Bitcoin is transferring to Blockfi.  Salt Lending and Celcius Network have similar stories: 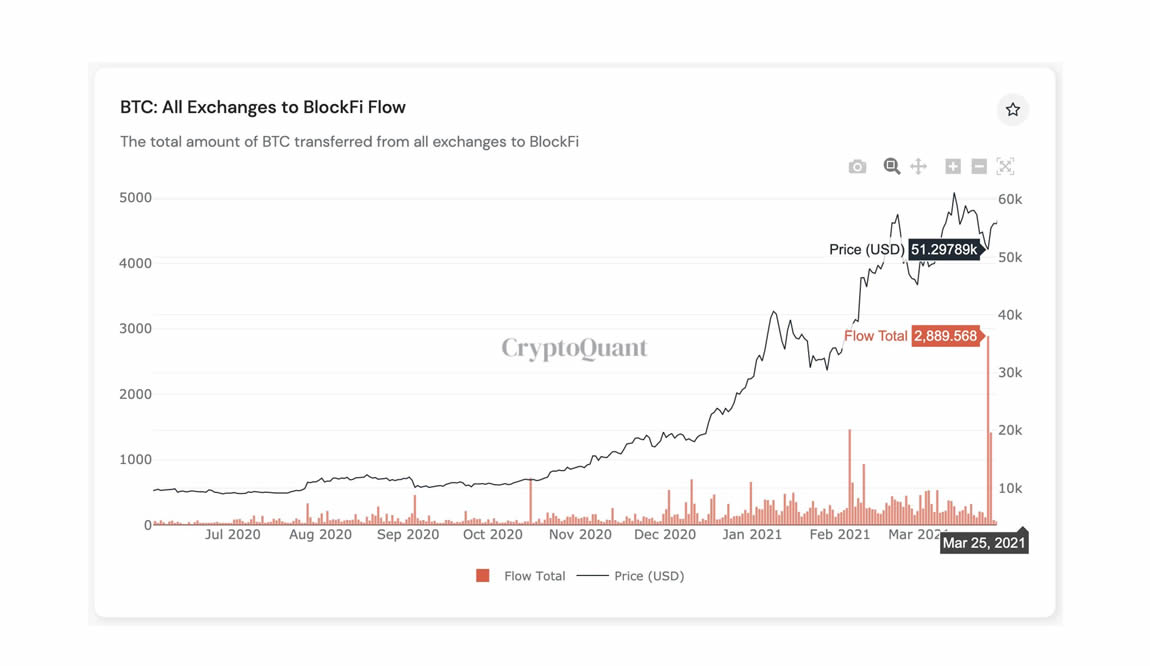 Remember, the blockchain adds a new block every 10 minutes or so.  These blocks are math equations on an algorithm.  The backing of the blocks is the energy required to produce the math equation.  Math and energy are what really back up Bitcoin.  That is why every block can be counted and we subsequently, always know the circulating supply of Bitcoin, 24/7/365.  Every 210,000 blocks on the blockchain, the miner reward is reduced by 50%.  This cannot be changed without a majority consensus vote.  Everyone that owns Bitcoin did it because of the scarcity and subsequent price appreciation that is brought to fruition, by scarcity.  They won’t vote to print Bitcoin like the central bank prints USD!  That will NEVER happen!  Therefore, use a currency backed by math and energy.  Store your wealth in it.  Use it as collateral and opt out of the corrupt fiat currency banking cabal we are stuck in right now.  Bitcoin is sustainable, fiat currency is not!

“You never change things by fighting the existing reality.  To change something, build a new model that makes the existing model obsolete”  Buckminster Fuller