Xingping Xi (Chinese President) is traveling to Riyadh, Saudi Arabia to meet with Mohammed Bin Salmon (Saudi Arabian Crown Prince) regarding this BRICS Reserve Currency which is rolling out.  They had 5 countries (Brazil, Russia, India, China, South Africa), and now 12 more countries are planning to join BRICS.  Here is a map.  This is over 50% of the global population, and over 60% of the global energy capacity!  Here is the map: 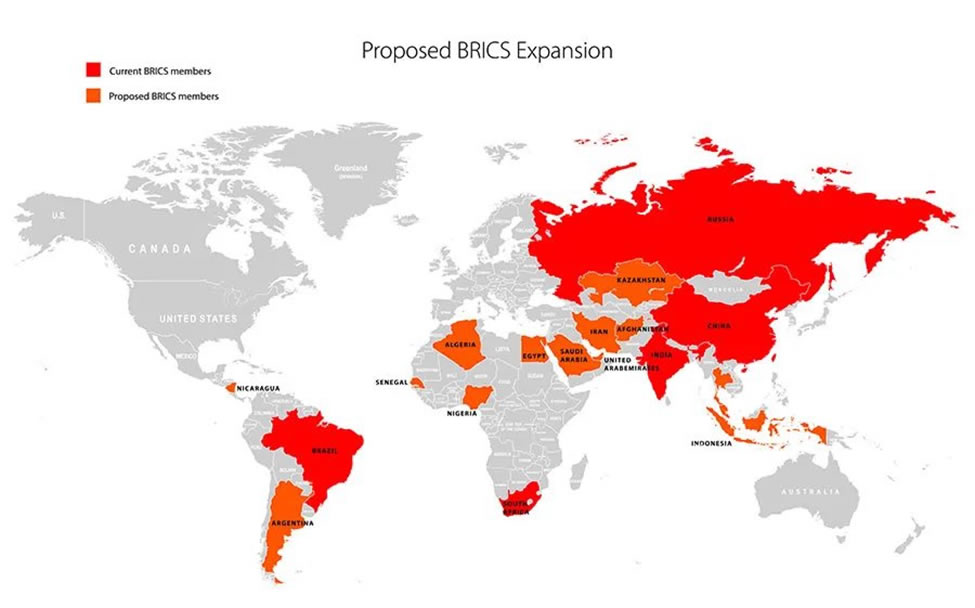 If Saudi Arabia and China sign this agreement, it cements the alliance Trump had (pre-2020) with Russia, Saudi Arabia, Brazil, and India.  This reserve currency will unite the world!  Other factors will as well, but this is a financial, and currency driven blog.  A united world will move in this direction when the conditions are right for this to happen.  Changes we cannot talk about are coming, and these conditions will establish an opening next year for the BRICS Reserve Currency!  This would explain why alt coins and alt coin casino type exchanges have been failing, and will continue to fail.  Remember, not your keys, not your coins!  Keep all Bitcoin off of any exchange!  This podcast below discusses the BRICS Reserve Currency and how it will impact the geo political situation:

Many don’t understand the changes coming in 2023 to the geo political environment.  The point is, there will be an open door next year, to this BRICS Reserve Currency.  We can’t see it yet, but it’s coming and this pending agreement between Xi and MBS gets the ball rolling that way!

The next slide shows detail on what backs up this currency.  A basket of precious metals back the currency, and Bitcoin will be used for international settlements, also known as cross border payments.  Once this all gets laid out publicly, many more countries like Brazil, Mexico, Uraguay, Paraguay, Nicaragua, Venezuela, Iran, Lebanon, Turkey, and many countries in Africa will eventually make Bitcoin legal tender.  Regardless of the timing and details, this reserve currency is significant and it’s coming: 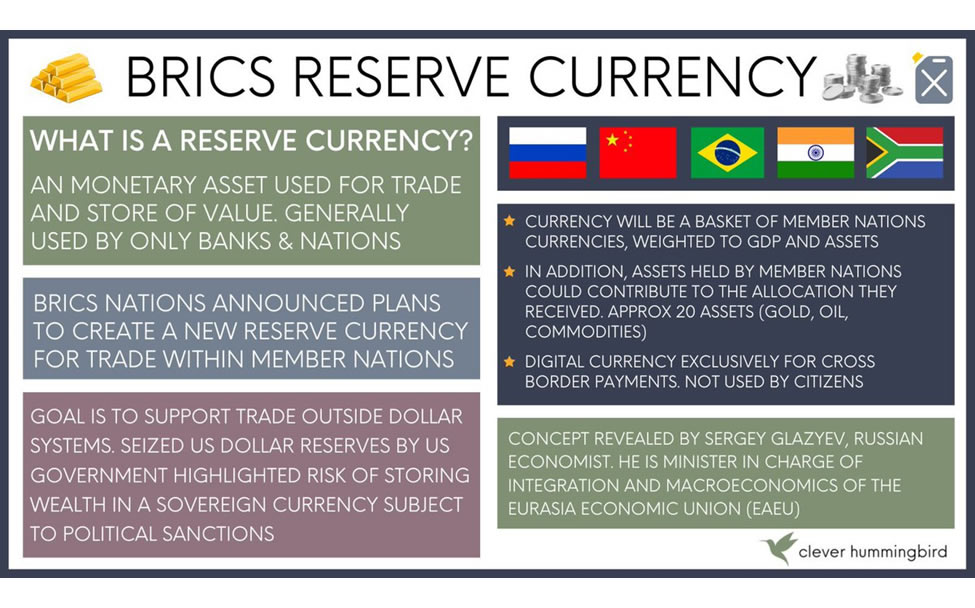 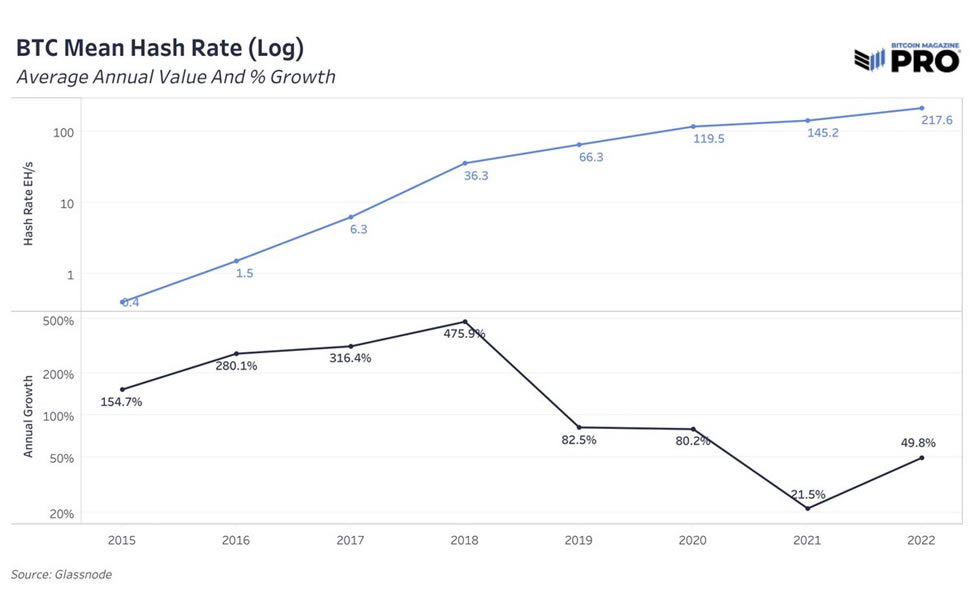 This means the strength and security of the blockchain has never been stronger than right now.  We showed the double bottom that printed over the last week.  Now the MACD cross has happened, and will confirm by January 1st, 2023:

Thanks to Steve Courtney for the above chart.  If this confirms after new years, the blue line would still be on top of the orange line on the MACD chart.  Which means the projection for January would be bullish, even moreso into February, and March.  Sometimes this cross happens and there is a delay of a month or two before price action begins to move significantly.  What we can tell you, is that every time in Bitcoin’s history that the MACD cross is confirmed on the monthly candle close.  Bitcoin price action is up significantly!  The signs are pointing to a major Bitcoin reversal, we just don’t know when exactly.  This next tweet proves that alt coin casinos, aka exchanges are not the place to invest in coins and hold them there, just to get a good return.  This is called re-hypothecation.  They use your money when you bought Bitcoin from them to buy other altcoins.  You get a good return on your Bitcoin in exchange.  But not as good as if you just held it for years offline where you hold the keys.  Self custody!: 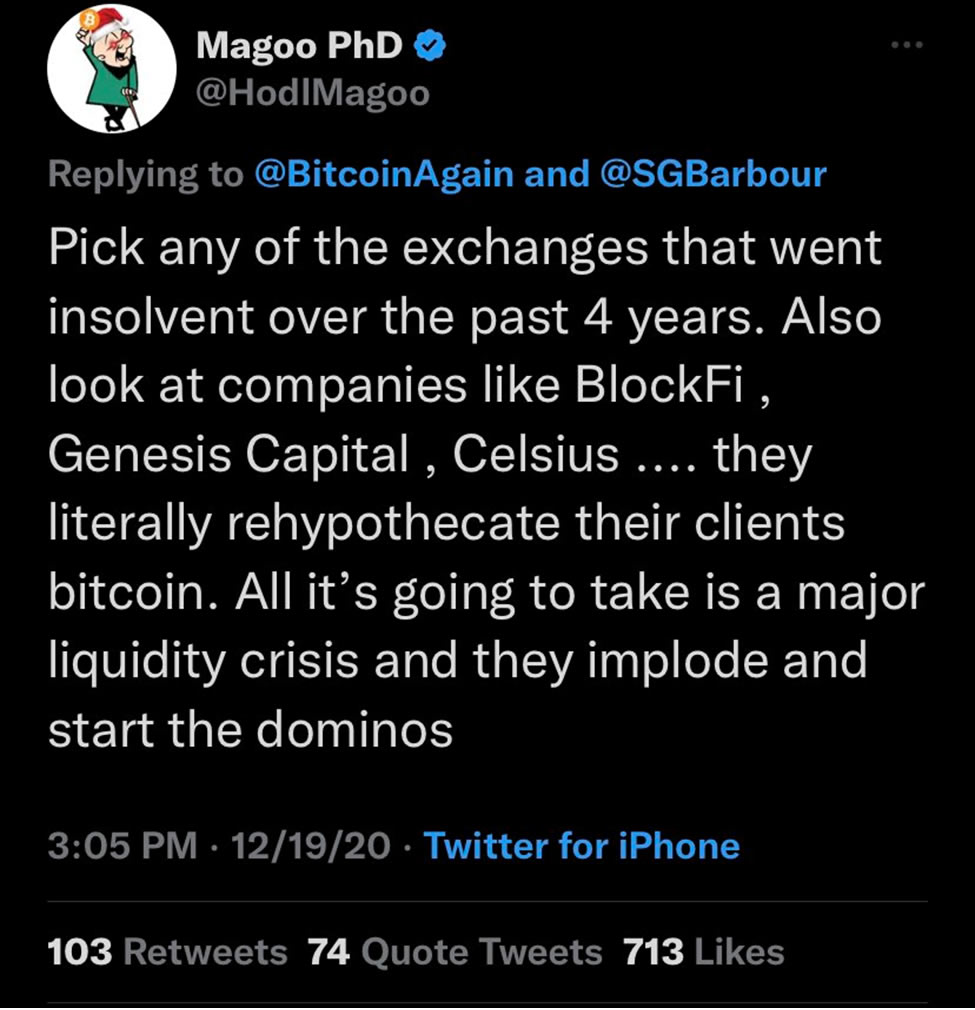 We know this liquidity crisis is coming next year.  Leave no Bitcoin on an exchange!  This is imperative.  As long as the investor holds the keys to there own Bitcoin and keep it offline.  They have no tax burden in most cases, we are not tax experts.  Taxes start when Bitcoin is sold.  Their Bitcoin cannot be confiscated by the government or IRS.  Their Bitcoin is secure and only they control it.  It also, cannot be hacked in a phishing scam.  The geo political environment is going to get worse next year!  This time will pass, but the important thing now is stack Bitcoin and get it offline!  Do that and your fine, from a financial point of view.  This is not financial advise and we are not financial advisors.  Bitcoin may look bad today, if all your looking at is price.  However, in every other area, namely your sovereignty, Bitcoin is healthy.  Wealth and personal sovereignty are under attack in 2022.  Bitcoin is the best way in the world, to increase those two areas.  Sovereignty leads to freedom that is also under attack.  We hope these attacks are lessened in the future.  Until then, we remain sovereign and offline.