Bitcoin will see continued Inflation in 2022

Bitcoin will be the product of an inflationary and a deflationary environment in 2022.  Here is what we mean.  The DXY (USD Index) hit a double top.  Perhaps a dead cat bounce from it’s lows in the summer of 2021?  See the chart below: 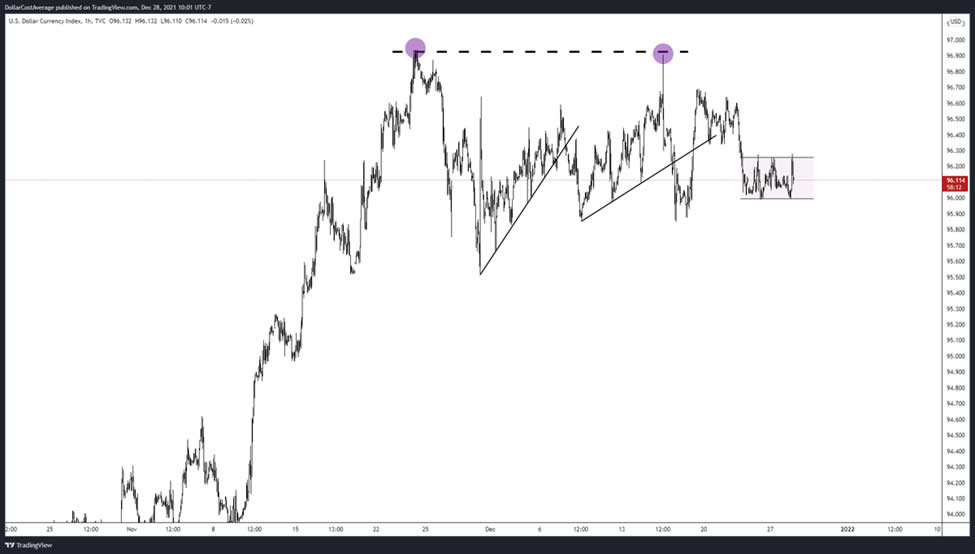 The dollar is weak.  The index does not always reflect that, just like price action does not always reflect the strength or weakness of an asset.  The DXY, we predict, will drop down into the 80’s again like last summer.  We don’t know when.  The expected rate hike later in the first quarter may cause the DXY to climb higher still.  Eventually, we see a policy change coming, back to extended QE.  As the economy shows more pervasive signs of weakening in 2022.  Click to see this tweet thread.

If, after the first rate hike, or the second, signs begin to appear, watch for how the Fed responds.  Announcing rate hikes now is one thing.  Can they keep that up long term, enough to stop inflation?  We say no.  The damage would be too severe.  Why?  Because as rate increases mount later in the year, there will be lower bond yield requirements from pension funds.  So, as rates climb a deflationary environment ensues.  Pension funds would be happy, but higher rates hurt asset markets (stock and real estate).  Thus, better bond yield targets would have to be sacrificed in order to stop a deflationary crash in stock and real estate.  We expect the Fed to reverse course and act to leverage against a crash.  They do that by re-enacting QE (quantitative easing).  If they do not reverse course and re-enact QE, fortune 500 companies, kept afloat by QE through stock buy backs, and bank reserves, will lose their life raft!  Bank reserves are on the TGA (treasury general account), to be loaned out to qualified borrowers.  These fortune 500 borrowers were counting on bank reserves, loans, to buy back there own stock.  Take that away, stock market deflationary crash.  We do not believe the Fed will let it get to that point.  They will fire up QE before a crash is kicked off by rate increases.  Another scenario, is rate increases happen, and the QE begins later on, nipping the crash in the bud.  Either way, it makes more sense that QE makes a come back whether in the first quarter or much later in the year.  We don’t know timing.  We can predict Fed reactions to outcomes though.  Understanding how the Fed will react, makes a lot of sense.  Asset markets are manipulated thorugh QE and bank reserves.  Rasing rates ends this practice and we don’t see the Fed being able to complete that task.  They may start it, but continuing it is another thing altogether.

This next chart shows 5 year bond rates in the US (red) compared to the same rates in China (blue):

The US is behind China on national debt and debt to GDP ratio.  Will the US fight to keep rates lower, as they have been consistently for 14 years?  What does this have to do with Bitcoin?  If what we think may happen actually does, and QE is re-enacted sometime in 2022.  Bond yields will drop.  Pension funds and institutional investors will have to venture out the risk curve even moreso.  Because inflation would increase if QE was re-enacted at this point.  There is no historical precedent for this to happen.  Normally the Fed raises rates and that’s it.  But this bubble is the everything bubble.  Can they afford to let it pop?  We say no, they cannot.  Therefore, and this is a departure from what we thought all of 2021, the Bitcoin bull market may lag for months in consolidation until the Fed’s true intent is put into action.  Right now raising rates is out there, in the media.  Yet, that action has such dire consequences, will it come to fruition?  We question that it will.  All we CAN do is question.  We have no levers to pull.  No dog in this fight.  Here is a good Politico article about the Fed.  It shows the damage that QE has done for 12 years and therefore, undoing now, at this late juncture, seems too knee jerk, click here to read more.

So, the economy is at a crossroads.  Keep QE or not.  A deflationary crash would send scared money into Bitcoin.

A re-enactment of additional QE would send institutional investors, pension funds out the risk curve.  Into Bitcoin!

So for 2022, we see an odd development.  We did not have all this institutional investment in Bitcoin for any of the past bull runs.  This one is different.  Until it is revealed what the Fed will enact, as opposed to speak publicly, we cannot time the parabolic turn up.  We expect it, this cannot go on like this forever.  It can, however, last a long time in no man’s land, consolidating.  We have been wrong soo many times trying to predict the parabolic turn up.  The Fed has not made it clear enough yet, what they will do.  Once the path is clear, money on the sidelines WILL get in to Bitcoin.  Yields cannot fail for that long.  The entire system would crash, Bitcoin is the answer on getting yields up.  It just has’nt happened yet!  Doesn’t mean it won’t happen, just not yet!  So watch the inflation in 2022, if QE comes back, so will inflation.  Obviously.  Then, Bitcoin will run, and run big.  We just wait for it.  That’s all!