Bitcoin Will Run Away from the USD! This is War!

There is, and has been growing sentiment among Banks, Nation States, Hedge Funds, and Institutional Investors that Bitcoin is THE Hedge to stave off out of control, run away inflation!  Now Tim Cook, CEO of Apple has admitted to owning Bitcoin, here is that article, click here to read.

We have been writing about how Bitcoin is the liferaft, the escape hatch from this Authoritarian, Marxist, self induced, destruction of the US economy!  Decentralize, store your wealth in a scarce, digital asset, built on the most secure network on the planet.  Also, store your keys offline.  Not your keys not your coins.  Once that happens, and enough people do it, 100 Trillion Bitcoin users globally.  Bitcoin will have surpassed the US Dollar.

This quote is from Pantera Capital:

“The unlimited printing of money will push up the price of things whose quantity cannot be eased.”

There is no quantitative easing of Bitcoin supply.  It gets tightened every four years with the halving of the miner reward.  After a brief miner capitulation and consolidation, the supply shock kicks off a bull run for 18 to 24 months after every halving day.  Every 210K blocks of Bitcoin on the Blockchain, the miner reward is halved.  It happens in chronological order, like clockwork.  Every block is mined in about 10 minute intervals.  Thus, the halving is predictable as to when it will happen.  This is what makes Bitcoin rhyme!  This is why we know with confidence this bull run will go parabolic, probably already started to happen.  This next chart from Pantera Capital is the US Dollar priced in non QE assets: 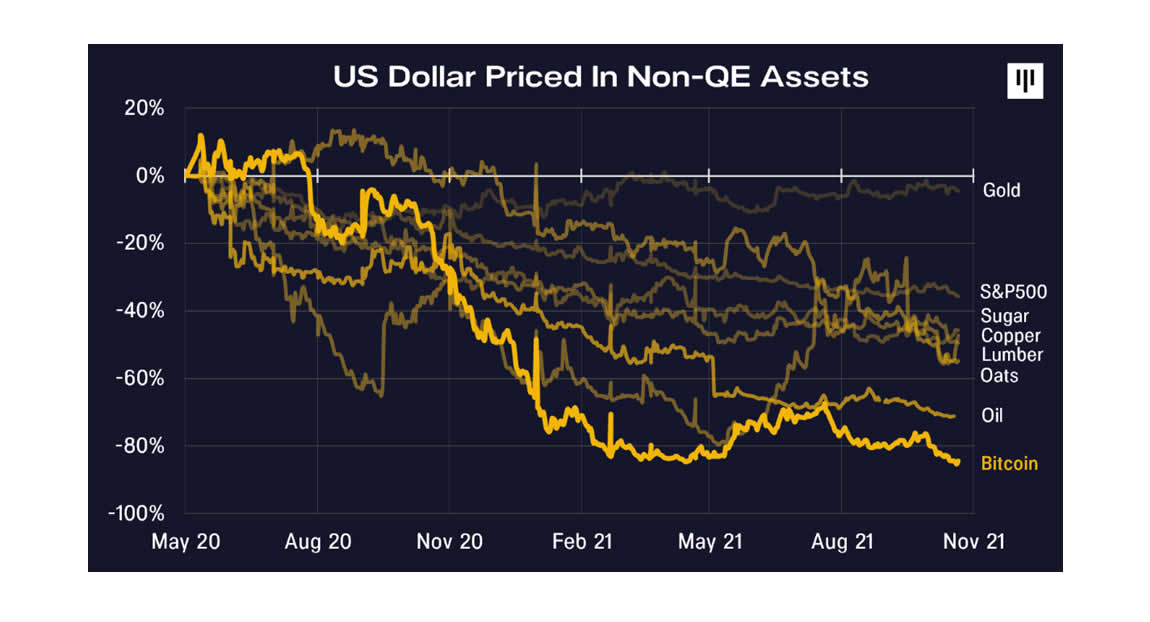 Goods and services all get cheaper when your wealth is stored in Bitcoin.  It is similar to getting an 80% discount using all money stored in Bitcoin to purchase goods and services.  If you use USD to purchase those same goods and services, the prices raise 1% to 1.5% every single month.  This is because monetary devaluation causes every dollar saved to lose it’s value.  Saving in Bitcoin has the exact opposite effect.  Bitcoin is money, but unlike the USD, it is a DEFLATIONARY CURRENCY!  Storing wealth here means your money goes much further.  Try saving $1,000 in Bitcoin compared to $1,000 in USD for 3 months and see what outperforms by February 2022.  Below are the yearly candles for Bitcoin.  It started at $0.008/coin in January 2009.  Now Bitcoin has hit $69,000!  A new all time high!  Here is the yearly candle Bitcoin chart:

CPI came in at 6.2%.  Yet, real inflation is, like we always say 12% to 17% depending on your geography.  Want proof?  Here are real inflation numbers over the last 12 months:

Guess Gold is not a store of value anymore, Bitcoin took the mantle!  We agnowledge Bitcoin will drop into a bear market next year, and will address that major issue at the appropriate time.  If Bitcoin always rhymes, that has to include bull, and bear markets!

This boom bust economy and the real cost of inflation has been fussed and discussed for the mellennia.  In 1912, the year before the Federal Reserve was officially formed in the US, Alfred Owen Crozier drew this cartoon: 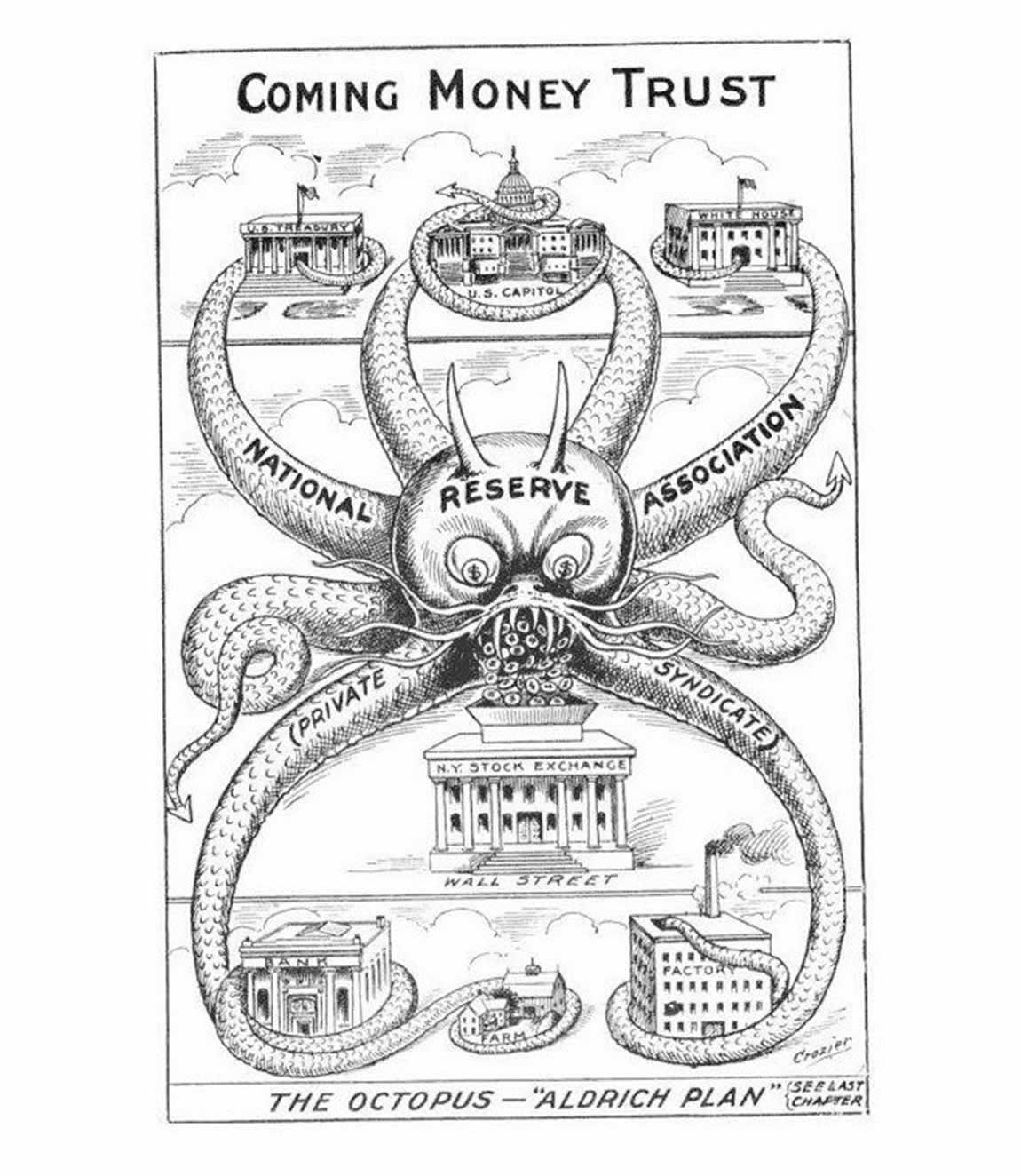 He was opposed to the central bank.  A private corporation controlling all debt, loans, credit, and money flow in the country.  Central Banks since this time period have also gone on to control real estate, mass media, all political parties, pharmacueticals, health care, and the entire judicial system.  Not only in the US, but globally.  Therefore, this is war!  Financial warfare fought without guns!  Those on the side of the USD (global reserve currency) choose to borrow and obtain credit.  Holding wealth in a dollar that loses 1% to 1.5% of it’s value every month.  Meanwhile, those that choose freedom, which is decentralization, allow the free market to bring a market based price to a currency that is truly scarce.  Bitcoin.  Choose wisely.  There are winners and losers!

Here is another set of cartoons by Alfred Owen Crozier: 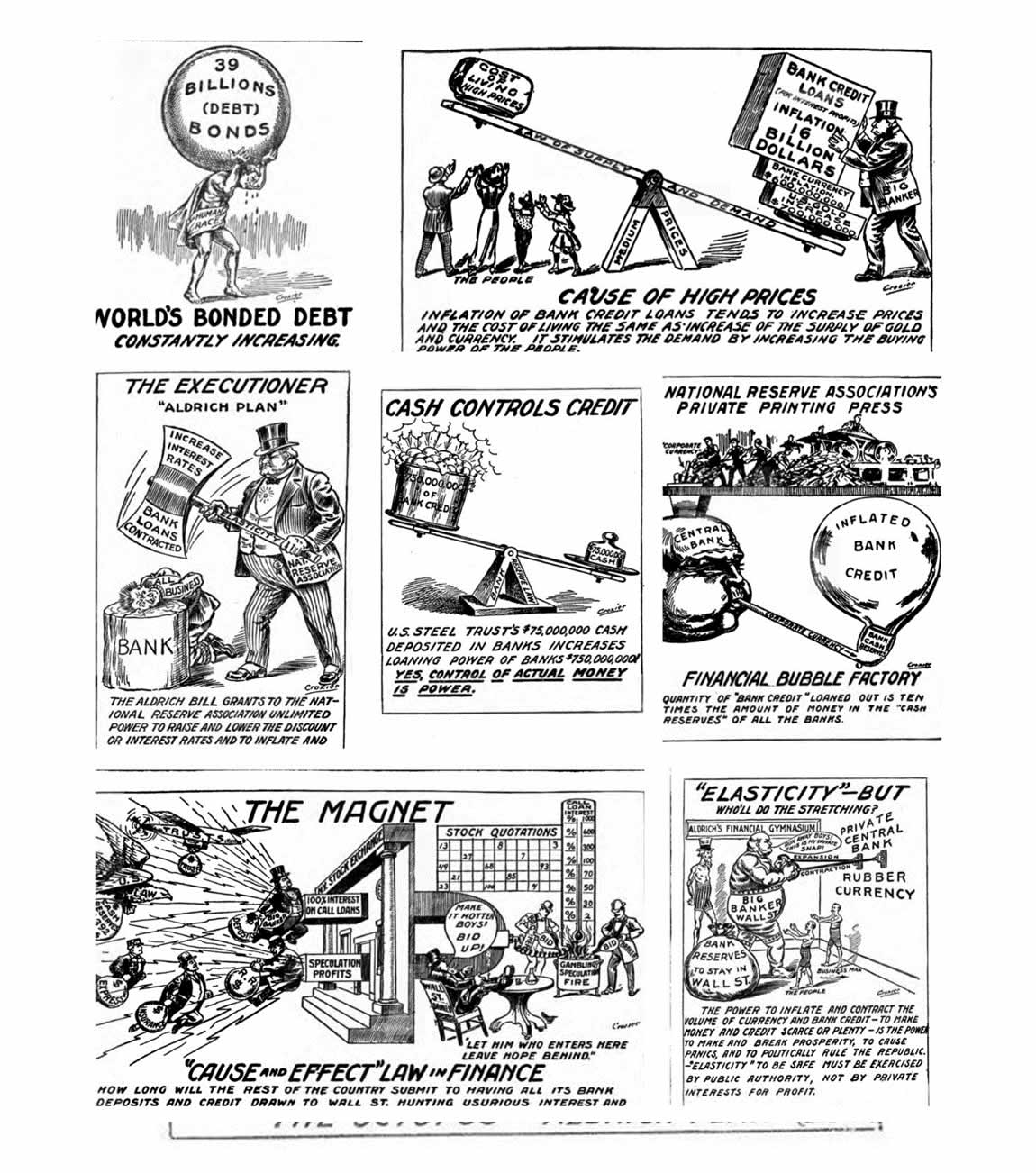 By not choosing what side you are on, the choice will be made by the market for you.