Last week, we took vacation and visited the South East Coast (including Jekyll Island, GA).  Jekyll Island is where the original secret meetings were held to discuss and later form, the first US central bank.  President Herbert Hoover was there with representatives from the following banking families:

Later Herbert Hoover lamented that he had given over so much economic power to so few people that the US Economy would be forever dependent on the central bank.  He goes down in history as a very bad, and corrupt President.  Yet, the central bank is still here, and every central bank chairman is appointed, not elected.  In spite of the history of MMT (modern monetary theory) not working long term, it is alive and well in the US.  Below are two charts.  Each showing how centralizing control over money supply hurts an economy.  The Weimer Republic in Germany before WWII is a good example.  In the years leading up to the eventual collapse of the monetary system in Germany, money supply growth was a hockey stick.  It came to a head in 1923: 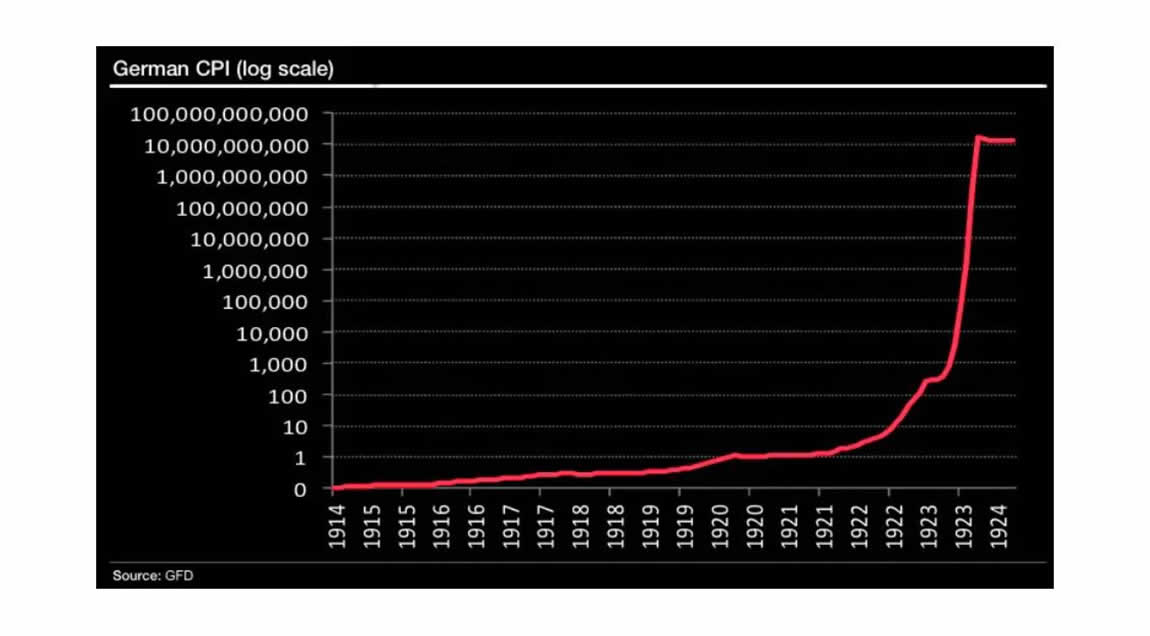 In the next chart is the US money stock or money supply chart: 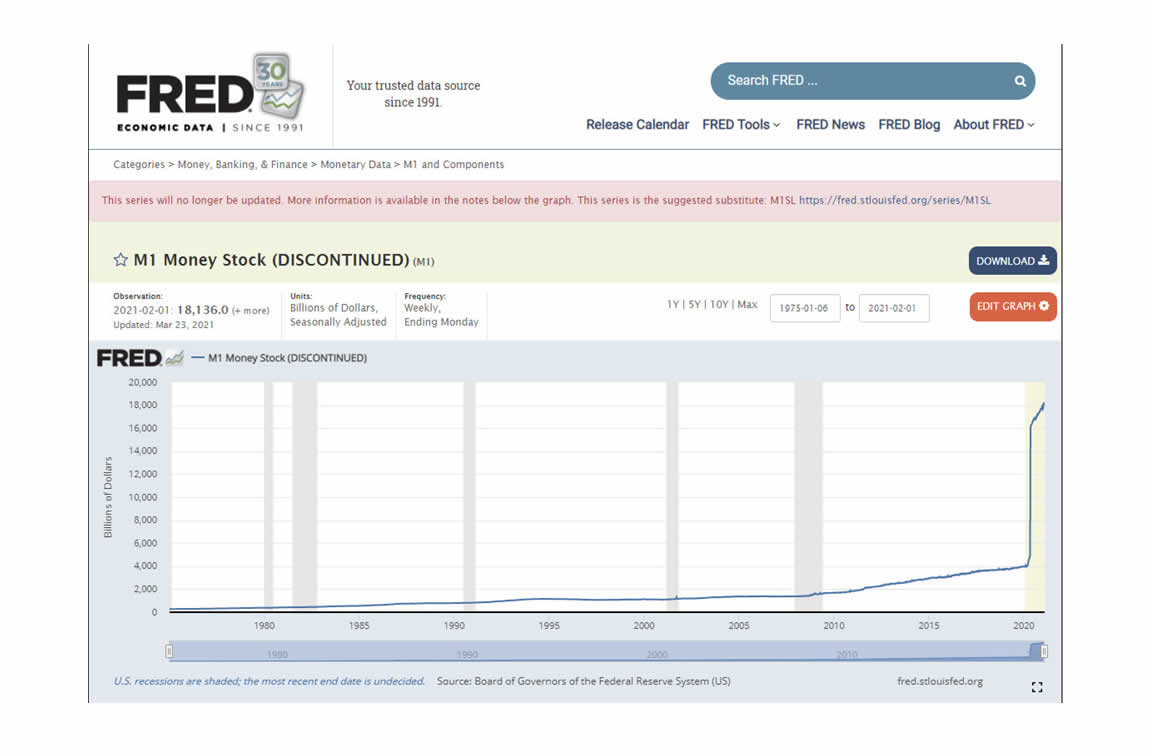 Although the German chart is a log chart, the pattern is similar and the outcomes from a monetary system standpoint could be as well.  We won’t discuss politics, so we will leave this strictly at a monetary system level.  Bread in Germany went from $0.13 in 1914 to $Billions per loaf in 1923.  What will everyday goods and services cost in 2029 in the US?  Time will tell.  Hopefully, good yet drastic changes are in store.

The lifeboat from out of control inflation continues to be Bitcoin.  Below is a chart tracking the returns over 10 years of Bitcoin, Gold, and SPX.  Obviously, Bitcoin is by far the best hedge against inflation, while Gold is now negative: 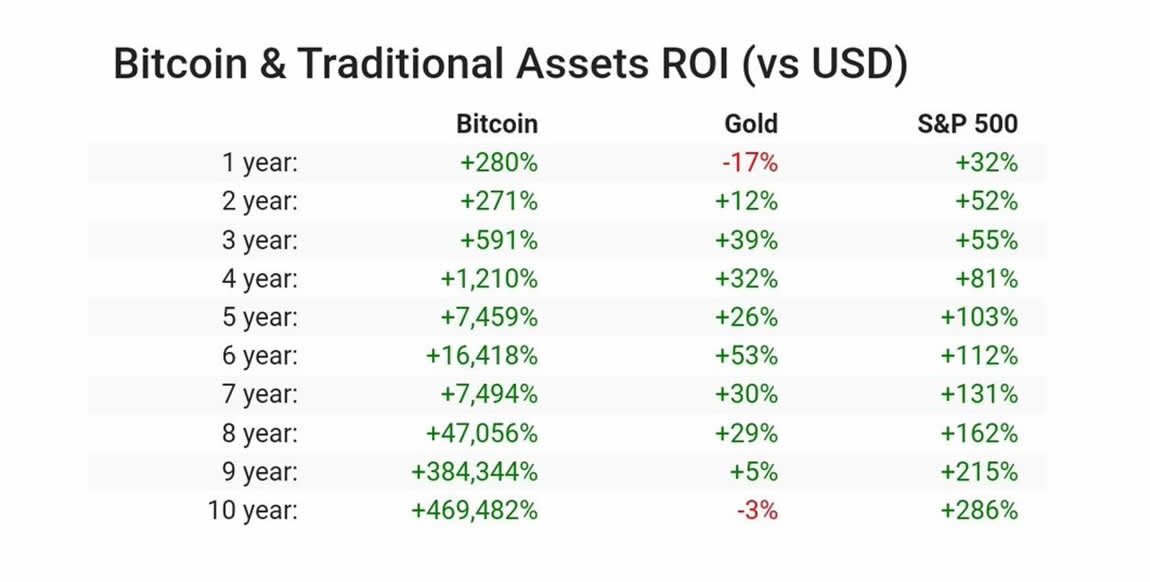 Inflation, as best we can tell (M1 and M2 money stock are no longer tracked by the FRED.com website), is still in the 12% to 15% range in the US, for goods and services.  We expect this to rise every year for the foreseeable future, until these before mentioned, drastic changes.  We cannot predict what drastic changes lie ahead.  What we do know is Bitcoin is the best hedge against inflation.  Also, Bitcoin truly is decentralized.  No matter what is in the now $3.5 trillion infrastructure package being negotiated in the senate and congress, Bitcoin will still be mined on the blockchain.  Every 10 minutes a new block will still be mined.  The miner reward will cut in half in early 2024 after exactly 210,000 blocks have been mined since the last halving on May 11, 2020.  This will all happen regardless of what congress and the senate do with this latest infrastructure package.  Bitcoin has climbed from $29K to $46K in the last few weeks as all of this has been going on.  We expect more delays until an outcome is revealed from this infrastructure package.  It is quit likely inflation will be the number 1 result.  We expect 20% plus annual inflation on a goods and services basis sometime in 2022.  If not sooner.  The time to prepare is now!

Bitcoin must be part of this preparation if outpacing inflation is the desired outcome.  The Wykoff distribution pattern shows (IMHO), that Bitcoin is in phase D right now.  The price action could remain choppy between $36K and $49K for a while.  When does phase E start, when price action really goes parabolic?  Anyone’s guess.  A fair prediction would be that we are a number of weeks away from that.  It could be October or later before that kicks in!  See the chart below for the Wykoff distribution pattern:

It is also important to note that Bitcoin has now broken above the 200 week moving average:

Perhaps that means the price will remain in a range until enough time has elapsed that supply of Bitcoin is so low that it reaches the parabolic stage.  Just like the last consolidation period lasted longer than expected.  This next one could as well.  Good news is, illiquid supply is trending up.  Small retail buyers are increasing their holdings of Bitcoin and not selling any of it!  That’s what this next chart means: 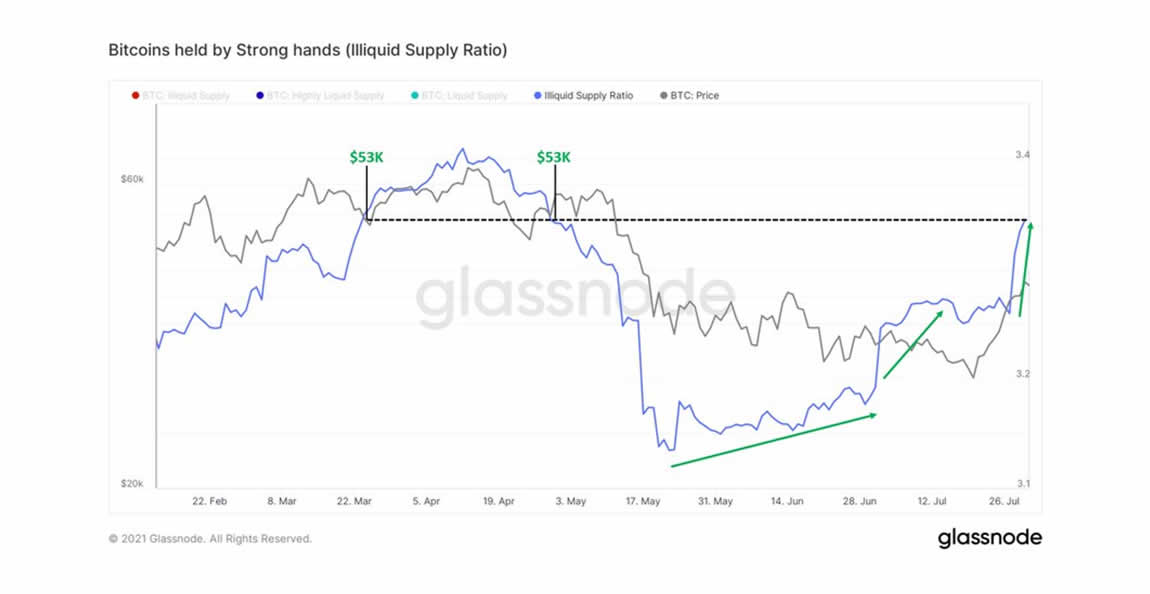 If anything drives Bitcoin to the new ATH sooner than later, it will be illiquid supply ratio that does it.  As the supply of Bitcoin becomes more illiquid (not being sold), that will create a larger and larger supply shock.  Demand will increase as price does, yet illiquid supply also increases.  Meaning there is less Bitcoin for an ever rising demand.  A supply squeeze or shock ensues.  This is where the parabolic price action will come from.  10% plus daily candles for weeks on end!  We see that coming this fall!  First, you have to buy some Bitcoin and hold it!