Bitcoin is in the mid bull run dulldrums between the two tops.  We expect a double top bull run this year.  It was 90 days of dulldrums before Bitcoin climbed from $29K to over $50K and is now settling in the upper $40K’s.  The charts below show us where we expect it to go the rest of the year.  It will be a long time until Bitcoin anticipation is this high again.  We expect it to go Parabolic at least by mid October, maybe sooner.  Below is a tweet from Plan B back in mid June about his worst case expectations for Bitcoin.  August will close tonight at midnight.  We would love for it to close above $49K but unfortunately, it has fallen to $47,295 with hours until the monthly close.  This is NOT bearish.  See the Plan B worst case scenario from 2.5 months ago: 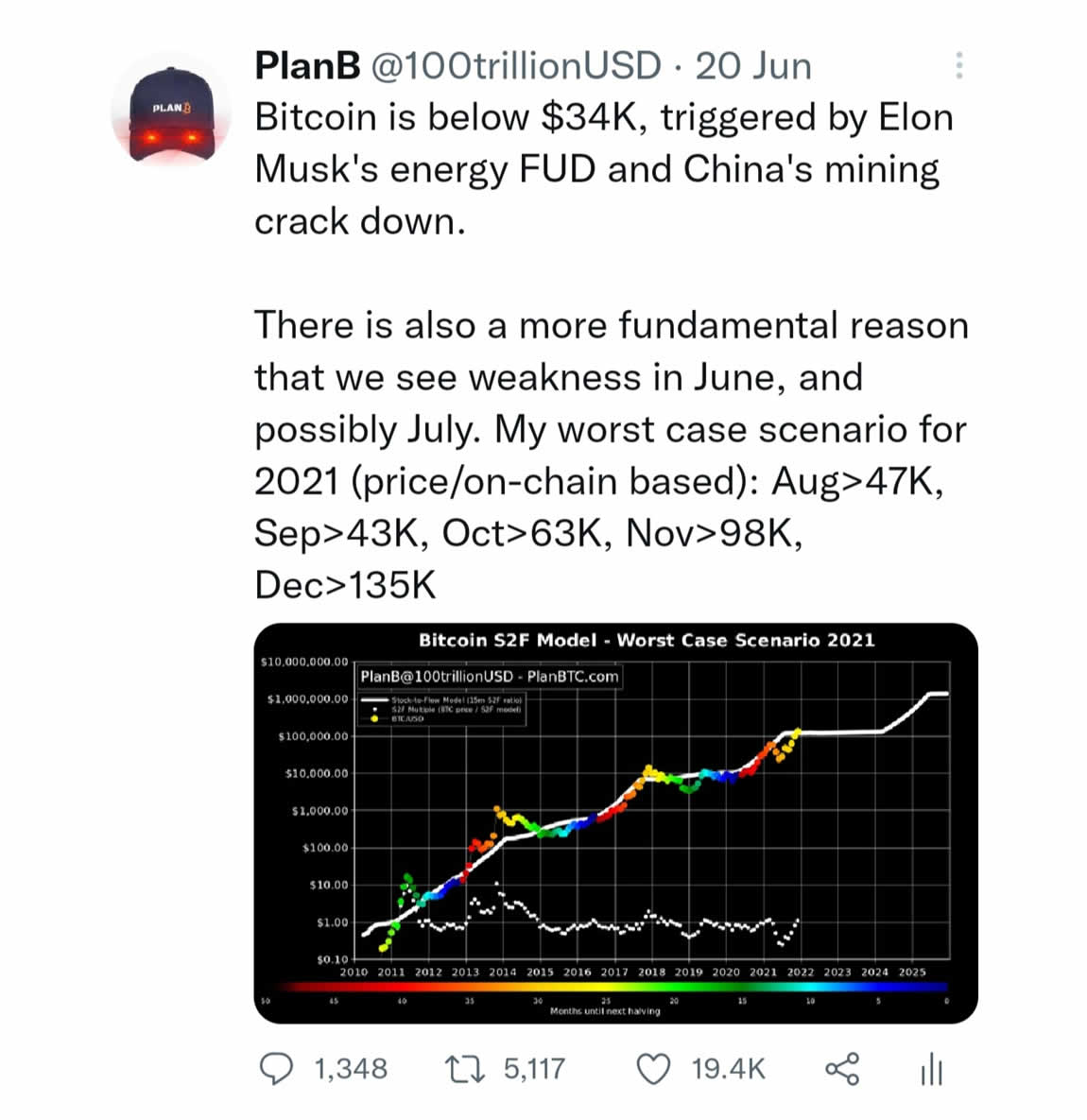 Below are several chartes all from Glassnode on where the leading indicators tell us Bitcoin is going.  If we track this carefully it tells a story.  Since the April ATH peak of Bitcoin, number of active entities is -35% below peak: 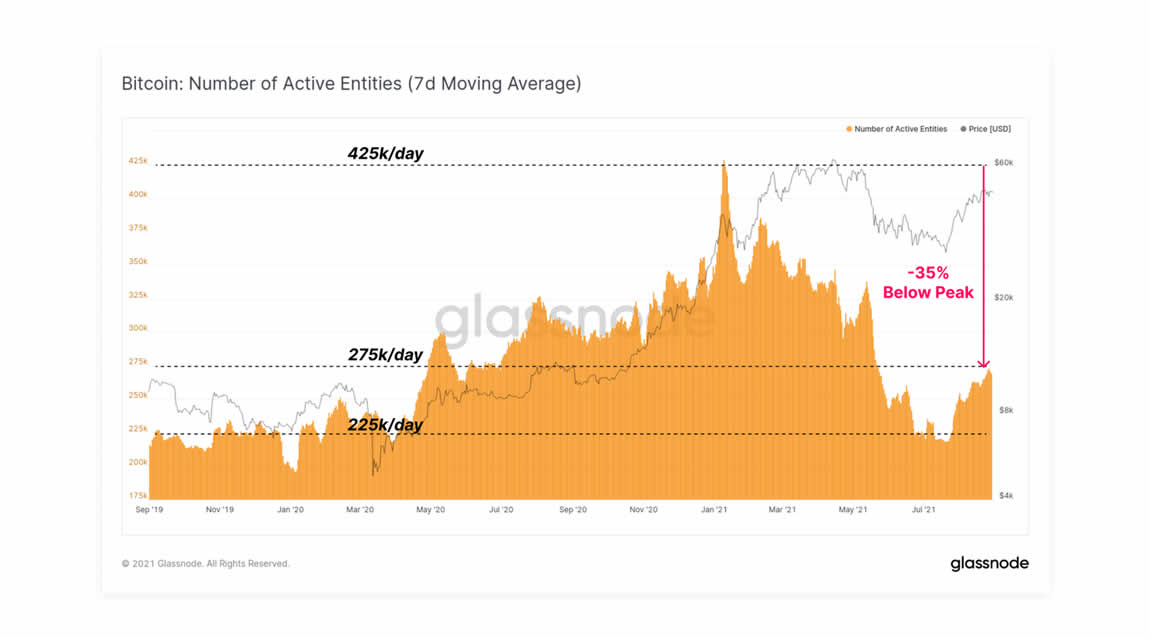 Number of Bitcoin transactions is down -37.5% below peak: 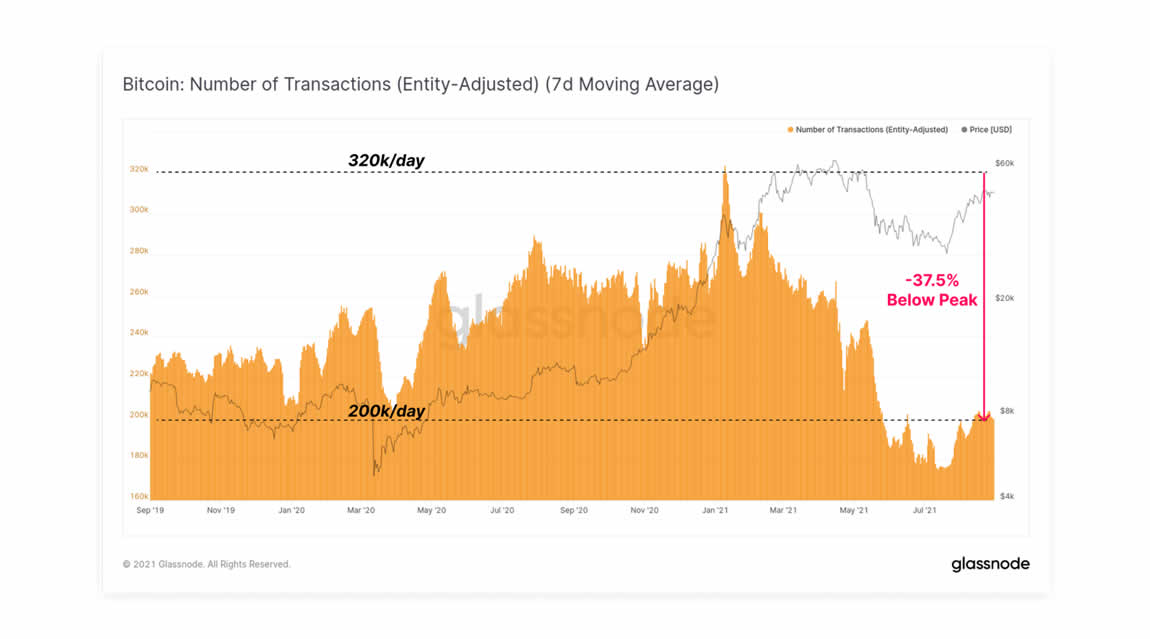 SOPR (spent output profit ratio) measures price sold/price paid for Bitcoin investments and ratio’s that.  It tells us when the SOPR ratio starts turning when a rally is about to start.  We are nearing that point.  Timing is never absolute.  SOPR helps see when momentum is coming back for Bitcoin.  See below: 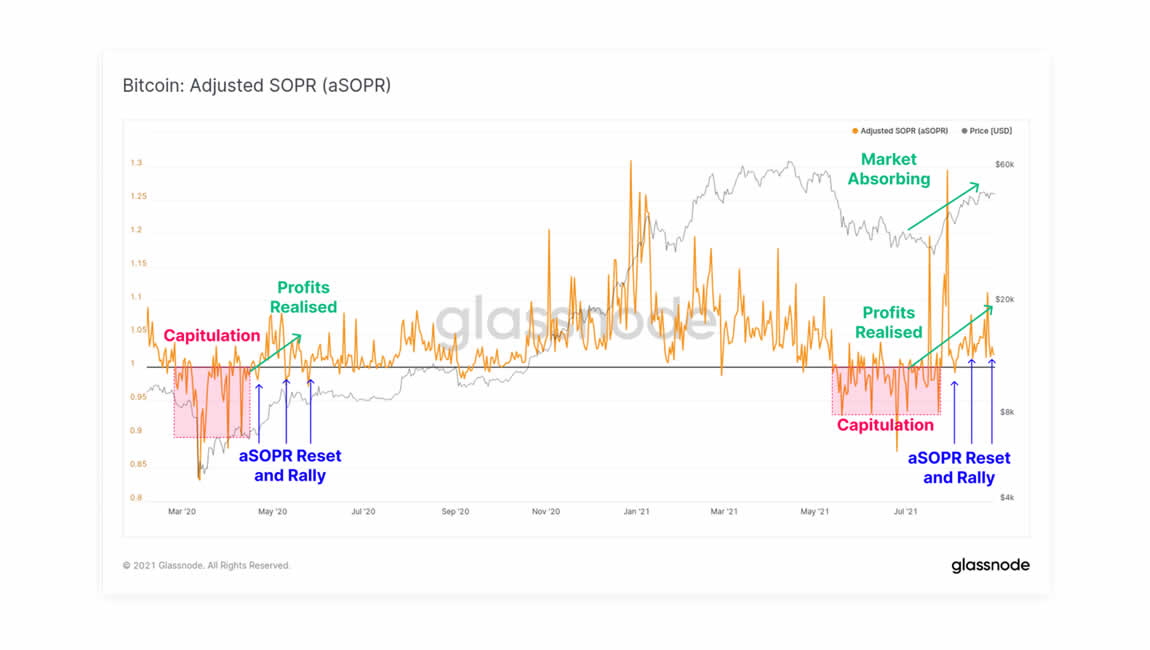 Notice the three touch points on the support line for SOPR.  Also notice there is a delay before the rally takes form.  Thus, we are’nt sure if Bitcoin will rally in mid September or will it delay to mid October.  $50K has proven to be a stubborn resistance level to break through.  $40K was as well in May through early August.

Now let’s look at young coins vs mid to old coins.  Those who have owned there coins for a few months vs a year to up to 10 years.  First chart is HODL wave for young BTC.  HODL stands for “hold on for dear life”.  More veteran Bitcoiners, can appreciate how hard and how valuable this is!  Here is the chart: 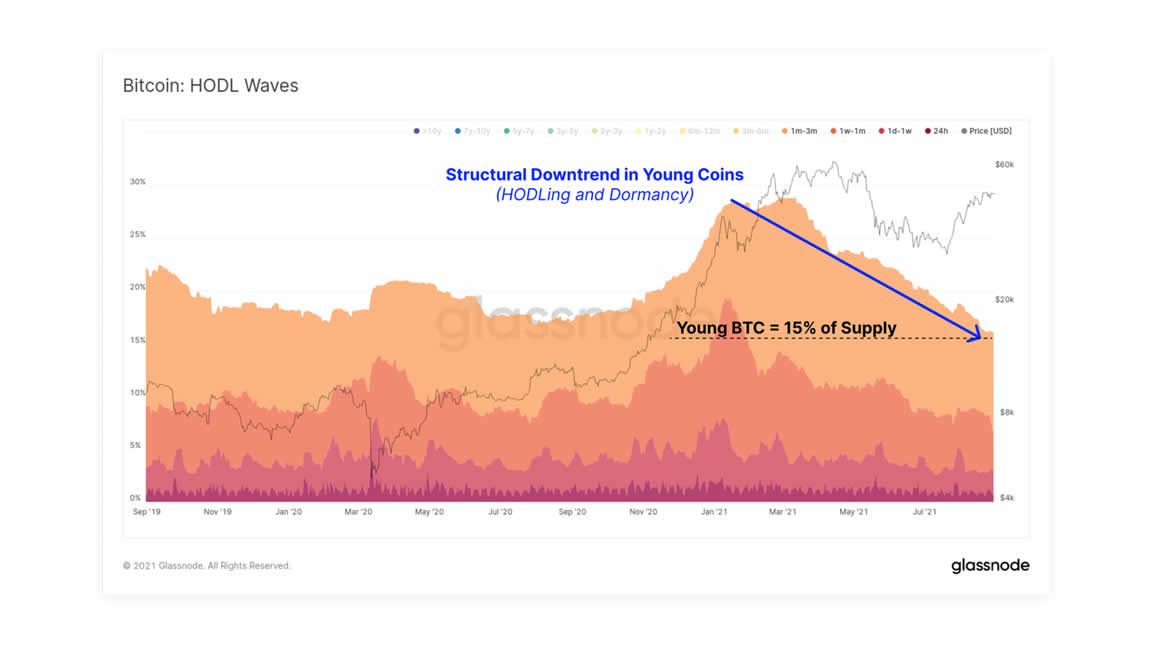 See how the younger Bitcoin holders have a tendency to panic sell, trade, and make mistakes.  Below is the HODL wave for mid to old coins.  The trend is HODLing and accumulation.  It is natural for the older coins to be owned by HODLers and not traders.  Neutral ATM does not recommend trading, and we don’t do it often at all.  In fact, we have not sold our Bitcoin, ever.  Here is the chart: 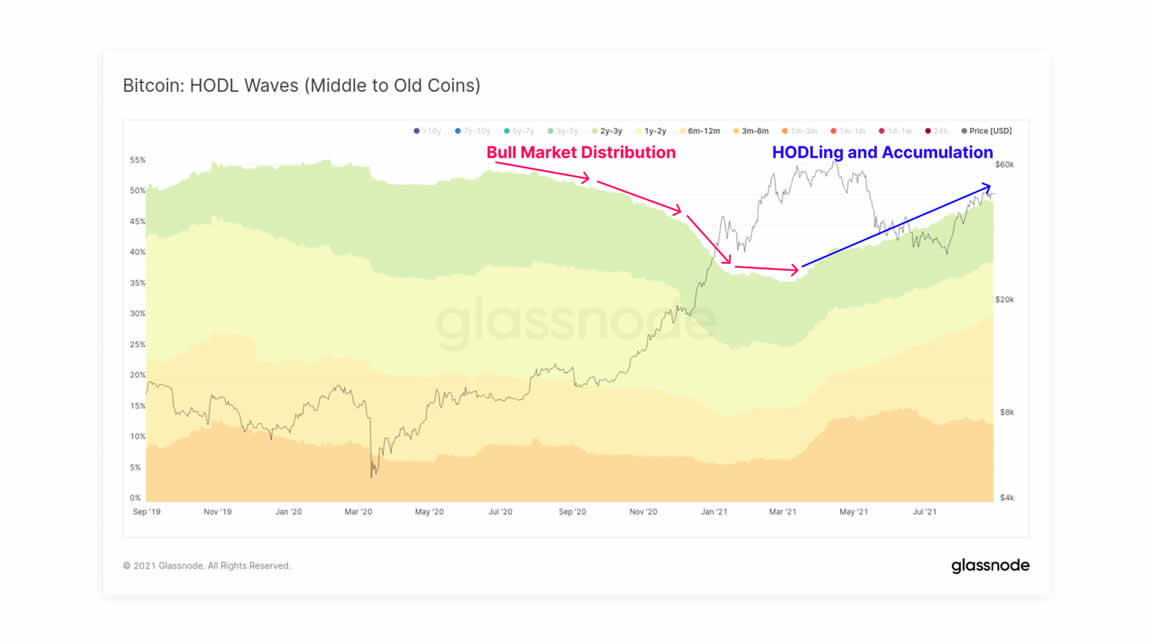 RSI is the relative strength index for Bitcoin.  Notice when the blue line underneath (30 day MA) crosses over the red line (60 day MA), a rally unsues.  RSI, similar to SOPR, tells a rally is about to start.  The blue line has to be on top and it has to rise above 20 RSI.  See the chart below: 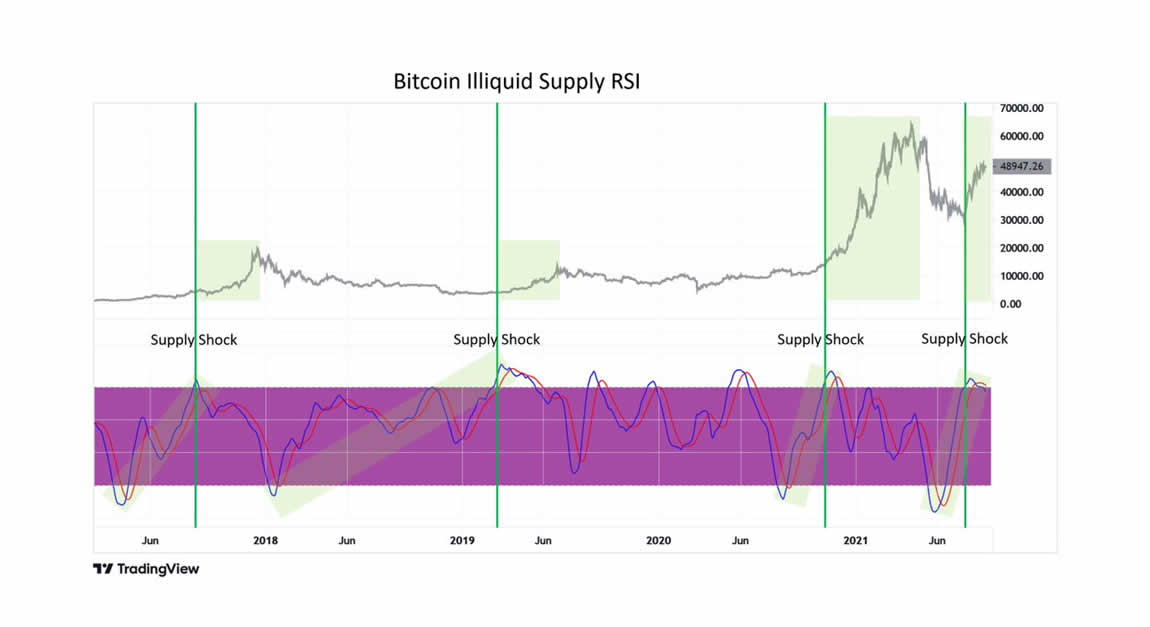 The RSI is above the 20 level and as long as RSI and SOPR remain strong the remainder of 2021, this Bitcoin should get really wild, October, November, and December.  Remember to store your coins offline and protect your private keys with your life!  Security is an often underutilized tenant of Bitcoin!