Before we get into TA (technical analysis), we have to discuss these two topics, price controls in the US, and the devaluation of wages and salaries in CPI terms.  First, price controls.  President Biden mentioned price gouging in a speech this week in Davos, Switzerland.  He claimed price gouging as a reason for the soaring food prices the US is seeing right now.  No mention of inflation, M2 money supply growth.  Although we disagree about price gouging being a reason for soaring food prices in the US.  Language like this leads to intervention from the FED!   Be watching out for language in the near future involving price controls coming from the FED or Janet Yellen.  If they institute price controls, that could lead to higher inflation because of this intervention.  We have seen this in Argentina most recently.  They implemented this policy and it made inflation worse!  All we are saying here, is watch for any language involving price controls from the FED.  Hopefully, it never happens! 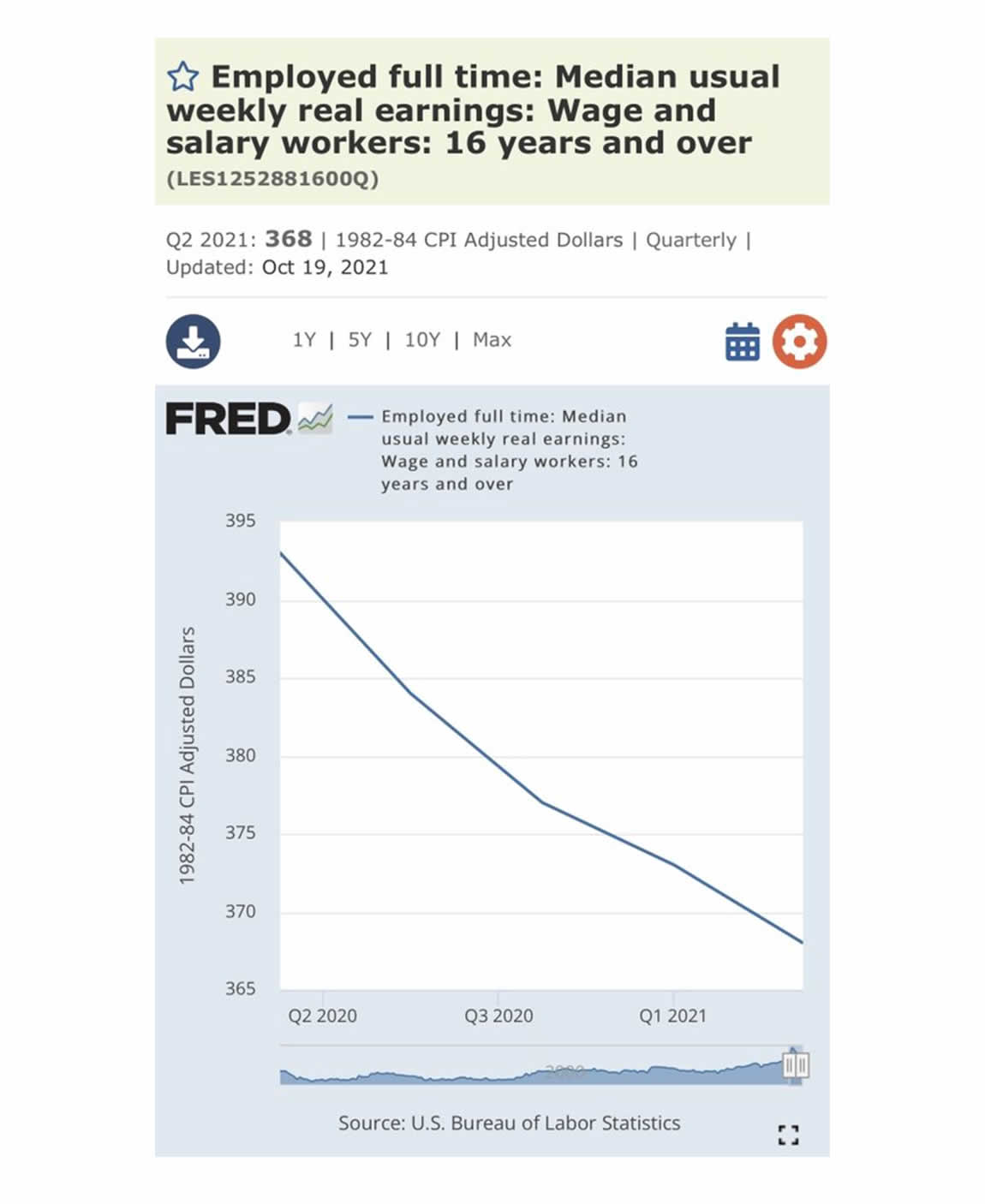 Remember, CPI adjusts real inflation back to 1982-1984, then calculates inflation on top of that.  So even though CPI is now 5.4%, real inflation is 12% to 16% depending on geography (where you live).  This hidden tax of inflation is much worse than is reported in the news.  The President is blaming price gouging, which is a precurser to price controls!  This would take the US in the opposite direction from where it needs to be going!  Concerning.  All the more reason, the world NEEDS Bitcoin!  The life boat, the escape hatch from totally out of control government money printing, and financial intervention.

As for the TA, giving us hints as to when Bitcoin will moon?  Below are charts from Crypto Crew University and Steve Courtney.  The first one is focusing on the 2013 bull run fractals.  A first top in April, consolidation in the summer, August and September hitting the green line on the chart, which is resistance.  Then, in November, it turns parabolic up to the cycle top:

These fractals play out every four years.  The 2021 bull market is rhyming with 2013.  April first cycle top, summer consolidation, August & September hitting resistance, breaking through a little in October.  At this point we are waiting for the parabolic turn, IN NOVEMBER!  The next chart is showing us the stochastic RSI, the blue line is on top and pulling away from the red line.  That is good.  It needs to top 71.5 RSI:

If we get to the end of the month and Bitcoin is still grinding up slowly, then the rhythmic nature of each cycle is changing.  Most likely that means Bitcoin is maturing into a super cycle.  Whereby, bear markets are much less pronounced, and so are bull markets.  This is what eventually happened to the internet after it had matured.  Plan B and other other analysts have believed we are in the late 90’s phase of maturation (if comparing Bitcoin adoption, to the internet).  We believe that too.  So if we are still in that early adoption phase, we cannot also assume the super cycle will start in 2021-2022.  Therefore, our premise is, we are still too early for the bear market, bull market structure of the 4 year cycles to end.  Thus, if that is correct, there will be no super cycle in 2021-2022.  Instead, our premise is a parabolic bull market in 2021, maybe it lasts into very early 2022, then a bear market 2022-2023.  Plan B, and Steve Courtney are in this camp, others are not.  We see so much rhythm in each cycle, it is very hard to believe that the rhythm will end this year.  So far, Bitcoin’s rhym with 2013 has been perfect.  What factor is going to end that now?  Institutional investors, nation states?  We believe the maturation process needs much more time before the super cycle begins.  In this final chart we see the November parabolic turn in 2013.  If this shows up in November 2021, lasts into December.  We will expect a blow off top.  That is for future blogs.  This parabolic turn up is what we are watching for now.  The RSI did not let up Monday, and Tuesday, therefore, we did not see the dump Vince Prince expected.  TA is important, although it is difficult.  The rhythm in each 4 year cycle is what makes technical analysis much easier.  Once the super cycle has begun.  Our tactics on Bitcoin investing will have to change.  Here is the chart, it shows the yellow line on top, where Bitcoin tops out.  If the turn we are expecting happens this month, Bitcoin will likely hit this top yellow line on the chart in December.  Steve Courtney predicts this top in the $136K to $140K range.  Our prediction is broader, $135K to $190K.  First, we have to see this parabolic turn up!:

The longer this takes, the higher the price target.  As of now, we see this all playing out in under 8 weeks from now.  If that is wrong, and the super cycle is here.  We will have to adjust, and will write about it at the appropriate time.  For now we are waiting and watching.  This is not financial advise.  Invest with caution.