Bitcoin Still Consolidating, As Evergrande Crisis Rages Into The Forefront

On Friday, we discussed the China Evergrande situation.  We left it with; China has massive real estate risk, US has massive stock market and debt risk.  Today, the VIX index is up 20%, the stock market tanked 700 points, and Bitcoin is down nearly 8%.  We will attempt to unpack all this in a little more detail than Friday.  However, the theme of Friday has NOT changed.  Bitcoin is still in a bull run.  First we should remind everyone about the US Debt Clock: 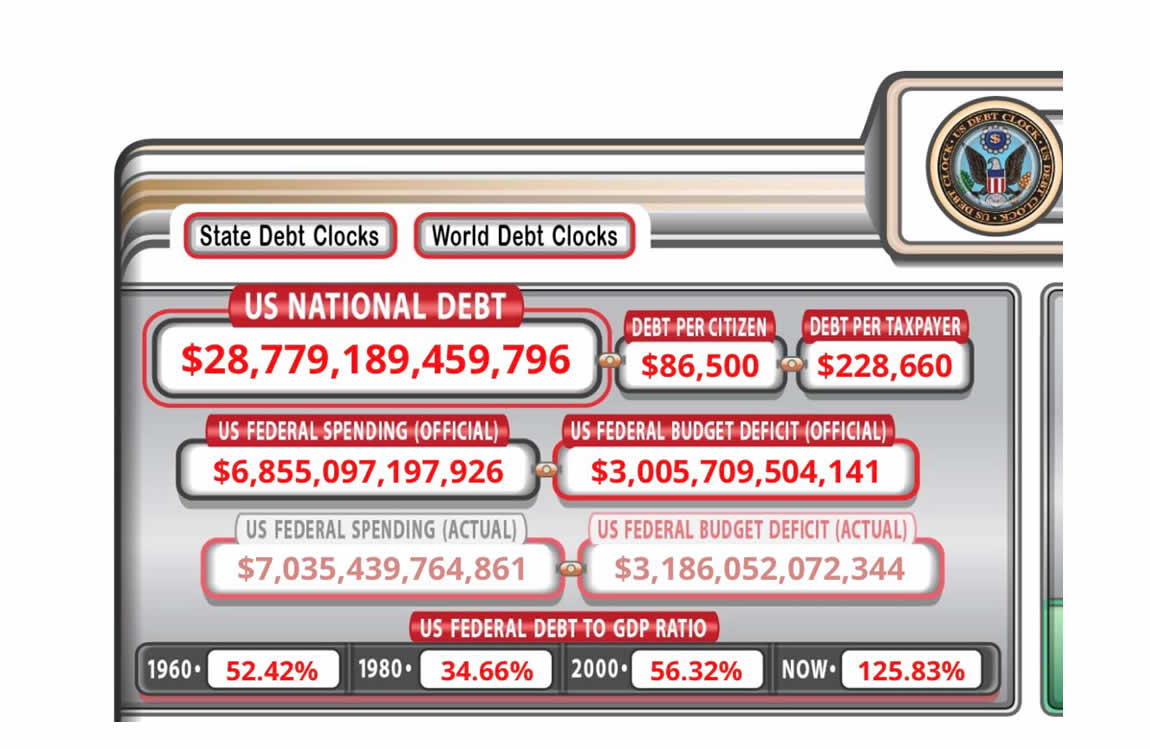 As the US is nearing all time highs in debt to GDP ratios, similar to the early 1940’s, WWII era.  We are again, coming to the end of a debt cycle.  These last 80 to 90 years.  This is the fourth turning.  The first three were the revolutionary war, the civil war, and WWII.  As we have said before, this cycle may or may not end in war.  We are here to discuss the global macro picuture not politics.  The fiat monetary system has led many nations to very high debt to GDP ratios.  In the US, hidden inflation has led to massive wealth inequality as demonstrated in the next two charts:

Wealth inequality set the US up for other issues more in the cultural and social realm.  The bottom line is, this inequality can be summed up in charts like this one: 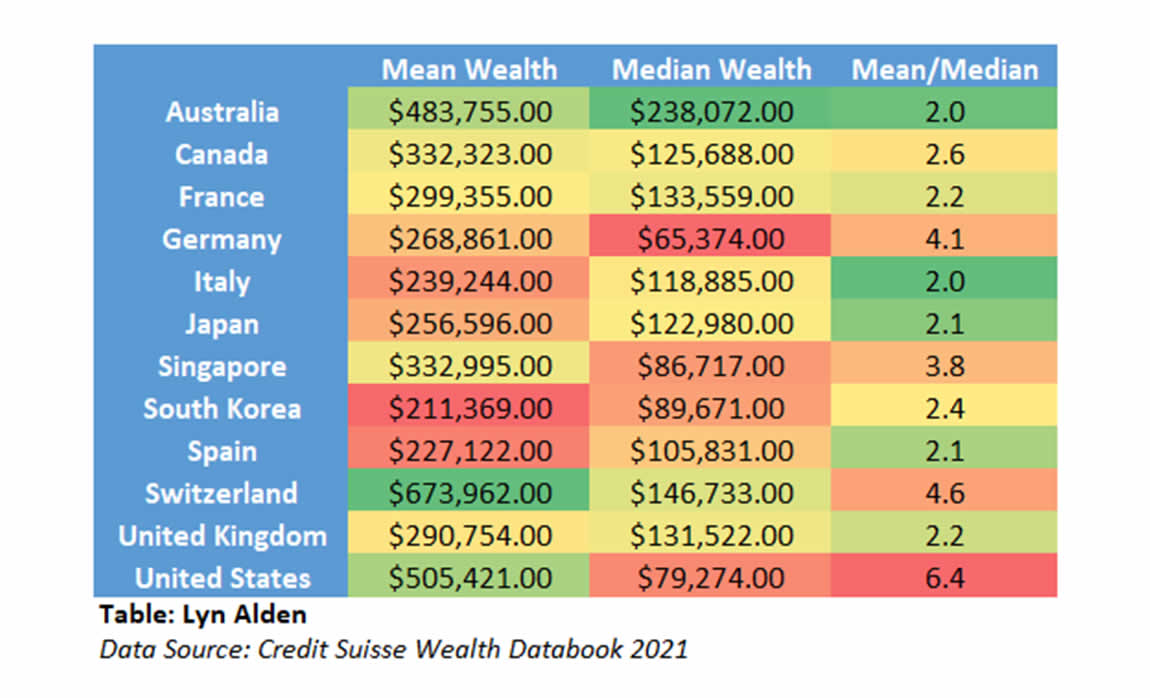 Thanks to Lyn Alden for these two charts.  With a mean median ratio of 6.4.  The US has the highest levels of wealth in the world.  This is because those are the owners of most real estate, and other appreciating assets.  Bank reserves at major commercial banks are backing loans for stock buy backs, creating zombie companies on the stock indices.  Zombie companies are known to buy back there own stock, pump the price, give large bonuses to the executives and board members, then do it again.  Bank reserves come straight from the TGA (treasury general account).  Since the US dollar has global reserve currency status, these things are possible here in the US, and not in other countries.

This led to the mortgage backed securities, banking crisis in 2008-2009.  The stock market fell 57% then.  We see China Evergrande as another Lehman type catalyst.  However, the CCP will likely sell off China Evergrande in pieces to other real estate companies to lessen the blow.  It still points to the likleyhood of a deflationary crash after the one year of inflation from spring 2020 to spring 2021.  It is no coincidence that Bitcoin found it’s ATH in April 2021.  It has been choppy and trading sideways since it fell from that lofty perch in April.  Why is the set up more for a deflationary crash then just more inflation, stagflation.  The China Sovereign risk is one reason: 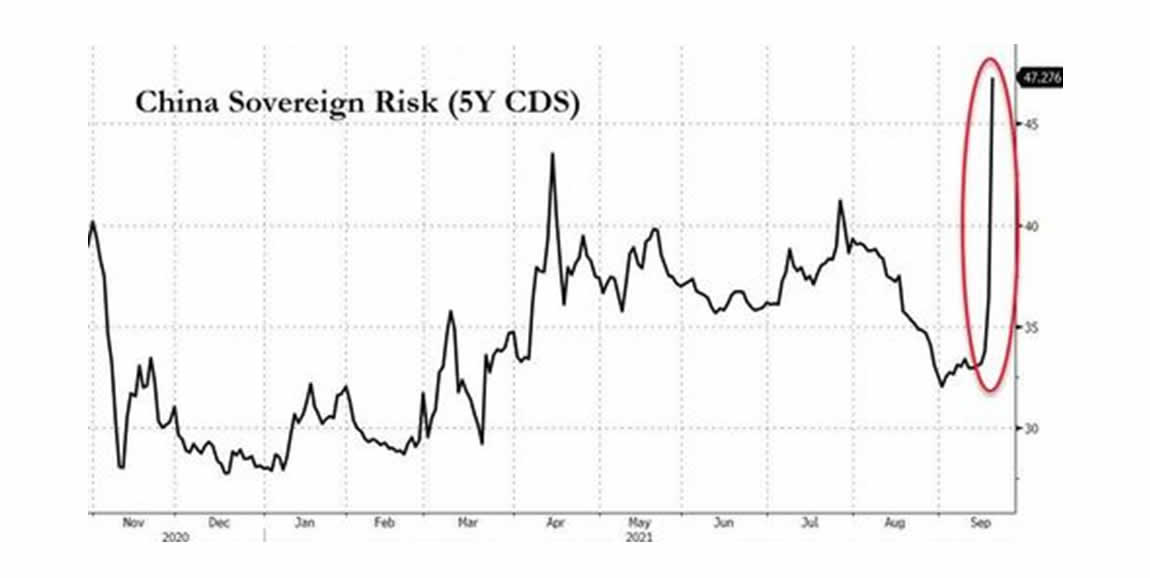 China Evergrande will likely cause a cascade of selling in the stock markets this week, and we have to take a wait and see approach to how it will impact Bitcoin short term.  It is not good, if your objective.  For this week perhaps.  Bitcoin already breached the $44K support level it needed to hold.  In the chart below we see Bitcoin typically reverts to trending with the S&P500 when it crashes.  This is temporary but we need to be prepared for more red on the charts this week!  There is very strong support around $32,500.  Hopefully, we don’t need it.  This week is set up for a great buying zone at cheap prices.  This chart below shows that.  It also shows how S&P 500 dips bring down Bitcoin with it.  But not for very long.  Notice the red wicks down, then straight back up: 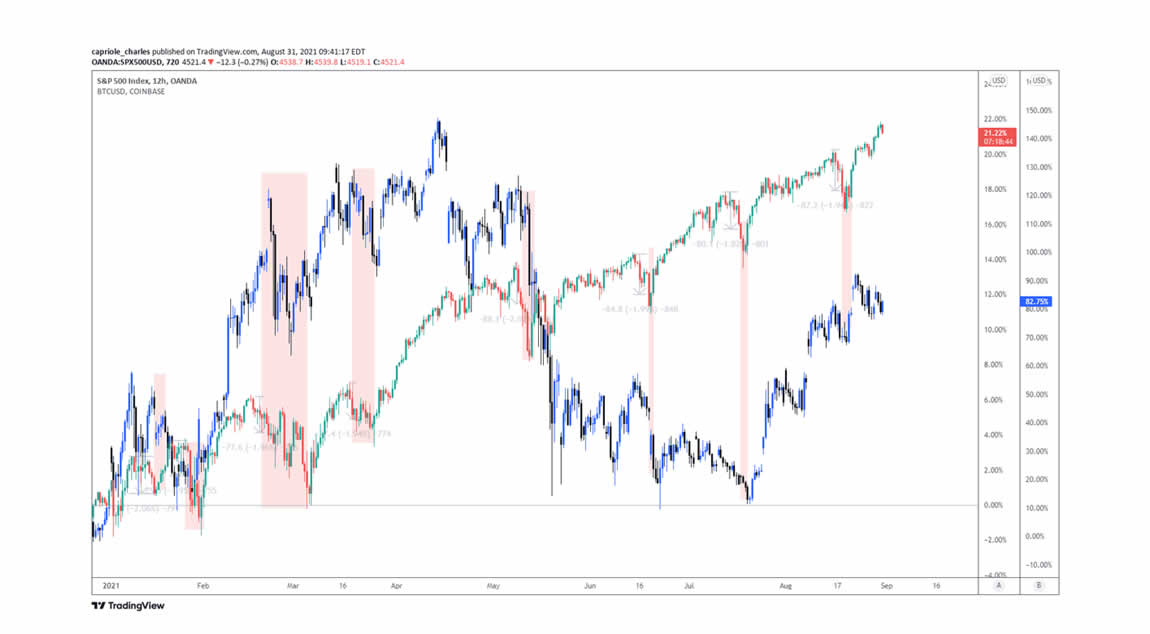 S&P 500 is in blue on the above chart.  Now see the final chart, in log format.  This dip is insignificant for Bitcoin and should be used as an opportunity to buy more at cheap prices: 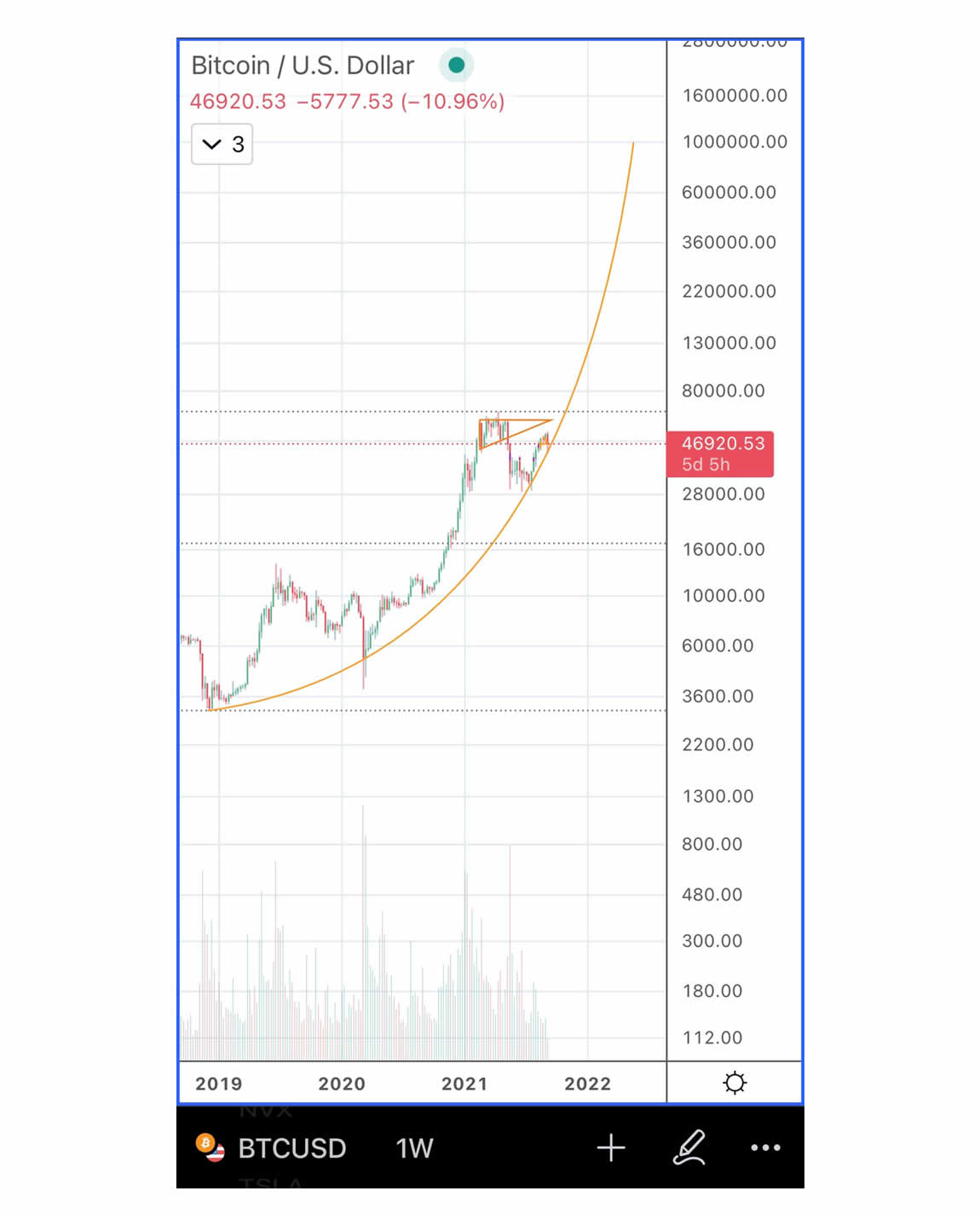 Bitcoin is still sovereign.  It is sovereign from the Fed, Central Banks, market manipulation.  Miners and nodes control Bitcoin on the Blockchain.  Every 10 minutes another block is produced.  Every 210,000 blocks, the miner reward is cut in half.  Every 4 years a supply shock ensues after the halving.  It takes 18 to 24 months to play out.  This bull run is not going anywhere.  All the reasons to own Bitcoin are in play at the global macro level.  We all must short the bankers, stay sovereign, decentralized, and ride the network effect.   It takes the price parabolic when supply cannot meet demand.  If stocks do crash over the next few weeks, eventually, this will push scared money into Bitcoin.  The network effect demands that.  How?  Supply is lower because old coins are not being sold.  See this chart proving how every dip is being bought up, anticipating this supply shock and higher prices: 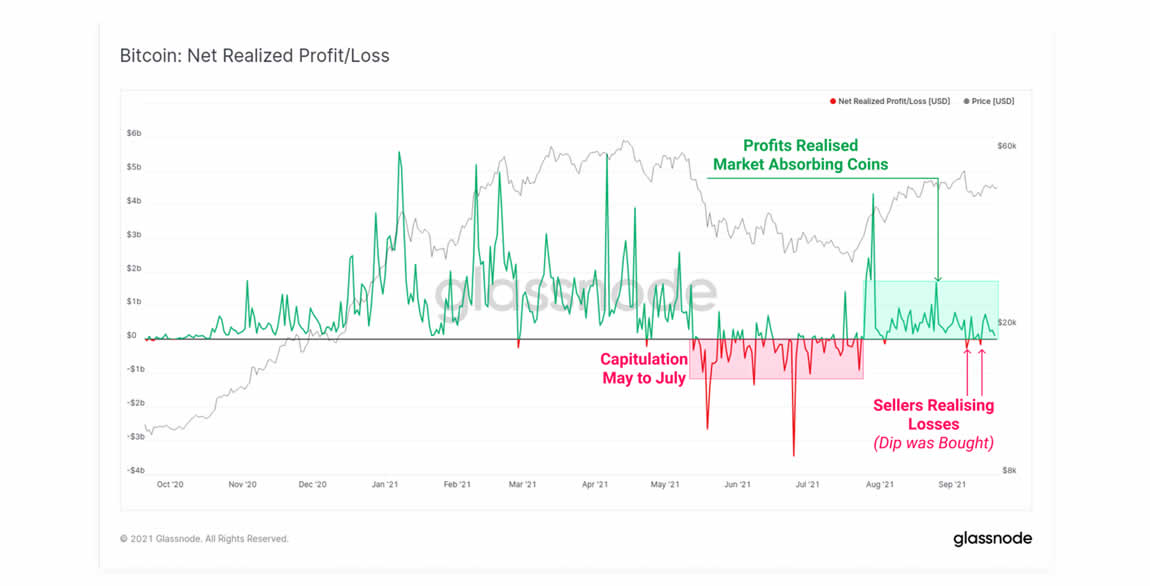 If the relative strength index of Bitcoin (green line in above chart), drops below the horizontal line, then breaks above it later on.  Probably in October sometime, but it could be November.  Bitcoin will trend up quickly.  Fear of missing out (FOMO), brings in higher demand, makes the price go up, which brings in higher demand.  A feed back loop.  It’s actually called Moore’s Law, or the network effect.  We have not seen it kick in yet, but when it does!  Fireworks!  We have been calling for this, and know it will eventually happen.  Everything is set up for the 2021 bull run to mimic the 2013 bull run with a double top.  A deflationary real estate and stock market crash should only strengthen Bitcoin’s position with the network effect.  Scared money looking for a home away from the banking sector.  That’s Bitcoin.  It’s rules based, other than FOMO, and Whales shorting Bitcoin, manipulation is very limited in this market.  It does happen, and we have seen that especially from the large banks.  However, once the network effect takes over (when the RSI breaks above 56 after dropping below 20).  That will effect FOMO, demand, which brings up the price and the feedback loop begins.  It happened in 2011, 2013, 2017 and it is in the process of gearing up to happen in 2021.  It could last into 2022 for a short time.  Be ready.  Buy this dip!!