return to the blog
Today’s will be a special blog!  We hope you enjoy it. Below is a long term chart of Bitcoin showing the sweeping bear, re-accumulation, then bull markets in between each halving.  These cycles are exactly 210,000 blocks apart.  Every block gets added to the blockchain in 10 minutes time, plus or minus a few seconds: 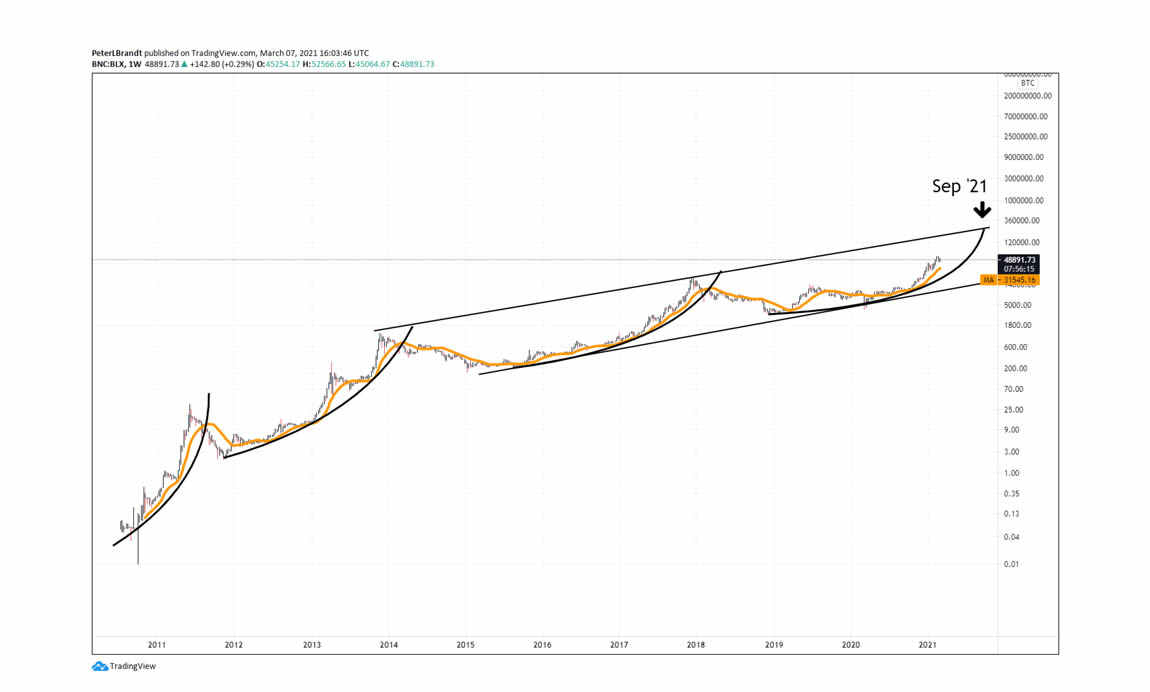 Therefore, Bitcoin is extremely time sensitive.  Time and money are the two most valuable commodities on planet Earth!  Bitcoin conserves and expands on both of them.  What else (technology wise) can do that?  Does the internet?  Does electric cars?  No, only Bitcoin.  It is a savings technology based on coding blocks on a blockchain every ten minutes like clockwork.  In 12 years nothing has EVER disrupted that timing.  Nothing, ever!
You know what else?  Bitcoin does not sleep.  It runs 24/7/365 unlike all other markets.  Again, it’s timing cannot be interrupted, EVER.  So by conserving your time and your money, due to deflationary charactoristics it has.  Bitcoin runs in predictable patterns.  Many do not understand these patterns.  They are based on the time it takes to mine a block of Bitcoin.  So applying investing fundementals if 100% futile!  You cannot.  Bitcoin lays down blocks on a blockchain every 10 minutes, tik, tok!  If you can understand that you can understand that Bitcoin has already defeated every other asset to invest in.  Gold, stocks, even real estate.  No asset holds it’s value priced in Bitcoin.
Now let’s look at the 3 cycles of HODL waves.  Study this chart below.  The 2020-2021 bull run is in cycle 1.  Two more to go.  Since Bitcoin is blocks mined on a blockchain systematically, every 10 minutes.  It builds rythms which do not comply with investment the thesis of traditional stock investments.  Hold Bitcoin through two or three HODL wave cycles, and your good for life!  Study this chart below, remember, we are in cycle 1 right now: 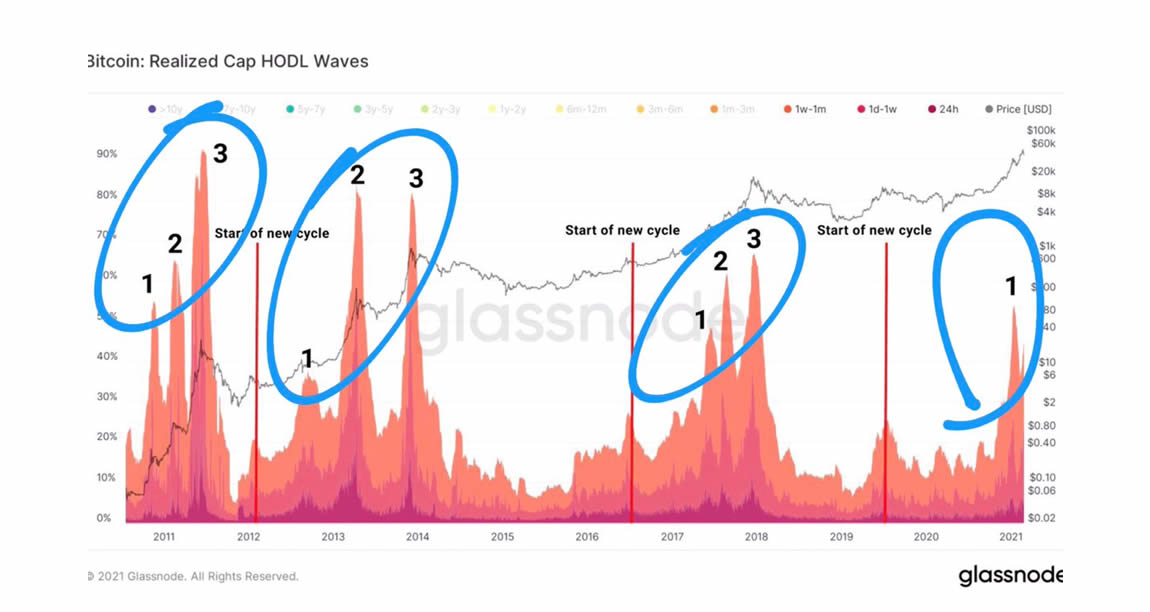 NYDIG just announced today that life, annuity, and property & casualty insurers now own, in aggregate, more than $1 billion of direct and indirect bitcoin exposure facilitated exclusively by NYDIG, and held on NYDIG's secure, audited, and insured institutional custody platform. NYDIG also had a $200 Million capital raise to invest in Bitcoin.  Here is the article of NYDIG discussing this investment, click here to read.
Kjell Inge Roekke founder and CEO of Aker and Seetee put all of his companies treasury into Bitcoin.  They are the first company in Scandanavia to do that.  We will let him speak for himself:
“After forty years in business, I have learned that you always have to keep an eye out for new opportunities and developments on the horizon. Seetee marks that horizon. It positions itself in the middle of an industry that could define the next several decades, much like the internet has done since the early 1990s. Seetee is an open invitation to push, pull, and poke life as we know it. To act like young entrepreneurs every day.”
“Risk is not an obvious concept. What’s commonly considered risky is frequently not. And vice versa. We are used to thinking that cash is risk free. But it’s not. It’s implicitly taxed by inflation at a small rate every year. It adds up. Central bankers have magically agreed that they should target two percent inflation, which implies that one third of your money’s worth is taxed away every twenty years.
If it was three percent, almost half of it would be gone in that time. Now you should ask, why is it two, and not one or three? What’s special about two percent? The Federal Reserve has recently said it will target an aver-age rate of two percent over time, which implies they will allow inflation to run above the target for some years. Inflation is very good for debtors. And the U.S. is the world’s largest debtor. They owe the bond owners. And they owe pensions. Both groups may be out of luck in the long term.”
“I respond to today’s challenges as I would when I was a young man. I will always prefer to be a focused entrepreneur rather than a diversified investor, albeit with a tad bit more risk management and infinitely more academic rigor around me than I had earlier in my career. One of my favorite questions to people who ask me about the risk that’s inherent to our ideas: What about the risk of losing out on the upside? Young professionals know they are risking their careers if they say yes to what eventually becomes bad investments. That’s the name of the game. What you should really get fired for is saying no and losing out to once in a life-time opportunities.
Bitcoin may still go to zero. But it can also become the core of a new monetary architecture. If so, one bitcoin may be worth millions of dollars. The asymmetry is i-teresting to a portfolio. People who know the most about bitcoin believe its future success is nearly in-evitable. Whereas the other camp thinks that its failure is equally certain. Status quo is not possible. In the past months I have met many new people. One of them was Jack Mallers at Strike. He’s almost forty years younger than me. Experiencing his energy and enthusiasm was special. I felt old in his company, but also very emboldened: I lost out on mobile communications. I didn’t in-vest in internet companies. It was only recently that I started to invest in and build software companies (and I love it!) When I realized how much brainpower goes into Bitcoin, I saw the future in the making.”
So, ask yourself this question.  As central banks all over the world print, and print, and print currency.  What does that do to the buying power of these currencies?  Think of Venezuela, Argentina, Greece, Lebanon, Africa.  Everywhere where currency printing has led to hyperinflation.  Bitcoin’s blocks mined every 10 minutes is significant.  Because after 210,000 blocks, the block reward for the miner that mined that particular block.  It is cut in half.  So every 210,000 blocks that are mined, the Bitcoin supply is cut in half.  Bitcoin is borderless, permissionless, and it’s protocol cannot be changed.  As every currency is inflated to zero value worldwide, Bitcoin gets more and more scarce.  Don’t believe me?  Here is what things cost in 1971, the year President Nixon took the US off the Gold standard: 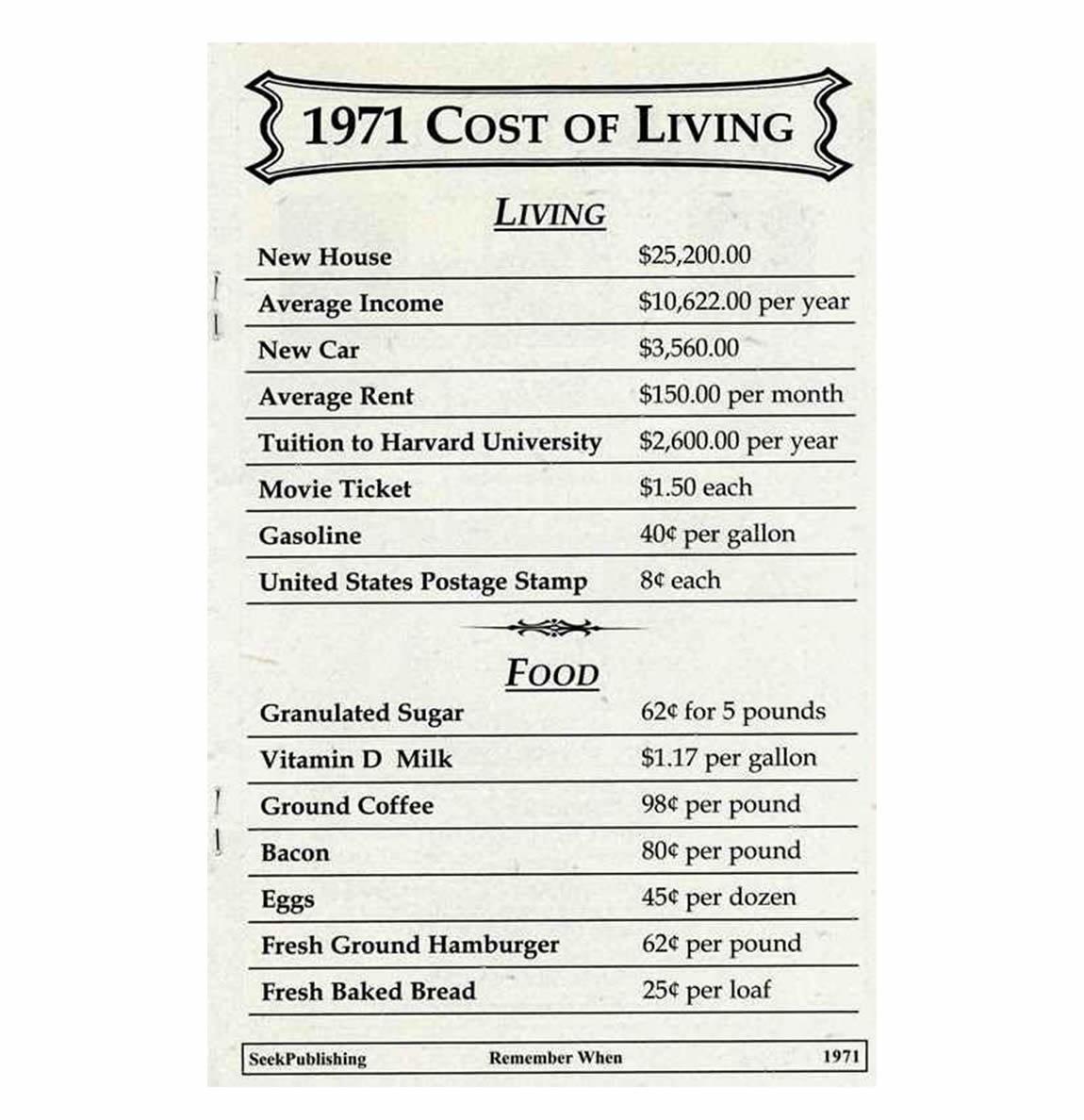 Neutral ATM buys and sells Bitcoin as little as $20 at a time!  You do NOT have to buy an entire Bitcoin. Neutral ATM is here to get everyone off of zero Bitcoin.
Give Neutral ATM a try.  We have low rates, convenient locations and we are expanding. Contact Neutral ATM, we will answer all your questions about Bitcoin and using our ATM machines. Find a Neutral ATM Bitcoin machine location near you.