Bitcoin Spits In The Face Of FUD!

Bitcoin is up to 400 obituaries written in print since 2009 when Bitcoin started.  Why is main stream media so quick to write off Bitcoin?  Before we answer that, here are the 400 written obituaries for Bitcoin, click here to read.

Bitcoin is a hedge against fiat currency.  However, unlike past cycles where Bitcoin had a bull run after the halving.  This one is different.  Hundreds of companies, , credit card companies, institutional investors, hedge funds have adopted Bitcoin onto their balance sheets.  As of last night, El Salvador has voted Bitcoin a legal tender.  Many other countries are getting interested in the freedom Bitcoin presents.  8 ETF’s are waiting for approval in the US and many more in other countries.  Canado already has approved Bitcoin ETF’s.  Why such interest?  The lightening network which allows transactions to take place across borders instantaneously.  The lightening network and the work Strike has been doing to make this a reality has brought about payment rails for Bitcoin transactions.  Bitcoin used to be too slow.  Using the lightening network solves this without going away from Bitcoin and the blockchain.  That is what Bitcoin Cash tried to do in 2017.  That did not work.  Now Bitcoin is so fast, and the blockchain has proven itself in terms of it’s security, that El Salvador just voted it a legal tender! 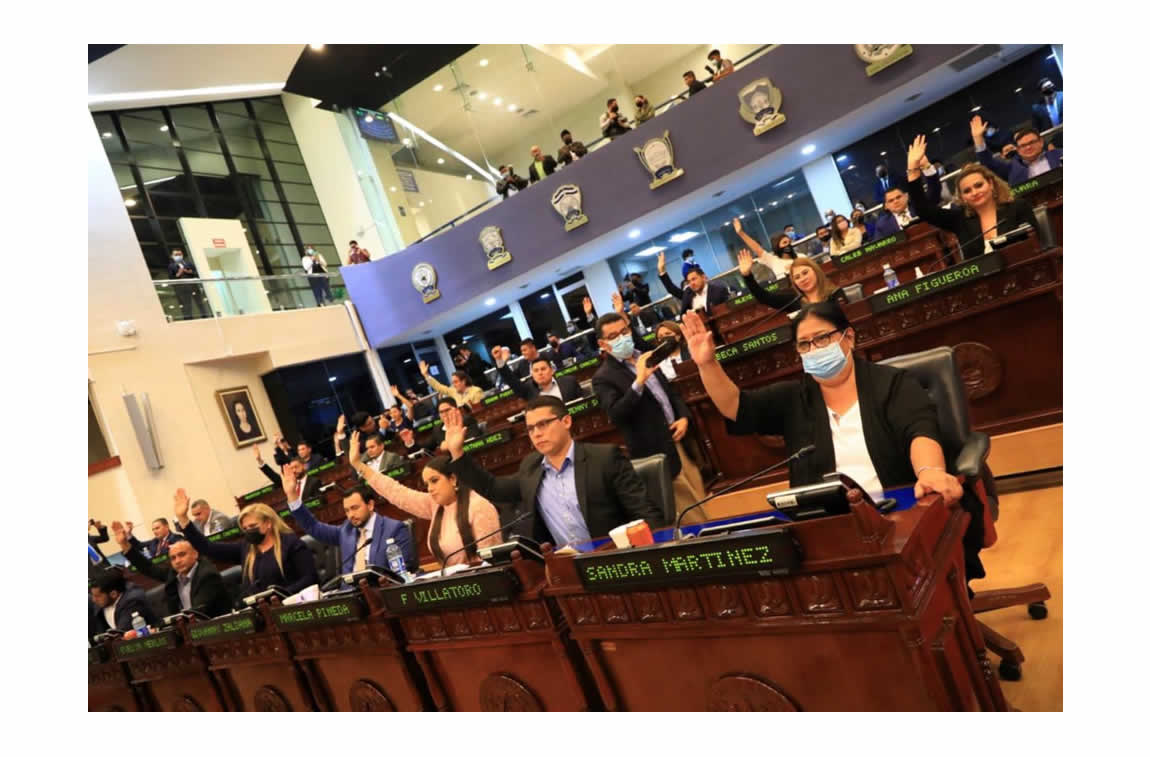 Above is the vote last night, June 8th, in El Salvador voting unanimously to make Bitcoin a legal tender.  Historic!  Now Panama, Tonga, Nicaragua, Mexico, Brazil, Argentina, Paraguay have varying degrees of interest into exploring passing laws like El Salvador did.  Neutral ATM is firmly in the camp that central banks, not political parties, are the root cause of economic inequality globally.  This is the cause worth fighting for. We believe in this so much we want more Bitcoin ATM’s faster than ever.  It allows adoption and brings economic equality.  Yet it requires education to get that equality.  People have to understand what Bitcoin really means.  It means a central authority cannot create inflation and the government they loan money to and therefore control, cannot tax the citizens into poverty.  Loaning money to governments, financing wars on both sides, financing the drug trade, sex trafficking, pedophilia.  Bitcoin is simply a peer to peer monetary system that takes any central authority out of the way.  No middle man.  Sound money.  Deflationary money with a capped supply at 21 million coins.  Remember, a Satoshi is 1/100 millionth of 1 Bitcoin.  So, again, why does the main stream media write off Bitcoin whenever the price dips a little?  They are owned by private central banking families.  That is the answer.  Most media is owned this way.  It takes research but the answers are out there.  Bitcoin is a way around this system which is very, very corrupt.  Don’t believe us?  Here is a good one.  Blackrock, the largest institutional investor in the world is buying 130K to 170K homes per year in the US, paying 20% to 50% over asking price in some cases to turn these middle class homes into SPR’s.  Single Family Rentals.  Central bank money is buying up US homes to make them rental properties!  Wow. 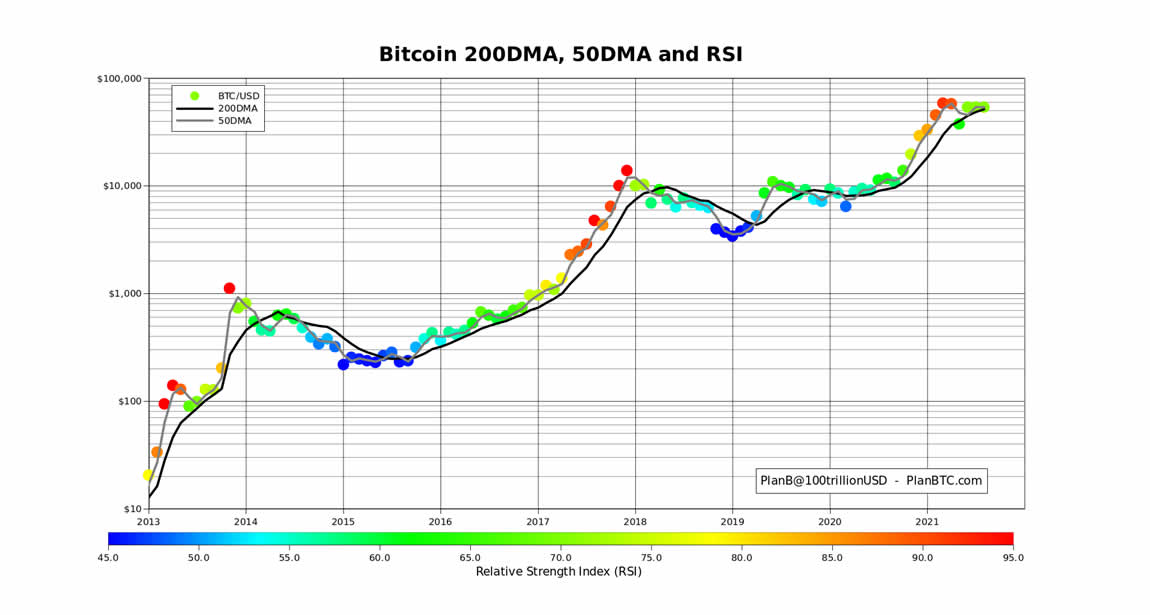 We have been consistent in our belief that this bull run is NOT over and price action right now is trending along the 50 day moving average and just above it, as it trends upwards.  Bitcoin is still creating higher lows in the short term.  Therefore, Bitcoin has a trajectory much like the 2013 bull run.  At that time, Bitcoin hit a top just under $200, then dipped to well under $100.  It trended up towards $160 over 4 months.  Then, it catapulted up to $1,100 at the end of 2013.  This bull run may not match the returns of that bull run.  That is not likely.  Bitcoin is too mature now.  However, a re-accumulation until July or August seems likely.  It could happen sooner, it looked that way last week but the price action has now cooled off.  Raoul Pal has again brought up an excellent point.  He tweeted this chart below of the average net worth of home owners.  It is plummeting with the value of the dollar: 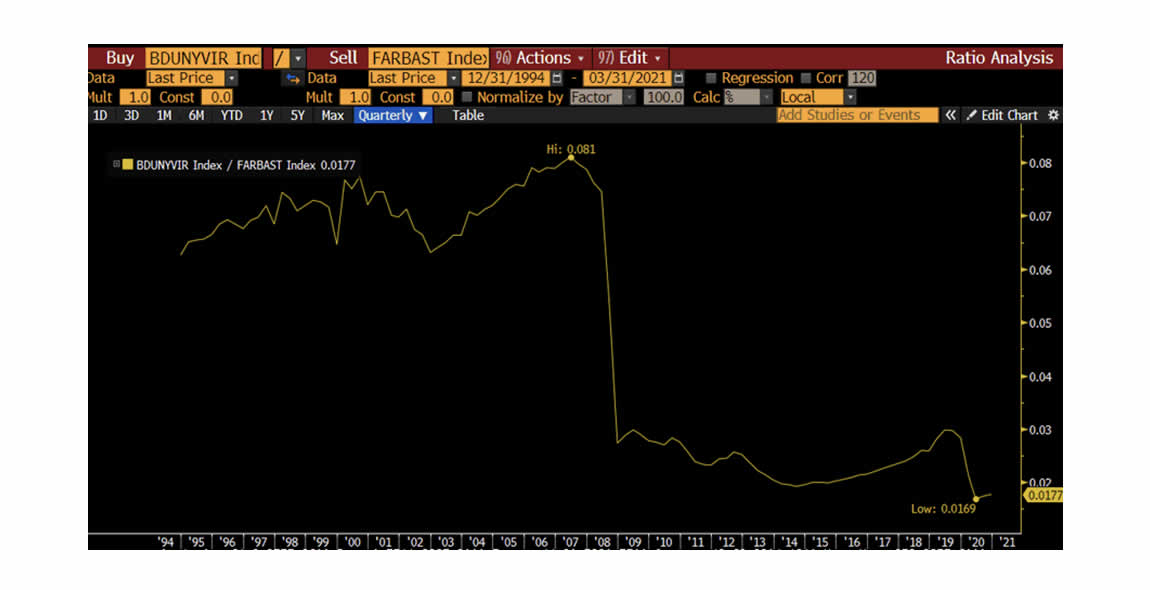 Obviously, our answer is that Bitcoin fixes this.  It does, but most people don’t want to engage in that much research.  William Clement tweeted this chart out yesterday with total transfer volume from exchanges moving up.  That means that 30,000 Bitcoins have moved off the exchanges this week and back in to cold storage, offline wallets.  That is a bullish sign, if it continues: 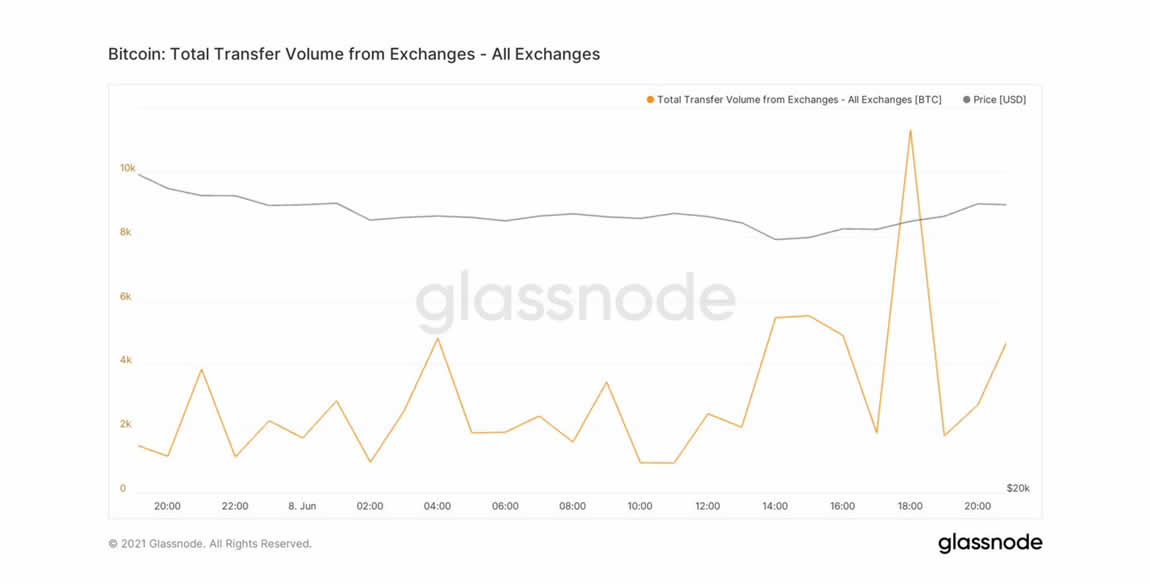 The other big catalyst for Bitcoin adoption and the network effect in 2021, has been money supply growth.  This has been stimulated by the corona virus last year, and subsequent money printing and quantitative easing by the US Fed.  Since there is no bottom to how far the USD can fall, there is no top to how high the value of Bitcoin can go.  Here is the national debt on a logarithmic chart.  It has gone increasingly parabolic since President Nixon took the US off of the gold standard in 1971.  That is the arrow on the chart below: 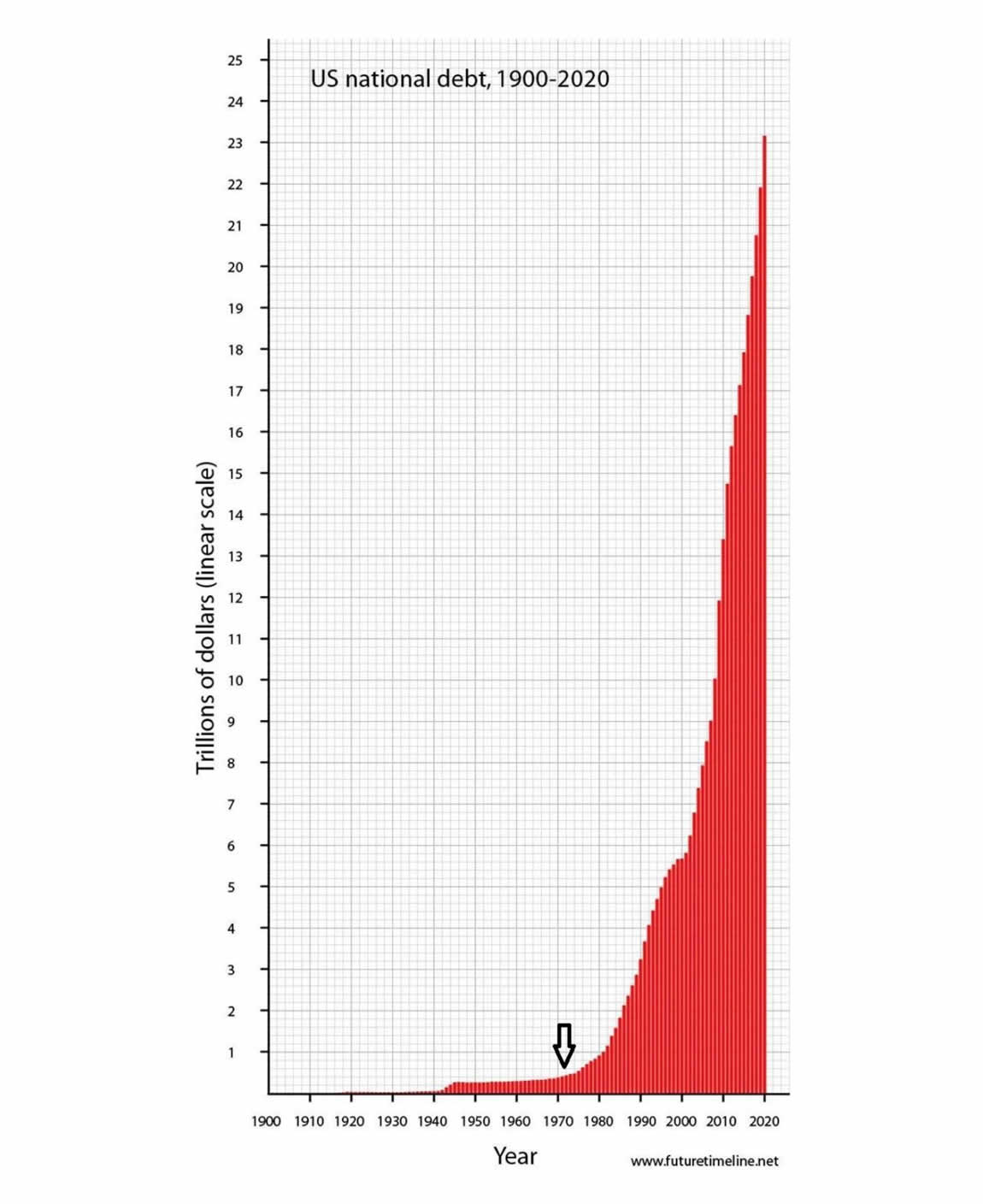 As a reference here is the all time price chart for Bitcoin.  As the dollar loses value in buying power terms, Bitcoin creates more demand and the price rises.  Higher highs, higher lows.  The network effect.  That will start to kick in soon and once again, Bitcoin will make a parabolic move up.  Here is the alltime Bitcoin price chart: 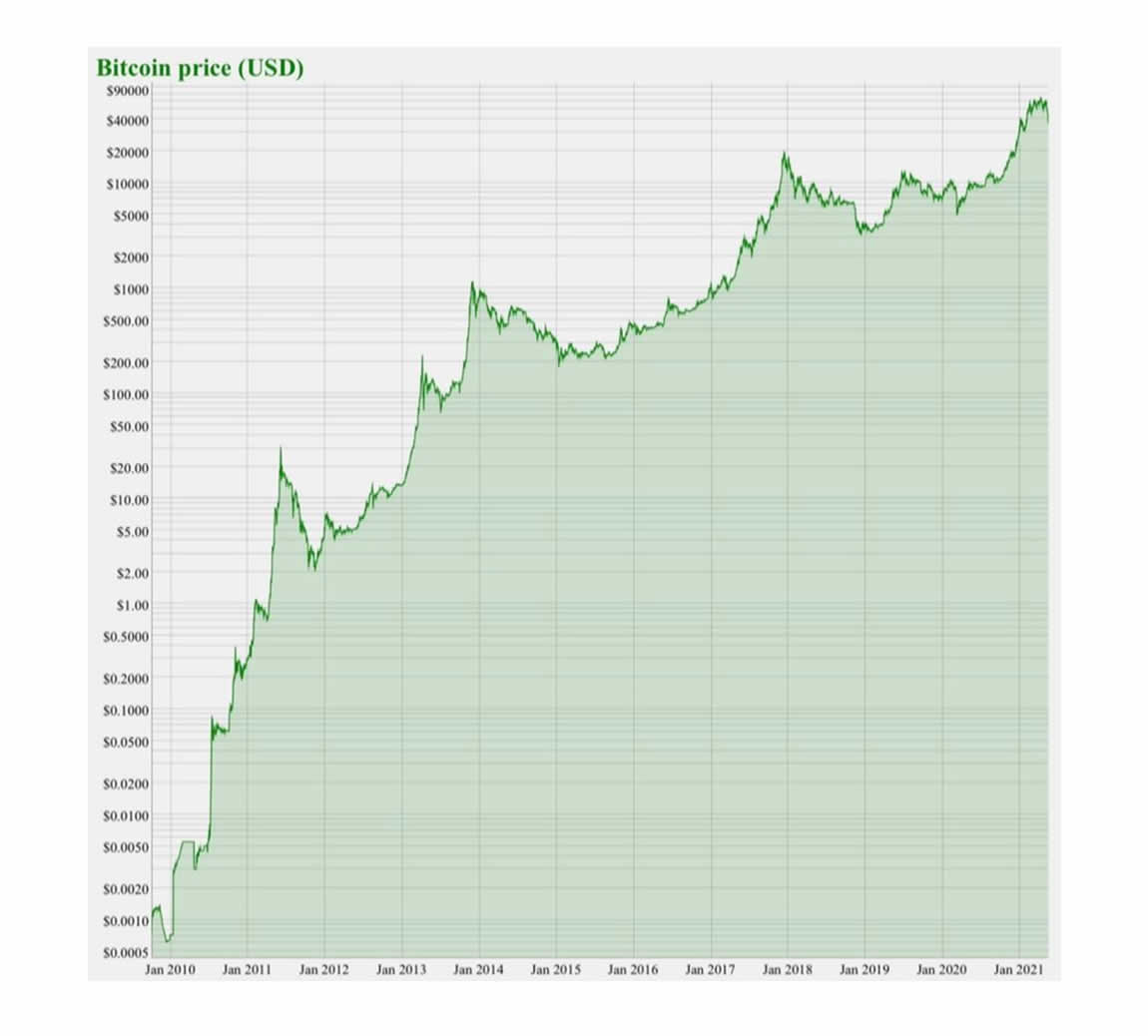 Bitcoin is up 9% today so far, due to the El Salvador news.  Fiat currency is dying.  Slowly, but it is dying off.  Central bank digital currencies likely are not going to take hold like Bitcoin, because they are centralized.  Controlled by a central bank authority.  People want freedom.  It remains to be seen if Bitcoin will climb to the top of that hill.  Global reserve currency status, that the USD enjoys now.  Neutral ATM sees that as possible, but we don’t know when.  Get out your popcorn.  It is going to be a historic and interesting time, these next 5-10 years!  Until then, keep buying Bitcoin and holding it long term.