“Bitcoin is a solution, in search of a problem”, Stanley Drunkenmiller

What happened during coronavirus lockdowns in 2020?  The market shut down, and the Fed printed money until January of 2022.  This threw off the relationship between the bond market and the stock market.  Bonds have crashed.  The Fed will eventually have to be bailed out by the treasury, as it did in 2020.  This is a good reason why banks have such a visceral reaction to Bitcoin, as an investment outside the monetary system.  Case in point, click here to read.

How will younger generations afford a home now?

Mark Moss said this about the monetary system and what is coming next if we cannot stop it.  He is referring to CBDC:

“We either win, and we’re free or we lose, and we’re in slavery for the rest of humanity”

Michael Burry of the The Big Short movie about his investing prowess, said this about the direction the Fed will have to take in the near future:

So, this would emulate the decade of the 70’s, that is what Michael Burry is saying.  He is right about that.  Except the Fed cannot raise rates as Paul Volker did in the late 70’s and early 80’s.  Notice in this next chart the trend that inflation (blue line) rose and fell.  The red line which is the fed funds rate, peaks and then falls, before inflation drops.  Could this happen over this decade of the 2020’s?  Yes, but the Fed cannot get rates up to 20% like 1980.  That is no longer possible due to the $31.5 trillion in national debt the US has.  Here is the chart below:

Although the Bitcoin price has been in a falling wedge pattern since November 2021, that cooresponds to the time when the Fed began hawkish rhetoric, regarding raising rates.  We also now know about the $8 billion fraud that FTX was engaging in, which diluted the amount of Bitcoin in the market.  Remember, FTX sold thousands of Bitcoin that they did not have.  So the double top ended much lower than we thought it would that November 2021.  Now, 14 months has passed, and the price has risen outside of this falling wedge pattern, and closed a weekly candle above it!:

This next chart is the monthly candle and shows a possible continuation of the bull run Bitcoin was on in 2021 when the price was cut short of it’s goals.  We are not saying price will surpass the all time high of $69K really soon, and then eclipse $150K.  That IS what this chart shows, and it’s worth a note: 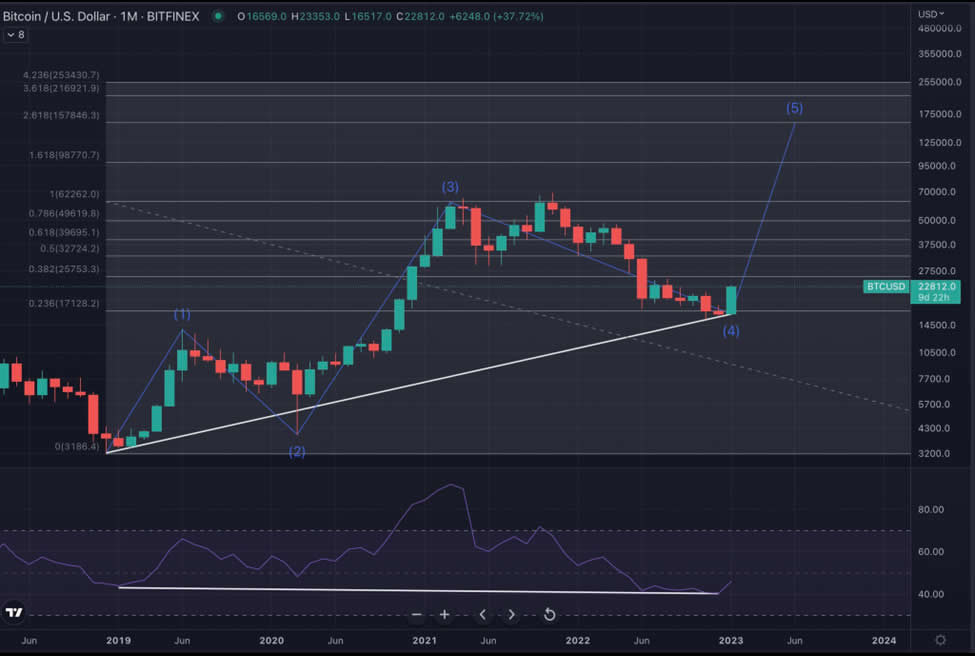 We think that Fed monetary policy will be the catalyst.  We expect a modest 25 bps rate hike in mid February.  From there it could pause and go negative.  That is the Fed’s history!  They say one thing, yet do another.  How likely is it that the Fed will just keep raising rates the entire year 2023?  Although Tom Luongo espouses this, and has good reasons.  Whether he is right or not will likely determine how good 2023 will be.

Neutral ATM sells Bitcoin at our ATM machines, and echoes the narrative of buying and holding Bitcoin offline.  We do not trade Bitcoin.  Bill Miller does not either, between him and Stanley Drunkenmiller, Alan Howard, Ray Dalio, Steve Cohen, and Louis Bacon they are all long term holders of Bitcoin.  They are all world class hedge fund managers as well.  It has vastly outperformed Gold and Silver as an inflation hedge.  Yet as digital gold, Bitcoin simply has more scarcity, and fungibility than Gold or Silver ever will.  Plus it is not as easy to manipulate.  Here is a video of Bill Miller explaining his 50% plus net worth invested in Bitcoin:

We are not financial advisors and this is not financial advise.  Hold Bitcoin LONGTERM, keep it OFFLINE.  This transition in the monetary system will smile on this decentralized, scarce, digital asset.  It will reign supreme as it has since 2009.  No crypto currency outside of Bitcoin, has this decentralization, built into it’s proof of work blockchain as Bitcoin does.  As we say often, millions of miners and node operators in over 200 countries control the Bitcoin protocol.  This protocol cannot be simply changed (ie. Add more Bitcoin than 21 million, to the protocol).  Once the 21 million Bitcoin are mined, no more will be mined, ever.  Bitcoin is the wealth transfer technology of the 21st century, and until another asset comes along, and changes that.  It will remain to be true.