return to the blog
Yesterday we showed some commodities that had very high inflation.  However, Lumber has now dropped in it’s inflation number since 4 to 8 weeks ago.  This US producer price index appears to be a good barometer to show.  7.8% inflation, IN JULY!  Annualized that would be 93% inflation per year.  Grave danger for the US to fall into hyperinflation sooner than expected if the out of control spending, does not stop now: 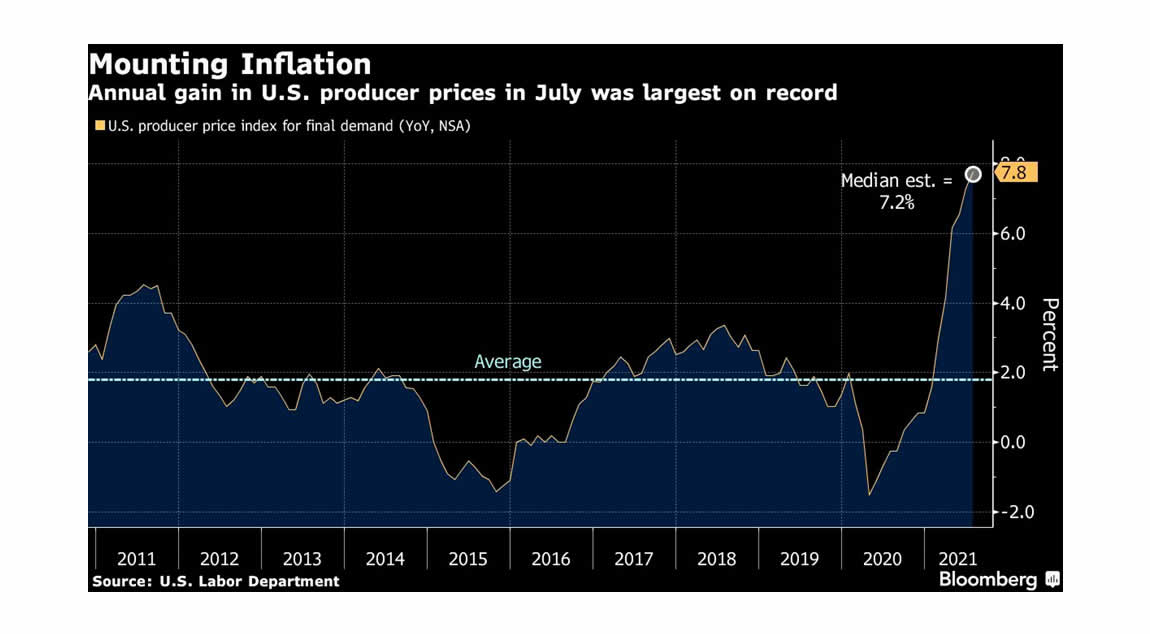 These next two tweets involve inflation for micro goods and services, click here to view on twitter. The second tweet involves macro indexes, click here to view on twitter.
The CPI is rubbish, ignore that index.  5.4% is higher than early 2021, when it was only 1.4% but that index is NOT real inflation.  Too many Americans and Europeans do not understand inflation, and how damaging it is to generations in a family.  This is why we write this blog!
If inflation is 12% to 15% for 2021, and it climbs to 30% + in 2022, and goes on from there.  The USD will crash far sooner than anyone, including us, expected!  What about the stock market?  Look at these P/E ratios.  38.54 is a historic level.  The 1929 crash that over 3.5 years, wiped out 90% of the stock market was at a 30 P/E ratio average.  The 2000 crash reached 44.  Once the P/E ratio surpasses 40, it that even happens, that is a flashing red warning of an eminent crash.  Historic:

If the SPX and NDX crash <50% this fall, we see a delayed reaction coorelating to furthering a Bitcoin pump.  The flight to safety will have to be out the risk curve, since inflation is so high.  Gold and Silver will be recipients of this.  However, Bitcoin and Ethereum will get the greatest benefit!  Since Bitcoin is scarce and decentralized, we choose Bitcoin over Ethereum.  We admit both are good investments right now.  We see Bitcoin as the long term winner, but Ethereum is’nt going to die in the near term either.
Below is a chart from Plan B on the last three bull markets.  The present one is in red.  Notice how it is tracking nicely with the 2013 bull run!  We do not see it getting to the price levels, via the exact same trajectory, as the 2013 bull market.  However, if this trajectory holds on, it could get incredibly parabolic!  The horizontal lines are the stock to flow target from 2019 in green, the stock to flow target from late 2020 in light green.  The update was based on this double top trajectory, based on the fall 2020 timeframe and information available then: 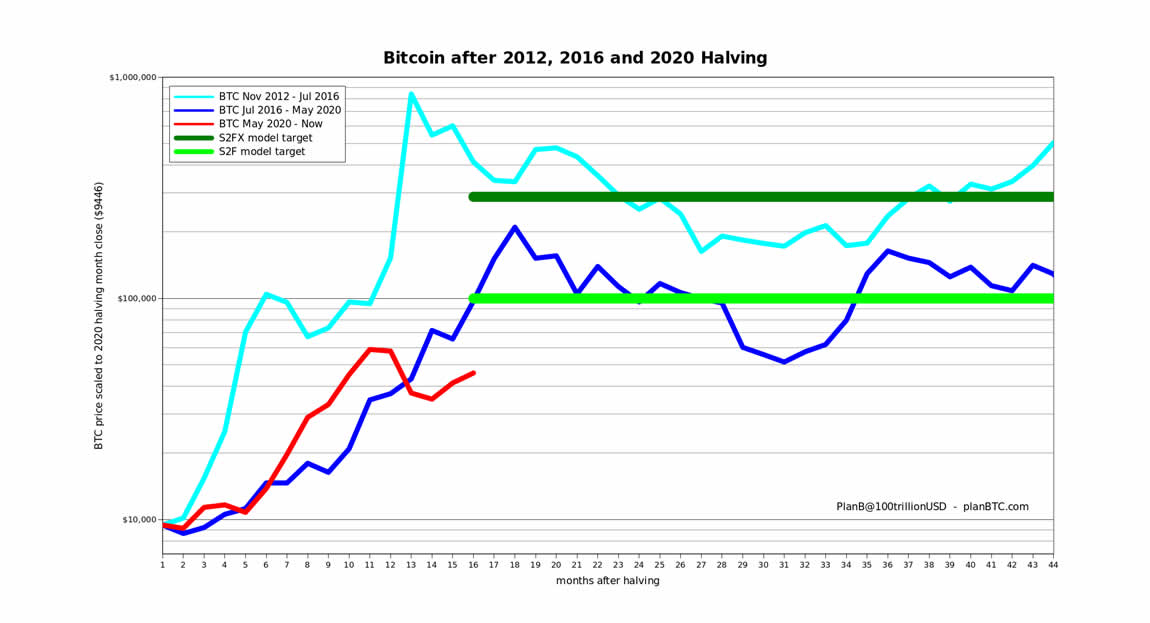 The next chart is the hash ribbon index which considers miner capitulation.  That is when all the levels of miners have experienced sell pressure.  There are 5 levels of miners, based on their financial strength.  Level 1 is the weakest, level 5 is the strongest.  Notice the blue and green lines on this chart.  When the 30 day moving average (green) crosses the 60 day moving average (blue), that is a golden cross.  From that point on, all 5 levels of miners have experienced maximum sell pressure.  Buying will be the next phase and holding or HODLing the Bitcoin coming from miners.  The parabolic moves in Bitcoin’s price always come from miners holding all of their Bitcoin as the price climbs violently: 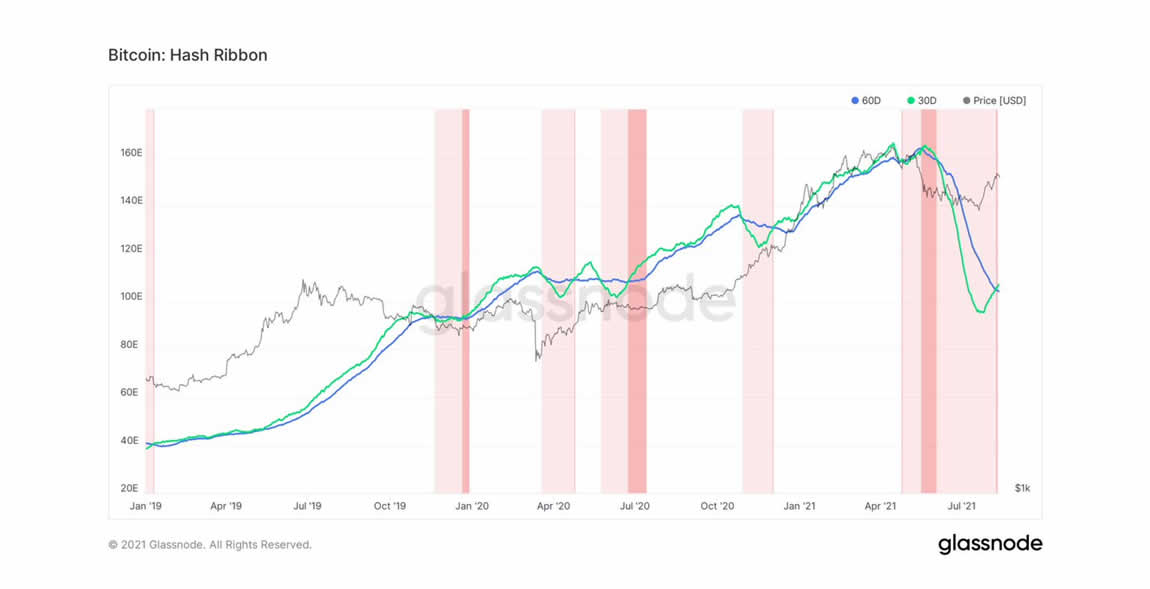 The next 6 months are going to be difficulty and extremely trying.  We see this coming.  Bitcoin is the lifeboat.  Allow it to lessen the blow.  Decentralize from the corrupt system.
Neutral ATM buys and sells Bitcoin as little as $20 at a time!  You do NOT have to buy an entire Bitcoin.  Neutral ATM is here to get everyone off of zero Bitcoin.
Give Neutral ATM a try.  We have low rates, convenient locations and we are expanding. Contact Neutral ATM, we will answer all your questions about Bitcoin and using our ATM machines. Find a Neutral ATM Bitcoin machine location near you.