Bitcoin Re-accumulation, but for How Long?

return to the blog
Bitcoin scarcity is manifesting itself in many ways.  One is demonstrated in this chart below.  Bitcoin exchange volumes are dropping off drastically, because hodlers are moving bitcoin to hot and cold storage wallets so as to save it (safe haven asset).

Previous blogs have detailed inflation which we know will only get worse if Biden becomes President of USA.  This inflation means the general population has to take on more and more debt because their dollars don’t go as far as years past.  Consumer debt is at all time highs in the US.  Yet Bitcoin outpaces inflation in a dramatic way.  So if a saver is saving in Bitcoin, they get out of debt.  Neutral ATM believes indebtidness is one of the biggest killers of the US economy.  Both for individuals and businesses.  Neutral ATM has no debt and never will.  We save only in Bitcoin and get paid only in Bitcoin.  See the tweet below from a frustrated Bitcoiner who is probably a homeowner, click here to see.
If you own Bitcoin you are outpacing inflation.  Bitcoin rose nearly 300% in 2020 and inflation was in the 11% to 15% range depending on where you live, click here to see.
All of this means that though we are in a re-accumulation period in the middle of a bull run, this re-accumulation will end at some point.  Neutral ATM believes it could last longer than many expect.  In to February or even late February.  However, it will break up, not down.  The next chart shows that the long view, from yearly candles shows the range we will be trading in, in 2021.  Neutral ATM has been saying $160K to $220K as the top but it could wick higher for a short time.  Here is the chart: 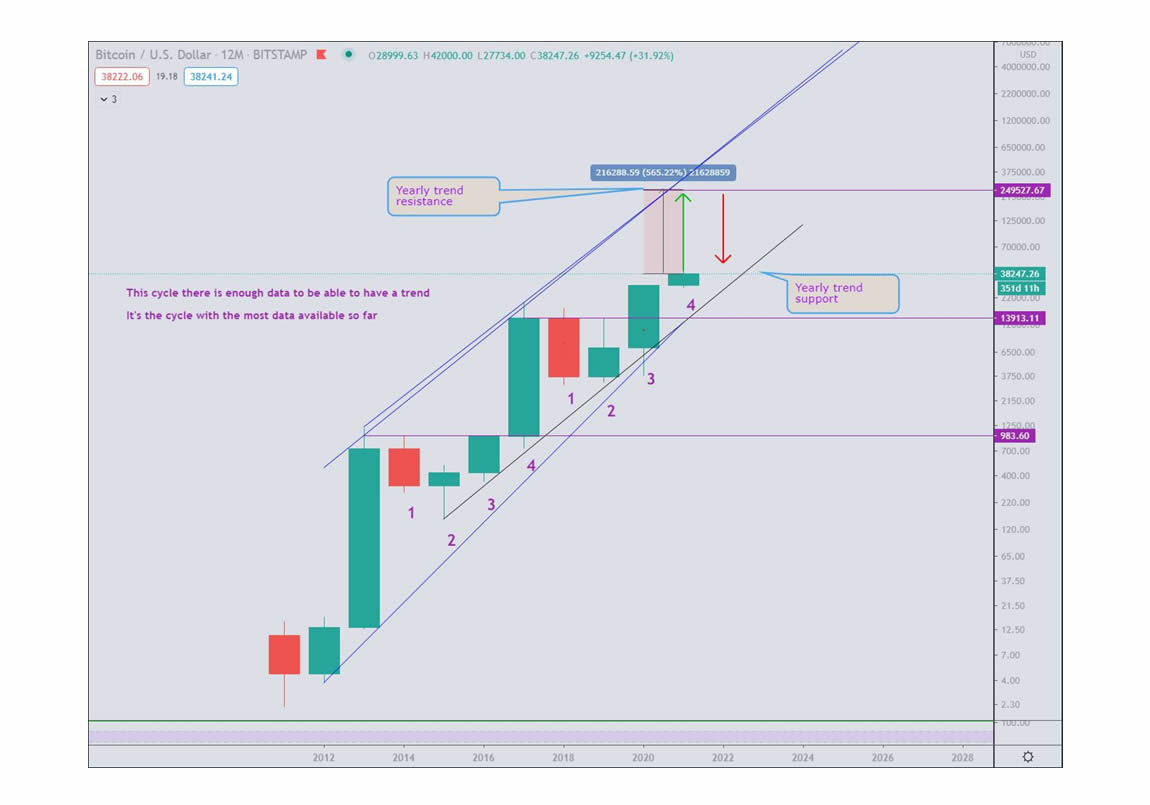 Based on the stock to flow chart from our blog earlier this week, it appears this re-accumulation period will last a few weeks.  However, when it breaks up it should be dramatic, especially if this current period takes us out to late February or later.  Neutral ATM likes these re-accumulation periods as it gets new adopters a chance to get Bitcoin exposure and hodlers like us a change to add to our position before Bitcoin really does moon!
Bullet point to remember:
Neutral ATM sells and buys Bitcoin as little as $20 at a time!  You do NOT have to buy an entire Bitcoin.  Neutral ATM is here to get everyone off of zero Bitcoin.
Give Neutral ATM a try.  We have low rates, convenient locations and we are expanding. Contact Neutral ATM, we will answer all your questions about Bitcoin and using our ATM machines. Find a Neutral ATM Bitcoin machine location near you.