All central banks are private.  10-12 banking families own all central banks.  When they have carte blanche to print currencies globally at each central bank.  They can tax citizens at will in many different ways.  They create debt through the banking system, create treasury bonds to influence interest rates.  They can raise them through the federal reserve, or they can lower them the same way.  When the Fed has to buy back bonds in order to keep rates low and stimulate more debt accumulation, it is keeping citizens poor with devalued currency which loses buying power over time.  Money printing year over year devalues currency.  The more bonds have to be repurchased to create bank reserves, this allows banks to loan out more money.  It depends on the amount of bank reserves the bank has.  So printed money out of thin air, use that to buy back treasury bonds, put those on the treasury general account as bank reserves, loan out the money as per the amount of bank reserves, start the process over again.  That is why the US now has M2 money supply in the $22 trillion range.  In 1959, M2 money supply totaled about $286 billion.  Click here to view the chart for reference.

When money supply is this high.  The bond market is at $33 trillion presently.  Real rates are negative on the 10 year and 30 year bonds.  Real rates are interest rate on each bond minus CPI inflation.  CPI Inflation was 1.4% in December 2020.  Now it is 6.8%.  Worst since 1982.  So real rates are negative.  Banks give you a negative return on your money on an inflation adjusted basis.  This limits where investment money can go.  It also limits where there is less risk.  Is the stock market less risk?  Yesterday, we wrote about the huge risk from China Evergrande and it’s $300 billion pending bankruptcy.  It has already defaulted on it’s bond payment.  By comparison Lehman Brothers in 2008 was $1 billion.  The bond market is a risk, we know interest rates are climbing in 2022 and 2023.  Therefore, with higher rates on the horizon, the bond market globally on a high stress high wire, a bankruptcy 300X worse than Lehman Brothers looming, clearly the stock market is high risk.  Most hedge funds are derisking looking for alternatives.  Many have come to Bitcoin, Defi, and NFT’s.  All blockchain based.  Yet for the store of value side of it.  Only Bitcoin is provably scarce.  The cap of 21 million coins to ever be produced ensures that.  Bitcoin has enough scarcity that when other assets are priced in Bitcoin, they lose value.  Hence the term, store of value.  This chart from yesterday belabors the point.  But, since the Bank of England mentioned publicly Bitcoin could go to zero.  We would like to show this chart again today, of the brittish pound going to zero, priced in Bitcoin: 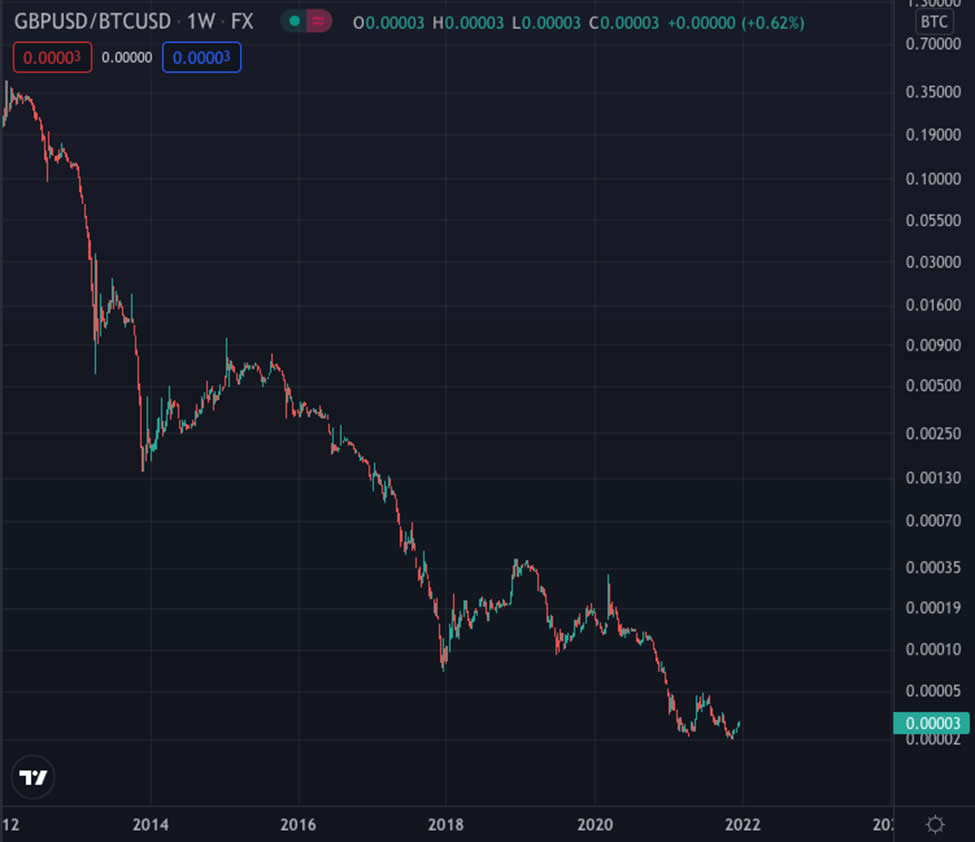 Private central banks do not want Bitcoin to make it.  It is decentralized, no need for a bank account if you have enough Bitcoin.  It is scarce, and when any asset is priced in Bitcoin, it loses value, fast!  Gold, Silver, SPX, QQQ, they all lose to Bitcoin.  Ethereum has similar charts as well.  It is the gateway into Defi, gaming, NFT’s.  We focus more on Bitcoin but this next chart shows the correlation: 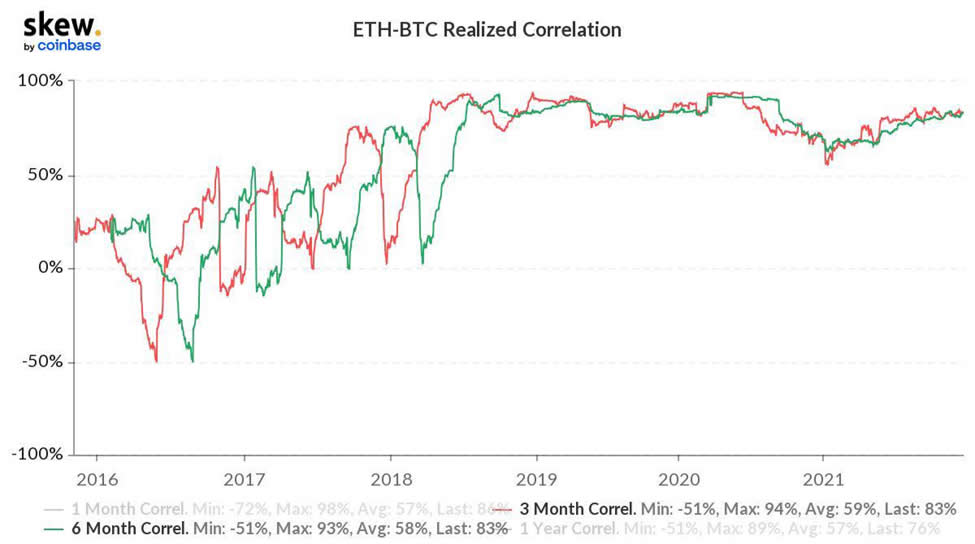 Bottom line, Bitcoin is scarce and ETH is not, but they trade together and have for a long time.  ETH is just more volatile.  We own very little ETH compared to Bitcoin.  The store of value aspect is too compelling for Bitcoin.

Keep in mind, in 2018, the SEC declared both Bitcoin and Ethereum non securities and property, click here to view on twitter.

This case against ripple is creating waves about that decleration.  Yet, we know Bitcoin is not a security.  Even if that gets declared so, Bitcoin is mined globally.  Miners can move and the difficulty adjustment keeps blocks being produced on the blockchain every 10 minutes.  What we see happening is manipulation by whales and institutional investors (Bitcoin Future’s ETF’s).  This manipulation has to end, as soon as there is no more Bitcoin left on exchanges.  The exchange balance is dangerously low now.  As this drops (orange line on chart below), the likelihood of a major breakout gets far greater.  Simple supply demand: 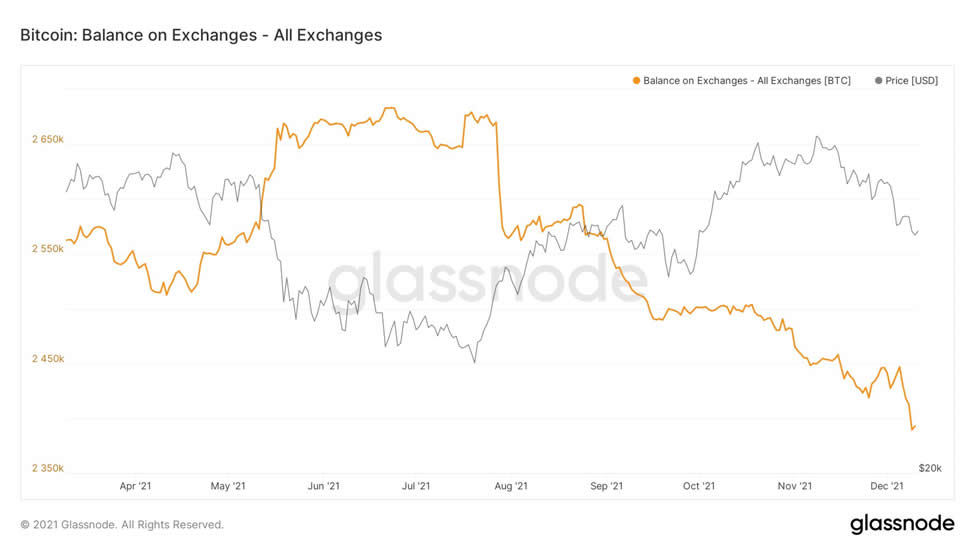 After testing support at the 1.472 level (yellow arrow) Bitcoin uses that level as a springboard for the final run up at the end of each bull market cycle.  This is not financial advise.  However, this supports our long held theory that Bitcoin’s bull run is NOT over.  It is taking longer, but it’s NOT over!  Lengthening cycles is obvious when a zoomed out 10 year chart is observed.  Need still more proof Bitcoin is at a bottoming stage, at the base of the springboard?  The fear and greed index color coded, red is greed, blue is fear.  When Bitcoin fear and greed is blue on this chart, it is an accumulation opportunity.  That means buy this dip!  We know we have said this before, but this could very well be the last dip before the parabolic run up to end the bull market cycle!  See the chart below: 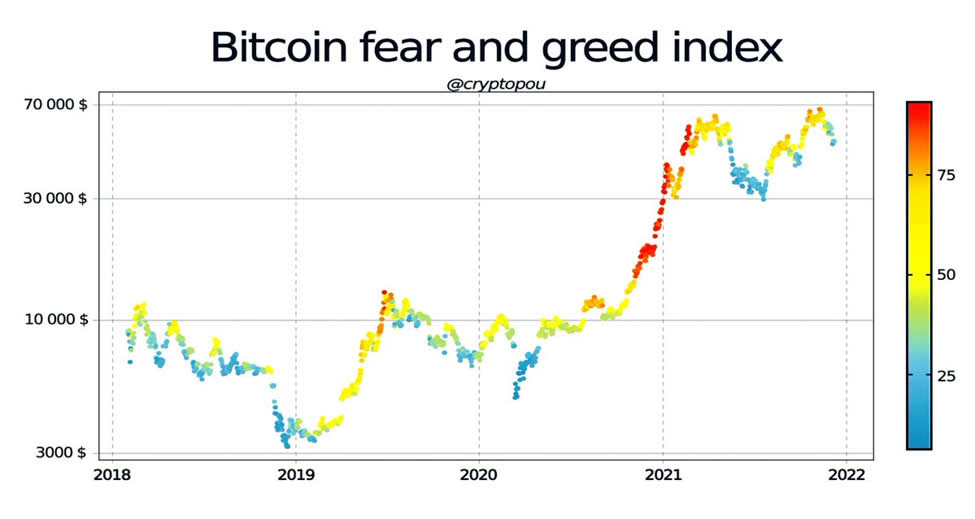 We are not financial advisors and this is not financial advise.  We just see the charts, understand on chain analysis, and we know the global macro environment will send scared money into the best store of value, which is Bitcoin.  A lot of scared money is waiting on the sidelines to get in when this parabolic run up happens.  We have been in for almost two years.  Below $6,800.  The time to delay is gone.  Don’t go down with the private central banks holding their worthless fiat currency!  Buy this dip, it’s going to get fun soon!