Yesterday, Bitcoin created a new high at approximately $67K, depending on the exchange you go by.  Now it is in price discovery.  No history of resistance above the previous ATH.  So what will keep Bitcoin in price discovery, and keep demand up?

The ProShares Bitcoin ETF had $993.3 million in volume.  Highest volume for a new ETF in NYSE history:

Peter Thiel (Billionaire Investor) said he is “underinvested” in Bitcoin.  He plans to double down on that investment.  Here is another quote from yesterday:

“Bitcoin’s rise was a rebuke of the world’s financial systems, Bitcoin at $66,000, is it going to go up?  Maybe, but it surely tells us that we are at a complete bankruptcy moment for the central banks.”

Paul Tudor Jones weighs in as well:
“I think a better way to get in would be to actually own the physical Bitcoin.  To take the time to learn how to own it.”

"The number one issue facing main street investors is inflation, and it’s pretty clear to me that inflation is not transitory.”  He also prefers Bitcoin over Gold, as a hedge against Inflation.

Neutral ATM has been proving how Bitcoin is a better inflation hedge than Gold for 16 months on these blogs.  We own very little Gold.  We are over 85% Bitcoin.  We believe in it throuroghly.  Monetary devaluation is not going to let up, it will keep worsening.  Inflation hedges are growing, globally, in importance.  Therefore, the realization, that Bitcoin is the life boat, or escape hatch, to monetary devaluation is incredibly bullish!

The supply shock ratios of Bitcoin are at all time highs as of last week, bullish!: 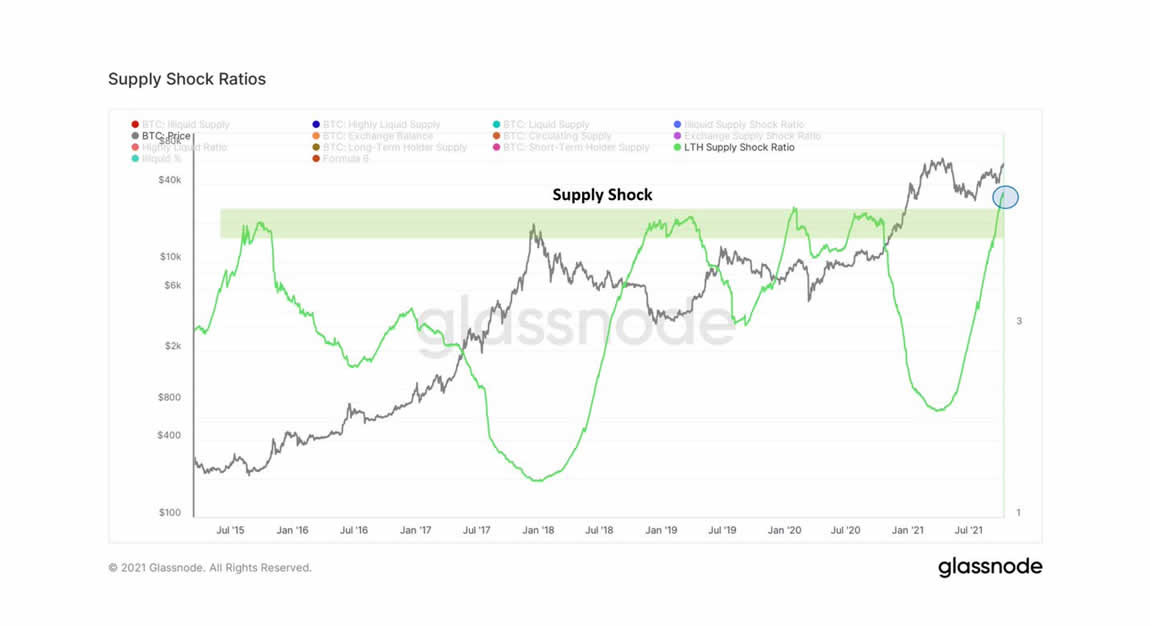 Realized price distribution is dropping rapidly.  That means there is no realized price selling at the prices above $67K.  This is also very bullish for the future price action in Bitcoin: 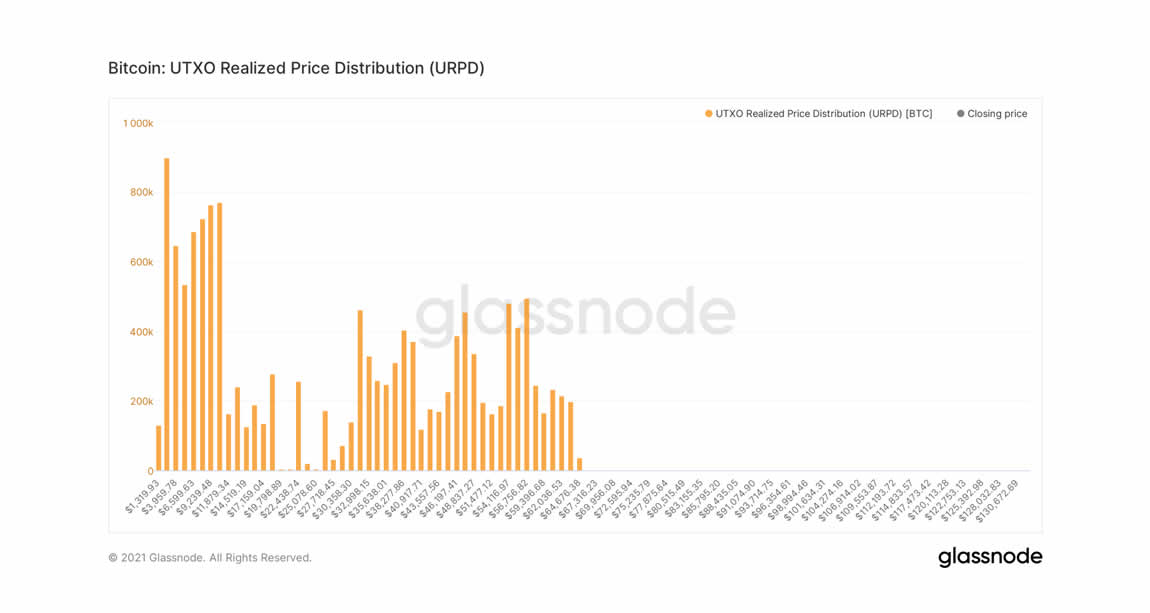 Bitcoin long term holder supply shock in the chart below, shows peak accumulation levels, which send the price parabolic for a few months.  We expect parabolic price action in to December, and likely January, February: 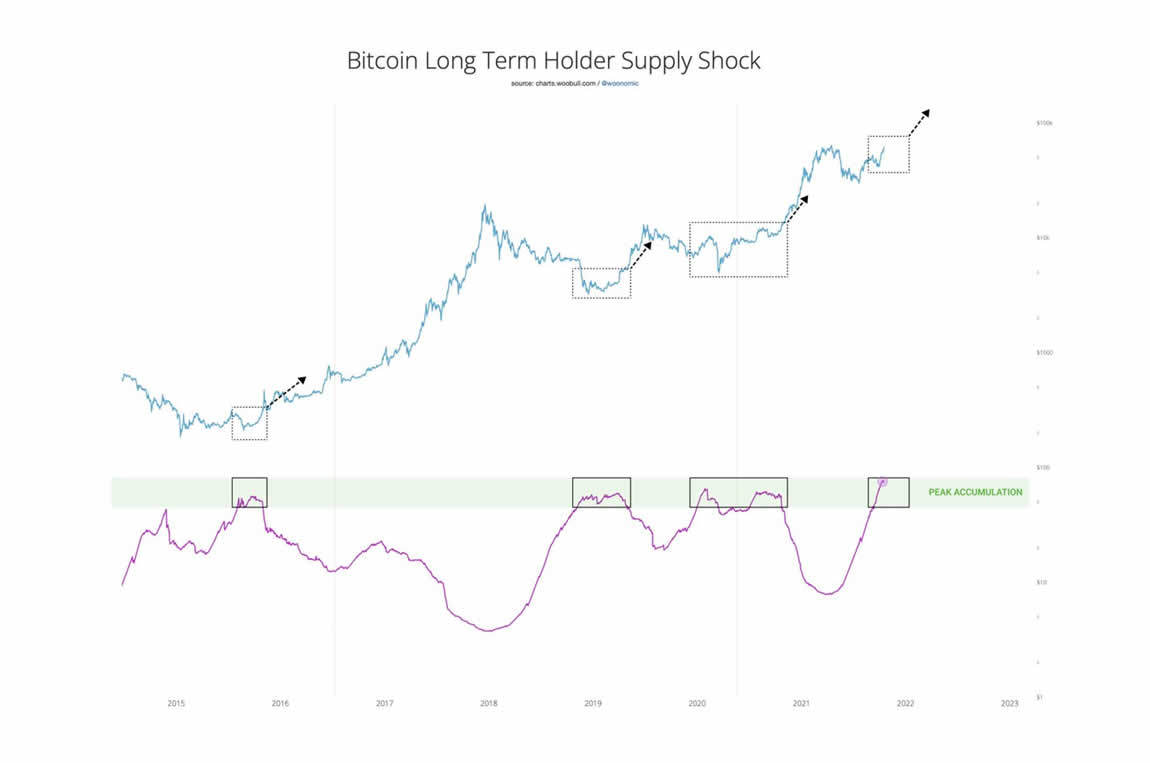 This next chart shows us Bitcoin returns after recovering from a 50% drawdown.  Since we have already established, in past blogs, how this bull run rhymes with the 2013 bull run.  Seeing we have a double top forming, it is obvious that Bitcoin could easily grow half or close to it, of the 2017 bull run of 1620%.  If that is the case Bitcoin has another 500% to go, in this second leg!:

In conclusion, we see Institutional Investors, Nation States, Hedge Funds, ETF’s, Banks, and now Pension Funds investing in Bitcoin as their liferaft to this tragic, and growing monetary devaluation consuming all currencies globally.  Neutral ATM saw this coming.  We are starting to wonder if it won’t end up worse than we ever imagined it would be!  It that is true, Bitcoin could hit $300K, $400K, $500K per coin in this bull run.  Bitcoin has no top, because the dollar has no bottom!  It is tragic, human suffering will increase, we are just urging, without giving financial advise, that people hedge inflation with Bitcoin.