Bitcoin; PAIN in Europe is coming!

The UK prime minister Liz Truss, a Keynsian economics fan, argues that Tax reductions, and increased government spending will save their economy.  However, reducing taxes on a sliding scale actually increases the velocity of money or demand in the UK.  That is what they wanted.  What they did not want, was government spending increasing at the same time, as the US is raising rates, and increasing the FFR (Fed Funds Rate) for the US dollar.  This will cause problems.  The main problem being the UK bond market.  UK Bond funds want USD not Pounds.  They will convert Pounds into USD, and buy US Treasuries to chase higher yields.  Then, the UK Pension Funds will collapse.  This leads to more UK quantitative easing, government spending (to buy back their treasuries).  This leads to ever increasing inflation.  What we are seeing now, is the all out financial collapse of the EU.  First the UK, Germany next, and the rest will follow!  Portugal has the most Bitcoin friendly economy in Europe.  We will see if they make a move towards Bitcoin.  Remember, Maidera, Portugal a small island with a very low population, already made Bitcoin legal tender.  The point is, Bitcoin has programmable scarcity, and the more it is attacked, the more the hash rate (amount of Bitcoin being mined) goes up.  As Bitcoin price rises in 2023 – 2025, more nation states will adopt it as legal tender.  Here is the article about the Bank of England buying back their own bonds to stop the financial crisis, click here to read more.

We can see where this is going, we just don’t know how long it will take to get there.  Also, BASF the largest chemical manufacturer in Germany is closing multiple facilities, and is under intense financial stress.

Much of this is caused by the dollar milkshake theory.  We explained this a few weeks ago.  As the USD strengthens, other European bond markets will increase demand for USD, and they all have to buy back their own bonds more and more, they will have to convert to USD and buy US treasury bonds to get the higher yields.  The dollar will be the last currency standing, but it too will fail due to inflation.  That could take some time.  For now, the DXY is strengthening due to all of the monthly rate hikes, which brings US dollars back to the US to buy US treasuries.  It is a short term power move, but the long term implications spell collapse.  When?  We don’t know.  Here is the DXY chart.  Everyone is watching for a break in this longer term parabola it has been on, all of 2022!: 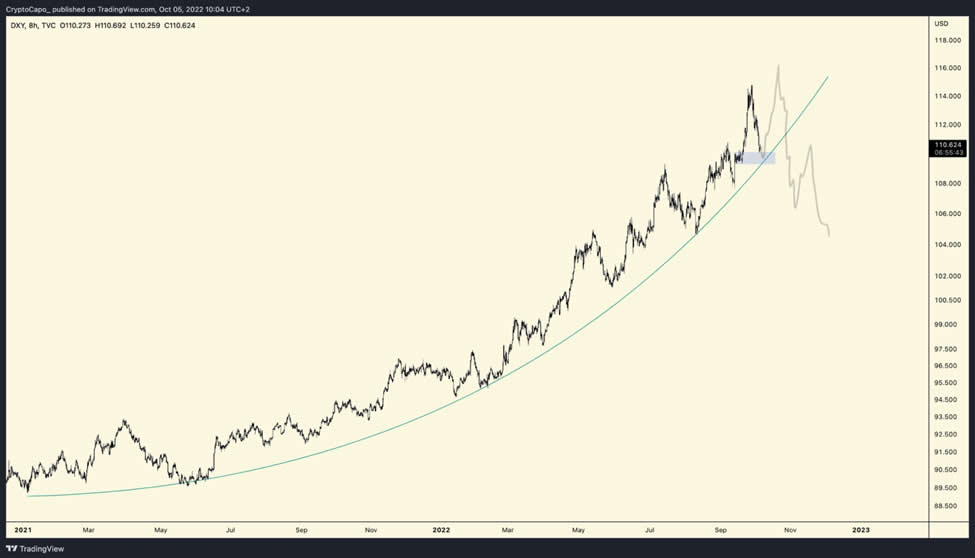 When the DXY finally make a large move down, whenever that is.  Bitcoin will make it’s move the opposite way which it always does.  It moves counter to the DXY every time!  Here is the stock to flow model.  Plan B the founder of this model is now stating that $20K Bitcoin, is equivalent to $4K Bitcoin in 2018.  Once this is broken and retested.  The swing back up will be longer term.  We are waiting on the DXY for that: 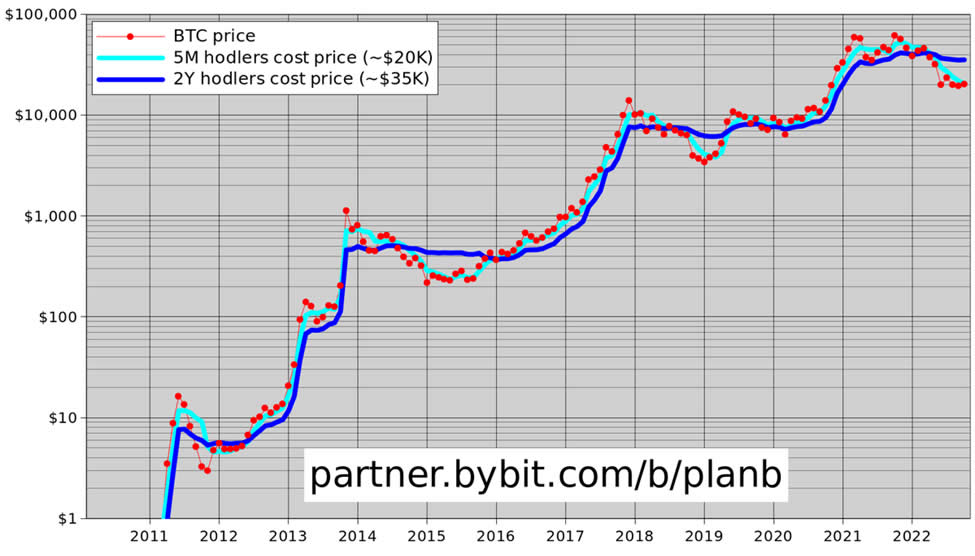 Bitcoin has retested it’s resistance but has not yet broken out.  Obviously, the DXY has not broken down yet either.  This change is coming, it’s just not here yet. Here is the chart showing the channel Bitcoin has been in for months now:

This last article from Coin Desk is interesting, in that it depicts major banking lobby groups asking for the following change in the cap to investing in Bitcoin:

They want to see the cap raised from 1% to 5% of a bank’s Tier 1 capital – the core financial instruments issued by the bank – and for supervisors to look at net positions rather than gross.  This change represents a $9 trillion investment in Bitcoin.  We can only watch to see if a change like this in the cap for Bitcoin investment, will come to fruition, click here to read more.

So, we see pressure from Banks to be able to add more Bitcoin to their balance sheets, as Europe is well on it’s way to a sovereign debt crisis collapse!  This tells us that Bitcoin is very well positioned.  We already know the next miner reward halving is set for early 2024.  That will really kick off the bull run in earnest!  For now, we wait and watch how everything plays out!  We cannot sit in stock /bond portfolios and watch hyperinflation play out in slow motion.  For over two years we have written about the monetary systems issues.  Zero backing, behind these global fiat currencies.  Now, in 2022 they are beginning to collapse.  Let’s see how it plays out, and where Bitcoin ends up.  We see the BRICS currency proposal, of a basket of precious metals backing currencies, with Bitcoin for international settlements, as the option nation states will eventually choose.  This will play out over 2023 and 2024.  It won’t take that long, it is too important to get this right, and move forward.  We are not financial advisors and this is not financial advise.  We see a number of winners when this all plays out.  Bitcoin, Silver, Gold, Land, Art to name what we are familiar with.  Hard assets, that are scarce!  Anything else, may not hold it’s value at all, which includes the US dollar!