This video from Raoul Pal of Real Vision, and Global Macro Investor is worth watching.  It gets in the weeds on NFT’s at the end.  But there are some real problems looming since 2000 and worse since 2009, regarding the debt cycle, yield curve control, deflation, the ongoing devaluation of the global monetary system!  Yes inflation is real.  It is an issue, but worse is the fact that all currencies globally are devaluing themselves as well.  So, USD inflation is there, but the EU inflation may be worse, the AUD is worse than that, etc.  Therefore, central banks have to print currency so as to cheapen their debt.  The US is the worlds largest debtor nation and the USD is our largest export.  Therefore, it is more devaluation of the global monetary system that threatens every economy not just the US.  Many are confused by the CPI Inflation statistics, and how they relate to monetary policy vs fiscal policy.  The two are melding into one, and the end result is in most countries globally, the monetary system is devaluing itself.  There is 0% to 2% yield in bonds, in Europe it is negative.  The pull out from Afghanistan is part and parcel to all of this.  Funding wars is too expensive and must be avoided.  However, monetary system collapse and the required yield curve control forced on to central banks, whereby they have to print and grow the money stock, money supply, to cheapen their debt and control bond yields.  This is the root cause of these monetary system problems.  Largely those were brought on by fiat currencies not being backed by anything since 08/15/1971.  When President Nixon brought the US out of the Gold standard.  Going back to the Gold standard is not any kind of option.  That option ended 50 years ago.  CBDC (central bank digital currencies) are popular and largely the direction many countries like the EU, China, and the US are going in, at the present.  However, CBDC will give central banks the power to print notes or dollars digitally and control human behavior through issuing CBDC, or not, depending on behavior.  Therefore, there is likely going to be a rush to the exits, so to speak, towards permissionless, decentralized, digital assets.  Like Bitcoin.  Since all altcoins are NOT decentralized and permissionless.  Many of them are taxed as securities, while Bitcoin is considered like property (per the SEC).  The blockchain which only Bitcoin is on, is scarce, and proof of work.  Yesterday, we contrasted the proof of work Bitcoin is under, compared to the proof of work the USD is under.  Behavioral Economics will likely reign as the next system after the end of fiat currency, as we know it.  Behavioral economics is indexed by Metcalfe’s Law.  As investors are rewarded the incentive to change one’s behavior and invest in a particular digital asset, raises the value of that digital asset.  That is Metcalfe’s Law, the Network Effect.

Neutral ATM sees the next big change, rush to the exits, is the deflationary stock market crash.  Will that be this fall, seems likely.  We see a rush into the USD, which pushes up the DXY Index.  That has been range bound in the 90’s for most of 2021.  Gold, Silver will see a bump.  Yet, Bitcoin is likely to receive the largest percentage of the wall of money leaving the traditional stock indexes.  There has already been a wall of money investing into Bitcoin, Defi, NFT’s since early 2020.  If stocks crash, that will increase, and it is only reasonable to expect this.  Monetary policy has caused the stock bubble which will inevitably burst.  If and when that does happen, Bitcoin is poised to benefit the most.  Real Estate will also take a massive hit if this crash is large enough.  We have no way of knowing that yet.  It is a waiting game at this point.  Here are some charts to prove these points.  First, the public lightning network is over 2,300 Bitcoin.  This network allows anyone in the world to transfer Bitcoin inexpensively and eliminates central bank remittances.  This was previously a $500 Billion industry.  In Central and South America citizens of those countries are paying 20% to 30% in some cases for remittance into the country from the US.  Bitcoin’s Lightning network supercedes this, and allows someone in the US and someone in Mexico, Peru, or El Salvador to send Bitcoin over the lightning network in seconds, for very little in fees.  This will raise adoption:

Bitcoin ATM’s are fast and convenient, and serve a purpose as well.  Neutral ATM plays a role in this, albeit a small one.  We have 4 new locations in the Houston area and are putting 6 more by the end of 2021.

Now we will look at how other assets priced in Bitcoin fair.  This proves why Bitcoin will be the place to reside your money when signs of this monetary devaluation become more and more evident. 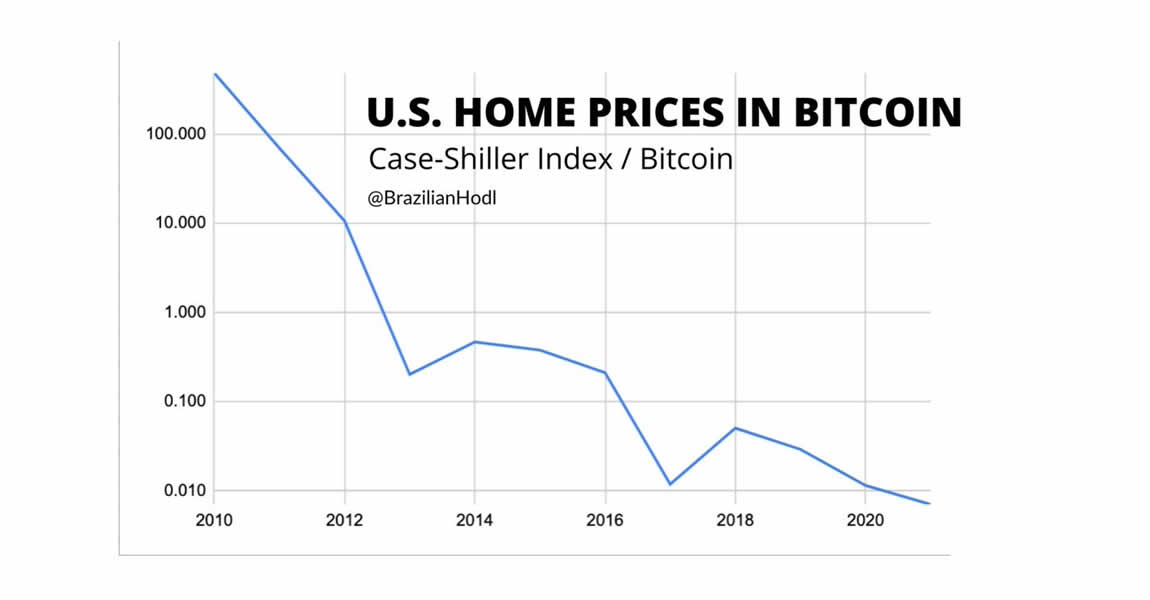 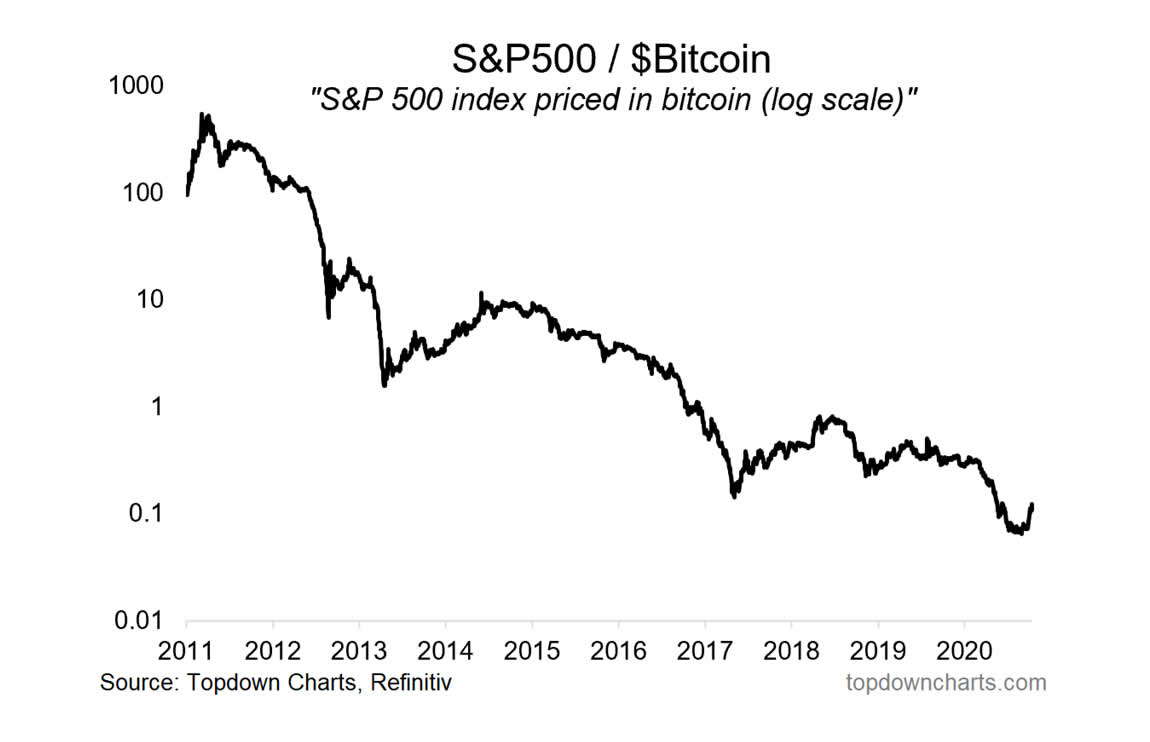 Same thing here, the S&P500 is at all time record levels with P/E ratios nearing 39 on average. 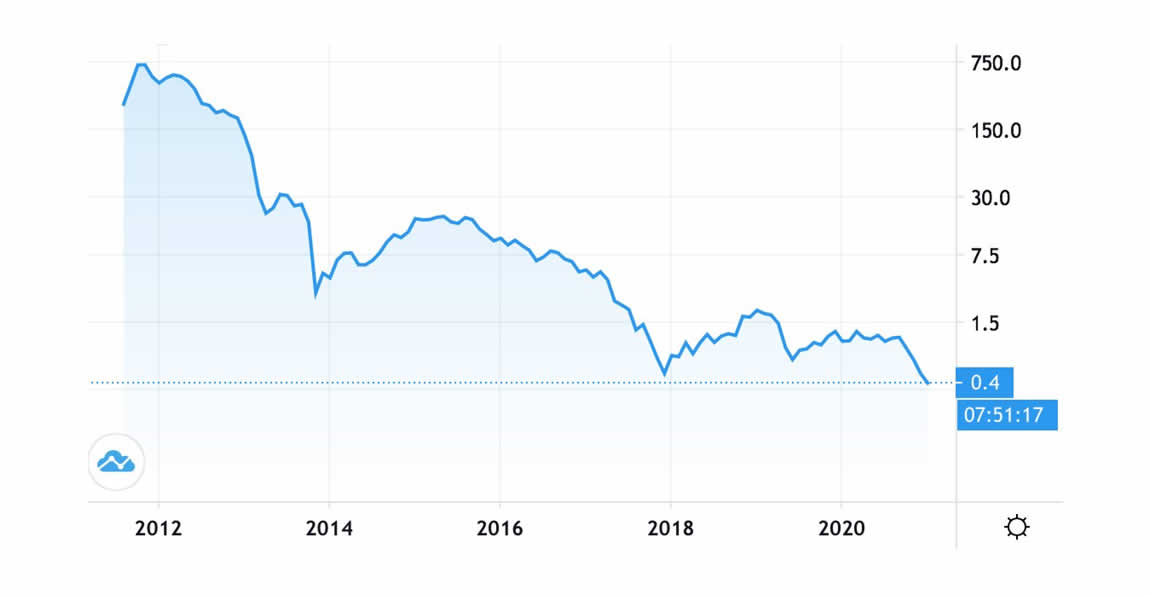 Here is a chart on the Nasdaq priced in Bitcoin for 10 years.  It is dropping off a cliff like the SPX is, yet the NDX is also at all time record levels!

Goods and services, stocks, real estate all look like the price is going up forever.  However, this is more to do with the valuation of the USD.

Meanwhile, the supply shock ratios in Bitcoin actual price are looking for a breakout above $50K.  It has been close this week, perhaps by the weekend Bitcoin will finally break above $50K again!  The illiquid supply shock ratio pushes the Bitcoin price up from behind.  It is a leading indicator.  Perhaps, Bitcoin will pump the end of this week and into the weekend?: 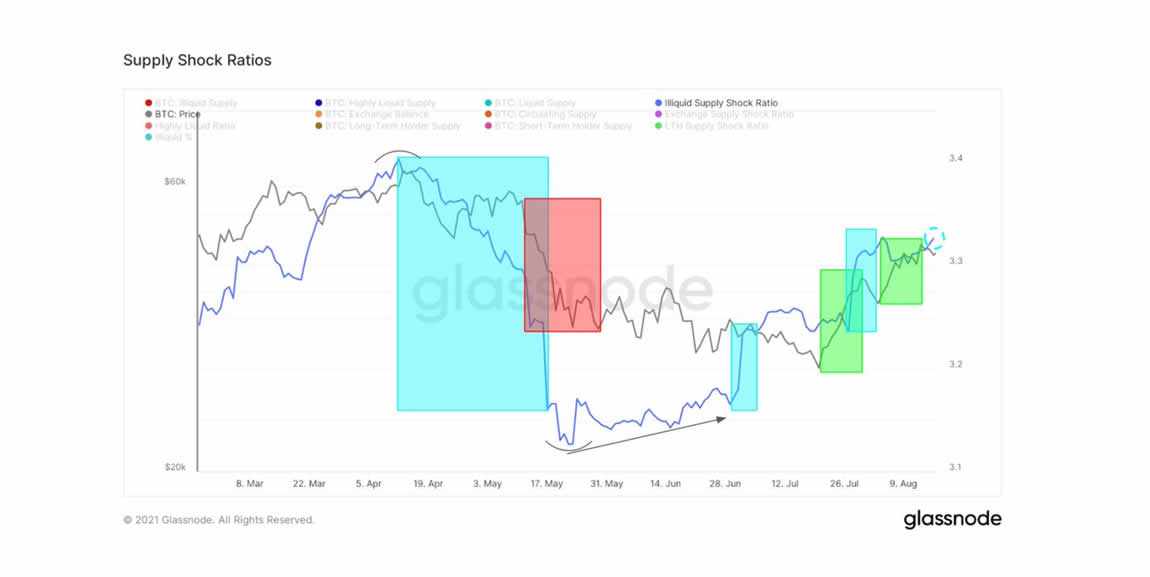 Even it it does’nt.  That is short term.  The global macro environment has never been better for Bitcoin.  The world needs a free market monetary system, free from central controllers trying to manipulate the system, for predetermined outcomes.