Bitcoin on the World Stage!

Bitcoin is over $40,700, ETH is nearing $3,000 as the FOMC announcement comes today.  Bitcoin has been boring and consolidating all year.  Now, and over the next several weeks more information will come out about the EO from President Biden on cryptocurrencies.  Here is the latest on Bitcoin’s most recent rise as the FOMC announcement looms today, click here to view on twitter.

Janet Yellen called Putin’s Executive Order on Crypto, “historic”.  Based on reading this executive order, and understanding that CPI is now 7.9% when it was 1.4% before the pandemic started in 2020.  Understanding that Saudi Arabia is negociating with China to use the Yuan in exchange for Oil instead of the US dollar!  If this goes through, the excelleration of USD devaluation will be mind boggling!  We expect CPI inflation of 16% to 18% by Christmas 2022.  That is 32% to 40% real inflation.  We have written adnauseam about how the CPI calculation is a fraction of real inflation.  It uses a ratio back to 1982 to 1984 when CPI inflation was double digit.  This EO will be “historic” in the sense that Americans will have another option when the dollar becomes basically worthless.  It may not look historic today, but give it 6 to 8 months.  Lives will be saved by Bitcoin!  Here is Janey Yellen’s statement, click here to view.

The “governments will ban it” era is dead – The US government gets it/is asking the right questions – They view Bitcoin/crypto as both an opportunity and a threat to financial dominance-CBDC is governments response to unmet nees that Bitcoin already solves for.  Here is Jack Posobiec on the EO, click here to read.

El Salvador is already using Bitcoin as legal tender and their volcano bond is doing well so far.  Russia, Iran, Iraq, Venezuela, Mexico, Paraguay, and Qatar are now looking at Bitcoin in this light.  Time will tell.  We believe we will all be surprised with how fast Bitcoin adoption picks up if the next shoe does drop against the dollar.  Saudi Arabia.  The petrodollar system switching over to the Yuan is a death blow to the USD as a global reserve currency.  It is only a matter of time before the knock out punch is delivered!  Where will the smart money run to?  Gold?  Silver?  CBDC?  We say no or not so much to all three.  Smart money will run to Bitcoin and that is where smart money is investing now.  Why is Bloomberg majority Crypto and Bitcoin commercials?  Why are so many countries considering Bitcoin as legal tender?  The answer is the USD is too bloated in supply and the strength on the DXY chart is a temporary flight to safety.  Here is the monthly candle DXY chart (USD Index) as a reference:

A reversal of this pattern would be drastic and Saudi Arabia moving to selling oil in Yuan and not USD is extremely drastic!    Keep in mind, Bitcoin is -14% for 2022 so far.  The strength of the USD is the main reason for that.  The loss in buying power of the dollar is why Bitcoin exists, Bitcoin and the USD are tied together.  Bitcoin is property, a digital currency.  Since everything is going digital and that is the future.  We believe CBDC will be the next central bank currency to take over and compete with Bitcoin.  However, CBDC lacks scarcity and is NOT a store of value.  Bitcoin handles those issues better than any asset on earth, and that is not changing anytime soon with the petroyuan coming on the scene.

The FOMC announcement is today and Neutral ATM ran a poll on twitter.  The results are:

We see 25 bps as the most likely result.  The announcement will likely pump Bitcoin some if it is 0-25 bps.  Here is a look at the Fed right now: 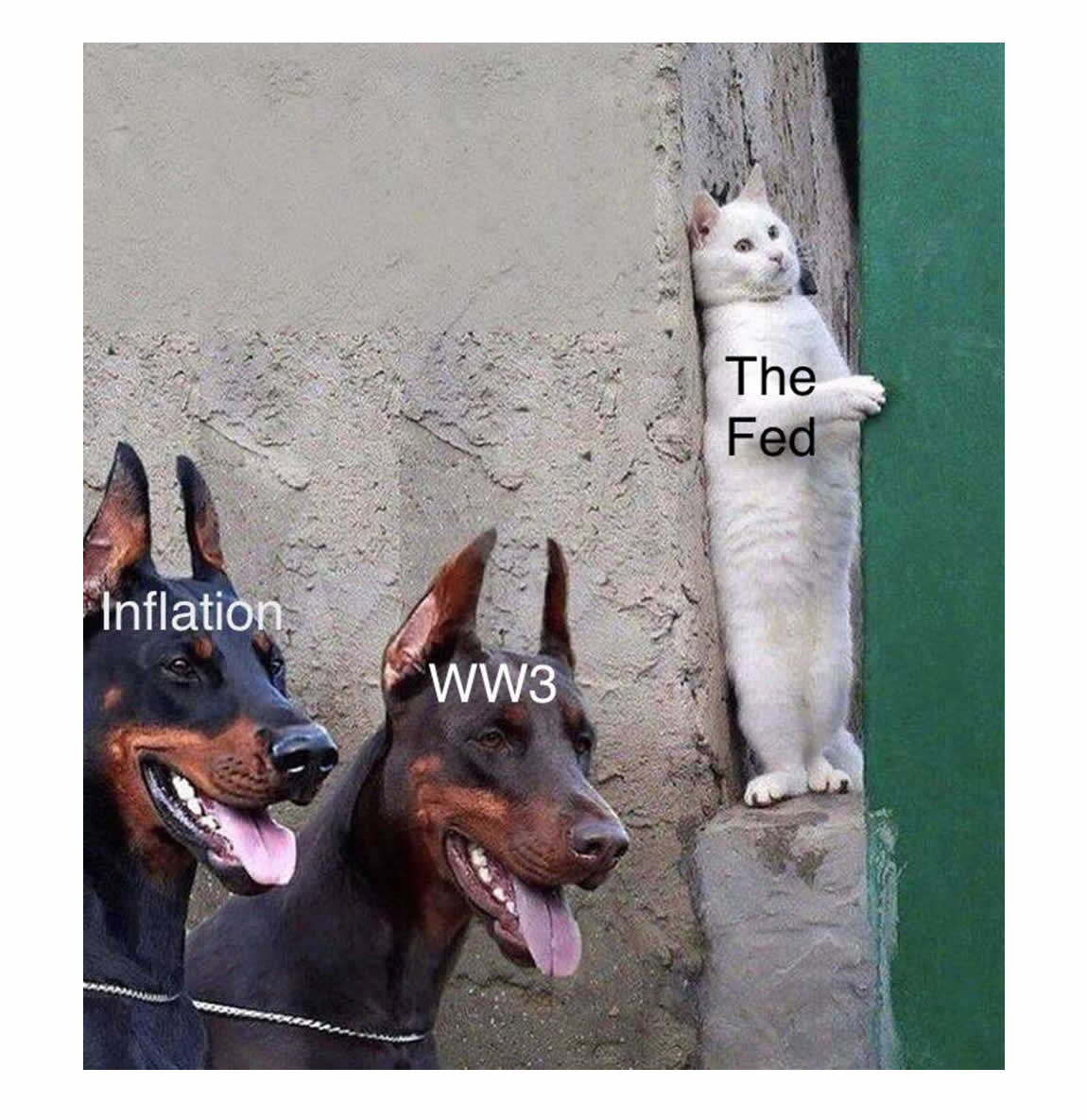 Here are two competing views on where Bitcoin will go in the future before this bull run gives way to the 2024 halving event.  This next chart is the Plan C floor model.  He is claiming a floor of $27K could be reached before Bitcoin takes off for a new ATH later this year: