Despite mass media throwing FUD at Bitcoin, Christine Leggarde the ECB chairman doing the same.  Bitcoin is shining bright and about to confirm an important breakout threshold for the second straight month.  If Bitcoin pulls this off, and it looks good that it will, December will be a HISTORIC month.  Not only for Bitcoin but Ethereum too!  More on that later.  We want to start with more global macro as a background to the monthly close for Bitcoin.

Lyn Alden pointed this out today.  Percent of GDP in global trade, as accounted for by the world bank, has been dropping fast since 2020.  The only other times deglobalization sped up this fast were 2008 and 1987.  Both stock market crash years.  This crash may be in 2022, or it may come in December.  All we know is, whenever it does happen, it’s going to be bad.  Greater than a 60% stock market crash!  Deglobalization means trade route disruptions, and lagging demand globally has caused countries to stop trading globally as much, hence the drop in percent of GDP: 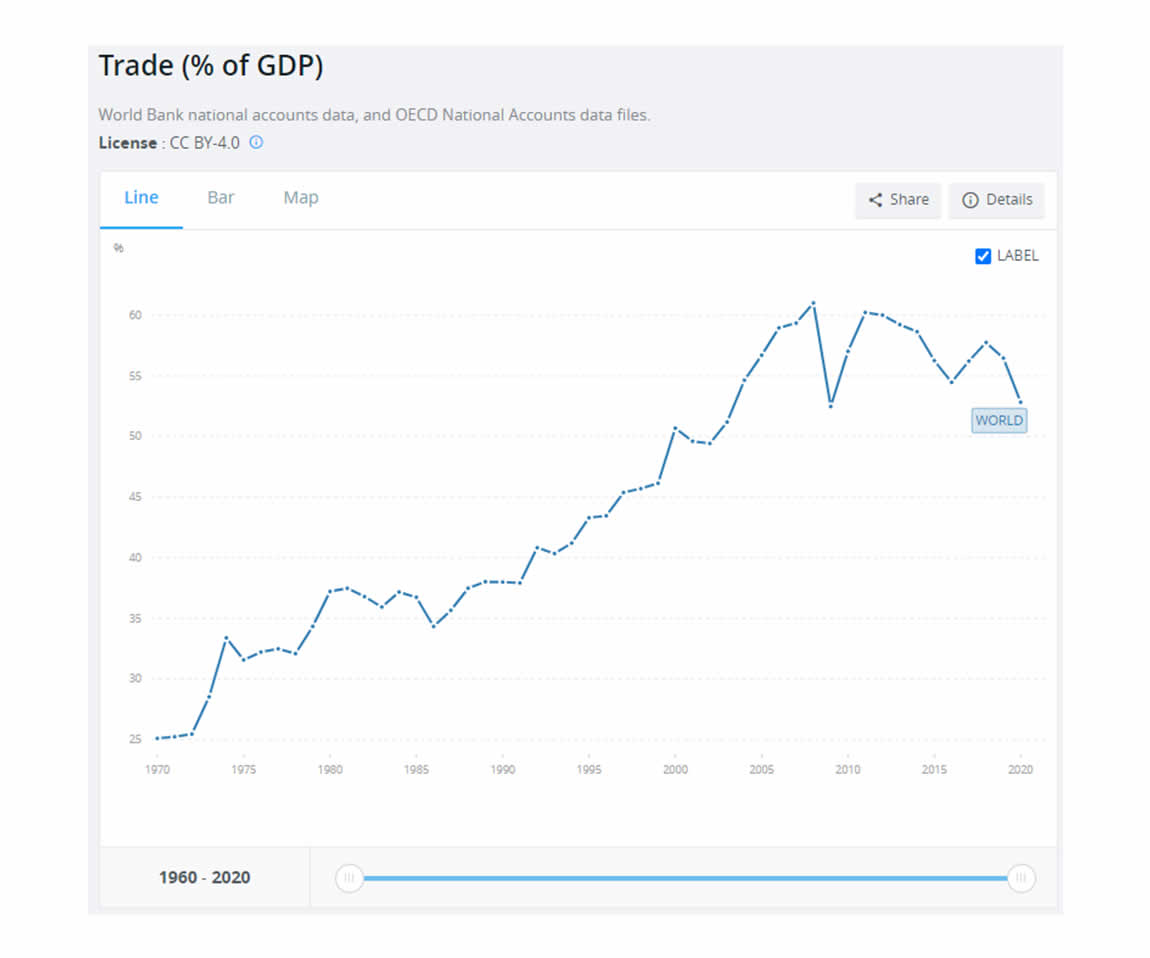 This next chart tracks inflation.  S&P 500 priced in Case-Shiller US National Home Price Index.  Home prices have been inflating like crazy since corona virus first hit in March 2020.  This chart is parabolic!  What does that say about the value of the US Dollar?  Here is the chart below:

Buying power of all Americans is being taxed heavily by inflation.  Americans who can afford Real Estate and stocks are getting richer now, those who can’t are getting much poorer.  Therefore, as yesterday’s blog discussed, wealth inequality is being exacerbated by inflation.  Which is merely, the devaluation of the US Dollar!  This war against the USD will continue.  If the Fed actually does raise rates.  That WILL crash the stock market and drag Real Estate down with it!  If that does happen.  Smart money will pour into Bitcoin, Ethereum and other digital assets.  Gold may not get that much benefit, as Bitcoin has stolen the mantel of store of value, inflation hedge from Gold.  Only when things get really bad will Gold go parabolic.  We hope that situation never arises.  If it does the USD will have no value whatsoever!  In the meantime, invest in Bitcoin.  It is a powderkeg, about to explode!  The monthly close is midnight tonight.  If Bitcoin can close November above $57K, which is the middle green line on this chart below.  That will be a second month above that threshold.  A confirmation monthly candle, confirming the October breakout will send Bitcoin!  See the channel in the chart below.  The green line is the middle of the channel.  We broke above it in February throught April.  Then, we had that line as resistance until October.  If November closes above $57K, we should see the parabolic move up for the second leg of the bull run, in December.  Bitcoin could double or triple, just in December!  That would be the second leg, the parabolic move we have been writing about since April.  The delay has been longer than expected, but we know Bitcoin cycles lengthen every 4 years.  Here is the first chart:

Now look at the Bitcoin price monthly candle chart with the RSI in green below:

This next chart gives a close up of RSI, thanks to Crypto Crew University and Steve Courtney for these charts:

The RSI channel is 67 to 72.  Bitcoin had higher lows and higher highs going into this channel.  Notice the high double peak on RSI, when Bitcoin hit the first ATH of $64,829 on April 15th.  Then it peaked quickly in early November to $69K.  We can see on the above chart how fast Bitcoin can move when RSI goes parabolic.  Relative Strength Index is THE best indicator for what Bitcoin is about to do!  This is it!  November close above $57K, and look out.  Bitcoin will roar!  However, it may not last that long.  We could see a blow off top in late December or some time in January 2022!  These next few weeks will be critical.  Remember, this is not investment advise, and we are not investment advisors.   We research Bitcoin, global macro, and write about it.  Just know that now is the time to have and hold Bitcoin.  It is about to get really interesting.  You can either buy it cheap now and hold it until the peak of the 2025 bull market, or the 2029, 2033, or 2037 peaks.  Another option is a short term trade.  However, that is not how we do it.  We are long term holders.  We may only sell Bitcoin once every 2 or 3 years.  After the blow off top, we will be looking for Bitcoin below the 200 day exponential moving average in late 2022, early 2023.  If and when we find Bitcoin that cheap we may not sell again for a decade!  For those of you just now getting in to Bitcoin.  It is best to just hold it long term.  Don’t try to time the market, too risky!