Bitcoin Miner Revenue
The $1.5 billion in March Bitcoin mining revenue would be $18 billion annualized, which means that the Bitcoin network is valued at 61x the annualized revenue (current market cap of $1.1 trillion).  Therefore, the blockchain would be worth $67.1 trillion.  This means that there is plenty of room for Bitcoin to grow.  It has been pretty dormant, for nearly 6 weeks now.  Yet, 8 ETF’s are being started up in the US.  The list of institutions adopting Bitcoin on their balance sheet is impressive.  Even pensions like the City of Miami are adding Bitcoin to their balance sheet and paying employees in Bitcoin.  The breakout from this 6 week long bull flag will be epic.  We told all of you March was a bad month historically.  April is one of the best months historically.  Here are the large institutions adoping Bitcoin on their balance sheets: 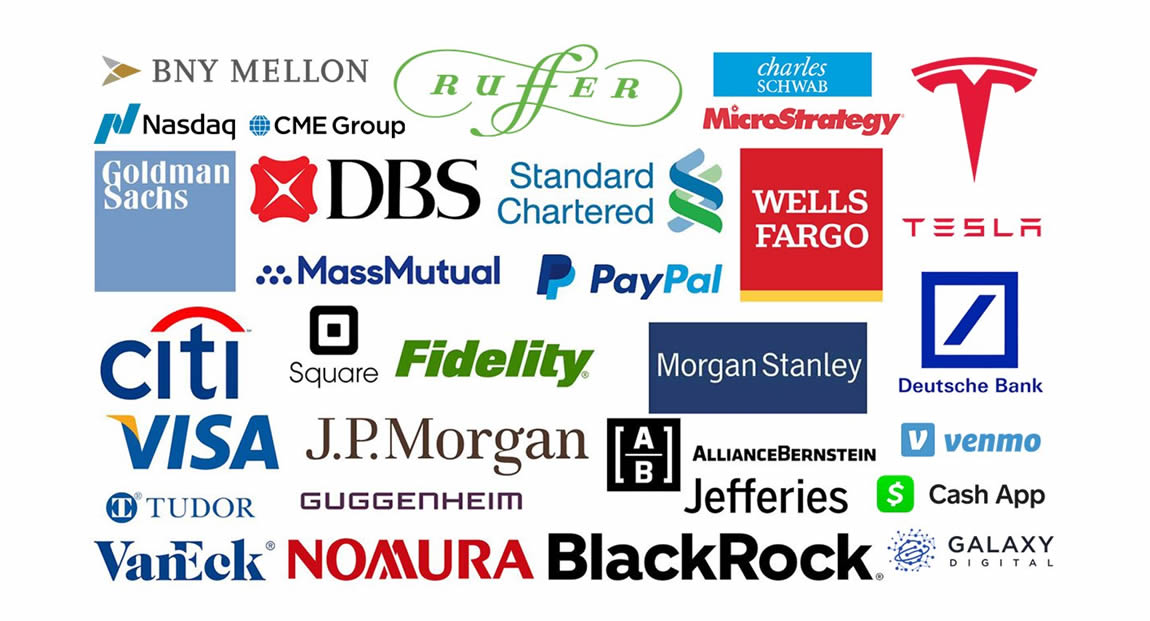 Appears the massive bull flag forming on the weekly Bitcoin chart reveals a massive breakout could occur this week.  Even if it takes longer, it’s worth the wait.  We use netdania.com to check the price.  Click on the weekly time frame and this flag is massive and obvious.  It has taken a long time to break out, but when it does, $70K plus will be in play.  Below is the chart: 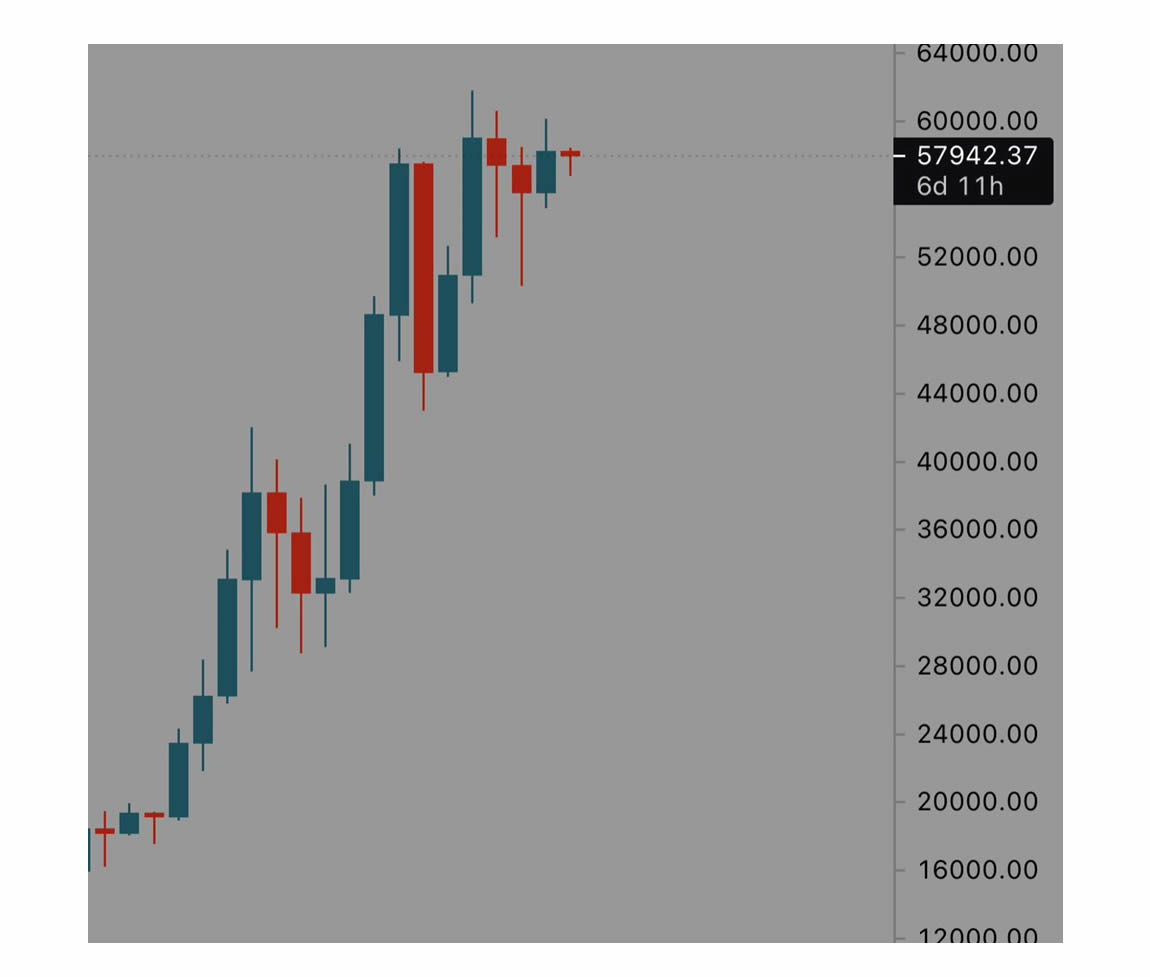 Basically, Bitcoin needs this price action to materialize soon, the re-accumulation has drug on longer than most anticipated, including Neutral ATM.  We have little to no doubt the breakout will happen.  It will be interesting to see if more pensions start allocating to Bitcoin once this break out does show up on the chart. 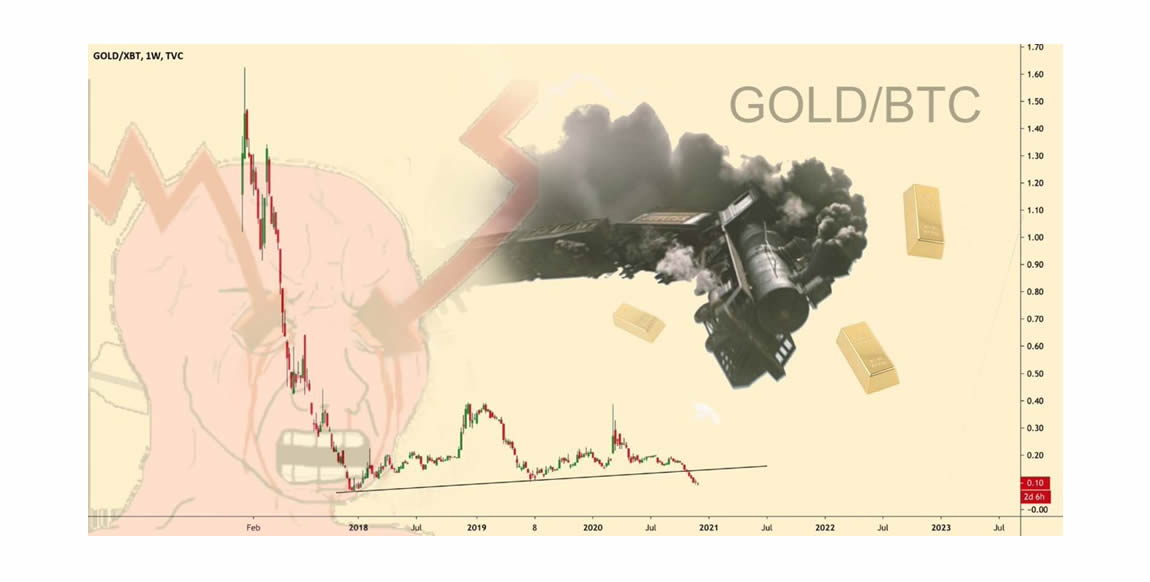 Any asset priced in Bitcoin is down.  Thus the nickname, the apex predator.  The miners are HODLing their Bitcoin knowing this breakout will happen at some point soon.  Re-accumulation lasting 6 weeks is not unheard of, although this may be the longest of this bull run.  We are quite sure it will not be the last.  Over the next month we would not be surprised to see Bitcoin into the $80K’s per coin.  We have also seen warnings that if Bitcoin does not break out by April 8th it could be a sign the bull run is over.  Our guess is that it will wait to the last day or so to break out.  But when it does, it will be huge!  We do not see how this bull run could be close to over with the kind of global macro environment the world is in right now.  We are all on board, and believe anyone HODLing Bitcoin should be buying this dip because in a few more months prices will be triple what they are right now.  That could be 3 months or it could be 6 months.  Point is, the environment of forced central bank money printing worldwide has swollen money supply to levels last seen in Argentina, when they hyperinflated their currency in 2001.  The first sign of a problem back then was a restriction on cash.  Neutral ATM has already noticed restrictions on cash from banks, and we believe it will get worse.  In response, we now offer an OTC Desk.  $11,000 minimum investment for a 4% fee.  Buy or sell, unlimited quantities.  Our goal is to make it easy to do business, and easy for our customers to HODL Bitcoin.

Bitcoin mining is far too profitable for miner capitulation this early in the bull run.  Prices will have to adjust.  Bitcoin supply is at all time lows.