For every million new users of Bitcoin, the price rises $200.  See this chart below for the correlation: 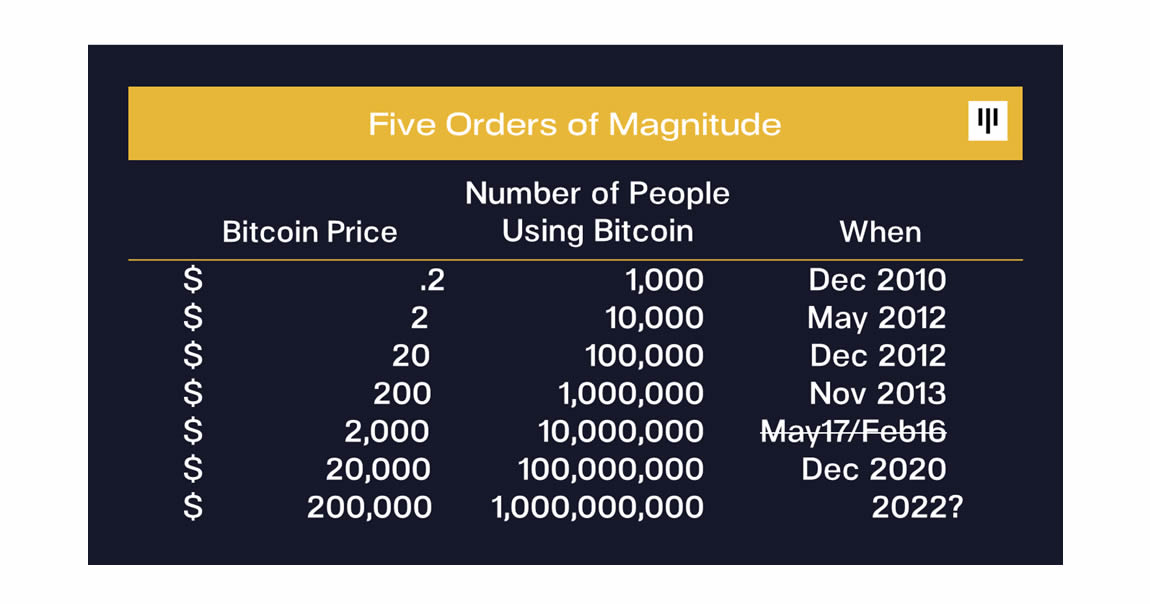 We thought this correlation, which we discovered today thanks to Dan Morehead, dovetails from the charts on yesterday’s blog.  Those showed how Bitcoin adoption is happening much faster than internet adoption did.  If every mobile phone user owned some Bitcoin that would be 3.5 billion users.  More on that later.

This next chart shows Bitcoin priced per number of people using it.  This chart mimic’s the stock to flow chart: 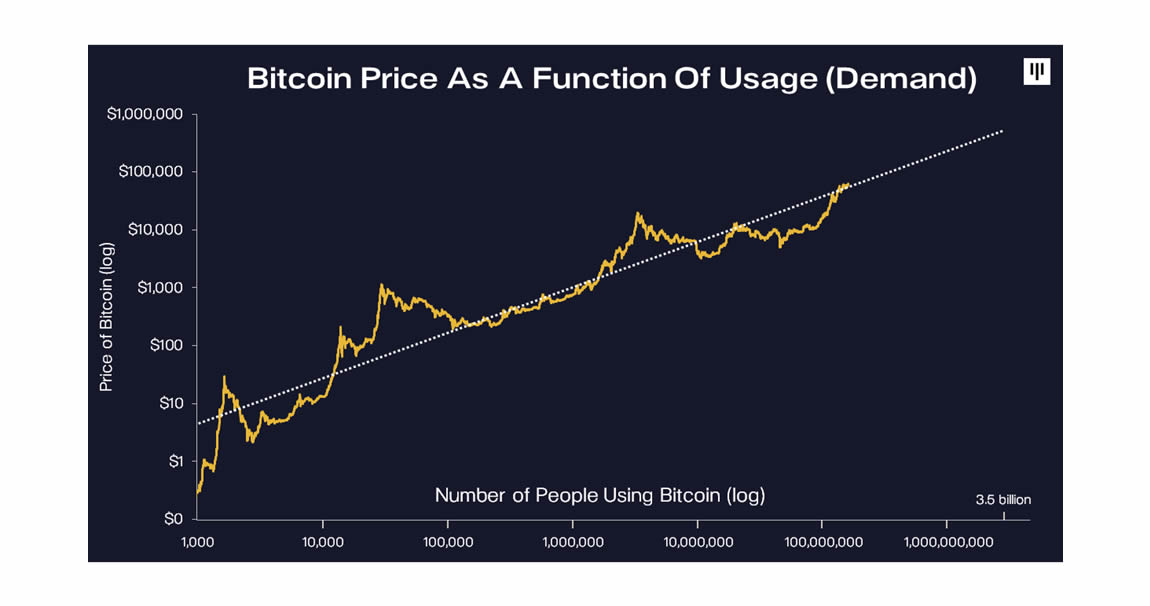 The difference being, that stock to flow is not a straight line as usage or demand shows above.  As scarcity is reduced at each halving, eventually, that effects demand.  Metcalf’s law, or the network effect are names for this phenomenon.  Basically, as scarcity is cut 50%, for the next 18 months to 24 months, miners slowly begin hoarding their Bitcoin.  Then, demand for Bitcoin reacts to the supply shock in an ever increasing fashion.  This creates cyclical bull markets in Bitcoin that can appear like a mania induced bubble.  But they are NOT bubbles.  They are the results of a supply shock that started 18 to 24 months earlier.  Production is hoarded at the miner level, then when it can no longer be hoarded, miners sell.  The cycle repeats.  Here is the stock to flow chart for reference: 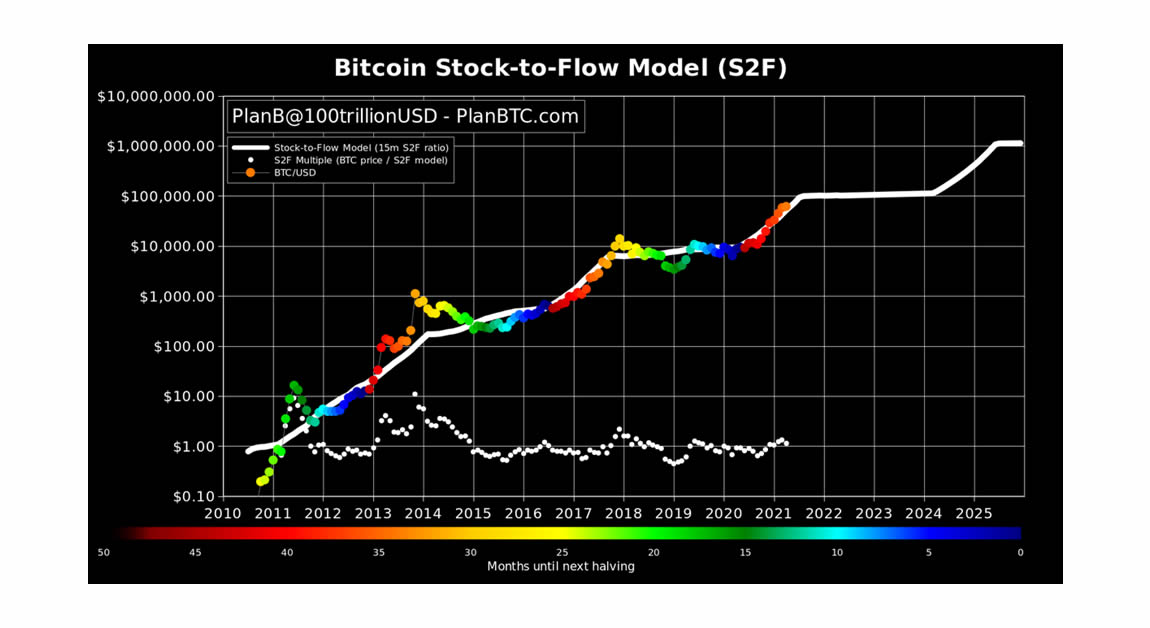 This begs the question.  When will Bitcoin reach terminal value?  What is terminal value.  The next chart shows that when all 3.5billion mobile phone users own Bitcoin, it will have reached terminal value.  Market saturation.  The peaks and valleys of price action begin to level out.  Getting in before terminal value is reached is key for assymetric gains.  Here is the chart: 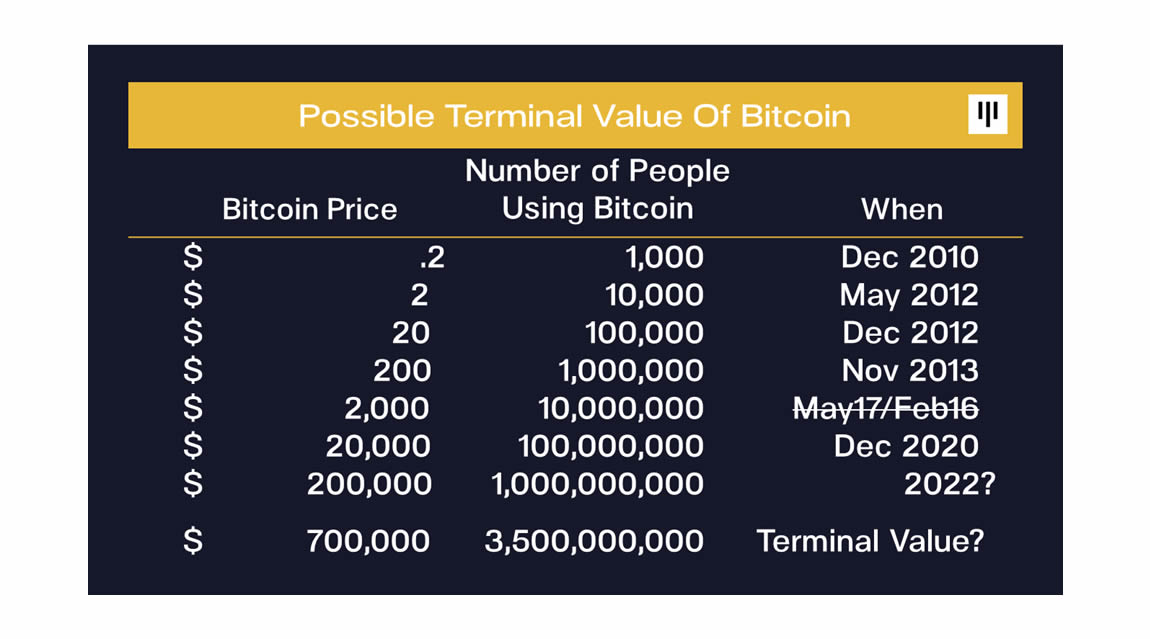 Neutral ATM can see terminal value growing at a high rate as well.  This chart does not mean Bitcoin will cap out at $700K.  We see Bitcoin getting to $1million in late 2025 and well beyond that price in 2029, the next bull run.  Zoom out, place your assymetric bet and proceed accordingly.  Every 1 million new users is $200 in Bitcoin price appreciation.  Please remember, you can start investing just $20 in Bitcoin at Neutral ATM machines.  Or try out OTC Desk when that goes live soon!

Paypal has 30 million users and they just announced sellers on paypal can instantly receive fiat currency when a paypal buyer pays in Bitcoin!  So sellers will be more interested in accepting Bitcoin because they get fiat payed to them instantly by Paypal.  This will help adoption!  Bitcoin price appretiation will do most of the heavy lifting for adoption.  Another catalyst will be further evidence of USD inflation.  In time, this will become clear.  The early adopters will reap the benefits.