Bitcoin was in an ascending wedge and broke down last night for a few hours.  Now it is settling in around $45,400.  A double bottom has formed and the chart looks bullish.  Our frustration, in general is too many customers of Neutral ATM only ask questions about the price of Bitcoin.  They don’t look at overlying Macro Economics.  That is what we are trying to teach.  Zoom out and look at the big picture.  Both in Bitcoin, and in Global Macro Economics.  Yesterday, we mentioned the USD is the largest export of the US Economy.  Below is a chart of GDP share of net export of goods and services.  Since 1960 it has been droping:

The next chart is M2 money stock or money supply in blue.  The red line is reverse repo’s:

Remember reverse repo’s are when the FED buys back treasury bonds in exchange for liquidity for the next day’s transactions for commercial banks.  Also remember, that in the early summer, the FED stopped recording M2 money stock.  So that data is not being updated.  But look at reverse repo’s!  Nearly vertical!

The debasement of the USD is getting steeper as 2021 unfolds.  Last month and early in August we showed charts proving goods and services required to live in the US are up anywhere from 10% to over 100% in 2021.  Now it appears that real inflation, while not being tracked like it was last year, is sprinting closer to 20%, as 2021 moves forward.  The DXY chart is inconclusive.  Click here to see, it is pretty neutral right now, it could break up sharply if and when stocks crash.

A chart of M2 money stock or money supply to USD looks very much like the BTC to USD chart does.  Bitcoin is the one digital asset that is outpacing run away monetary devaluation.  Monetary devaluation is far more dangerous than the MSM leads on that it is!  It will turn $1 million in retirement savings into nothing in 10 years or less.  The purchasing power of retirements all over the world is dropping and the press does not bring it up.  Bitcoin is the life raft.  After that, if you feel you have to diversify, use Art, Gold, Ethereum.  Below is the BTC/USD chart since 2011: 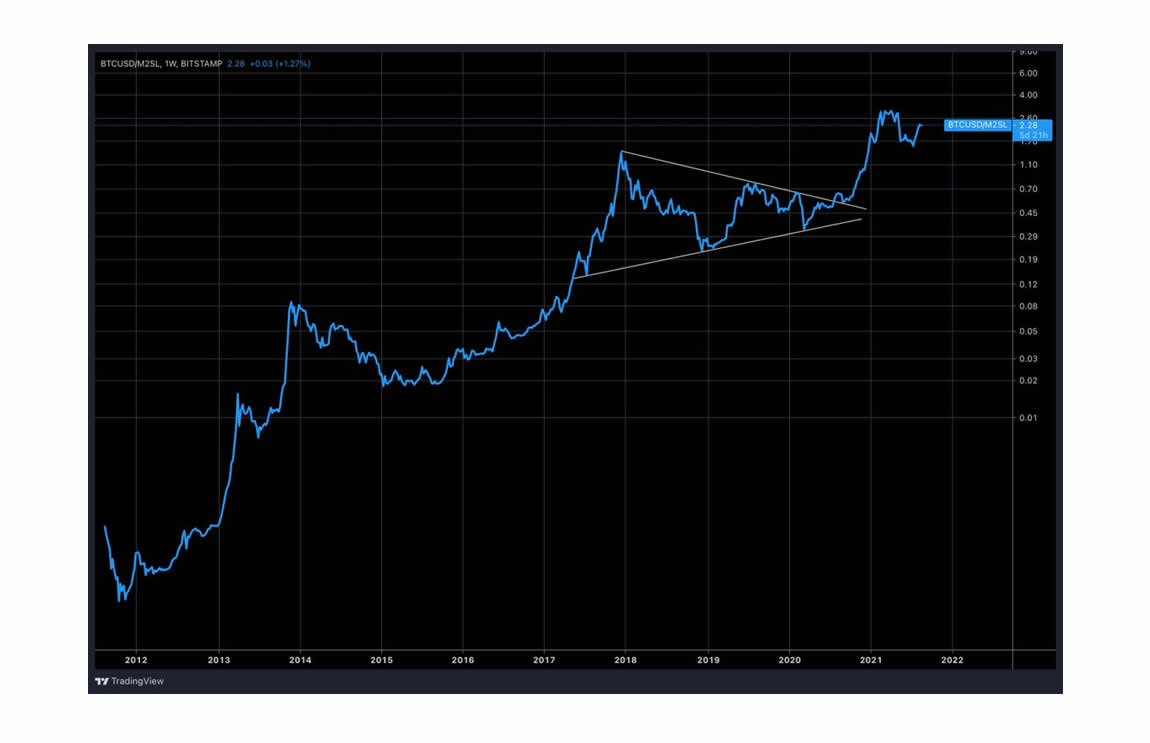 The next chart is our favorite stock to flow chart.  It is not perfect because it does not take into account Metcalfe’s Law.  However, it is a great chart for supply demand and understanding the supply shock of the halving every 4 years.  Look at the 2013 bull run on this chart below.  See how when the second top formed the dots turned red.  In 2021 Bitcoin formed a top at $64,829, dropped by over 50% then orange dots getting closer and closer to the former top.  Now look back at 2013.  The second top rose ABOVE the white line.  Where is the white line for 2021?  $450K or so?  It seems crazy to say, but what if Bitcoin prints the red dots and gets above the white line again?  It could break $500K, $600K, $700K!  You cannot say that is impossible.  It’s in the charts, and supply shocks come in every 210,000 blocks (4 years).  18 to 24 months after every halving the bull run takes the price to new all time highs.  Bitcoin is the life raft: 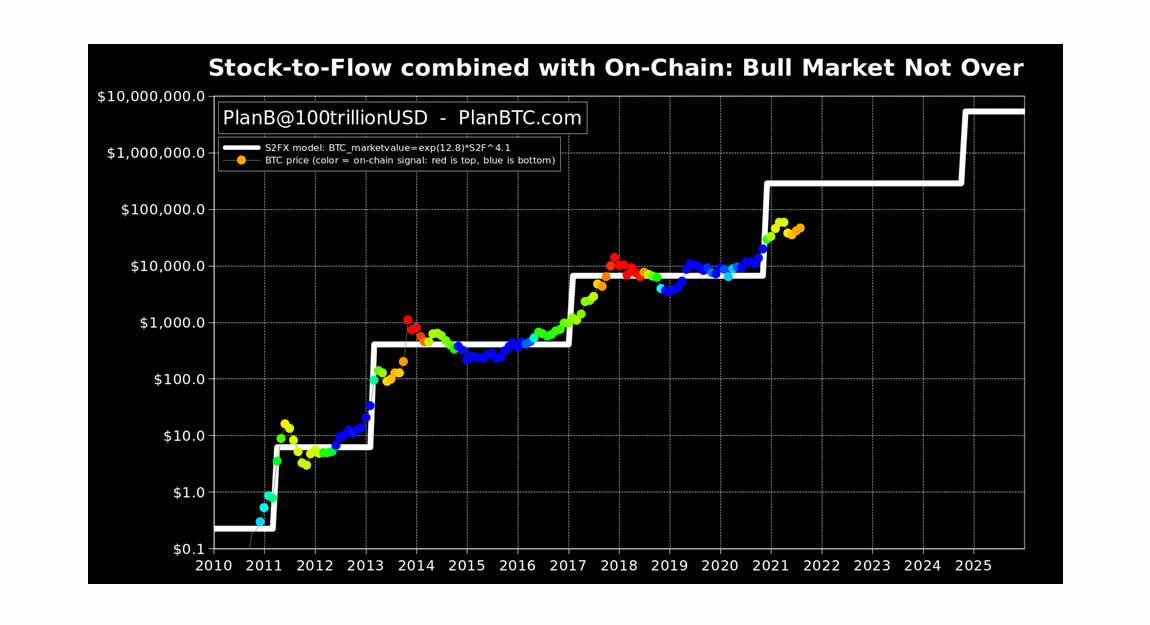 Ethereum is running behind Bitcoin by 4 or 5 years but is on a similar trajectory.  We just don’t like how Ethereum is not decentralized at all.  But, the chart set up looks similar.  We are much more conservative with Ethereum. It is not property like Bitcoin, they are not the same.  We will give it more trust, after that trust is earned. We cannot ignore Cathie Woods statement today either.  That digital wallets are coming for the commercial banking industry!  Digital wallets will replace banks!  The lightning network on the BTC blockchain is a major part of future payment rails for digital wallets.  Ethereum is also part of these payment rails and it will follow Bitcoin.  We do not necessarily see an Ethereum flippening happening anytime soon though.  We trust Bitcoin, Ethereum is up and coming, Gold and Art are also scarce, we trust Art more than Gold as a store of value.  However, the liferaft out of this global monetary debasement will always start and end with Bitcoin, and that is the bottom line!