Today we will first look at global macro then move into where Bitcoin may be going near term.  Velocity of money is a measurement of behavior.  Recent inflation creates a higher velocity of money, because behavior becomes more buy it now, it will be more expensive tomorrow.  Hoarding, especially fuel, energy, ammo, guns, and food.  This behavioral change will eventually increase velocity of money.  How fast money is being spent.  As velocity of money increases, inflation increases.  Throw in the congressional approval of a $2trillion debt ceiling raise in the US.  That is scary for the future.  Donald Trump has warned it is inflation that will rip apart our economy.  Therefore, watch velocity of money: 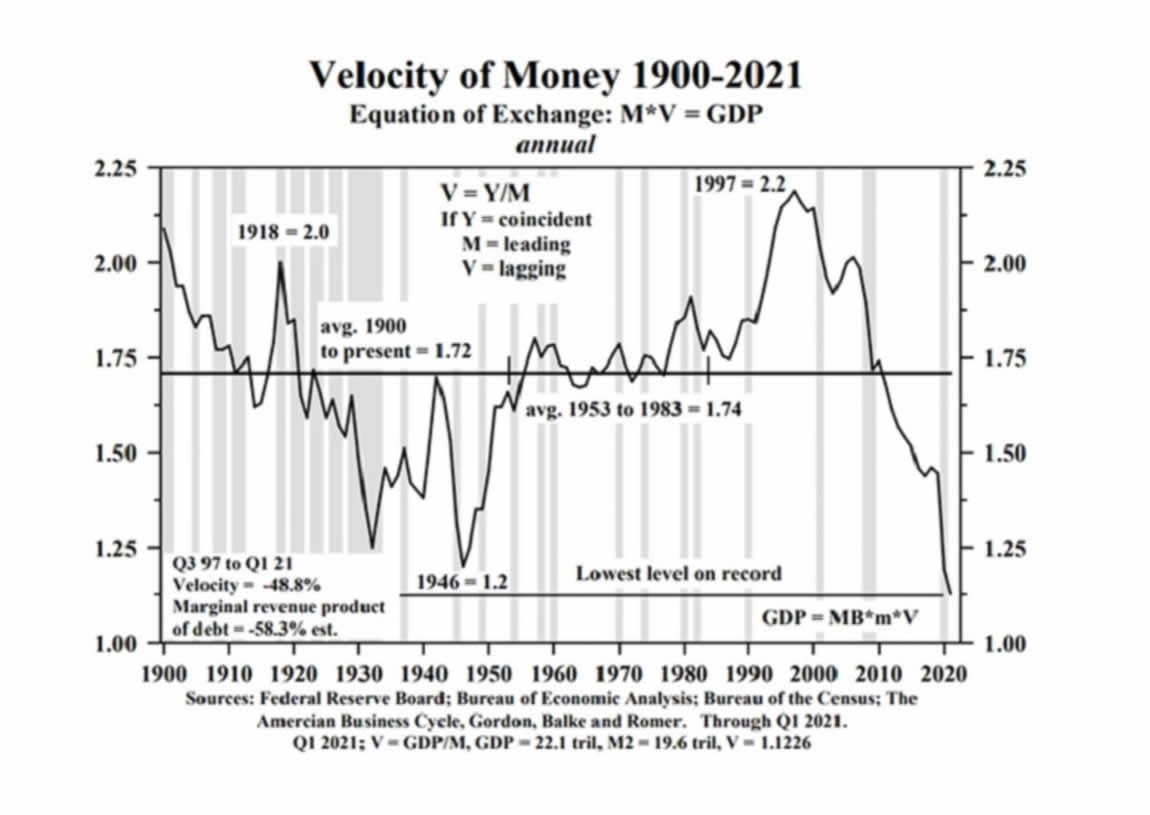 This chart above is a historical perspective of velocity of money.  Here is where it is currently:

Now it is 1.14.  If it gets above 2, like right before the pandemic.  CPI Inflation would be 12+!  CPI was just raised to 6.7 from 6.2.  The more hoarding across the country and the world, the higher velocity of money will go and CPI inflation will follow it up.

In other world news, it is noteworthy that President Putin of Russia and President Modi of India met in New Delhi this week.  They announced they will make all settlements between the two countries in Rubles and Rupees, not USD.  China and Russia are doing this with many settlements already.  This will further devalue the US Dollar!  That is very obvious.  Click here to see the article.

Furthermore, the CEO of Goldman Sachs David Soloman has said the blockchain is important for the economy as a way to further digitize more aspects of the economy.  However, note that the blockchain cannot be rolled back, such that Bitcoin is not included with it.  Scarce digital money with a limit of 21 million coins ever to be produced.  Without Bitcoin, THE BLOCKCHAIN DOES NOT EXIST!  David Soloman also said that monetary and fiscal policy would determine the success of the stock market in the future.  That means the Fed cannot raise rates even if they say they will.  IF they do the whole market will tank.  They are trapped in low rates, and money printing, stock buy backs, to keep the economy alive.  These stock buy backs pump all stocks!  Inflation will keep going up!  There is no other choice.  This is how they keep fiat currency alive, then use the pandemic to reset the economy to a new system.  Yet, that too has already failed.  Central Bank Digital Currency would be the attempted money for this new system.  However, that brings about authoritarianism.  How?  Behavior based digital money.  Short the latest booster or two on your health records, which would be linked to the CBDC?  The Fed could cut off access to your funds until you comply!  This kind of dystopia is not a world anyone wants to live in, much less raise a family in.  There is already mass resistance to a lot of the health intrusion measures in other countries (Austria, Australia, New Zealand, France, UK, and Canada).  It appears in the US as well.  CBDC would make it worse by linking health records into the monetary system.  Since the blockchain cannot be separated from Bitcoin, Bitcoin comes with it.  It is sound money, no government can force more Bitcoin to be created.  Not possible.  It cannot be devalued like fiat currency.  Thus, Neutral ATM believes there will be a world in the future where Bitcoin will be very difficult to find and invest in.  Yet it will be where most of the wealth of the world is stored.  Yes, the futures ETF’s were approved by the SEC first and not the Spot ETF, which could not be manipulated.  We also believe this is why we have seen more frequent dumps, since September, when the first Future’s ETF’s went online.  Eventually, Spot ETF’s will be approved.  This will shake out in the future.

Until then, the charts tell us how healthy Bitcoin is now and give clues where it is going next.  This chart below shows more evidence the breakout will be up not down:

We still see Bitcoin toping out in the $135K to $190K range but it could break $200K easily.  This mid cycle consoliation is very frustrating!  We agree with that.  However, it does not mean the cycle is broken, and Bitcoin is in a bear market now.  In the below chart from a video, we see Bitcoin’s 21 week ema is getting close to the 50 week ema (exponential moving average).  When the two moving averages get close together, (21 week is the purple line, 50 week is the red line on the chart), Bitcoin moves up.

In this chart, we see Bitcoin testing the 50 week ema (green line in this chart).  It has held as support.  $47,500 level is critical to hold.  The second chart below is the NVT and it is still red, bullish.  The third chart below is the RSI and it is bearish right now.  Pay close attention to the fourth chart below.  That is stochastic RSI.  The blue line is attempting to cross the red line, and when or if that happens, bullish!  We must wait and see if there is a bullish cross on the stochastic RSI.  See this chart below:

On the RSI, notice the higher highs and higher lows.  The stochastic RSI bullish cross could turn the RSI bullish.  If that happens RSI would have to get above 94, previous high, to create a higher high and above 95 RSI is typical in bull run cycle tops. See the chart below:

Remember, fear and greed index above 96 and RSI above 92 or 95 are both top indicators.  It can go higher than that even.  The point is, there is a lot more for the charts to reveal which has not happened yet.  Patience, history is unfolding here.  Thanks to crypto crew university and Steve Courtney on these last two charts.  This is not financial advise, however, longterm, and patient holding of Bitcoin wins in the end.  We don’t see a bear market dead ahead, but if that does happen, don’t panic sell.  Global macro is in Bitcoins favor.  The blockchain cannot be unwound from Bitcoin.  They go together.  Velocity of money could drive more inflation, which could do who knows what, to the price of Bitcoin.  The charts keep us honest on where Bitcoin is, global macro keeps us honest on the big picture environment.  Right now the environment favors holding Bitcoin LONGTERM!