Bitcoin liquidity crisis will flush out illiquidity and scams in the market. Inflation will spike again, then what? Bitcoin is

2023 is already starting out with a bang.  Below is Michael Burry’s tweet that inflation will spike again late this year or next year, click here to view on Twitter.

Michael Burry has some credibility since he is an all time successful hedge fund manager.  Keep in mind, when inflation does spike high, it typically takes more than one spike to get there.  This happened in the Weimar Republic in the 1920’s.  See this chart below showing two spikes, and what that did to the Gold price in Weimar Germany at that time: 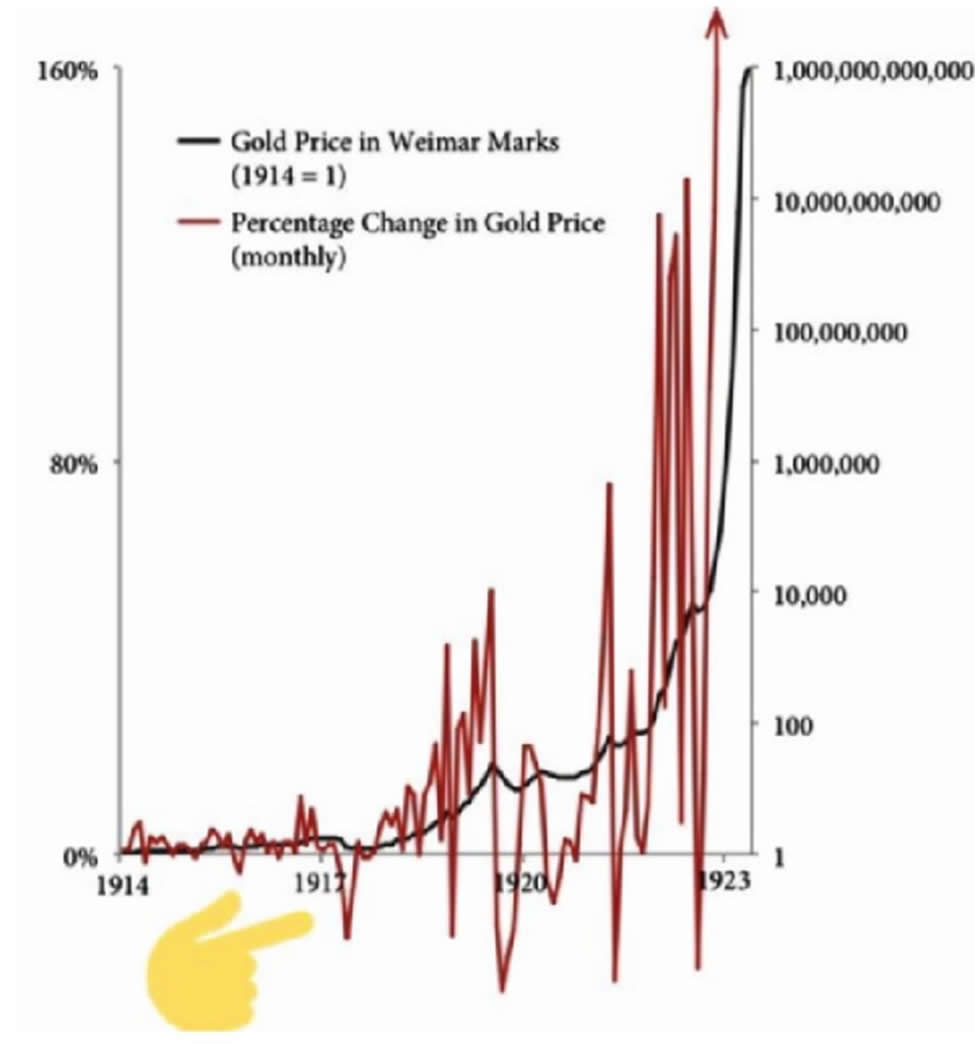 Of course, now we have Bitcoin as the most scarce asset in the world, taking that crown away from Gold in 2020-2021.   Lyn Alden mentioned in the below two charts that inflation spikes in waves before settling at a much higher level as it did between 1940 and 1952.  The total spike in inflation during those years was 90%.  It is evident the US is going through another series or waves of inflation, and this one was not the last wave of inflation we will see.  We agree with this, and in the end.  We agree that real inflation will be much higher in the end, than it is right now.  Therefore, from 2032, or 2034 onward.  Inflation will be very high.  Here are Lyn’s charts: 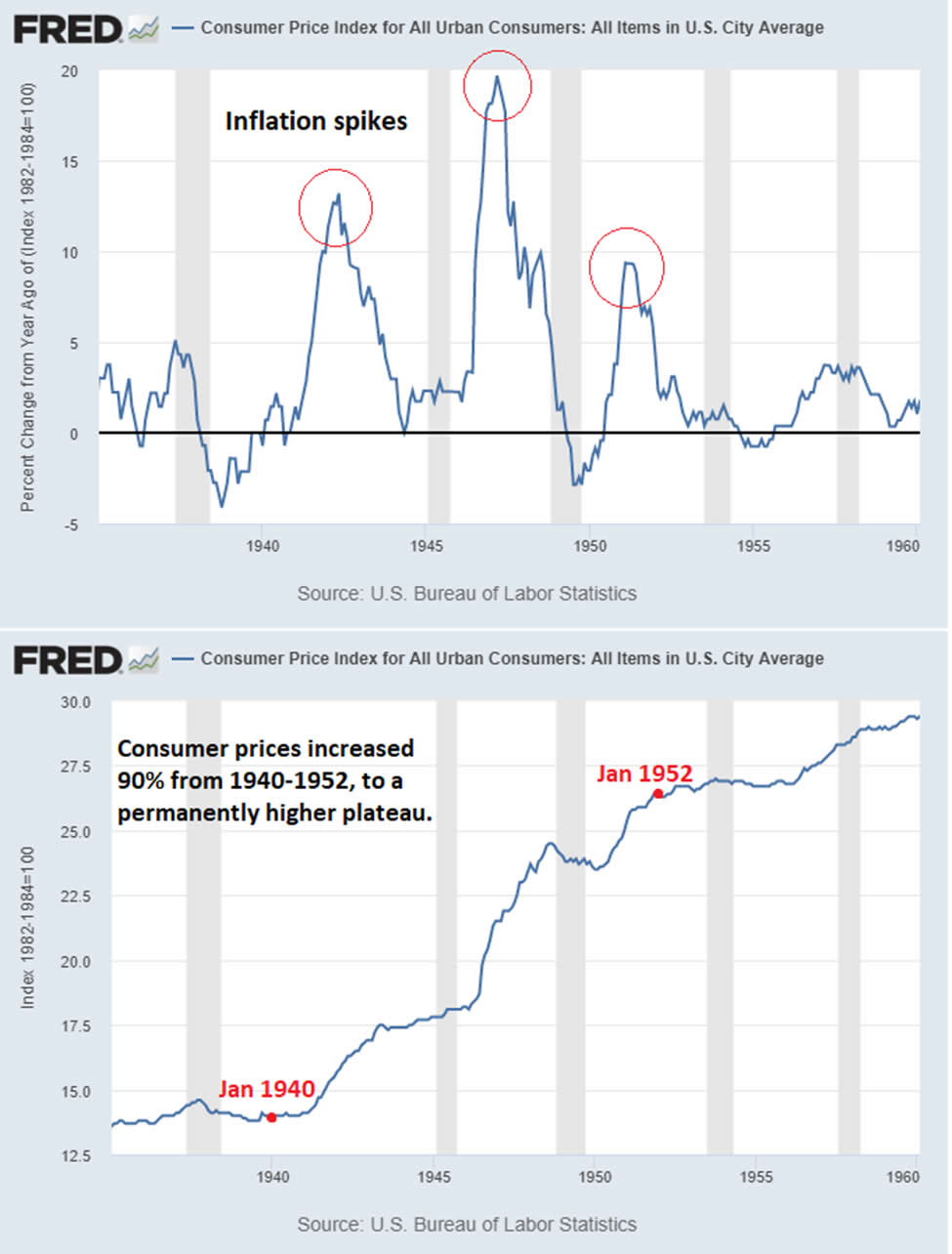 CPI spiked in the 70’s.  Notice the drastic difference in percentages in this chart from the above chart Lyn Alden posted.  The calculation changed in the 80’s and the way CPI is measured, forever changed after that.  Also, this chart measures percent of change year over year.  The circle points to the fact that like the 70’s, inflation spiked, is coming down, and is likely to spike again.  Possibly late 23’ or 24’: 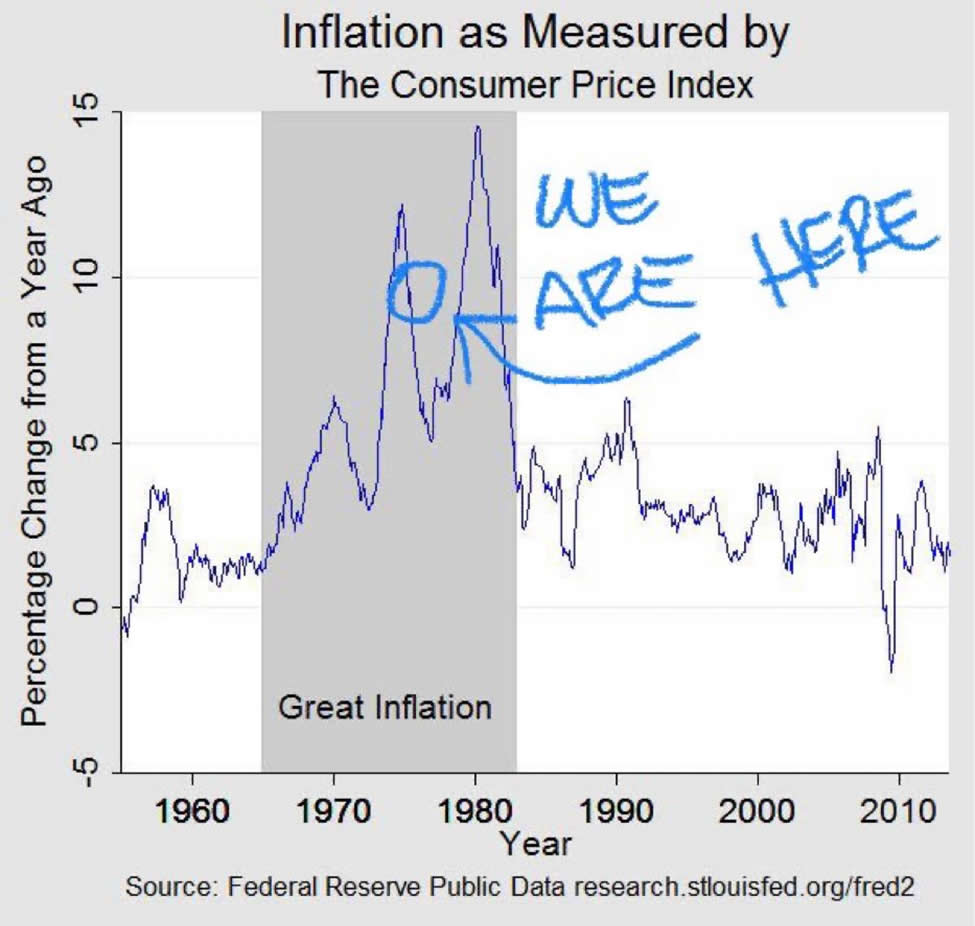 Remember, the Bitcoin halving is March 2024 or so.  If inflation is spiking again at that time, which is likely.  The next Bitcoin bull run in 2024, will be a big one.  Also, keep in mind, the FTX situation, and possible future issues involving liquidity at Binance, and Grayscale Bitcoin Trust could further flush out over leverage in the Bitcoin space.  This flushing out process has to happen for future bull runs to reach their true potential.  Now that we know, FTX never owned any Bitcoin yet they sold thousands of Bitcoin.  That would explain why the last bull run topped out just below $70K, instead of the $130K plus that we predicted in 2021.  We have to keep in mind the psychology involved in Bitcoin’s impact.  By trusting it, and keeping Bitcoin keys in possession, we do not have to trust third parties.  We hold our own keys.

Lawrence Lepard had this impassioned video about Bitcoin and this exact impact, click here to view on Twitter.

Granata Consulting put it this way, in regards to BRICS and how this reserve currency will affect the USD, Gold, and Bitcoin:

“BRICS is adding new nations to this block:  Saudi Arabia and Iran are particularly important.  The former economic the latter adds military ties.  Tip of the iceberg: the value of the USD, Bitcoin, and Gold will be affected.”

Bitopia in the below tweet concludes BRICS will end up with two choices; Bitcoin or the US Dollar.  They cannot choose the US Dollar, click here to view on Twitter.

Which explains why the White House was caught meeting with Sam Bankman Fried 4 times privately.  The White House press secretary has since been obfuscating what those meetings were actually about: 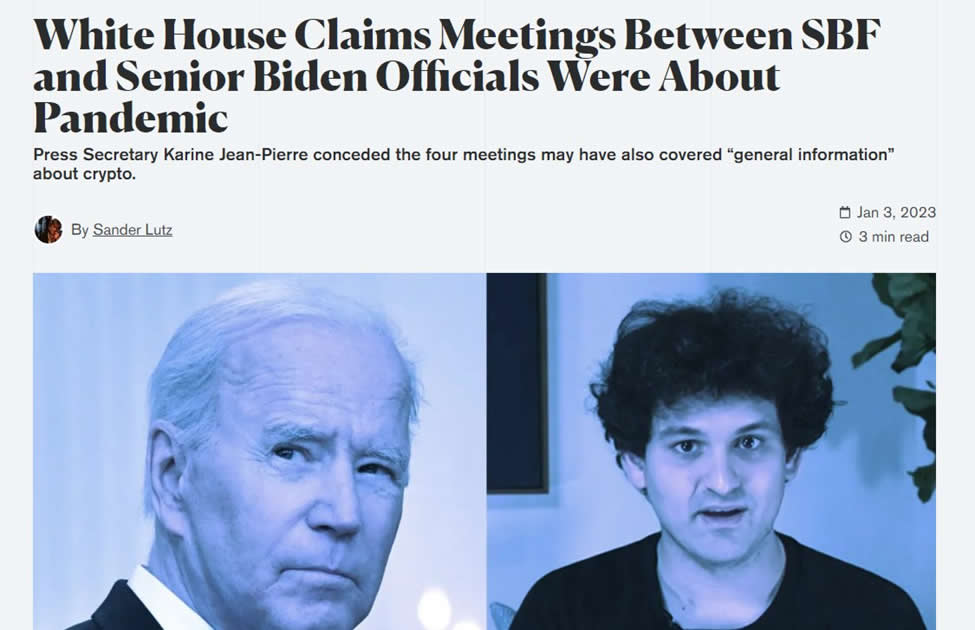 A sitting president meeting with the Bernie Maddof of the Crypto Industry who sold approximately $1.4 Billion worth of “paper Bitcoin”.  Investors into FTX thought they were buying Bitcoin, yet FTX never bought it, and dumped that money into FTT.  FTX’s air coin token.  Obviously, this affected the price of Bitcoin since November 2021 when it hit the all time high of $69K.

This video from @Croesus_BTC discusses how 80K BTC, or $1.4 Billion in value of Bitcoin was sold, but the buyers never really owned it.  This proves that Bitcoin price was suppressed drastically over the last year plus by FTX.  In addition, who else practiced this?  Barry Silber at Grayscale Bitcoin Trust?  CZ at Binance?  We don’t know all the answers yet.  Bitcoin was created to be a peer to peer transfer of digital energy on a blockchain.  It was designed to have no peers, no human control.  Even that has been corrupted, sadly.  Yet, all is not lost.  As this unwinds, as more is learned about what happened with fake Bitcoin being sold to meet demand.  What will these revelations do to the price, and value of Bitcoin?  As this liquidity that was never applied to Bitcoin, but should have been, is wiped out of the system.  Bitcoin is more valuable, not less valuable.  Demand was so high, Bitcoin was sold by “trusted” third parties who never owned it.  Once this liquidity is cleaned out, then what?  Demand will come back, especially as inflation comes back.  Perhaps this time, demand will be met with the stipulation that the owner of the Bitcoin holds the keys?  That is the ONLY way to ensure the Bitcoin is yours!  We are not financial advisors and this is not financial advice.  Bitcoin was scammed, fake Bitcoin was sold.  That does NOT mean Bitcoin itself is fake.  It means the investor MUST ensure they hold the keys to the Bitcoin they just bought!  No more leaving it on exchanges, or getting some great return for rehypothecating your Bitcoin!  Hold your own keys!  Buy KYC from Neutral ATM, and get it on an offline wallet:

When most or all Bitcoin holders take it offline, only miners production can meet demand for Bitcoin.  Then, see what happens to the price!  As Roger Daltry once said “ I won’t get fooled again”!