Bitcoin is too Expensive to Buy Right Now??

We wrote six blogs in a row in February that one should not worry about the price of Bitcoin.

You can invest in Bitcoin for $20 at our Bitcoin ATM machines.  A satoshi is 1/100 millionth of a Bitcoin.  We call it stacking Sats.  Short for Satoshis.  So, you do NOT have to buy an entire Bitcoin and most importantly, you CAN trust Bitcoin long term.  It will hit $1million per coin in late 2025.

Many are concerned that Bitcoin is too expensive to buy right now.  Well, that is a misnomer.  As inflation goes up, up, and up.  Bitcon supply goes down, down, and down.  See this chart below, regarding the issuance of Bitcoin, which is cut by 50% every 210K blocks created: 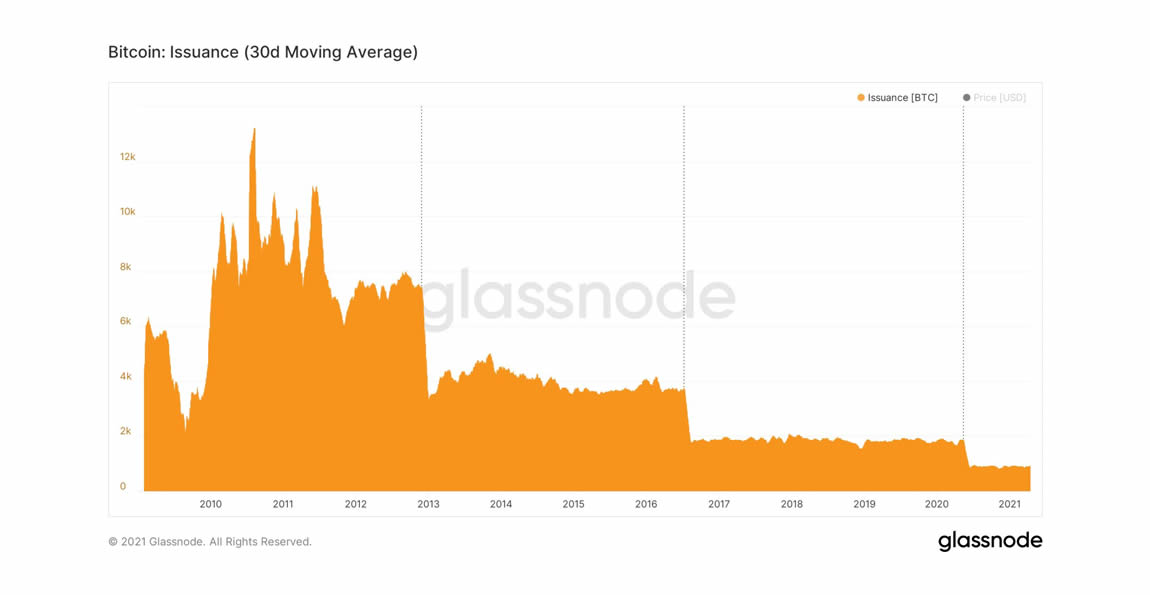 Blocks take 10 minutes on average.  Since the reward is halved every 210K blocks, Bitcoin is deflationary in an inflationary world.  Money supply has never ballooned like it is right now.  Balooning money supply weakens the value of the US dollar.  This means a dollar in 2021, will go as far as $0.88 will, in 2022.  Every year, the value in your savings in USD is dropping 10% to 14% depending on your geography.  Bitcoin has appreciated over 800% in the last year.  It averages 201% appreciation going back to January 2009.  That is an average!  See the next chart as an example of ballooning money supply: 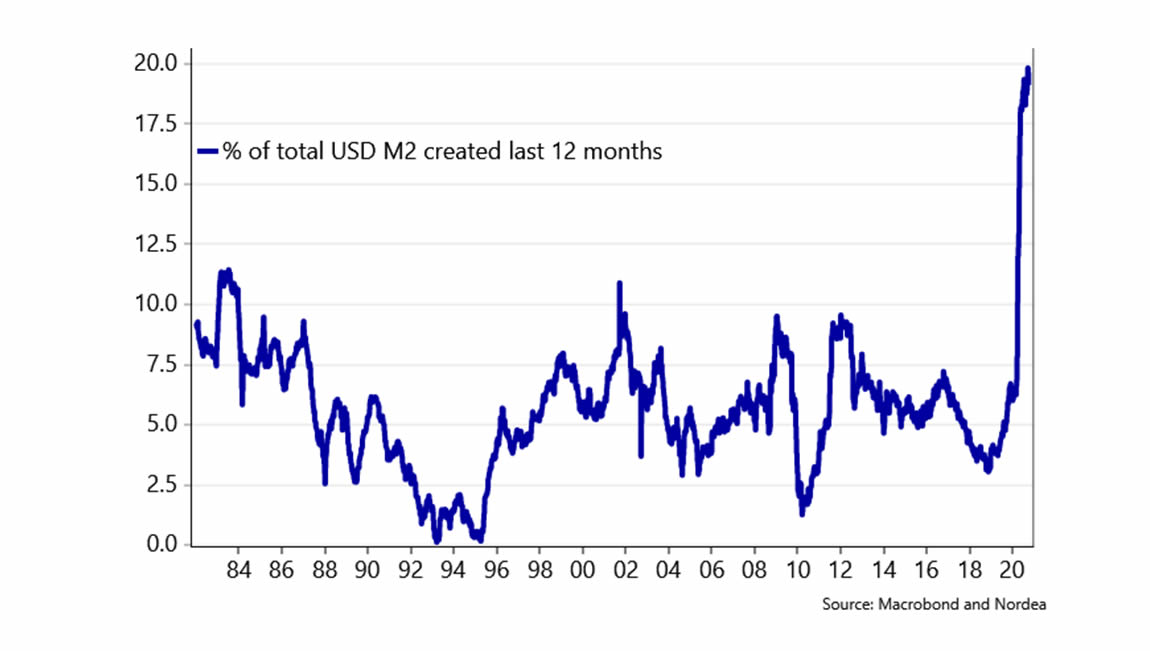 The Fed is printing $120billion + per month!  Then you can add stimulus packages on top of that.  See a quote from Tim Draper one of the largest Bitcoin holders from a Bitcoin conference in Texas this week:

This loss of faith, the shutting down of M1 and M2 money supply tracking on the www.FRED.com website.  The shutting down of the chapwood index website, which tracked real inflation.  While at the same time, inflation is going rampant.  This will lose the faith of the people!  Inflation is beginning to get obvious.  Gasoline, Diesel, lumber, food.  Here is a simple example: 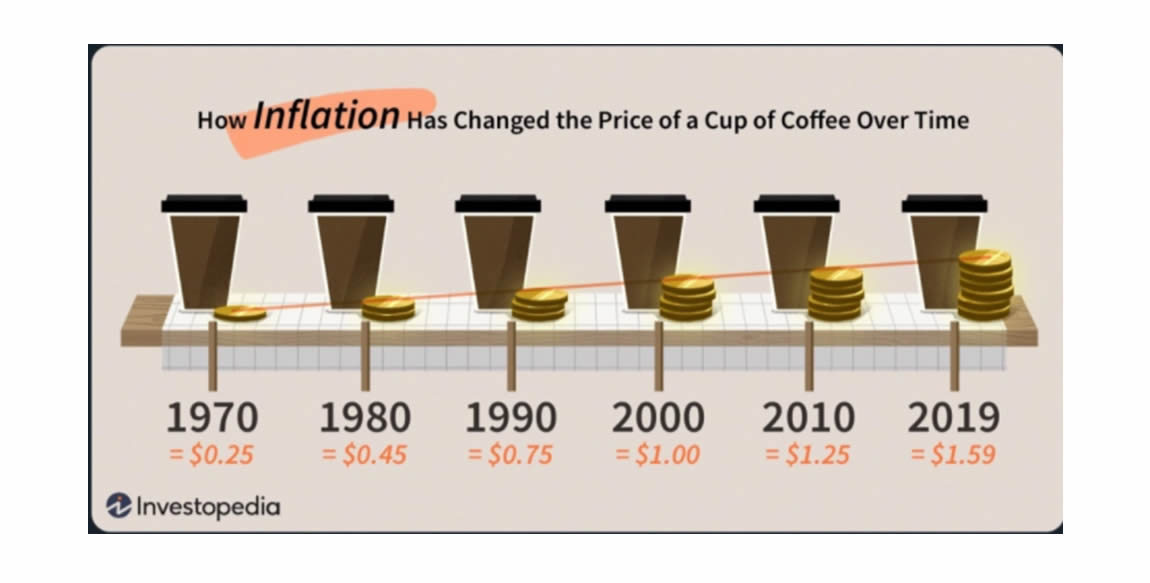 Bitcoin is provably scarce, and is 100% provably decentralized.  It cannot be confiscated.  The Fed is supposedly looking at Bitcoin as an alternative to the dollar, and to compete with China who recently released their digital yuan (CBDC).  Adoption of Bitcoin is at all time highs.  Many companies own it on their balance sheet instead of USD, including Tesla, Square, and Microstrategy, click here to view.

We know Bitcoin dumped on Saturday night (-15% in one hour) and we really don’t care.  Buy the dip and get ready for the next leg up of this bull run!  It is far from over!  The chart shows the Bitcoin dump found a bottom on an upward sloping trend line.  This week will show us where Bitcoin will be heading short term.  It appears to be staying in a channel, bouncing up and down off of higher lows like this chart shows: 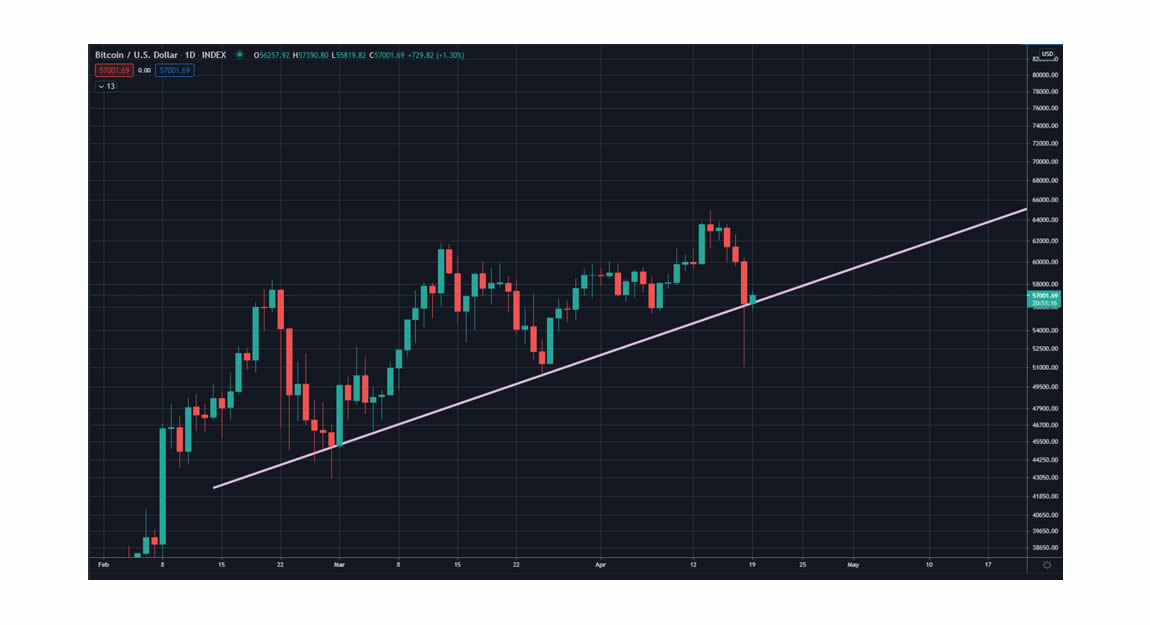 Higher lows are important to watch for and Bitcoin has printed higher lows since the dump Saturday night.  We know there was a power outage in China that lasted hours and 30% of the mining capacity in the Xinjiang province was shut down temporarily.  This slowed processing speeds on the blockchain, measured in exehashes.

Xinjiang lost -60 EH/s (Exehashes per second).  This next chart shows what a sharp reduction in hash rate (yellow line) does to Bitcoin price action:

Bitcoin drove back up from $50K to $57K and is now at $55K.  The chart appears to be printing a W.  That is always bullish if it completes that in the charts today.  Bitcoin may very well get back to $60K range this week, but it is looking like we will have to, once again, wait longer for a full Bitcoin breakout.  May appears to be the month Bitcoin starts to really turn bullish again.  We have to watch it unfold in the charts.  We do know it will turn bullish again, there is too much proof and history behind that outcome at this point.

However, in the meantime the global macro outlook could not be more bullish for Bitcoin.  The DXY (USD index) is dropping towards 90 again.  If the DXY keeps trending in that direction, and gets into the 90 range on the index.  This will be another catalyst for the much anticipated Bitcoin breakout.  See the chart below: 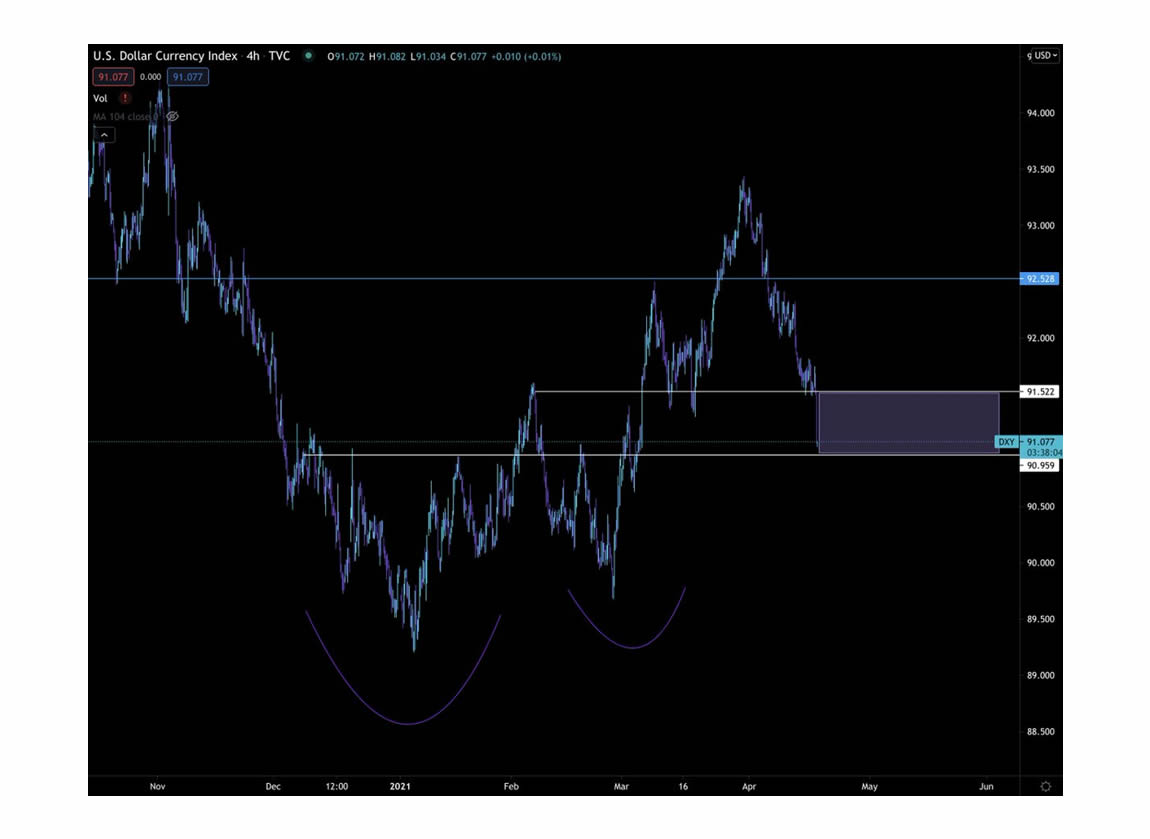 In conclusion, stay unemotional, buy this dip in the price and keep holding Bitcoin for the last leg or two of this bull run 2021!  It will be exciting.